Aloha from Lahaina Harbor, Maui, Hawaii. The marlin bite recently started to slow down but there are still plenty of mahis around. The following photos show some of Start Me Up's anglers and their catch from the past few weeks. A Marlin Magic tube was the hottest lure of the day, drawing 2 blue marlin strikes. The fish that stuck weighed in at 374 lbs. These quick learners caught their own live bait and then cashed some in for 8 mahis. Chrome jets were the key to success in catching this ono. These lucky anglers scored twice. First, there were no other boats at the buoy and second, the buoy was loaded with mahis. Getting up early and going to a FAD paid off. The FADs were slow, but trolling produced a 200 lb blue marlin. That's the fish of a lifetime for a wahine angler from Minnesota. The marlin were biting like crazy for these anglers. They landed a 360 lb blue marlin, tagged and released a smaller one, and broke hook on another big fish. How about a stringer (and bucket) of mahis? Trolling along the coast of Molokai produced a few nice onos. A couple more onos came from Molokai the next day. These boys were enthralled by their kawakawa. Fishermen are often rewarded for checking out a different area. This group found some action a FAD, catching mahi, tuna, and releasing a shark. Captain Mike on the Start Me Up Too snapped this photo of a blue marlin prior to its release. The lure is a Marlinstar Tomahawk. Dragging baits around the inside pinnacles results in a variety of catches, such as barracuda.


Thanks for taking a look at this Start Me Up fishing report. Tight lines.

ono poke please! Thanks for the report we put you on the front page. 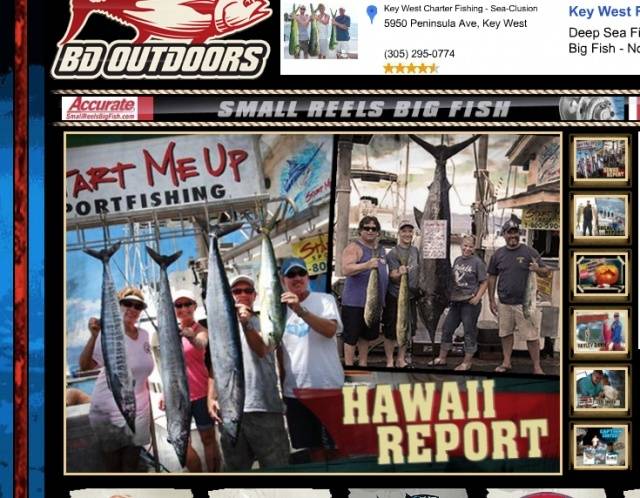 awesome! i may be taking my wife there next may and like to sneek a fishing trip in. do you recamend a guide? also whats the cost? also not being summer are wahoo around?thanks lor the input
D

sorry for the quick rush my typings horrible, i see your name but 1 guide?

denis said:
sorry for the quick rush my typings horrible, i see your name but 1 guide?
Click to expand...