Islands Fish of a Lifetime on Fin Fetish

I eat up the first-hand fish reports on this site on the daily so just wanted to return the favor and share some details from a great trip last week. On the night of May 5th, our group of six friends with varying levels of fishing experience departed on an overnight trip aboard the 31' Bertram Fin Fetish. This was my first time fishing with Capt. Brian Norris, his operation is located in Marina del Rey. The day of our trip a few of his code boats fished the closer islands without much luck so we were going to run the distance and try our luck at the outer Channel Islands WSB bite that had been going on.

We traversed through the night and made our way to the squid grounds to make some live bait. It took a while for the squid to float well, we made less than 50 pieces over the first few hours. We motored over to the area we'd start fishing at, and fortunately the squidding was even better in this area. An hour or two before grey light, the squirts circled the boat by the thousand and we loaded up more than enough for our day. It crept towards the morning hours, and we found ourselves in a zone surrounded by other similar private boats and some of the Oxnard/Ventura sportboats.

Still in the dark, we set down our lines. Live squid on dropper loop. Nothing much to speak of in the real early hours until about 7AM. Our code boat, just a few dozen yards away from us, landed a huge halibut. This was the first fish we saw landed amongst the flotilla we were fishing with. About 30 minutes later, Fin Fetish got our first bite and I was the lucky one standing in front of the rod, nice rod holder hook set. I picked it up and got immediate head shakes and drag pulls, the right kind- then... it fought like a bat ray relentlessly sticking to the bottom. The rod that got bit had light line ... 25lb mono ... and it was clearly a large fish on the other end. Slowly but surely, we broke the fish's will and it started coming up steadily. Norris exclaimed, "it's a giant halibut!" once it got to color. Then he got a clean gaff shot through the gill area and the flat bass was welcomed aboard. We all freaked out. It was easily in the 50-lb class and probably the single most significant fish catch of my life. My PB went from 12lbs to over 50. Crazy. 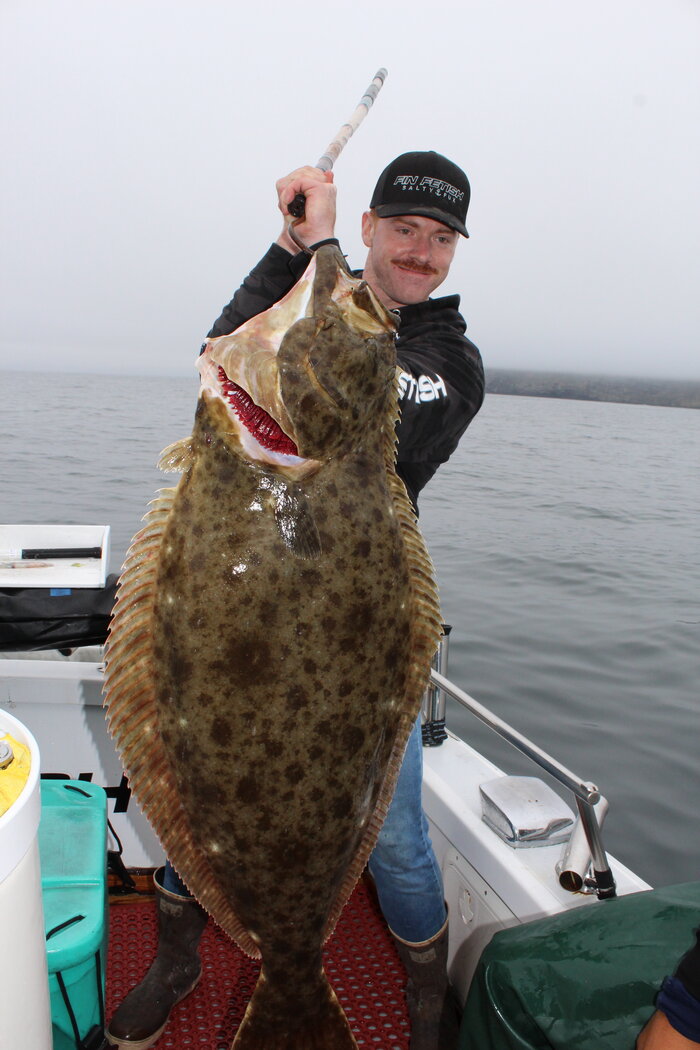 Those two halibut were the only fish we saw landed in the first few morning hours. The fleet in our zone thinned out from 30 boats to 15. Norris told us based on the two fish caught that sticking it out in this zone would be our best option. We continued to fish in serious mode resetting baits occasionally. At about 9AM, we got our second bite almost immediately after resetting one of the rigs. This rod had heavier string, 50-lb., and my friend Anthony Cannuli of Sav On Tackle was the man behind the rod. Norris quickly said, "This is a good Seabass. At least 30lbs." Anthony made quick work of the WSB and it ended up being much larger than 30 lbs. Beyond that.. proportionately it was the fattest seabass any of us had ever seen in person, photos, or otherwise. Estimated 65lbs and 35-40" in girth (short and stubby!). Again, crazy. 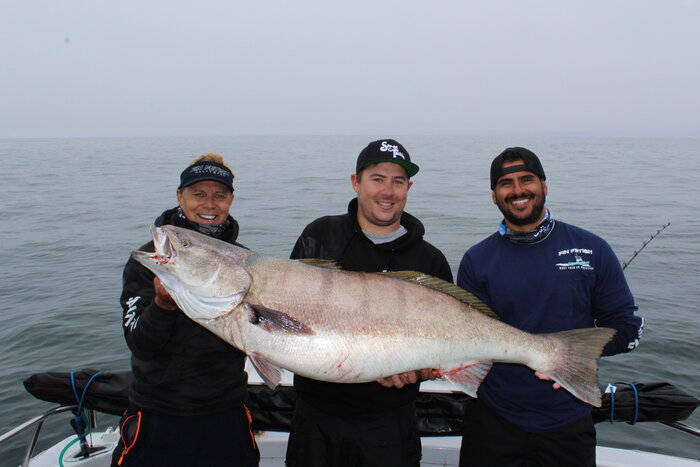 No more bites until 11AM had us considering our options of doing some deep drops for cod, halibut drifting etc. Before we got too far in our considerations, our code boat who caught the other huge halibut in the morning had moved only about a mile from us and hailed us on the radio. They told us to get our butts over there because the seabass were biting full speed. Norris motored us over and marked the fish and told us to drop our lines, NOW! Everybody aboard hooked up. I'd never caught a seabass before this trip so I didn't know exactly what to expect, their bites are soft and it was a relatively challenging fish to hook in my opinion. Nice fight too! I took a handoff bite and welcomed the croaker aboard, then made short work of another on my own rig. Both of these fish were 15-20lbs. Within 15 minutes, we hit boat limits of WSB and motored away and left them biting. SWEET! Checked WSB off the list along and so did several others onboard. We'd then re-rig some rods to get some rockfish on the boat; not that we needed to with all the gamefish we already collected.. 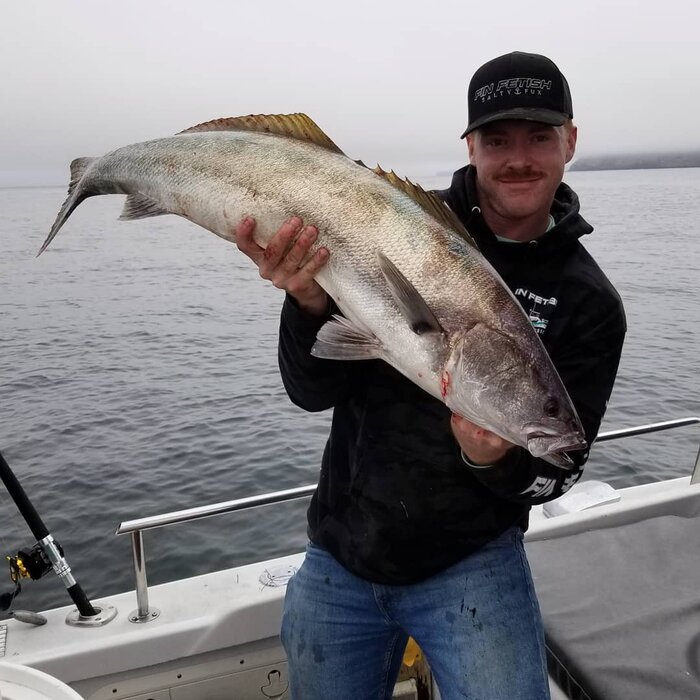 In any case we fished the cod in somewhat shallow water from 200-350. I got to use an electric reel for the first time ever which honestly was bad ass and felt like playing video games and fishing at the same time. Got a "just-short" blue ling on the electric gear and switched over to my normal stuff. Proceeded download on quality reds, chucks, bocas. Fish from 2-6 lbs., tons of fun. We started our long trek home around 1:30pm and basked in our glory of the day.. 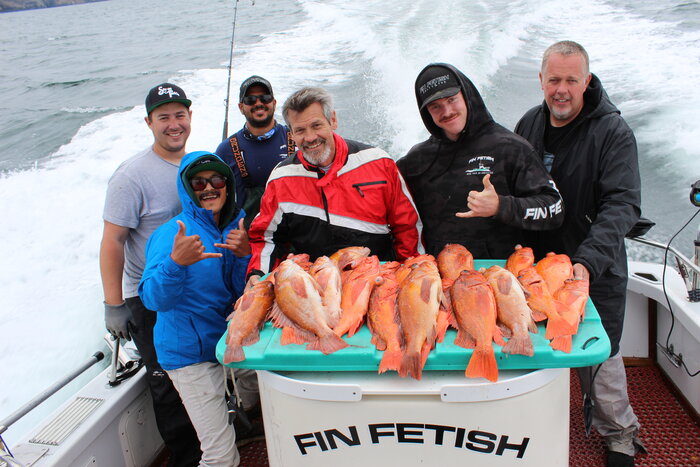 If you made it this far in the report thanks for checking this out! Also check out Fin Fetish if you're looking for a 6-pack in LA area. Without a doubt, we were successful wholly due to his knowledge of the Channel Islands, decision making, and well-oiled Sportfishing program. I know this report was mostly just sharing the experience so if you have any questions on our techniques or anything else I'll do my best to answer them. 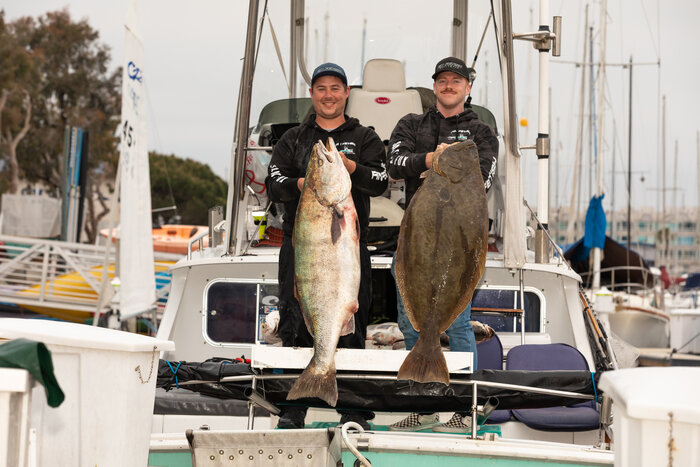 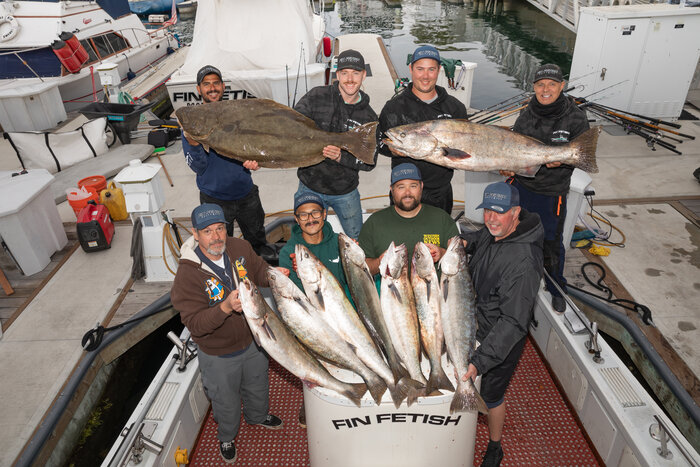 Way to go on some great eating species. Hard to decide which is best amongst seabass, butts or lings. Too bad the ling came up short, they are great Sashimi style.

Thanks for the report.
Toggle signature

Congrats on the HAWGS. Hell of a fish.
Reactions: John Stidman
Upvote 1

I give my sincerest thanks to all the cops that protect us from criminals
Reactions: John Stidman
Upvote 1

Those two fish are wall hangers for sure--absolute slugs. Thanks for sharing (he muttered jealously, haha)!

A couple of BEASTS! Great report and pics and NICE FISH!

Thanks for sharing info. I too read these reports daily and am looking forward to putting up info on where I hit gold. Congrats on the PB halibut and the WSB limit. Great to see some good reports hitting this board....the season is shaping up nicely!
Reactions: Jeff Hannah
Upvote 0

Captain Brian is the man!
Upvote 0

Hell of a fucking trip
Upvote 0

Wow! Brute halibut...
Toggle signature
"When beholding the tranquil beauty and brilliancy of the oceans skin, one forgets the tiger heart that pants beneath it; and would not willingly remember that this velvet paw but conceals a remorseless fang." H.M.
Upvote 0
P

Brother....will be difficult ....in your entire fishing career.... to top that "Stellar" day. Huge fish. Right place at the right time. AND YOU GOT PICTURES!! Great job....great write up....even better picts.

You'll be telling your grandkids about that trip....
Upvote 0

Congratulations on your PB.
That’s a hell of a fish there
Toggle signature
It ain’t to godam bukooo
Upvote 0
Show hidden low quality content
You must log in or register to reply here.