First Trip on the RP part 3 wrap up

Part 3: Wahoo in the middle of no where.

A couple + days after heading to Socorro we had a blind jig strike a few hours before returning to the buffer zone. The crew found the nearby source, a floating piece of plywood. Turned out to be a homemade FAD with several layers of plywood dangling below. We pulled 68 small (very small) wahoo and a couple nice ones too off the FAD. We interred the Buffer Zone just after midnight then made bait. Not much sleep that night.

Sharks were thick and aggressive the following morning. I hooked two tuna on the kite, including a real nice one that the sharks ate. I hate the feel of sharks pounding on a nice tuna. I have only two of the ten 20/0 hooks I started with. The compartment in my hook box that held 7/0 circle hooks also went from full to two. The majority of flylined baits became shark food and my hooks and leaders needed replaced often. My new learned tactic was to button down the drag and do my best to get the shark to cut themselves off, worked sometimes but not always. We headed to hurricane bank in hope of less "sharky conditions".

Hurricane Bank was not less sharky. In fact sharks plagued us for the rest of the trip. I managed 2 more wahoo on a 200 size brass and green raider. I think the color "fast" was more the key than the actual color. Rich pointed out to me that different types of jigs work best at different speeds, one of many learning experiences of the trip. The sharks were so bad that we headed back to the Buffer Zone.

After the long 18 hour boat ride back to the Buffer Zone we only had a day and a morning left to fish. There were a few nice fish caught that day, highlighted by Holly Mackerels cow and Harry's 186 but mostly it was sharks joined now by the porpoise. I did get a few of the 30-60lb fish that first evening, my largest of the day was a 72lb that ate a wahoo jig. I was glad I was using my HXJ Raptor on that one. The last morning I just fed the locals (I hate sharks and porpoise are not on my "cute" list any longer).

It was a frustrating trip, I managed about a dozen tuna, most were under 40lbs, only three were 100 to 160. I did get six Wahoo but they were small (108lbs total weight).

The regulars in the group said, this was the worst fishing they could remember, they are used to plugging the boat and having 20+ cow days. Just as on the 17 day I took on the Shogun last year, I learned a lot and had considerable help and advice. I've been fishing a long time but find I'm always learning something new. It would be hard to single anyone person out because just about everyone was helpful, but a special thanks to Jeff, Rich, John, and Mike. I even helped a couple people myself.

The crew made the trip. If you want entertainment go watch Captain Roy on top of the bait tank (how does he come up with this stuff). Even though fishing was not great, I met some new friends and enjoyed having such a great crew. 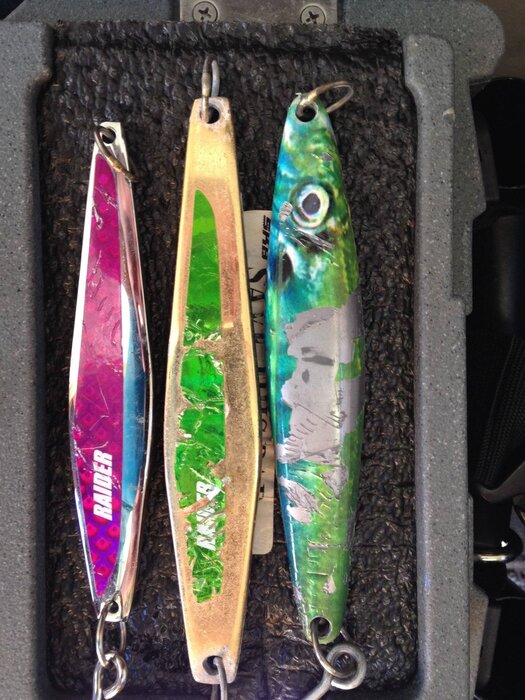 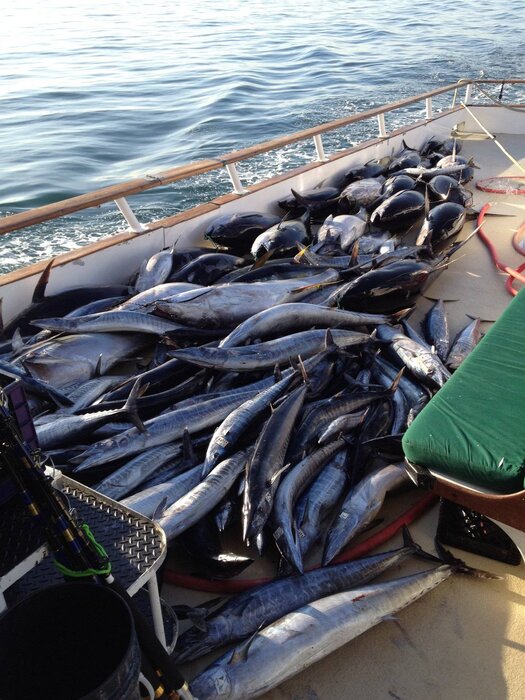 Expand signature
I retired, now I have less time...

Thanks for the detailed report Rick! Sounds like a tough trip with lots of learning opportunities. Appreciate the details and you taking the time to share! You filled up your Karma bucket so now you are due!!!
Reactions: Olddog8

Great write up. Thank you for sharing! Sounded like a very challenging trip for sure.
Reactions: Olddog8

Boat
Sold the boat, now I just rent a stateroom on the EXCEL

Glad you got to get out Rick. Thanks for the report.
Sharks suck ass. I've been robbed by them plenty.
On a positive note, if you consider all the shark pulling you got to do, you can say you caught a "ton" of fish. Albeit, not the target species.
Expand signature
- taking "That Guy" to a whole new level since 1966
Reactions: Olddog8
J

It was good fishing with you. Maybe next year(if I make it) will be better. See you then The good Jeff
Reactions: Olddog8

"If you want entertainment go watch Captain Roy on top of the bait tank (how does he come up with this stuff)."

Ain't that the truth...he is a classic for sure. Nice write up...thanks for sharing.
Reactions: Olddog8

jbgandolf said:
It was good fishing with you. Maybe next year(if I make it) will be better. See you then The good Jeff
Click to expand...

Yes, it was good fishing with you, if not next year, the year after.
Expand signature
I retired, now I have less time...

Philligan said:
"If you want entertainment go watch Captain Roy on top of the bait tank (how does he come up with this stuff)."

Ain't that the truth...he is a classic for sure. Nice write up...thanks for sharing.
Click to expand...

If he was awake, he was talking and never the same thing twice. He was a non stop crack-up. Sometimes I didn't know if I should laugh or pull harder. He may crack jokes in his sleep too, you'd have to ask the rest of the crew.
Expand signature
I retired, now I have less time...