It was time for our annual Finger Bankin trip on the Jihad. Ali and I looked at the weather and decided to go on Thursday 12/29. Rory from Traeger joined us and made some of the best Pollo Asada I've ever had the pleasure of eating, Mexico included, on his Traeger. Freaking epic! Thanks Rory.

The weather was simple unreal. 75, sheet glass calm..little to no swell. Never ever gets old being on a boat in December in that kind of weather.

We really like to target bigger lings and reds of this trip so the first order of the day was making macs. We found nothing in the bay after several spots so we headed down to the IB Flats were there was all the macs you could want but they were all tiny 3" baits no matter how many different schools we tried. With enough bait in the tank and unable to find bigger macs we decided to head down to the bank.


On the way down about 5 miles short of the bank we came up on a ton of bait birds etc... we slowed down to see if metered any YT. We didn't but found some new rocks in 280' and decided to give those a whirl before heading down the bank.

Rory and I started with jigs and it was instant. Rory caught one of the better Chucklheads I've seen on a mint 6x. We continued to catch Chuckleheads on the jigs 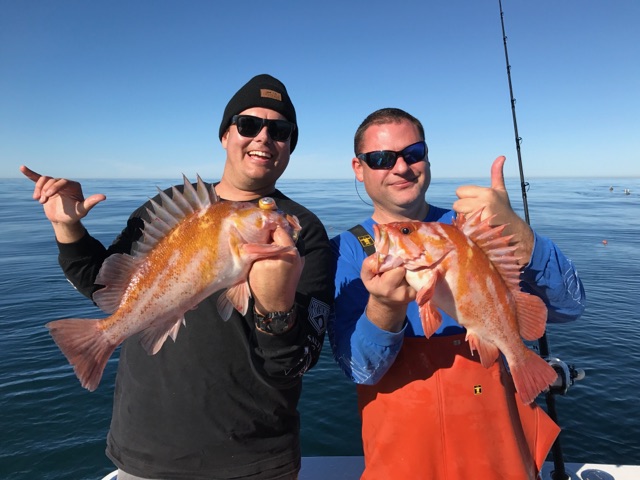 
After a few drifts we headed to the bank. 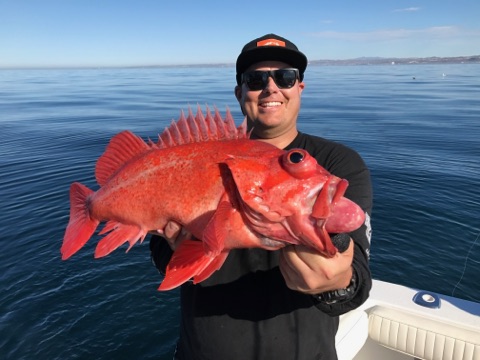 This continued for the rest of the day. The grade of the reds was awesome. We did get some ling nothing special. We had two monsters that we got half way up only to have them charge the bottom and break us off. 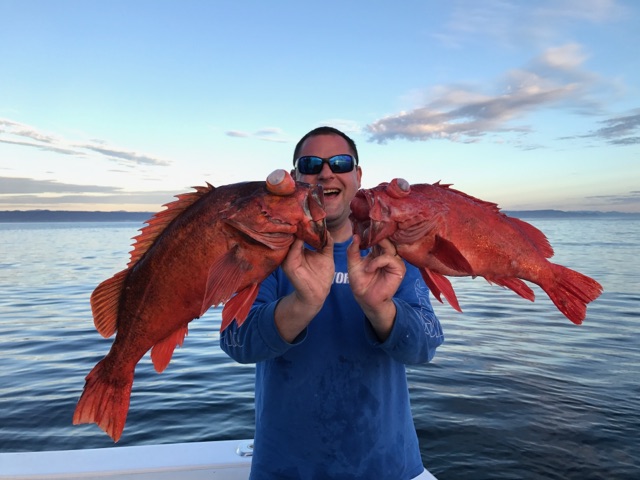 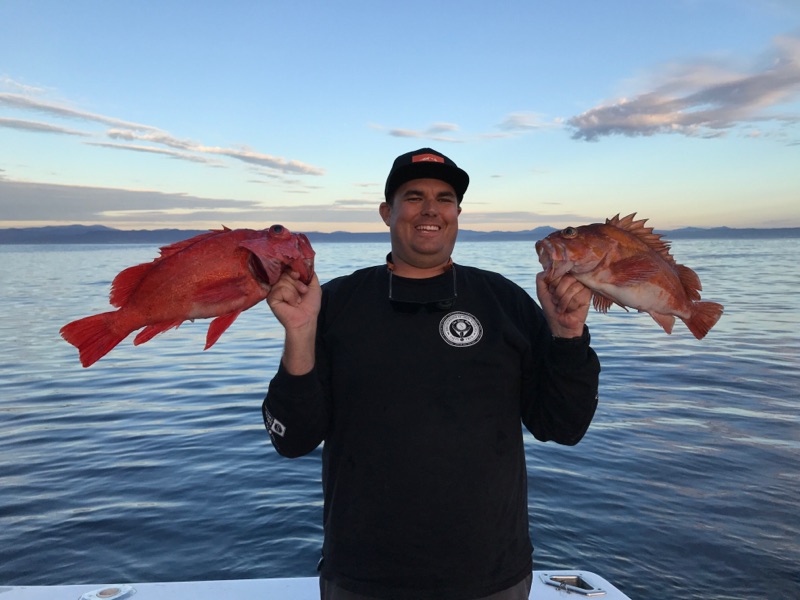 The fish continued to respond to the jigs WAY better than bait almost all day until about 3.

Ali hooked up on Bait on a good heavy fish. When we saw the spot of Orange come up we both said Holy Shit at the same time. This was by far the biggest red I've ever seen. It dwarfed the 5-7lb fish we had been catching. 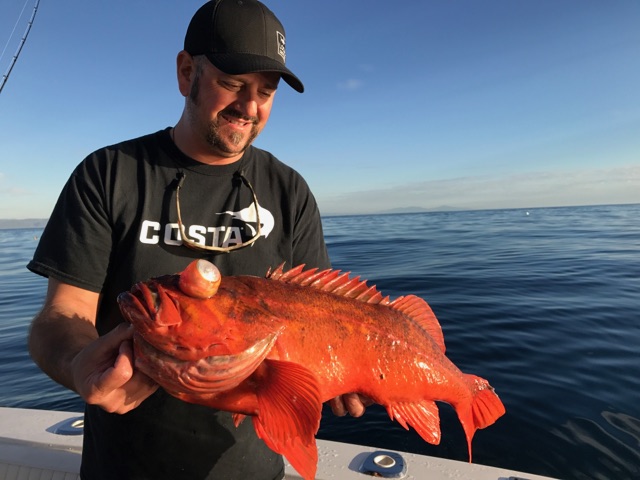 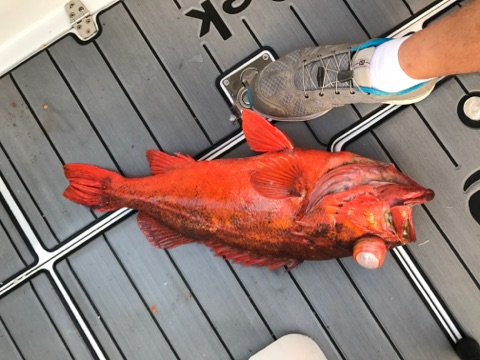 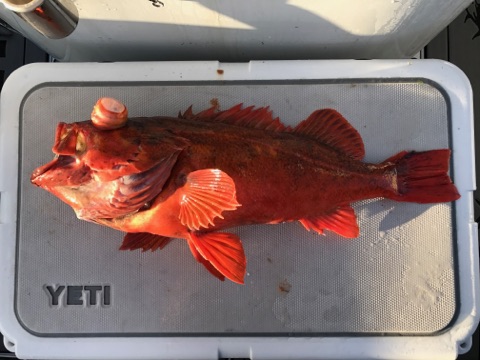 That's the top of a 110 quart yeti and the pics still don't do the thing justice. I've seen a lot of big fish hit the deck of the Jihad. I've never seen Ali stare in shock at a fish like he did with this red. Really really cool to see that dinosaur.


About 4 we pulled the plug with limits of good fish and were back in the slip around 5:30. 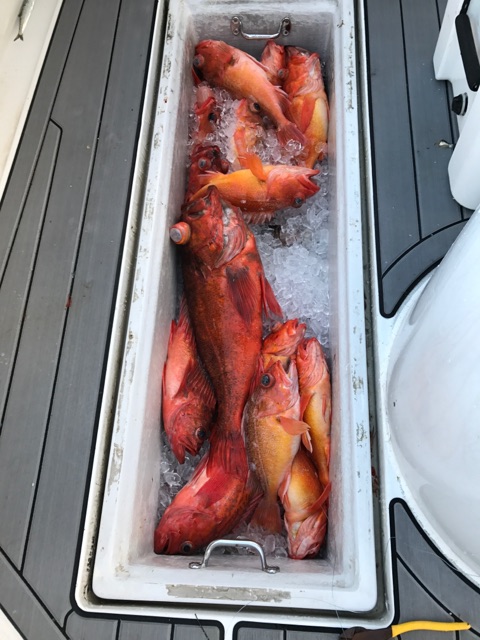 such a fun trip. Excited for fish and chips tonight!


Thanks Ali sick as always!!!!
Reactions: finishright, widgeon, 26grumpy and 14 others
Upvote 0

They still get that big in certain spots.. 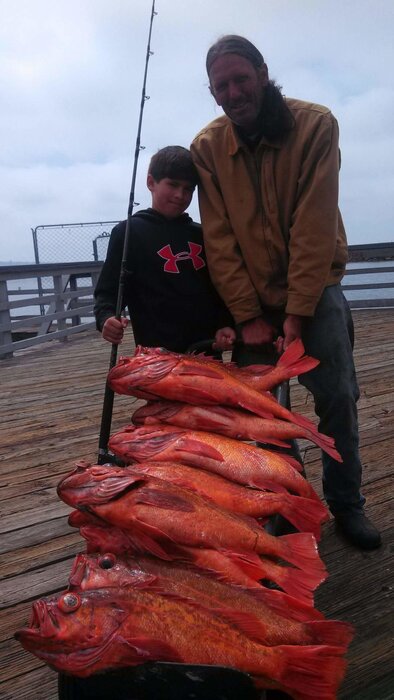 Where is the Finger Banks?
Upvote 0

nice job great to see that kind of weather.
Toggle signature
"Y'ALL OWES US MONEY"

Down another 20 miles or so below the Coronado Islands.
Upvote 0

Can't wait to do that again.
Reactions: Rabid Fish, karlk1125 and Northeastfshman
Upvote 0

Northeastfshman said:
Down another 20 miles or so below the Coronado Islands.
Click to expand...

Weird coloration on that big red. Almost looks like an Arkansas
Toggle signature
Check out my weekly column

get some said:
Weird coloration on that big red. Almost looks like an Arkansas
Click to expand...

I thought the same thing, nevertheless a quality fish! Good job guys!
Toggle signature
Thanks for your report. Hook up! Cory
Upvote 0

Could be wrong but that sure doesn't look like a red.. Blackgill Mexican rockfish is what it looks like to me..
Toggle signature
Tim
"TailChaser"
25' Davis Short Cabin Rock Harbor
Reactions: karlk1125, Lucky B and sdjfish
Upvote 0

Boat
Not My Ride

Amazing trip, photos, and write-up, but that was so last year!
Toggle signature
Check out San Diego Legends, Second Edition at www.jackinnis.com​
Upvote 0

Holy crud. That water looked awesome. Was it tough wearing socks and shoes while fishing? Probably wasn't any current to deal with either. You guys really have to rough it down there

It's a vermillion. Or red. My buddy is a skipper in Alaska. We went to a spot that he only lets customers whack two drops!! Almost always get pigs around that size. Very old old fish like 70. They get really red and black hues in red. Almost like black gill!! Nice Fish!!
Upvote 0
A

See about one fish that size every other trip to Channel Islands and San Nicholas. I'm sure there are many in the deep water where we can't fish, but they are indeed rare where we can fish. You have to know the area.
Upvote 0


Pgnracr said:
It's a vermillion. Or red. My buddy is a skipper in Alaska. We went to a spot that he only lets customers whack two drops!! Almost always get pigs around that size. Very old old fish like 70. They get really red and black hues in red. Almost like black gill!! Nice Fish!!
Click to expand...

Dude, they don't even get vermillions in AK.
Toggle signature
FIN.
Reactions: Nardo, fishsmith and get some
Upvote 0

After showing the pics to a few buddies who know waaaaay more than me about rockfish, they all think the big one was a Mexican Rockfish.

I never even knew they existed.

Reactions: Nardo, KINGSIZE and get some
Upvote 0

That's still big for a Mexican red, they used to call them Arkansas reds up here before deep water coddling became a thing of the past. I've caught quite a few of them fishing in San Quintin and don't think I've seen one over 12-13 lbs.
Toggle signature
Check out my weekly column

Did a little research and it seems like Mexican rockfish should have black webbing on their pectoral fins. This one doesn't. I'm not an expert on the topic, which is mainly why I didn't the research in the first place, but it seems that it's missing a key piece of identifying evidence. Also I couldn't find record of a Mexican rockfish nearly that large in any literature. After reading though I could not find a better fish it could be either lol.

Either way (and most importantly) sweet catch!
Upvote 0

How could you guys handle the slop? I mean jeez! It sure looked rough out there at the upper finger bank.

Toggle signature
If you stay on a boat long enough you are bound to catch a fish!
Upvote 0

Azarkon said:
See about one fish that size every other trip to Channel Islands and San Nicholas. I'm sure there are many in the deep water where we can't fish, but they are indeed rare where we can fish. You have to know the area.
Click to expand...

The reds in the photo I posted were taken a couple years ago on the 1/2 day redondo special that was offloading on the pier...(that's scotts son in the photo)...after many many years fishin the same areas everyday Eric has a few legal spots that can produce like that under the right conditions and only fishes em a couple times a year...your lookin at one guys limit in the photo as there were many more fish that size caught that day...
I'm sure there are many known and unknown spots up and down the coast and if you spend the time lookin it can pay off big locally...
Last edited: Jan 3, 2017
Upvote 0

Brett keep working out front, there's some really good spots very close to home. Wind from 270 is money on the local stuff.
Toggle signature
God is great, beer is good and people are crazy
Upvote 0

I was never even aware of "Mexican Rockfish" thanks for the heads up guys. I caught and odd looking red the first year I lived here. I sent it to Jason asking him if it was a cow cod (looked closer to that than a red) and Jason came back that it was a red. I'm guessing now it was a Mexican Rockfish. Either way a big bottom critter.

Brett keep working out front, there's some really good spots very close to home. Wind from 270 is money on the local stuff.
Click to expand...

Yup have plenty of stones out front and to your point it's all slope rockfish stuff so the direction of the drift is key. I have found that stuff moves around a bit.

Box is usually so consistent and solid that I stopped fishing the stuff out front. There is so much hard bottom down there it's insane but the last two years it just hasn't produced like normal.

To bag we can't fish any of it till March Joe!

Hope you had an awesome holiday season!
Reactions: 26grumpy
Upvote 0
Show hidden low quality content
You must log in or register to reply here.