Last year, with the relatively few wahoo caught I remember thinking wow if it's like the old timers say and next year might be an even more extreme el nino, I'd love a chance for a real wahoo fishery, or at least a little better shot at one.

So it comes true; this year for the first time in CA history we actually had what I would refer to as a legitimate wahoo fishery; and I became pretty obsessed.

I had some marauders tucked away in an xtratuf box from 7-10 years ago when I went on my last 10 day trip. (Slow trip, no wahoo, 5 or 6 cow tuna, that's it) So I got some of those out and then got a couple new smaller ones too. I'd pulled the smaller ones around in a spread of 2 marauders, 1 catchy tackle spinner troller thing that was hot pink and about 10 inches long and a zuker 3.5 in green or black or purple and black depending on the day. I pulled this spread for 4 weeks. During these 4 weeks I adjusted speeds between 7.5 to 10.5 knots, I adjusted the marauders' length behind the boat, I adjusted trolling direction and blah blah blah blah. Seems like every variable to try to tune into these elusive skinnys.

I work in the industry and a lot of people by this time knew that I was eating and sleeping a wahoo obsession; so it seemed that pretty much any times someone caught one, it was texted to me or a video was sent or an instagram screen shot or something! It was funny. Kind of.

So two weeks ago I decided to drop in the larger of the marauders, I had this orange tony the tiger colored one. Pulled it on 3 occasions; once on a crew trip on one of our local 6 pack boats and twice on my boat. Nada.

So Monday, 10/26/2015, my normal day off of work, a buddy and I leave out of Mission Bay with a plan of west and working north. Water temp was 73. Weather was nice, really nice, so we bent it south a little and started around the lower 9 kind of working our way north zig zagging from the front drop to the back. Water was nice and blue and had warmed up on the backside to a little over 74 and change. Found some flying fish and was pretty confident. So far it seemed like a lot of the other days I'd put it in the last 6 weeks. Everything looks right, just no bites yet.

So we work our way north to about the middle of the 9 and decide to jump over to the 100 fathom curve for the last leg up before turning east into MB. BAM! About halfway between the 9 and the curve the clicker goes off right next to the helm. It looked foreign. That rod's not supposed to be bent like that; it hasn't been bent like that in over a month, weird.

We had made a plan prior to hooking this fish so actually everything stayed pretty calm on the boat. We kept moving forward at about 3 knots, my buddy got all the other rods cleared and the thing was coming straight to the boat with constant, slow and steady tension. I'm thinking 'is this an open water dorado or something, I thought these things were supposed to take off'; then it did! A nice 40 yard run on some pretty heavy drag on 80# XXX. Awesome fish. Two more runs and the thing was stuck and in the boat. Excellent gaff shot by my buddy and I think we let out some yells that Point Loma probably turned their head to.

It's been a long time since I felt that rush of emotions over a fish. It was great. I feel like one more fish of a lifetime in my catalog now. Their are a buch of overused sayings to capture this day, but it was really like 'hard work' if you can call it that, paid off. 'Put your time in' and all that stuff. All I know is we did put our time in and it did pay off. Awesome.

So we box the area for another half hour and had moved our 'beer ice' into 'fish ice' and decided let's just get this thing home and cut while it's still prime. I can cut a fish pretty well, but I'm thinking this thing is gold, I want it done perfectly, I'm going to just walk it up the dock to Sportsman's Seafoods for processing. They're closed. I had access to a walk in freezer so we wheeled it in there in a dock cart for about 15 mins to kind of get the fish to a real nice consistency for cutting. Weighed it; 38 and change. Wow, thought it looked bigger lol. Perfect.

So we wheel it back down to the boat and throw it up on the next door neighbor's dock box for cutting. He was nice enough to clear it off and even leave his knife out. I'd never tried one of the bubba bladeds before so I thought I'd give it a whirl. The knife was nice, cut half the fish and I was actually pretty proud of the fillet job so far. Wahoo turn out to be pretty easy to cut. We bagged half of it and put them on ice. We flip the thing over and my buddy has the hose out to kind of spray down the dock box for this next side of the fish. I take one step back so I don't get all wet. LIKE THE AWWWW INSPIRING DAVID BLANE OR WHATEVER MAGICIAN, THE GOD DAMN WAHOO DISAPPEARS! In a blink of an eye that fish is gone! The profanity starts flying, people are coming out of their nearby sailboats and my buddy and I are paralyzed for a second. I grab a long gaff off the nearest boat and my buddy is kicking off his sandals to jump in the water.

We then got to witness about a 500#, cute, cuddly, protected California Sea Lion eat half of our prized possession. He loved it. It was the tastiest fish that f&c*&^% fur ball has ever eaten in his life. It took every bit of good decision making skill in my body to not stick that dog with the gaff in my hand.

Sad right? Pissed off right? Ehhh.. Whatever. We caught it. We caught our unicorn. We caught it leaving a San Diego port in California waters. I was too happy to be too mad. Ten minutes pass, all you can do at this point is laugh. The ending adds a great conclusion to this story when I tell it for years to come.

I have a feeling in true BD fashion, I will be told how stupid it was to filet this thing on a dock box and blah blah blah. I get it. That wasn't the point of this post. I just wanted to share how gratifying this was to finally put a check in this box and thought you guys could get a good laugh too.

One of the first things my wife ways when I got home. 'Congratulations! I'm so glad you got it! Does this mean you're going to quit being an asshole?' Apparently this last couple months' quest has consumed me even more than I realized hahah. Here are a few pictures. 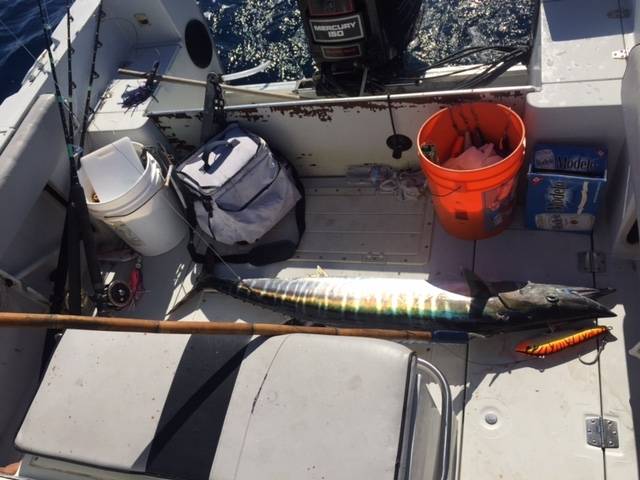 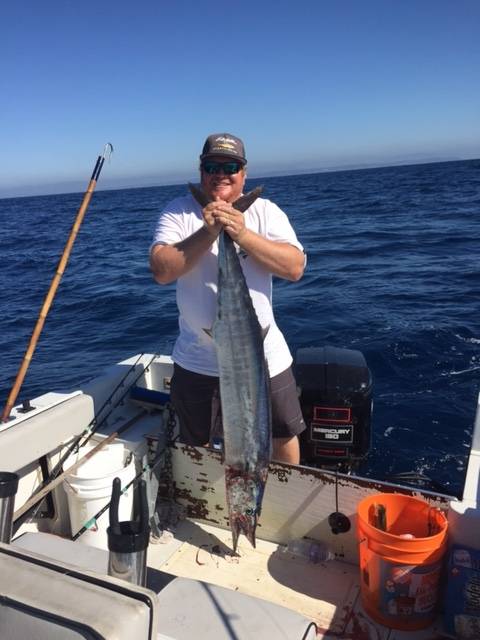 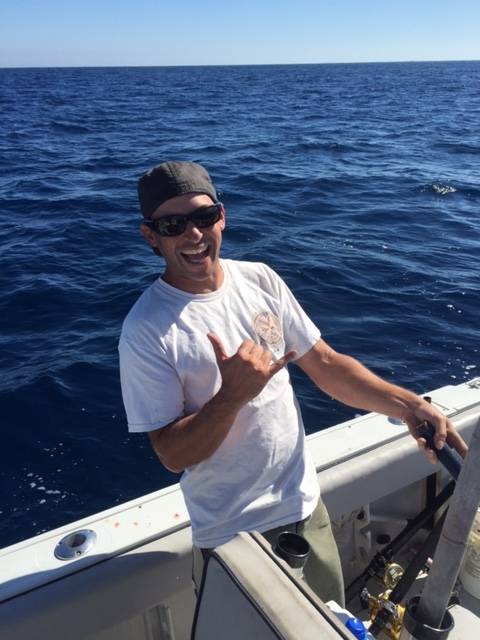 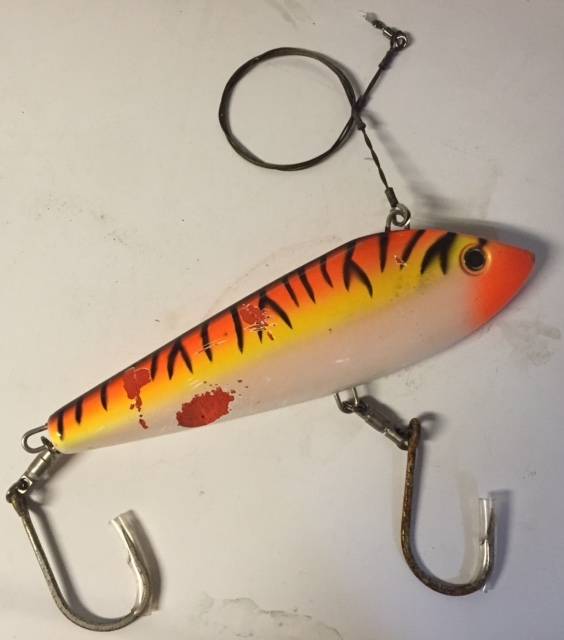 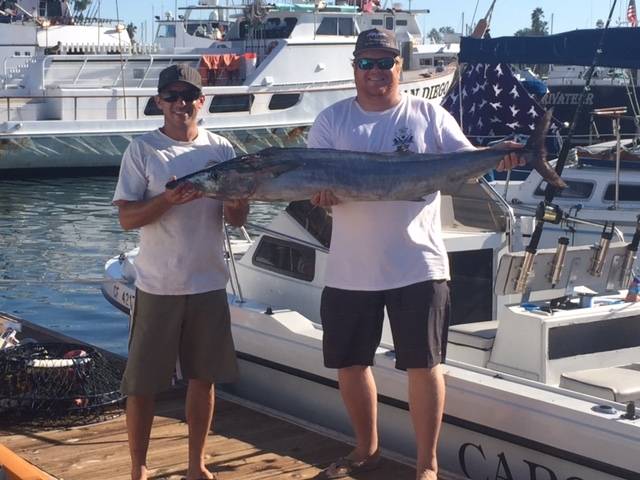 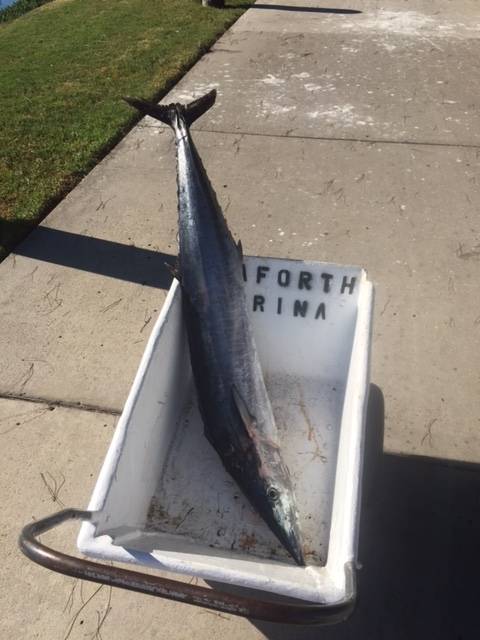 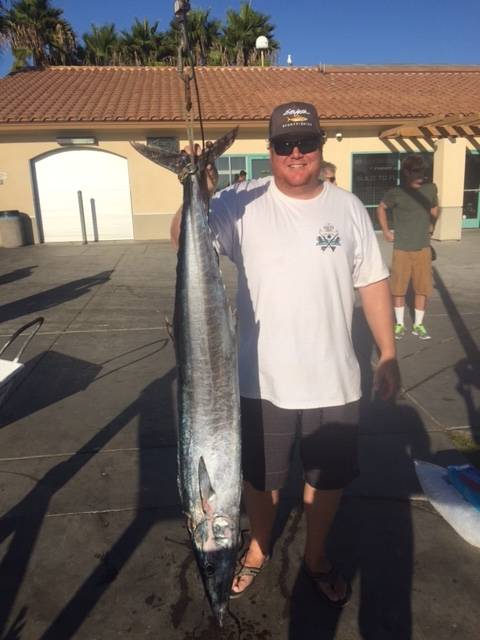 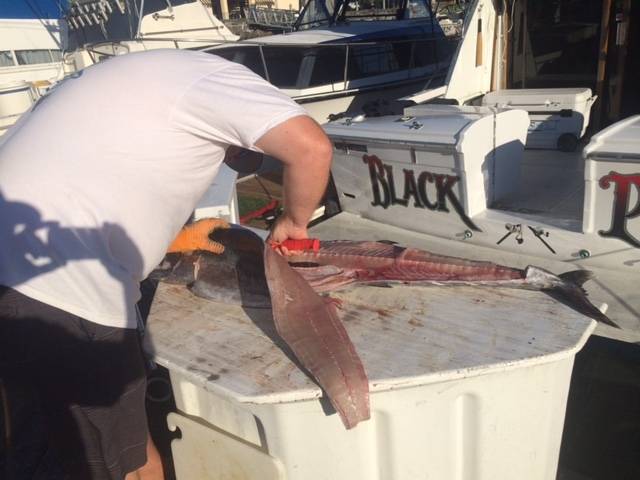 Dustin! You dog you! Glad you got to check the box! I'm still working for mine & hers. (She's a little obsessed you might say) Will & Chica Dulce
Toggle signature

You got one! Many of us are still trolling. Congrats and condolences, your loss makes the story.
Reactions: pimpintackle
Upvote 0

Great story of perseverance. Dogs will be dogs. I'm telling myself you stuck that dog, got your hoo back, and you know better than to share that on the internets.
Reactions: pimpintackle, FishPimpII and rick rouland
Upvote 0

Wheres the last picture ?
The one with the other half of your trophy in that f---n dogs mouth lol.
Great story, wish the ending worked out better for ya.
Upvote 0

My wife gets pissed whenever I mention taking the boat out for wahoo...
Toggle signature
It took a while but I'm finally Avet free!
Reactions: pimpintackle
Upvote 0

Always, it is a tendency to blame the victim of theft--"you should have done this, or not done that" but fact is, you did nothin wrong--the thief did. And you got some of the great fillets, oh well. And thanks for posting, gives us who are going out in the next few days encouragement they are still out there.
Upvote 0

Nice work!!! Great story!!!! Man you got every single gram of meat off that one side....good job!!!
Reactions: Bottom Line
Upvote 0

by far the best story of the year! congrats..........
Toggle signature
FEEL the RIDE . LIVE the LEGEND.

Crazy and good, enjoy the best part for eats and congrats on the catching!
Toggle signature
Thanks for your report. Hook up! Cory
Upvote 0

Way to go on the Wahoo! A seal is like a criminal next to your boat if you have a fish just waiting for the opportunity to rob you as well!
Upvote 0
P

"The rush of emotions over a fish".

Toggle signature
I fish for sustenance,I suffer from sustenance abuse.
Upvote 0
B

congrats, hard work does pay off.
Upvote 0
B

Outstanding! Congratulations on your well deserved accomplishment! Way to work hard and stick with it.
Upvote 0

Nice job Dustin. Hope to get out soon. Congrats on the Bucket List.
Toggle signature
I am the Hook in Grip-n-Hook
Upvote 0

Thanks for all the cool comments you guys.

That's a crazy video of that orca sending the fur bag into orbit!
Toggle signature
Angler's Tech
When You Need to Catch a Solution
anglerstech.com
Upvote 0

Wow, both excited for you and bummed for you at the same time and I think we saw you out there on Monday. Congrats on your catch.
Toggle signature
Diehard's Creed: Work to fish. Fish hard or stay home. V/R - Meat
Upvote 0
Show hidden low quality content
You must log in or register to reply here.