Second time this year I put a date on the calendar to go tuna fishing, and the tuna go lockjaw the day or two before, only to resume biting a couple days later. Like clockwork, every time. C'est la vie, let's go to the islands and have some fun. Got to South Island, dropped Rapalas back, and got picked up on the slide. 10 seconds of fishing and we're bit. Cuda. Ok, whatever. Make the scenic u-turn around Lighthouse and up the lee, and it's small boils and birds from tip to tip, north to south. The entire lee was leaping cuda, literally. Every cast for 30 minutes. Any direction. Multiple bites per retrieve. Fish jumping out the water on your jig. We played a game trying not to catch a fish on synchronized casts, and we both lost.


After releasing a gazillion cuda, we headed East to the flats. No sign of bird activity, still early. Hit a few more spots but no yellow signal. Decided to venture offshore a tad to see if the close-in kelps were holding transition fish moving to paddies offshore. 'Tis the season for that, after all. Sure enough, first kelp, almost due south of Keyhole, and we have two curious teen yellows follow bait and jig back to the boat. No biters though. Kept moving and hit a dozen more kelps out into the color break in the canyon, nobody home. Dragged a couple tuna jigs just because it feels good to be trolling for tuna in June, but no luck. Turned back toward Pukey and found bird schools up and roaming. Successfully intercepted a boil and got one yellow on the iron, shook him off inside the boat, fired back out and hooked up again. This one was Fat Thor, fought me like a 30 pounder. While I'm pulling back on this chunk, the school rushed the boat and I had about 50 free swimming yellows right under my feet on the bow. Insane. Buddy hooks up on light gear but pulls the hook, and by the time I get mine in, the school was down, ne'er to be seen again. Brief injection of adrenaline into an otherwise slow afternoon. Headed home via IB flats, no more signs of life, water the color of baby diarrhea. 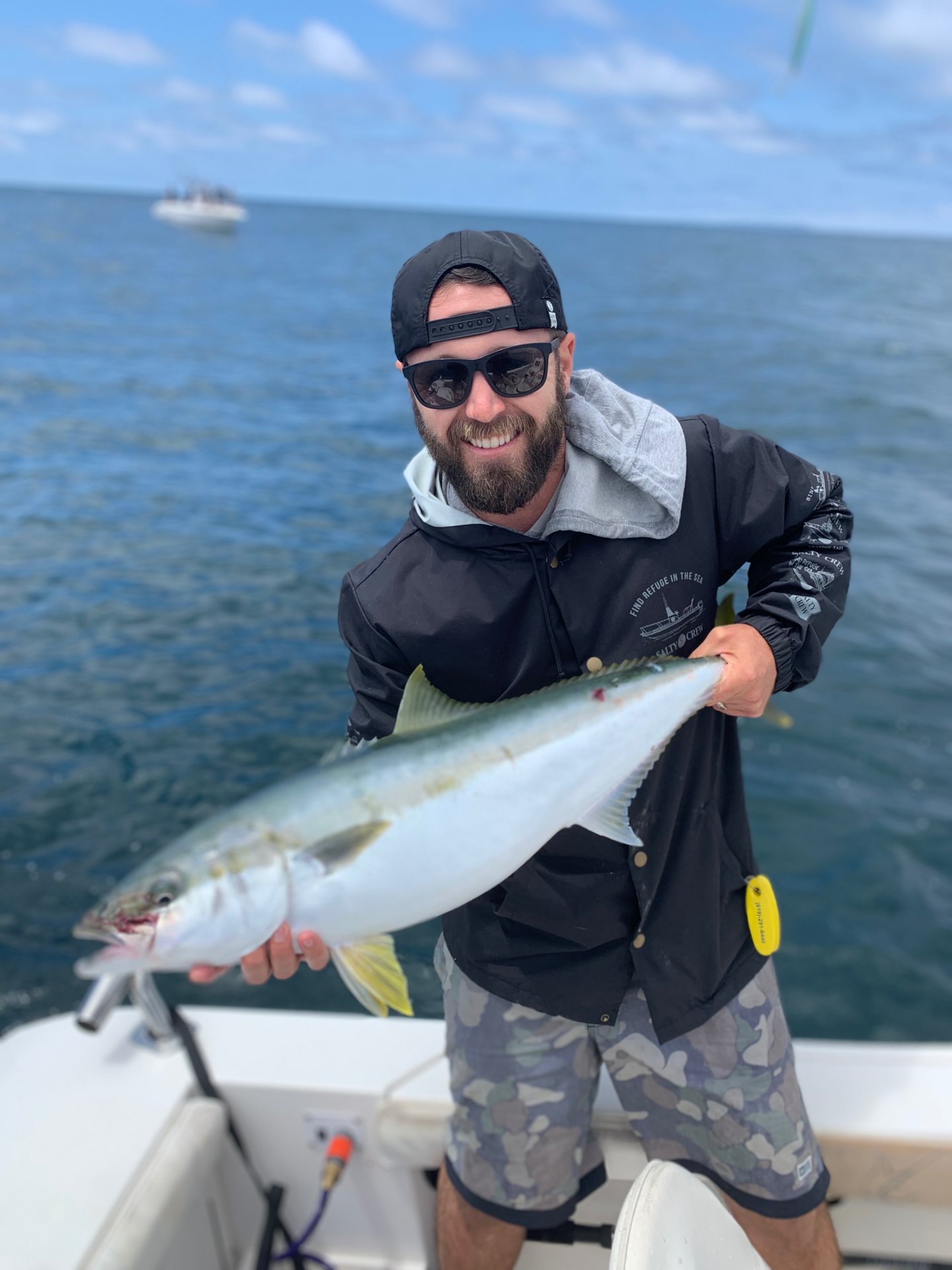 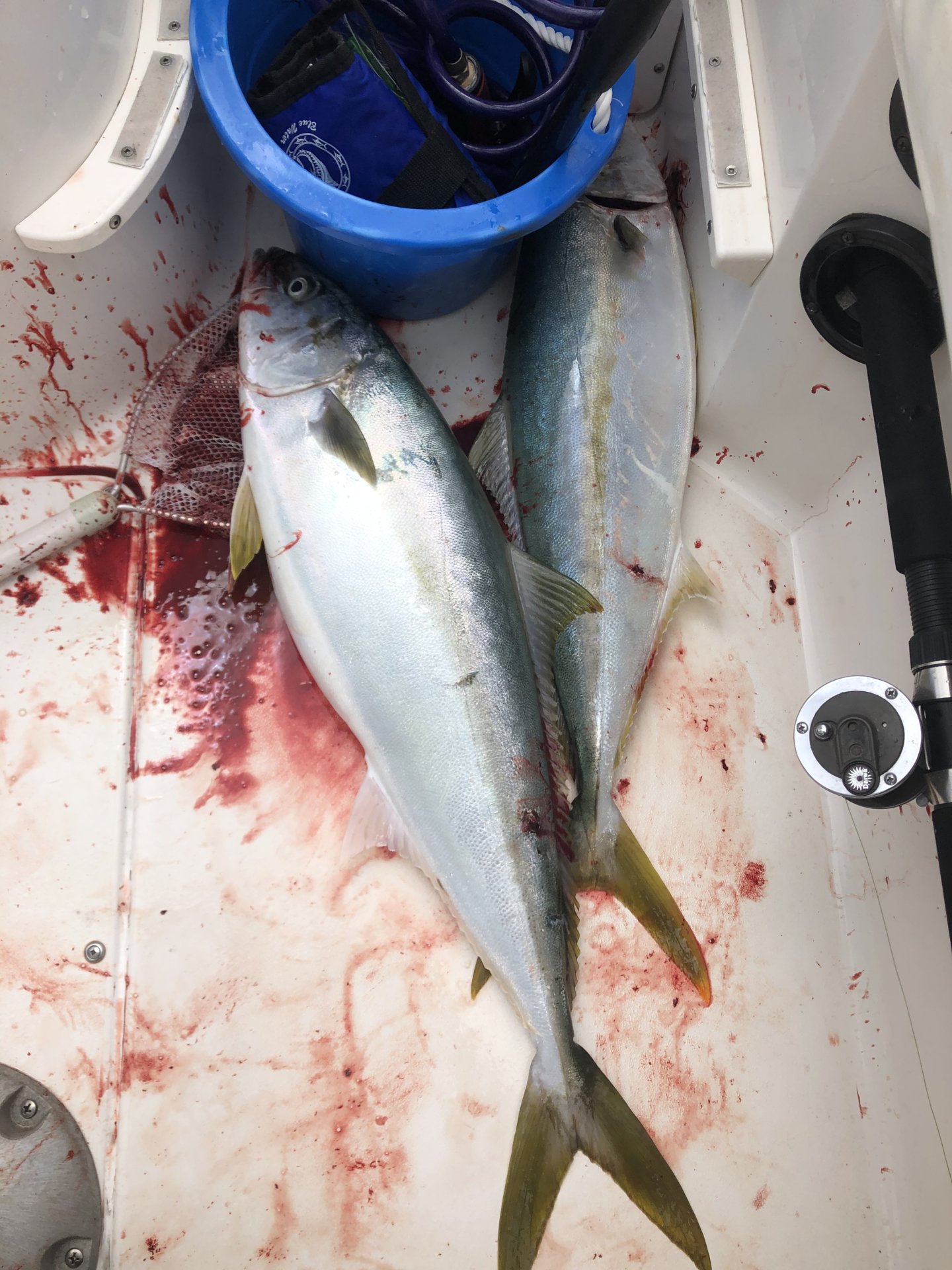 Cleaned the boat, put the leftover bait on ice, played with the fam, ate dinner, went to bed.

Woke up and took the wife and boy, now 3 and a half, out of Mission Bay, since he has been practicing his casting in the driveway and begging to go fishing. Second anchor job in the channel and his little green mini pole is twitchin in the rod holder, while he's jigging his bigger pole. Hand it off to him and he reels up a gorgeous baby calico that bit his modified sabiki set up (garnished with sardine strips). So stoked. Got another one later on the other rod, threw them both in the bait tank to observe throughout the day, and release at the boat ramp later. Got a nice visit from DFG, who kindly rammed the side of my boat upon arrival. Maybe their reverse is out? Said hi, showed license, waved goodbye. Kid passed out on the bow after all that hard work pulling up those beastly bass, and we cruised around with some cocktails for several hours until he woke up. Awesome day, he's pretty much ready for bluefin on the kite. 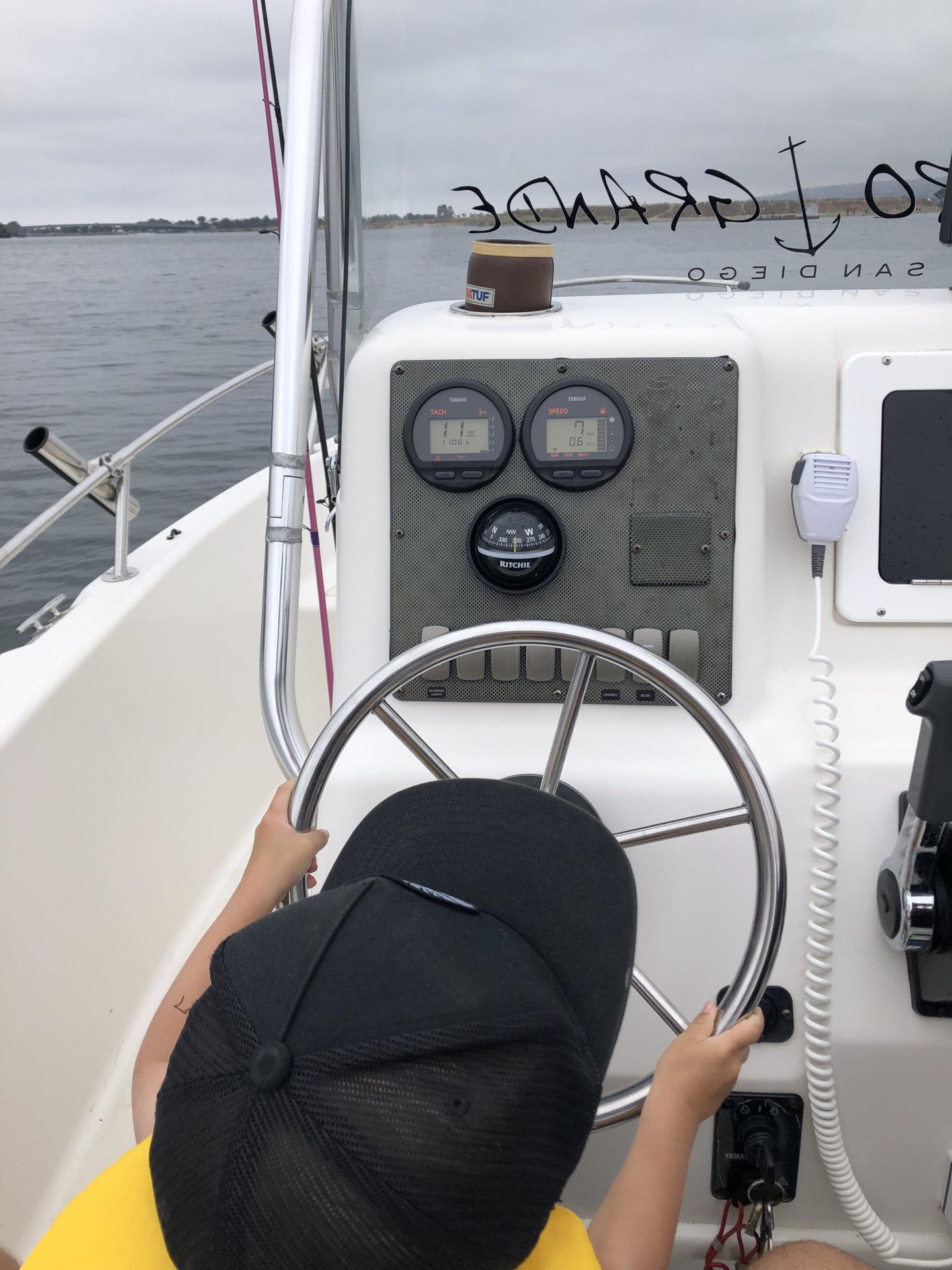 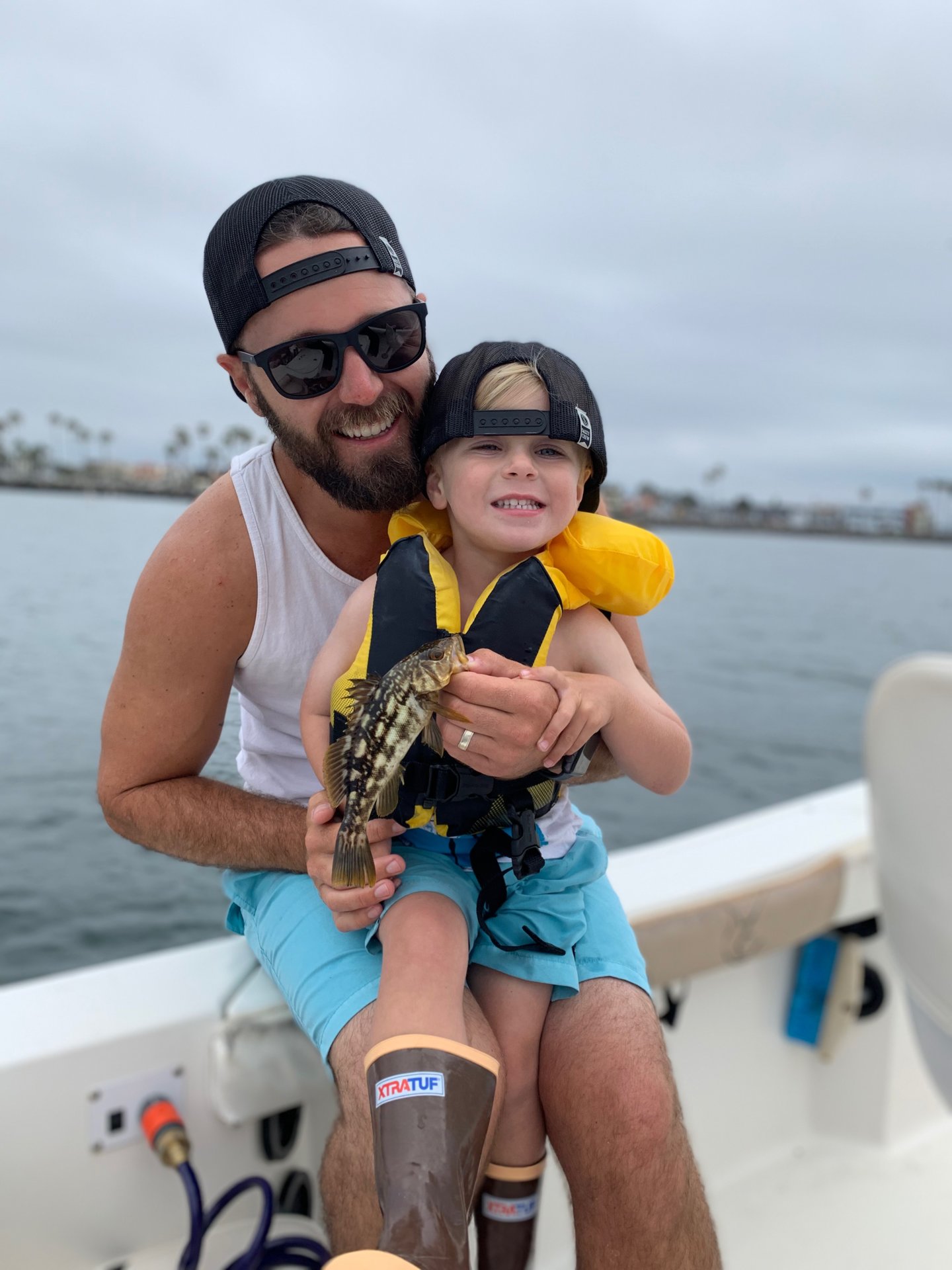 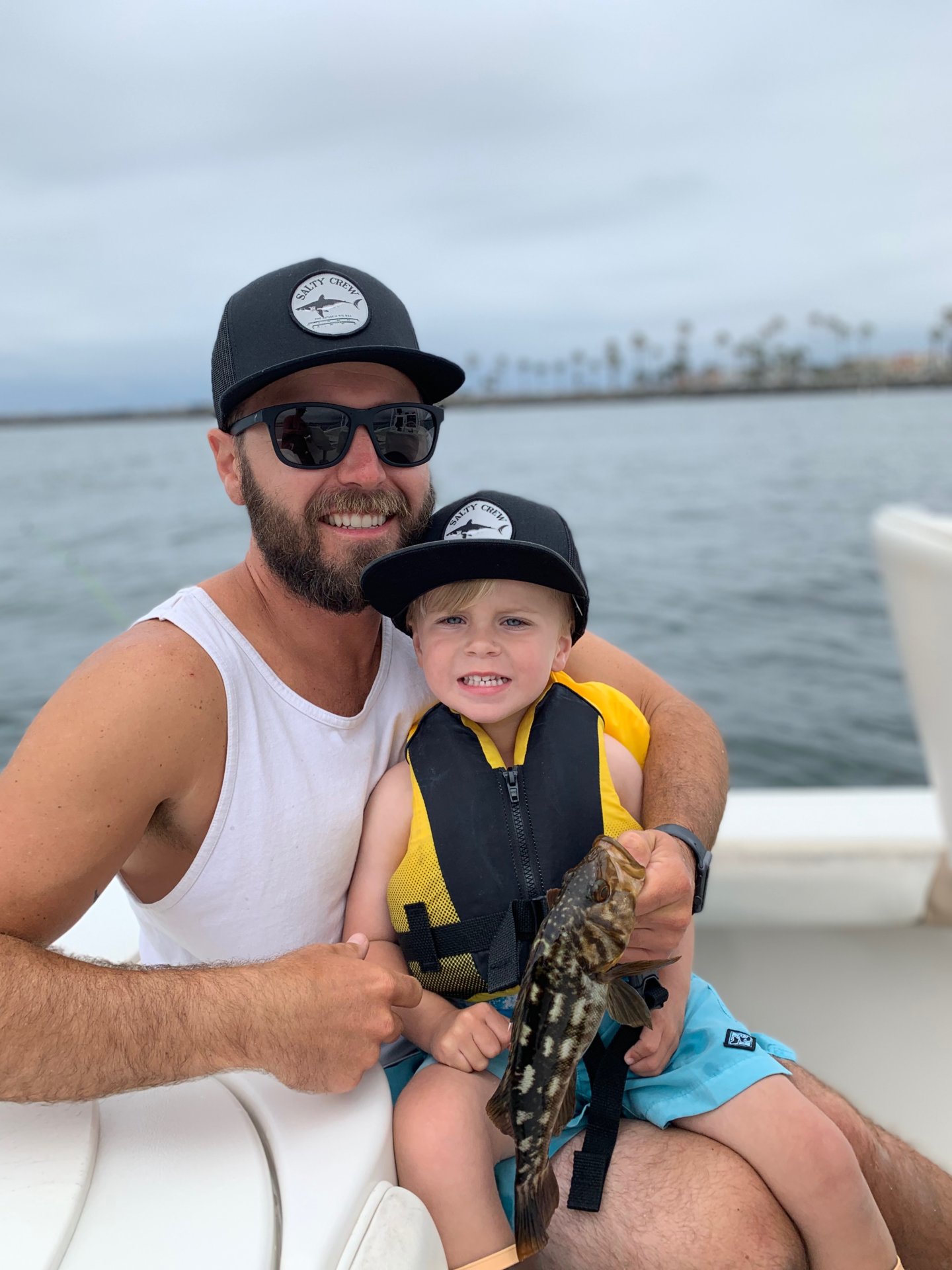 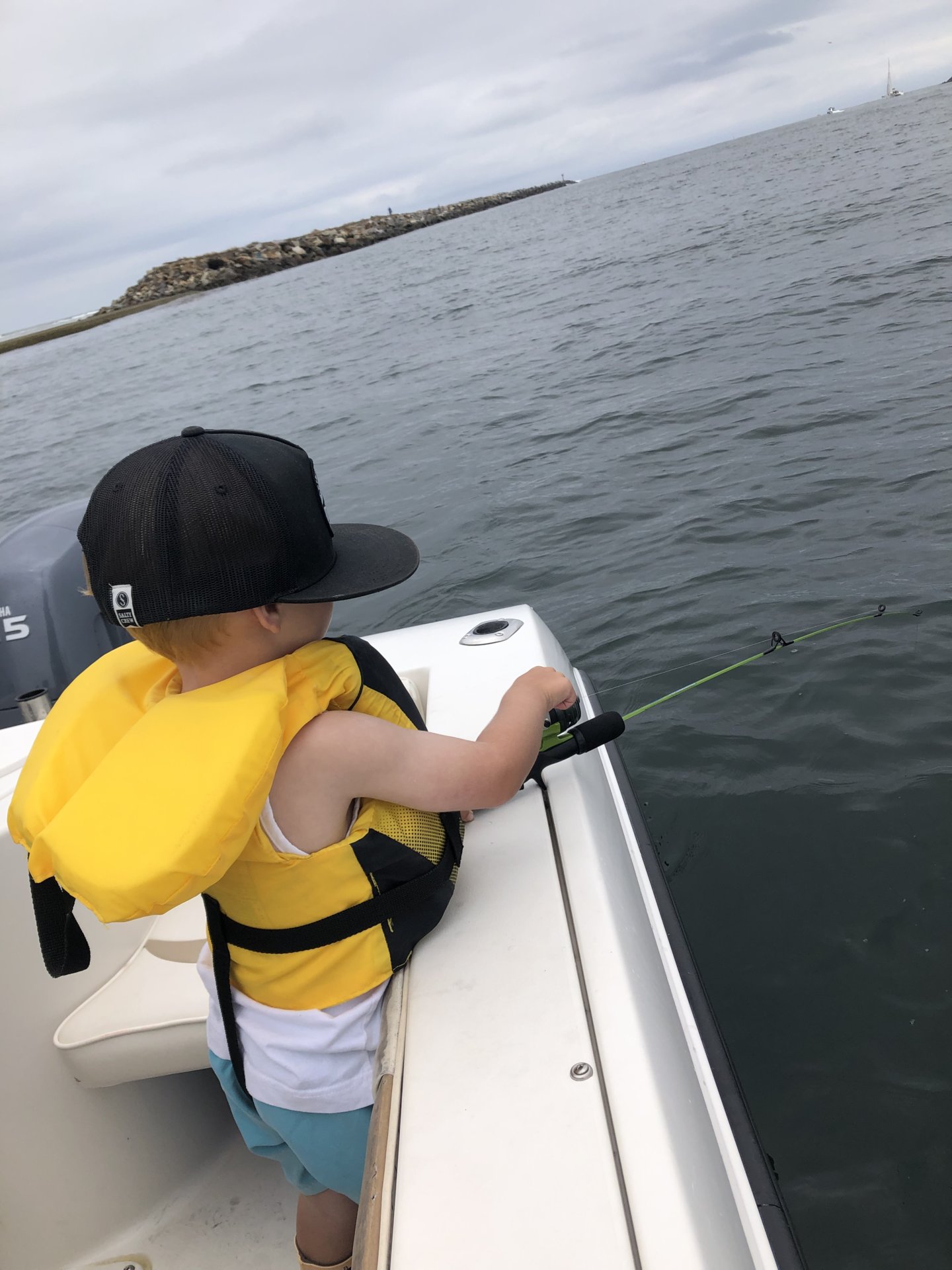 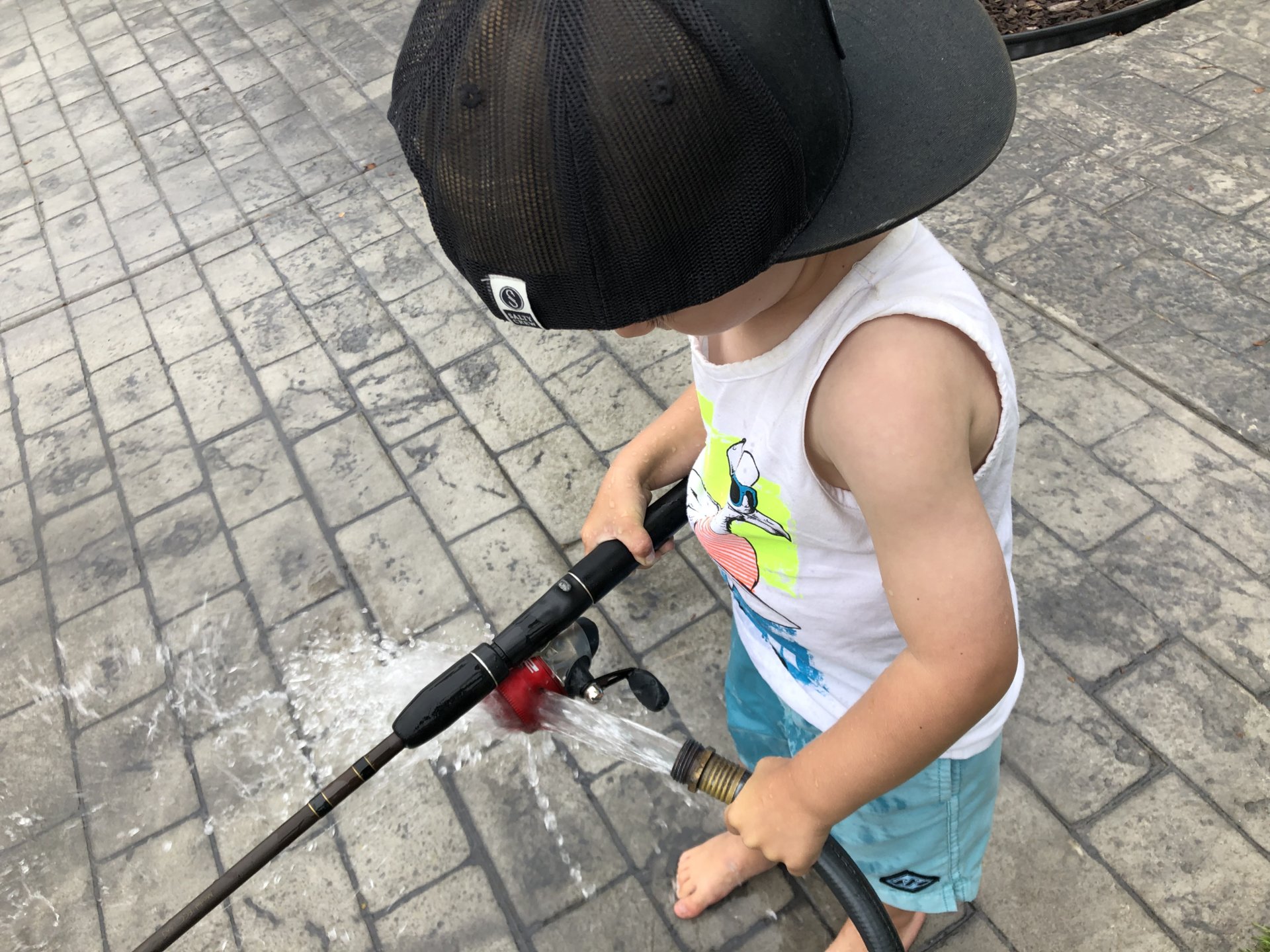 Water is still dirty, but warm at the islands (67) and tons of life. Yellows still there, will go berserk with the water blue's up. I see the tuna started biting again yesterday too. 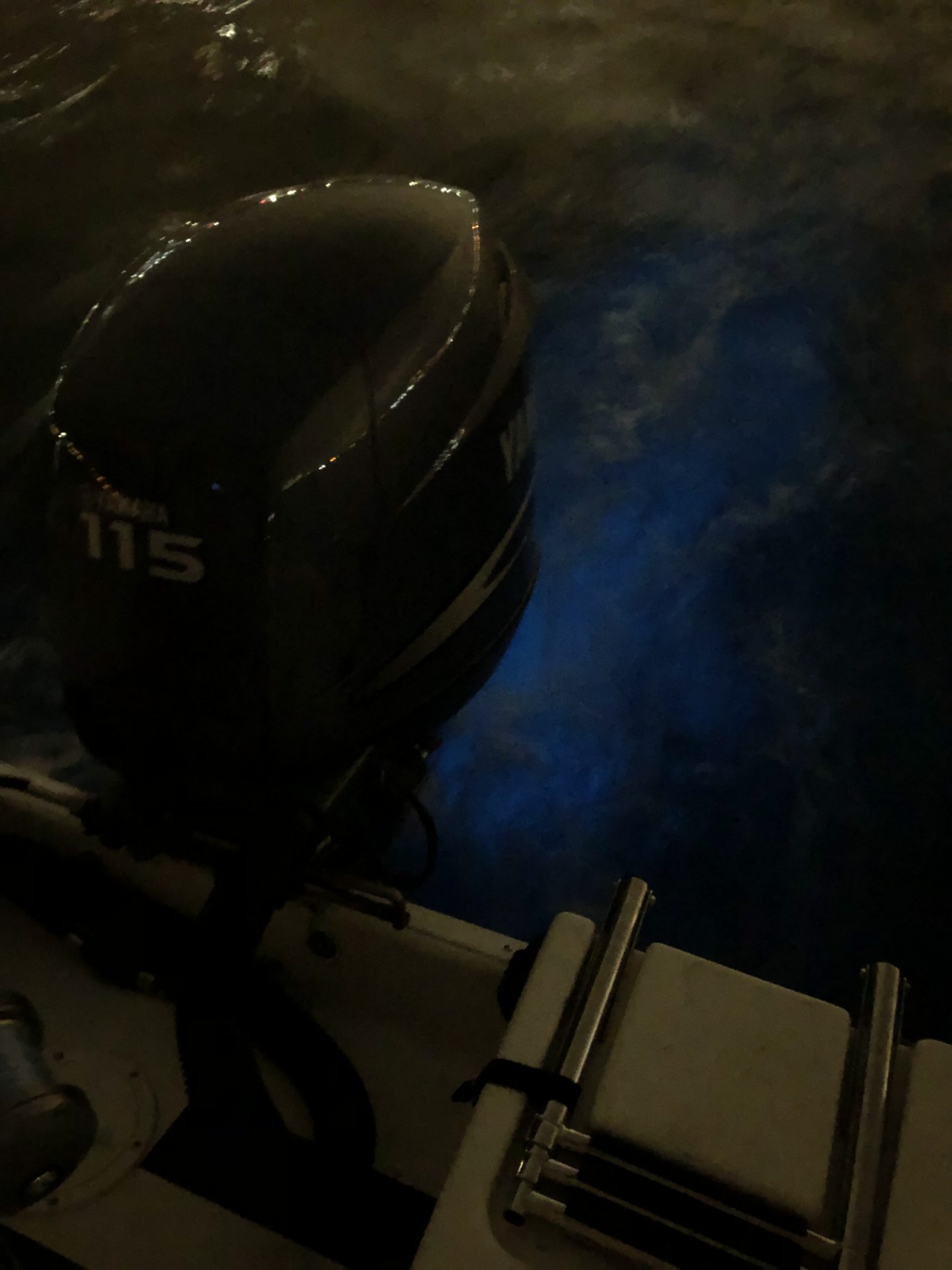 Still get a DFW court appearance even if you intend on feeding them to the dogs.
Last edited: Jun 17, 2019
Upvote 0
A

As a precaution, I would be careful about possessing undersized fish in your bait tank, even if they are alive.
Reactions: plj46
Upvote 0

Loved the XtraTuf's on the little guy and nice to seem him taking care of his gear after his fishing trip. You taught him well. Now if he could only back the boat off the trailer when you launch....
Upvote 0

You’re asking for it when you take pictures of under size fish. Slam dunk case for DFW.
Upvote 0

Love the picture of your Son hosing off the gear!
Wait until your Son hangs the right kind on hat little stick and reel, then it's time to upgrade him, keck I'd upgrade him now, easy for me to spend your money.
Nice job on the Yellowtail!
Not sure I'd keep any fish in my splash well, bad juju!
Toggle signature
Luck is where planning meets opportunity.
Upvote 0

Wow, tough crowd. Didn't see anybody in the back of my boat with a tape measure, you guys are sneaky.

Seals are gonna either eat the yellow on the end of my line, or a dead barracuda. Either way, they are going to get fed. Pretty sure the ship has sailed on the root cause of the sea lion problem.

If a DFG officer is going to handcuff me in front of my 3 year old for temporarily letting a 6" calico swim around my bait tank so he can touch it and see it and learn from it, and then let it go, well, more power to him, I suppose.

Clearly the nice officers who verified my annual license yesterday and didn't feel the need to strip-search my boat went to a different warden academy than some of you.

Also, for the record, the last time I was stopped and checked by the DFG coming home, they took a look at the yellows in my fish box, and then nicely pointed out the lone cuda we had forgotten about in the transom. Without any explanation from me, the senior officer explained to the junior officer how cuda and bonita make great distractions for sea lions if hooked up to a more desirable game fish. They checked my permits and wished me a nice day.

Your son's gonna be a fish slayer and a ladies man in a few short years!
Upvote 0

Teach them young and they will spend more time fishing than getting bored and in trouble. Right on.
Toggle signature
Thanks for your report. Hook up! Cory
Upvote 0

Baja Belk said:
Wow, tough crowd. Didn't see anybody in the back of my boat with a tape measure, you guys are sneaky.
Click to expand...

Tough crowds . . . keep you from getting in trouble.

Hey, most of us are here to help each other Baja Belk.

Good to see everyone is managing their treads today.
Upvote 0

Now you did it, that kids going want to fish every weekend for the rest of your life. No more football and lazing around the house for you. Putting him behind the wheel sealed the deal.
Upvote 0
Show hidden low quality content
You must log in or register to reply here.