Just got back from hooping in SD Bay. Got 14 keepers! On my way in I was boarded by Fish and Game, he asked us for our docs and permission to ckeck my boat.

I was fine with the search, I had nothing to hide. He then asked, "who measured this bug"? I said, I did!!! He then said "I believe it is short".

I challenged him and said, "No it's not". He then said "are you questioning my authority " ?

I said "well yes, I believe you are wrong" . Fuck, big mistake!!! He became a real dick after I said that. He took the bug to his truck and told me, "you wait here", then came back and asked for my ID.

I followed him to his truck and asked what he was doing with the bug, he placed it in a cooler with Three other bugs and said, "I'm going to release it after I give you a citation".

I said " I insist that you measure it and let me get a photographer of you doing it , cause its not short".

He was pissed at this point and hell bent on writing the citation. I checked it twice before keeping it and it was "border line" but legal!

Bastared wrote me a citation and said it was short and that I was in violation.

I took the pic but he insisted that he be the one to measure it. Shoud I fight this or what do you guys think? 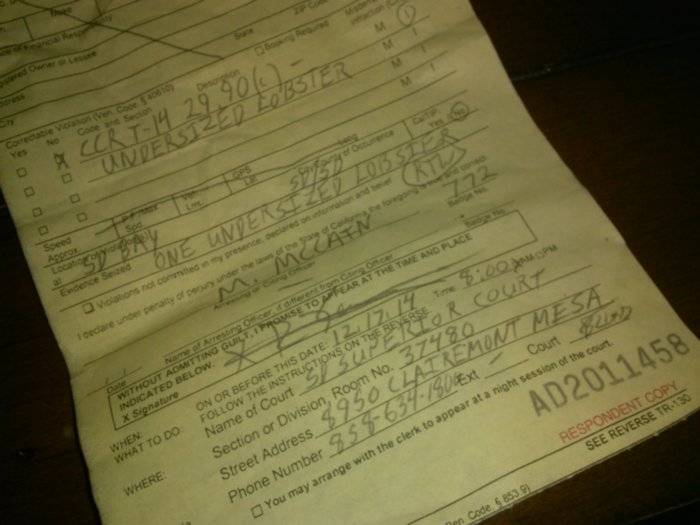 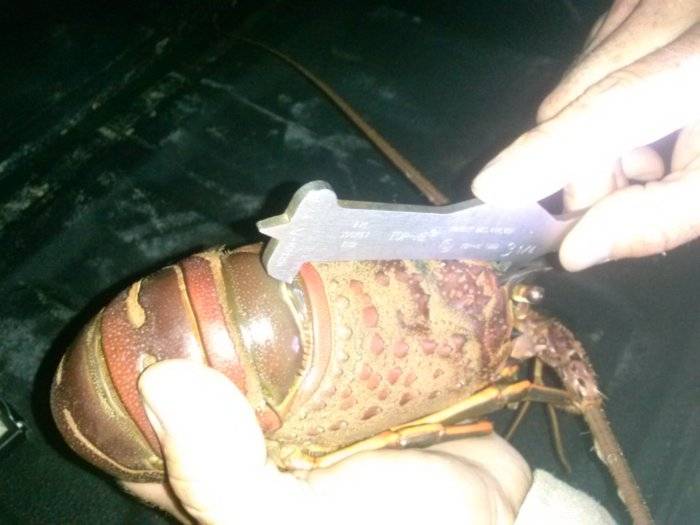 If you notice, he is not placing the gauge right at the tip of the eyes, it's slightly below .

I released 9 shorts and one "questionable" one, so there was no way this one was short!
Last edited: Dec 9, 2014
Toggle signature
[SIGPIC][/SIGPIC]Thee wife es home bitching..so I en going fiching...

I never keep them unless they are well beyond legal for this exact reason. I have been in the same situation but played stupid and they allowed me to release it and let me go with a warning. The bug I let go was legal but I wasn't going to piss them off. They can turn into dicks pretty quick. I actually took a file to my gauges and took off another 1/8" just to be sure I would never have that issue again.
Reactions: Dangerkitty77, TheBilldozer, Jig Strike and 7 others
Upvote 0
5

Your not going to win, but you might get some court experience and in the future take ones that are very legal and not just made it ones. Seems like those will always get you.

fight it !!!!!
inform the judge the guys was headstrong, "filled with authority",unreasonable,etc

get the word out to others besides ourselves that a lot of these "wardens" are jus ticket writers,,,not really lookin for right or wrong
Reactions: Rush Hour 2, mandoman68 and marlyn
Upvote 0

I use a file and take a few good swipes so I know there will be no problem. Also there is a small section of skin between the eyes, if you catch that when you measure them it will be short. I learned that lesson last year when I measures what I thought was legal bug. When the game warden check it was a bit under size. He then showed me what happened, I was shocked! he was right. He told me to toss it which I did. He was really cool. No site but a lesson learned. After we packed the boat up I went over to thank him again. He saved me about a 500.00 ticket. Just my 2 cents.

The proper way he said was is to slide the gauge over the head till it slips into the notch between the eyes. This way it misses that skin flap, then bring it over the back. If you come in from the front the way most people do you have a good chance to catch that meaty little flat and you are screwed! Lesson learned.
Last edited: Sep 28, 2014
Toggle signature
You gotta a ...WAR..FACE....AHHHHHH
Thats a...WAR....FACE!!!!!!

I was asked if I suffer from Mental illness? I said heck no, I quite enjoy it!
Reactions: karlk1125, Dangerkitty77, tinkerman and 3 others
Upvote 0

Sorry dude, but its short if the gauge falls over the edge of the carapace. Mine cost 300.00 in attorney fees to get it dismissed and it was not even my lobster, but on my boat. Good luck, but if the gauge does fit, they will not acquit.
Reactions: NO4NMTL, knot at work, Tdubbzskis and 6 others
Upvote 0

a miter saw and a carbide tipped blade with "legalize" your gauge easily....be careful th e fines are steeper in Taxifornia then anywhere in the country for being a human and making a mistake
Toggle signature
“It is no crime to be ignorant of economics, which is, after all, a specialized discipline and one that most people consider to be a ‘dismal science.’ But it is totally irresponsible to have a loud and vociferous opinion on economic subjects while remaining in this state of ignorance.” — Murray Rothbard
Reactions: boatless indago and Mike Seneca
Upvote 0

If you have the time, I'd fight it and show up in court. Explain your side of the case, you may get your fine reduced, the officer might not show up for the court date. If you don't show up, you lose and you get to pay, and I think you might be surprised at how high the penalty is for this, good luck.
Upvote 0

will the lobster be needed to be presented as evidence? or will the judge accept the word of the trained professional? and if you lose, will there be a higher penalty to pay?

but Xabout10 on filing the gauge to make it a wee bit bigger.
Reactions: Saluki
Upvote 0
B

I always measure from back to front. That way the " eyeball skin" is not n issue.
Reactions: Saluki and surfgoose
Upvote 0

He's an ass hole and you may win and save the citation fee, but you'll spend many, many hours trying to win. Been there and done that
Upvote 0

5150 said:
Your not going to win, but you might get some court experience and in the future take ones that are very legal and not just made it ones. Seems like those will always get you.

Isn't 9 bugs enough anyways for a night?
Click to expand...

Bummer. I would just pay it and save the agro of fighting it. I have heard to many stories like yours and throw back anything that is even close, both bugs and fish. Sounds more like a contempt of cop ticket. Playing dumb might have been the way.
Upvote 0
D

You will definitely win in court. All you have to do is show the picture you took of the short bug.
Reactions: plambeck, killer keller, tinkerman and 5 others
Upvote 0

They are out in full force this year which is good to stop people from taking shorts or too many! The 3 wardens I've met this year have been super cool. I file all my gauges about a 1/8-1/4 so I never have issues but my buddy had one opening night he checked 3 times with his new gauge and it measured legal warden checked it and it stuck in his gauge. He pulled it off and did it again and it stuck hard that he was able to hold the gauge and the bug remained airborne lol he said that one. Is REALLLY close but legal and sent us on our way. Another warden at the ramp was checking everyone and was showing how to properly measure and that one that stuck the others gauge measured a solid legal in the second wardens measuring.

Keep it shaved and you won't have issues...

If you fight it... and they don't dismiss or lessen penalty on the first day, you might be looking at 5 to 6 separate court appearances = 5-6 days off work/vacation time burned... but note, not only are you looking at a Large Fine... you are also looking at a Misdemeanor on your record. If you don't have a job, good luck finding one... Or two more "strikes" and you are out. IMO, Fishing Violations like this should be an "Infraction" (fix it ticket/toss it back), not "Misdemeanor" (Hard Core Criminal) e.g. DUI, Shop Lifting, etc. If you had a Cooler Full of Shorts, then that's a different story...
Last edited: Sep 28, 2014
Toggle signature
Too Many Crazies Out There!

dploc said:
You will definitely win in court. All you have to do is show the picture you took of the short bug.
Click to expand...

The picture you posted doesn't look like it will help you. I think you are just going to have to eat the fine

If only you were a illegal immigrant...... Nothing would of happened.
Reactions: Sea Esta, zkidd91, marine26 and 19 others
Upvote 0

Rob, sorry to hear that you got the ticket, Fish and game used to be such nice guys I don't know what happened.

As far as "Altering" the gauge I would check to see if that is not against the rules. I remember reading something about a guy getting a ticket from the California Fish and Game Nazi for not having a proper gauge. I could just see them ticketing a bunch of guys for this chicken shit reason. I would check the rules before altering the gauge.
Toggle signature
"The two most important days in your life are the day you are born and the day you find out why."
Upvote 0

wils said:
will the lobster be needed to be presented as evidence? or will the judge accept the word of the trained professional? and if you lose, will there be a higher penalty to pay?

but Xabout10 on filing the gauge to make it a wee bit bigger.[/quote

The lobster is not killed so it can be evidence.

That is a short. Pay the ticket.
Click to expand...

Is short your bad i wouldnt have kept it
Reactions: Rush Hour 2 and Waterdog3
Upvote 0

If I'm on the jury, I'd convict you based on your picture.
Toggle signature
"What is the MLPA anyway? They are the meanest people ever!"

From a novice POV.
Clearly short from the pic. If the officer was cheating from the front, he hid it well enough to back up the citation... You will loose unless he doesn't show up to the court date.
Toggle signature
Freedom is not free, support the troops.
Troops do not make policy, they enforce it, no matter how unpopular it may be.​
Upvote 0

if you notice he(warden) measured it WRONG!!! this pic is taken from the cfg website! 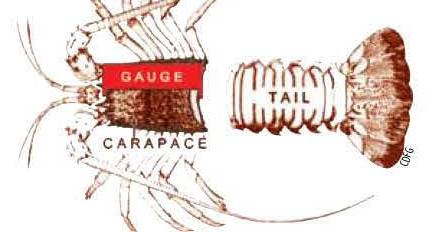 If they are barely legal or "close" I let them go. I have been known to be a dick on my own boat for this reason. I know when the DFW have an attitude it's hard not to react but I have found most are willing to let small infractions slide a little if you are honest with them. It's too late this time. I would have said I threw away 14 shorts and honestly thought this one was legal. Can I let it go right now? You put the officer in the position to defend his opinion and in this case you lost yours.
Toggle signature
If you stay on a boat long enough you are bound to catch a fish!
Reactions: blubby07, Tdubbzskis, Rush Hour 2 and 2 others
Upvote 0
Show hidden low quality content

Poor charter experience. Poll: Do I deserve a refund?