Got to the boat Thanskgiving Eve, and unloaded all my gear. To make things better, found out Inside Sportfishing was coming along to make the sequel to Big Boat Big Fish. It is incredible how much stuff you end up bringing. I went and stayed with a friend overnight and took a cab to the landing at about 4:00. Surprisingly there were not as many people as I expected at the docks. Got on the boat and we were ready to leave at 5:00 but could not, the fucking milk was running late.... These guys do an incredible job with the food. THink of the logistics of feeding 25+ people for 2 weeks fresh, good food.. ANyways after the brief meet and greet. I went to sleep for about the whole day. We were off to the Hurricane Bank along with the Rooster. Next few days were spent rigging. We beelined straight for the bank, arrived at about 3:00. The crew made some flyers. Upon sunrise things started to heat up. Small yellowfin and wahoo started showing up. There was no current, was really hard to get a bait away from the boat. We started using ballons to drift our bait out, that turned out to be the hot ticket for the day. I ended up keeping 1 at 150 and cut off 4 fish over a hundred. I was after the elusive 200 pounder. After a good bite on #100 - 220 fish, Shawn decided if we did not have much better luck the next day, we would head inside and meet the flleet.

Next morning we woke up to no signs of life. Trolled around the bank for a few hours, weather was shitty, choppy. We left around 10:30 headed inside. Took 2 days to get there. BUt what a site when we arrived. Once we got into the zone all the boats were working it was on. Rolled up on a school of monsters, started chumming. Then it was on. I sent out a nice cigar dine, butt hooked on a ringed super mutu 6/0 on #130 Seaguar with my Topless 30 (what a bitchin reel) Then I hooked a fattie.. He peeled off about 300 yards. Did not have a harness on at the time so got to work on the rail. Guys keep in mind the excel's rail is low, tough to use the rail on the bow with no swell. My Calstar 6460XXH was bottomed out. THis fish kicked my ass for about an hour. Finally got him up and how sweet it is. This one taped out at #260, went 275 at the dock. I also caught another big one during the evening. Kamakaze fish, it took less then 15 minutes with not much effort, it taped out at #260, went 266. I also caught one other at #250. We plugged the boat in 3 days and were cutting off pretty much everything after that boat unless it was a really nice fish. I forgot how many we cut off over #200, I think around 40. The first 3 days were pretty good, then the fishing got a bit slower, even though the slowest would be considered an excellent day in a normal year. Words can not describe how incredible this trip was. Great bunch of people, I learned a lot. Crew was excellent. I am about to fall asleep so I will post some pics and more info tomorrow. 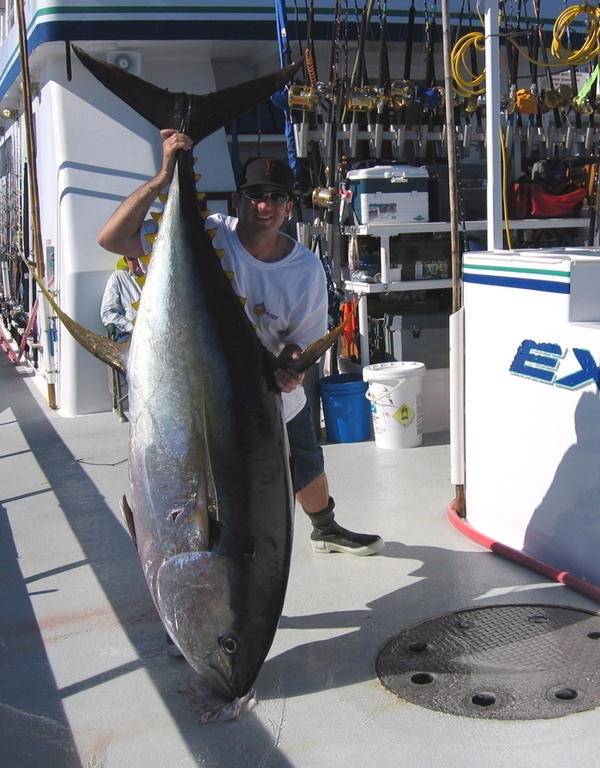 
Come on man. Hook us up when you get back to reality!

I have to load all the pics,, just catching up at the office. Will get it done...

Sounded like an epic trip!! Can't wait to see the rest of the pictures.

Dude it might take months maybe even years to get back to reality. You can see/read where he got side tracked and probably started drifting off day dreaming about a good fight. I agree lots more pics Justin way stoked for you bro...

275lb MOO once they get like over 270lb its a different animal all ballooned out.

I would say they got some good phootage for a sequel. :Rambo_Thr

Alright here are the links to the pics. Lets see if I can do this.

I have a lot more will try to load later, just really busy...

Bill Roekers report on the trip..

Congrats on the fish.

I hope to someday go on a lang range boat....

Boat
Anything I can row

Boat
None at the moment

Im just floored at the quality of all these fish this year. Really sucks that my boss doesnt see it fit to give vacation, what I wouldnt do for some fresh ahi steaks.....Yummm. Ive got to get my ass on one of these boats. Doesnt it seem like an awful long time to be on a boat with the same people though?slap:

Great report Justin! Stoked you were able to get on a trip as epic as that was! Post more pics!
C

I appreciated that you waited for the milk, I was on the Qualifier 105 and appreciated the deliver that you guys made to us on Friday night before we headed home. Glad to see that you got into the big fish.

ThrasherWhacker said:
Doesnt it seem like an awful long time to be on a boat with the same people though?slap:
Click to expand...

When everyone is having a good time, you guys become friends really quickly, and then its over too soon.
Expand signature
Some men will fish their entire lives without knowing its not the fish they are after - H.D.T.
[SIGPIC][/SIGPIC]

stand_up_angler said:
When everyone is having a good time, you guys become friends really quickly, and then its over too soon.
Click to expand...

HIt the nail on the head.

Boat
AT THE BOTTOM OF PACIFIC

15 DAYS SOUNDS LIKE A LONG TIME WITHOUT A FLUFER . DID YOU MAKE ANY STOPS ? GREAT PICS .
Expand signature
DRINKS FIRST THEN FISH

Had A great time fishing with you Justin hope to see you there next year.

Hey Ken, welcome. I was hoping your fish was as big as Dan's. It sure was a fat pig. Way to go.
Question is, how are you guys gonna top this trip?
Expand signature
Pro staff for Okuma
Show hidden low quality content
You must log in or register to reply here.
Share:
Facebook Twitter Reddit Pinterest Tumblr WhatsApp Email Link