My first time on the boat. Captain Patrick was solid, deckhands were great. Food was as expected, burritos, burgers, steaks. Bunks and galley were huge. Only bad part of the boat was the PA system. It was garbled just about the entire trip so getting info from captain about what he was seeing, what to throw out, was like a foreign language.

We headed to SCI Friday night with about 28 passengers, some rough seas which caused at least a few to get sick. On Saturday morning/day, picked off a few BFT in the 30-50 lb range. Tried heading west and I had heard "Tanner" mentioned, but seas were pretty shitty. Headed back to SCI Saturday afternoon with the plan to head back out west right after dinner. We were asleep, and apparently we stayed asleep as the boat went right back to a nice calm cove at SCI with a bunch of other boats, because weather/waves were beating the crap out of us. On one occasion, while deckhand was on the bait tank tossing sardines, I believe he was airborne. Freaked him out a bit. Sunday, we fished SCI for a couple hours, made another run west, and turned right back to SCI for remainder of the morning until about 1 p.m. and started heading back in.

No limits of anything, but had probably a dozen or more YT, in the 8-14 lb range, several smaller grade bonito and a handful of decent Calicos. Two halibut but one was short so only hali went home with someone.

Here's a pic of my neighbor, first overnight trip and his FIRST YT/bonito ever. He also landed a keeper calico, another first. I was very stoked for him. I took home a couple bonito (grateful) and some pros on the boat who fish weekly, gave us their YT and bonito which we were very grateful to have. And only had to reach out for the wall across from my top bunk once to keep from rolling out!!! All in all, not a horrible trip considering the weather. 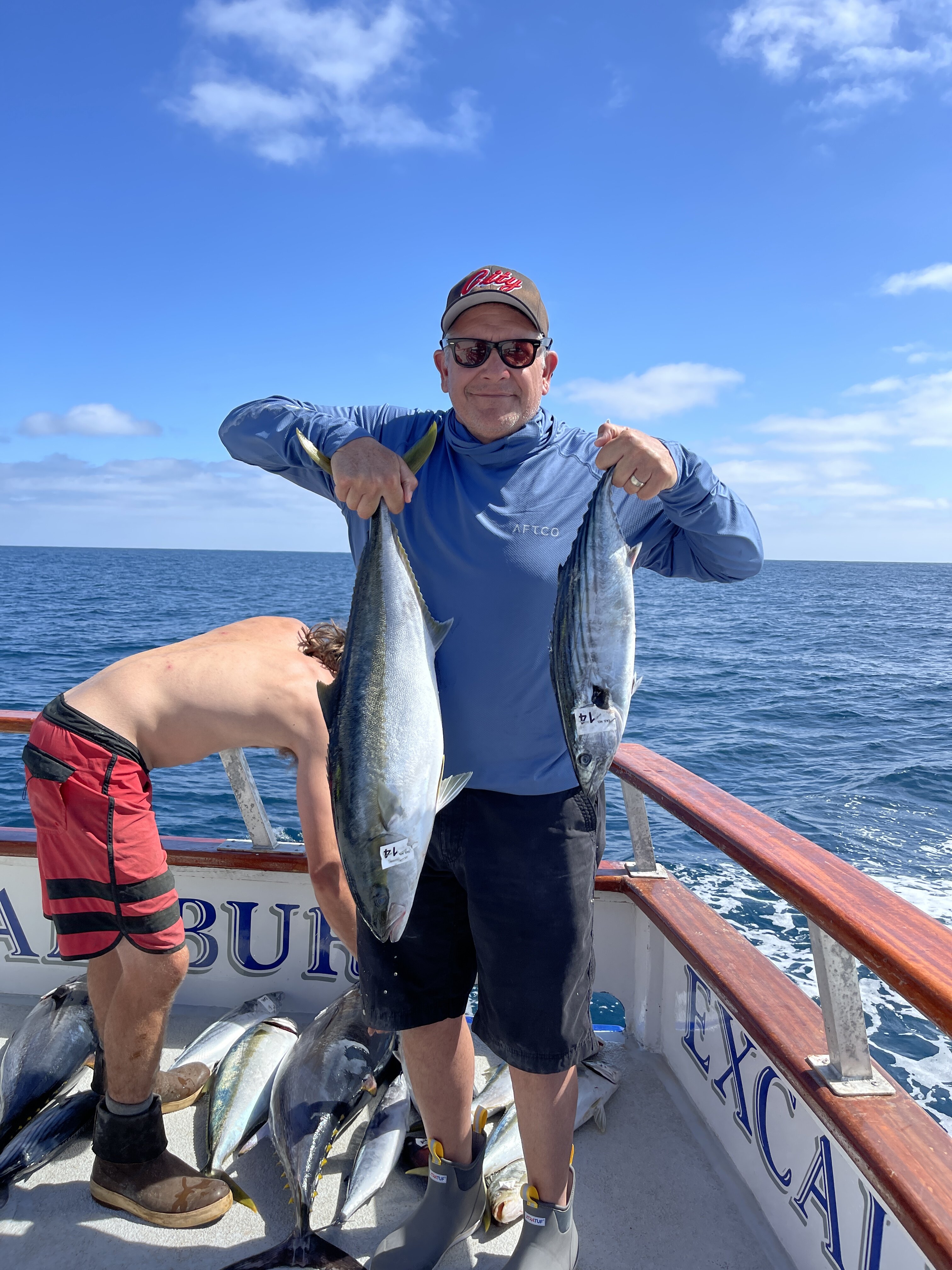 Great report and info. Glad you and others caught some fish. Many out there did not. Good job.
Reactions: woodfish330
Upvote 0

Nice report the trick is to stick your foot up and lock it on the bunk or celling above.
Toggle signature
JC
Reactions: kevine-theangrychinaman, Tunahead and woodfish330
Upvote 0
W

If not nice post and picts Brother. Can't always be "limited" out.... right? Be safe.
Reactions: kevine-theangrychinaman and Tunahead
Upvote 0

If not nice post and picts Brother. Can't always be "limited" out.... right? Be safe.
Click to expand...

I think you may be thinking of someone else. Screen name comes from my old paintball nick name. Never owned a boxster. I have no issues with a couple bonito. So far this season, I've been very blessed as far as fish. Regardless, it still beats working!!!
Reactions: woodfish330
Upvote 0

it looks like we have to wait till late September for the BF to show up again .
Hoping for the YF show to get underway.
Upvote 0
Show hidden low quality content