So...84 y/o Dad and I made it down to the Cabrillo Marina slightly before 5:30 AM (our usual start time...usually) and we were worried about all the bad weather reports, afternoon small craft advisory and high winds at the island. The wind was rippling on the water in the marina and was forecasted to only get worse, We sat and pondered about crossing to Catalina and ended up sitting in our slip, talking to the our neighbor (waiting on his crew) until around 7AM. The game plan was to wave the white flag, fish off the back of the boat and head home in time for a late breakfast...

The wind seemed to lay down as the sun came up and our neighbor was going to head out, so (under peer pressure) Dad and I called the audible and shoved off...

Quick stop at SP bait for some decent 1/2 cured sardine and along with 5 pounds of fresh dead squid we headed out of the harbor. Fog was thick, but the seas were not worse than normal. Pointed the nose of the Shamrock towards the Isthmus and hailed a few boaters on 72. The replies were very negative and the decision was made to waste the bait up the PV coast.

In the thick pea soup, we put the Fantom Garmin radar to the test and it worked very well. We dodged a few bullets and ended up at Rocky Point, pretty much alone, in reasonable seas and almost NO wind., Water was 65 and the current laid (layed?) us right towards the beach. Threw out some chum in the dirty green water and unexpectedly, the fish reacted. It was pretty consistant on the short barracuda and calico bass. Actually, wide-open on light line and a decent sardine, as the small barries would rip you up every time.

Pulled up the anchor twice and moved from 80 to 55 ft (where the calicos bit very well). 12- 20 lb test and #2 hook worked very well. The Tady 45 and also 3/4 oz plastics were getting bit, as well. At one point it was wide open and an absolute blast. Maybe only 10- 20 percent keepers, but the action was great. Aggressive birds, which there are always at RP and boils of small barries lifted our spirits and we worked hard. It was old fashioned light-line fishing, in the waters I grew up in.

Pop gets hammered on the 12 lb and lands the day's jackpot. We released all of our fish... 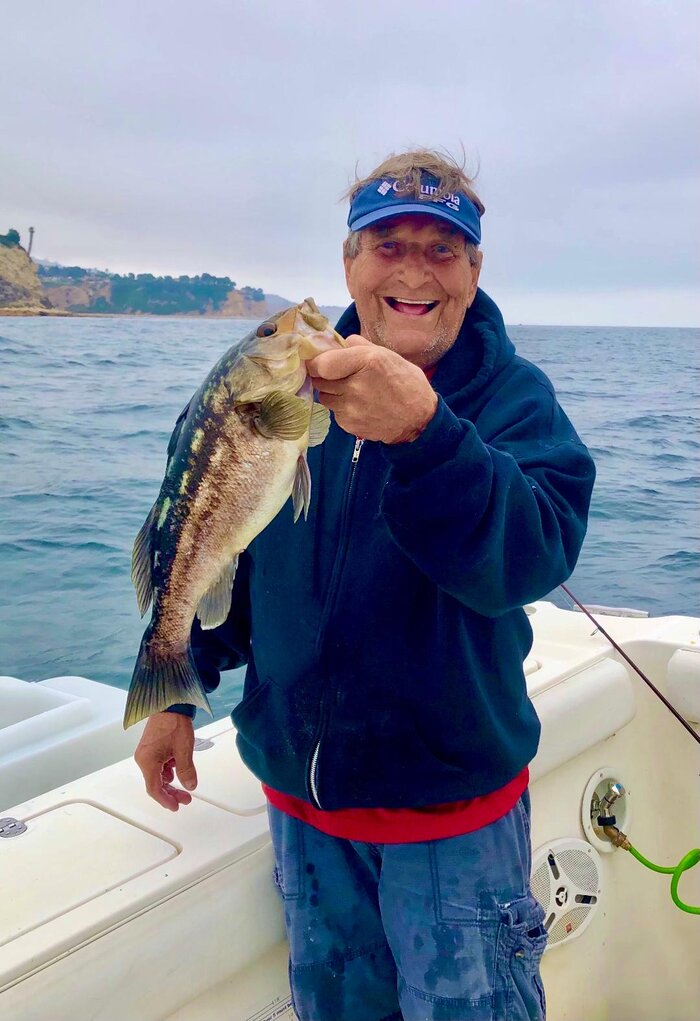 As usual, Dad packed us lunch. Couple of sandwiches, Feta cheese, cucumbers and tomato salad...all (except the cheese) grown in his backyard. Dolmathes (Greek grape leaves with good stuff in them) and some other goodies. He always hits up the market and hooks up some tasty eats. On all our trips, we take the time to put the rods in the holders with clickers on, to have lunch. 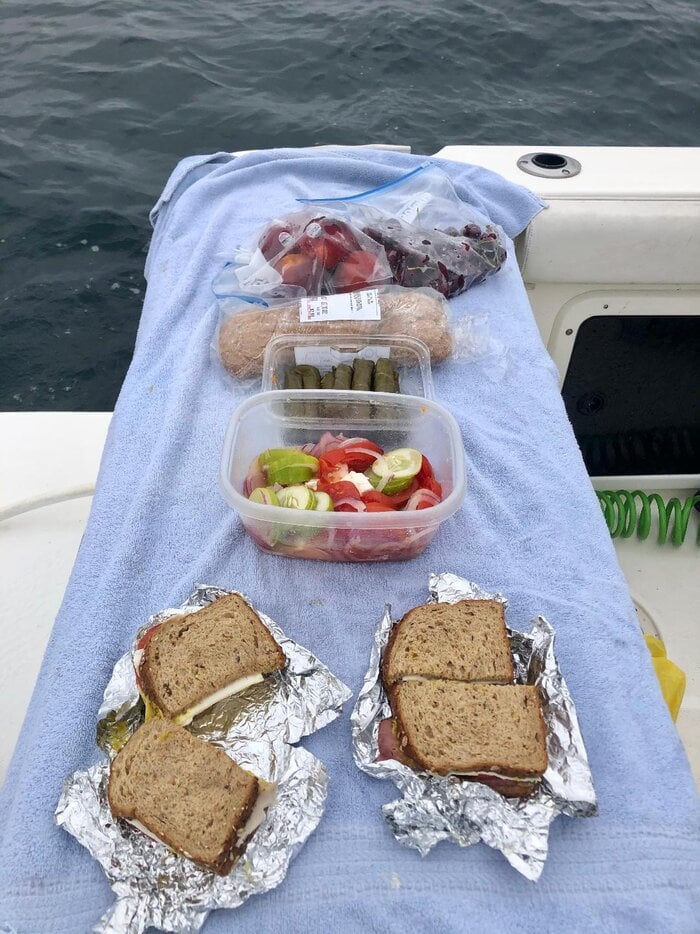 The weather came up around 2 and we were back at the dock by 3.

Glad we made it out.

Tight lines and all the best.

Wow, that turned out to be a great day. Your dad looks so stoked. I still have my dad at 81 but he was never a fisherman. You’re lucky to have each other.
Reactions: Donkey Nick, djd35de, Ryan js and 2 others
Upvote 0
D

Nice report! Glad to see you and your dad getting it done.
Reactions: Donkey Nick and Tunahead
Upvote 0

Glad the weather laid down for awhile. Lot of wind this year.
That lunch looks like worth the trip anyway!

Nothing wrong with roping in bass all day. Sounds like a perfect day after all. All while avoiding a back adjustment coming back from Cat. Your Dad is cool.
Reactions: Donkey Nick
Upvote 0

Thanks for the report.
Toggle signature
-AH
I get skunked and I can not lie
Reactions: Donkey Nick
Upvote 0

Outstanding!!!!!
Toggle signature
Sometimes I wish i was a bird so I could fly over some people, and shit on their head.
Reactions: Donkey Nick
Upvote 0

Hey Ryan. Thanks man. Means a lot and appreciate it.
Upvote 0

You know, I am up for adoption at this time of year!

Congrats on another fun trip with pops!
Toggle signature
Go ahead, make my day...

Islands Catalina 7/3/21 with some paddy yellows