Left shelter island at 5 yesterday morning with my good bud Michael and an awsome scoop of bait. South wind was already up and it was a sporty ride down to the zone. We stopped on a paddy about 10 miles short of the 371 and hooked a couple nice sized yellows, Mike landed 1 and we broke off a couple that ran straight to the kelp and busted us off.

We continued down to the zone and about 4 miles short of the 371 there was a group of boats drifting flyers. We slowed down and started looking around. Off in the distance we see someone's flyer get destroyed.

All of the sudden a group of birds and fish pop up in front of us. These fish looked to be 80 to 100lb fish so we stopped and threw a scoop and the sea erupted. Both of us grabbed our 40lb outfits just to see if they would take a sardine, big mistake! We both got bit within about 30 seconds, mine chewed off instantly but Mike's stayed buttoned. He hooked his on a Trinidad 20 with a calstar 800h and a small number 1 j hook and 40lb Blackwater .

The fish dumped all the line as fast as I have ever seen but stayed up high so we ran towards to get line back on the reel. Little did we know this fish was much bigger then the fish we saw up on the surface. This fish was mean it would take long runs down deep then shoot straight to the surface over and over again. It took us close to many boats with their kites set up and was super stressful trying to keep this fish out of other peoples gear i apologize to anyone we got close too. The fish never once layed down on it's side and settled in it was a freak of a fish. 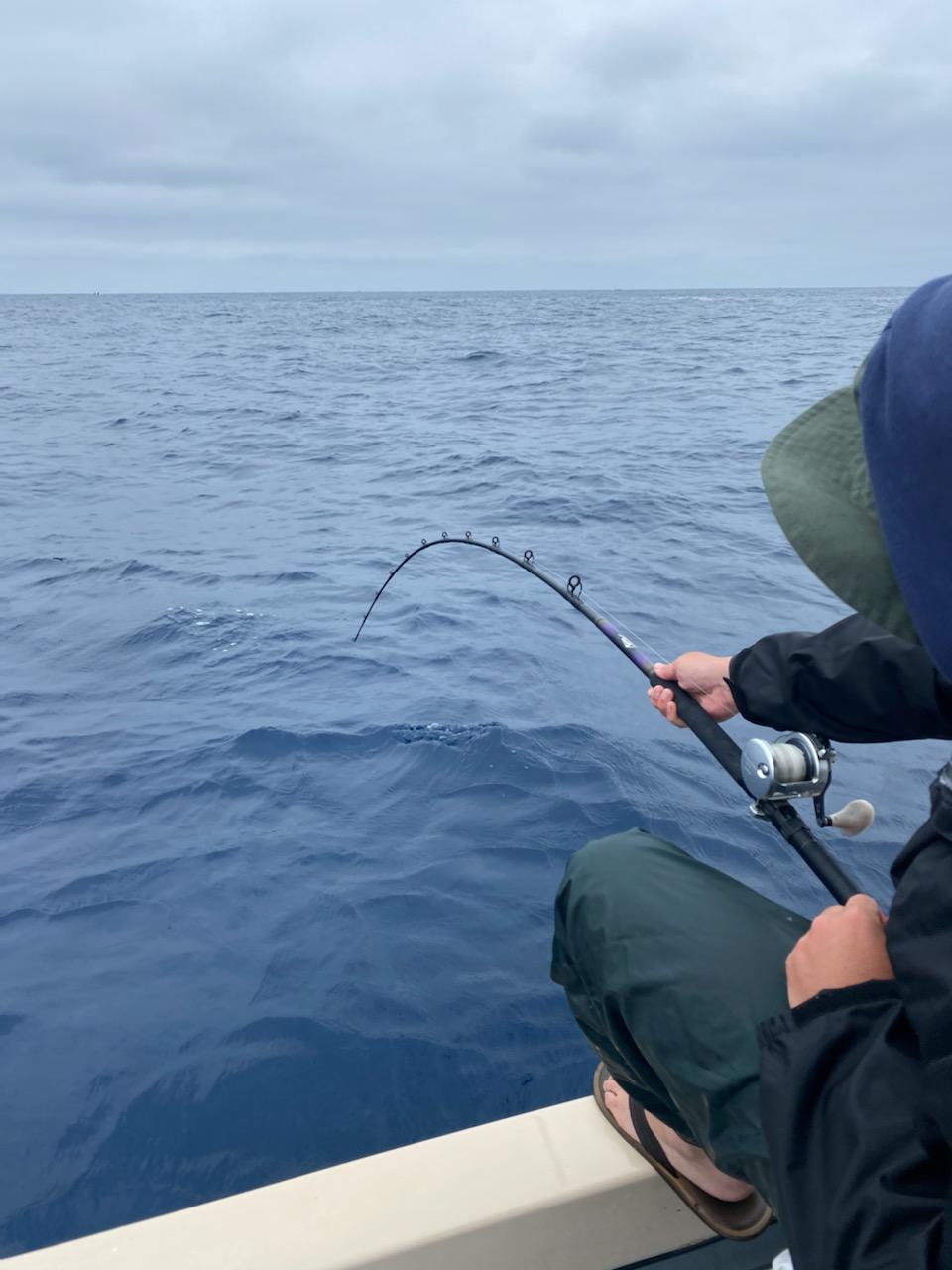 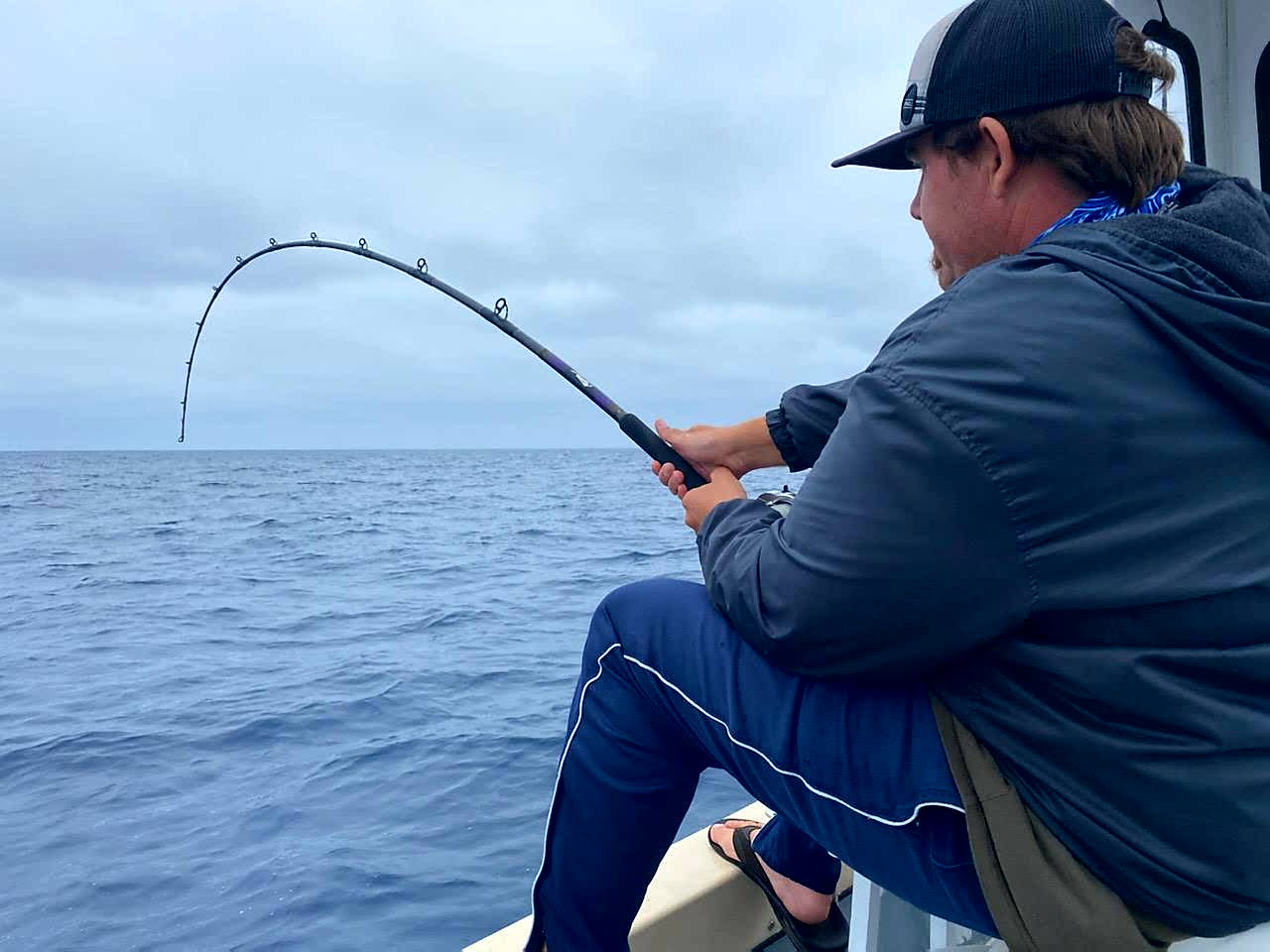 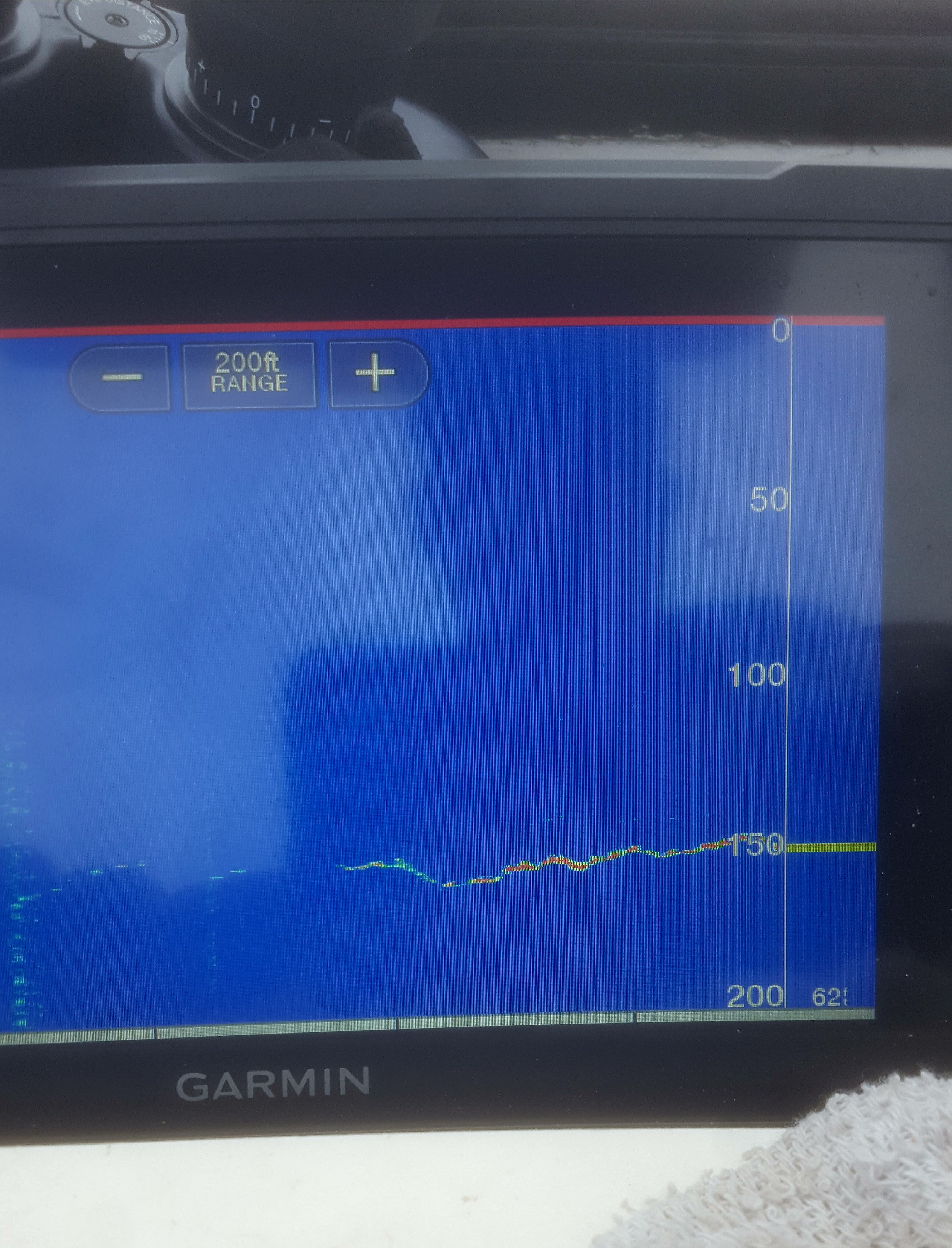 After what seemed like an eternity the fish came up and stayed up still swimming straight up and down. I was on the fish and Michael drove to the fish to try and stick it. Finally the fish swam within gaff reach and Michael took a swing at it after a trying battle. The gaff stuck just under the skin near the tail which made the fish go ballistic. Almost pulled him in while throwing buckets of water in my face which kept me from seeing what was happening. I reached for the other gaff but the fish knocked it overboard. I witnessed the gaff slip from the skin of the beast and the line had a loop around the tip of the rod which broke and the fish was gone.

We both sat in disbelief of what just happened and talked about what We could have done differently but didn't matter at this point. We hooked the fish at 8:45 and it was now 1:15. This fish was well over 200 and prob closer to 250 and was a freak. It was extremely humbling and will haunt us both for awhile.

We headed to the barn after this and ran into a wide open paddy for all you wanted quality yellows, but neither of us were enjoying it. We called in a couple boats and headed for home defeated. 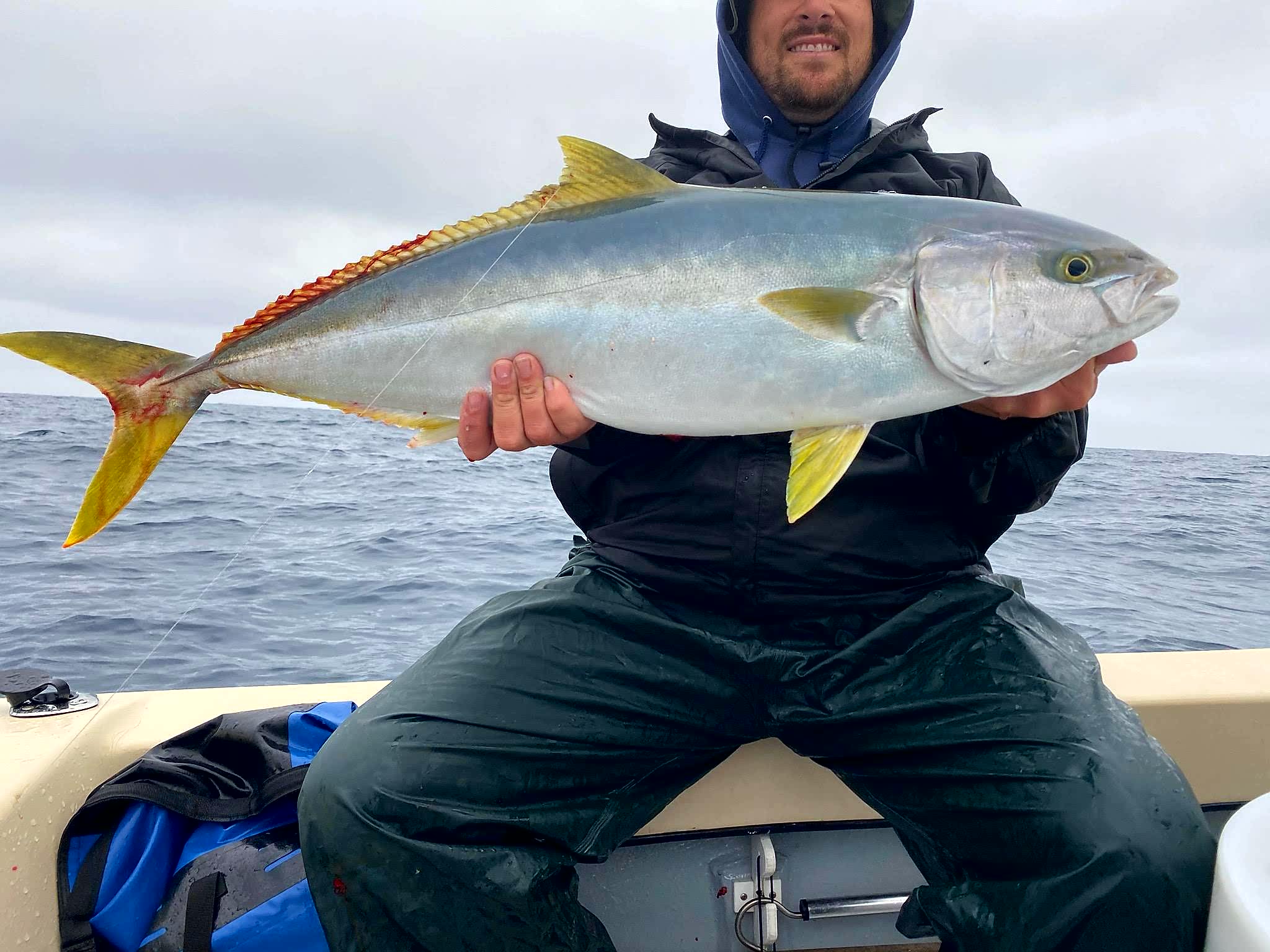 What a day buddy I will never forget this one. Area we got bit in was 13 over 30. And kelp were in 20 over 29 area. Good luck and stay safe!
Reactions: 99Phishing, Jaact, xGUNS.UPx and 86 others
Upvote 0 Downvote

All I can say is WOW....
Reactions: JamesTaylor, mkfriedrich, Hardcor and 1 other person
Upvote 0 Downvote
R

What a day!! One that will never be forgotten!
Reactions: mkfriedrich, Hardcor and longboard85
Upvote 0 Downvote

Great story! I feel for you. I have a very similar story fighting an estimated 200-250 lb bigeye on a stock Penn 113HLW with straight 50 lb mono for 4.5 hours, only to lose it at gaff when the leader touched the swim step. It sucks now, but those are the experiences that keep you going back out. You never know what you may encounter.
Toggle signature
________
Reactions: mkfriedrich, Hardcor, Chuck Roast and 2 others
Upvote 0 Downvote

Shit happens... some battles are won while others are lost. Had to be thinking you put the wrong gear out as we have all done the ol knife to a gun fight. Lick you wounds and get back at it. Thanks for the great report, sure beats sitting at home regardless of the outcome.
Reactions: moezmoe, Tom123, mkfriedrich and 2 others
Upvote 0 Downvote

That's a heartbreaker. But congrats on the hookup. You'll be ready next time.
Reactions: mkfriedrich, Hardcor and longboard85
Upvote 0 Downvote

All you can do is throw out another bait .

Great story. Love your posts. Sorry for your loss on this big boy. I think I am going to wait for better weather next week. Hope to see you out there.
Reactions: mkfriedrich, Hardcor and longboard85
Upvote 0 Downvote

Man that sucks. We have laded a few in the 150# range this year on 40#. Not fun.
Reactions: mkfriedrich and longboard85
Upvote 0 Downvote
L

Heard you on the radio,what a long epic battle. No big bft for us. Just some 25 lbs yft. Gad you got some table fare with the yt. We showed up a little late to the party and missed the morning bite. On my buddies boat and definitely rough out there with that south west wind. Great effort and story. This will make you more determined than ever. Going out next week also. Need a big bft havent caught one this year yet. Aloha
Reactions: mkfriedrich, Hardcor and longboard85
Upvote 0 Downvote

Those big boys will definitely humble even the most avid fisherman. Nice story Cody, you will get em next time!
Reactions: mkfriedrich, Cbaldwin, Hardcor and 1 other person
Upvote 0 Downvote

Nice buddy boating with you guys yesterday. I cried a little too when you made the call. I can verify the length of battle since we were on the horn when I heard Mike screaming in the background like a little girl lol. "Uh, we gotta go" *click*

You'll get a redemption shot soon, and you'll still have this story for the grandkids....
Reactions: Tom123, mkfriedrich, Hardcor and 1 other person
Upvote 0 Downvote

Also, surfing that gnarly short period south wind swell on the way home and stuffing my bow into the wave in front of me a hundred times was no bueno. I was super worried about you guys on your sled....
Reactions: mkfriedrich, Cbaldwin, Hardcor and 1 other person
Upvote 0 Downvote

I hate when that happens.
Reactions: mkfriedrich and longboard85
Upvote 0 Downvote

The ol’ “oh if I would have” scenario. Just leaves you wanting more! Thanks for the report.
Reactions: mkfriedrich and longboard85
Upvote 0 Downvote

What a great adventure for you two. If I was hooked in to a monster Bluefin on forty pound you two would be the guy's I would trust. It's a great story of an epic battle we all want bad, now pull your chin's up and do it again.
Toggle signature
The Killer in me is the Killer in you
Reactions: Microbait, gonzo25, Hippie and 6 others
Upvote 0 Downvote

Baja Belk said:
Also, surfing that gnarly short period south wind swell on the way home and stuffing my bow into the wave in front of me a hundred times was no bueno. I was super worried about you guys on your sled....
Click to expand...

Yea Mike it was sporty on the ride home for sure but we didn't get wet, my boat rides pretty high in the bow when on plane. Did you get any yellows of the kelp after we left?
Reactions: Hippie
Upvote 0 Downvote

Wow, that sounds like an outstanding tag team fighting the fish and boat handling on a #40 Single speed reel. Thanks.
Reactions: longboard85
Upvote 0 Downvote

Hardcor said:
What a great adventure for you two. If I was hooked in to a monster Bluefin on forty pound you two would be the guy's I would trust. It's a great story of an epic battle we all want bad, now pull your chin's up and do it again.
Click to expand...

Yea Corey I've been searching for that bite on my skiff for some time now and wish it was on the right gear! Michael and i did everything we could but just wasnt meant to be yesterday. Gonna hit it again soon once this few days of weather passes.
Reactions: Hardcor, Hippie and rick rouland
Upvote 0 Downvote

That's a whole different kettle of fish out there this year. I guess we can leave the 30 lb and the #4 mutus in the box for a while.
Reactions: longboard85
Upvote 0 Downvote

longboard85 said:
Yea Mike it was sporty on the ride home for sure but we didn't get wet, my boat rides pretty high in the bow when on plane. Did you get any yellows of the kelp after we left?
Click to expand...

Nah, I gave it two good drifts, one off it, and one right in it, but that aluma boat was on it pretty tight too and I didn't want to encroach. I bailed and got my token yellow at Pukey on the way home. Took all of 5 minutes so it was worth the slight detour. Skunk-buster. Now I just need to throw away this kid's party helium tank and fix my broken kite haha.
Reactions: rick rouland, mkfriedrich and longboard85
Upvote 0 Downvote 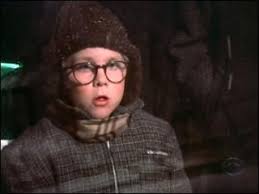 Yeah we heard you on the radio too. Man, getting a fish like that to gaff on that gear is a hell of an achievement, even though it just makes the ultimate result that much more painful. You're a good fisherman and you'll get him next time. When you do, I hope its on the kite rod, he chokes the hooks the whole thing takes you 10 minutes from hookup to high-fives. You deserve that much.
Toggle signature
FIN.
Reactions: JamesTaylor, SouthBayKiller, islandhooker and 4 others
Upvote 0 Downvote
Show hidden low quality content
You must log in or register to reply here.

Upvote 0 Downvote
B
Offshore Find it and its over