Cousin Mike came out from St. Louis to fish with us. We left on 11.01 and returned on 11.08
Crossed at Mexicali East at 6:00 am, declared our 3 tires and headed south. Mexico 5 going south is a great run as it is in good shape. KM 57 out of Mexicali is getting 10 km of new asphalt going south. The Arco station by Rockodile (San Felipe) now has locked bathrooms. I asked about it and was told so many people stopped in and didn't buy gas or buy something in the store but ran them out of toilet paper and left messes that it was needed.
8 days at the house and could only fish 3 of them as the wind was above 15 mph and hit 22 several times.
1st fishing day we fished out side San Juan Cove at the high spot we call Bill's Spot. Caught several 10-12lb yt and the bite turned off in 1/2 hour.
2nd fishing day we went up to the Bajo (Guadalupe Reef) and hooked up very large bonita and large yellow tail. 2 bull sealions worked us over and we wound up with 5 yt up around 20-22lbs and enough bonita to pressure cook 12 jars. Fish were high in the water column at 50-75 ft. We thought bonits were driving bait up to the birds but it was yt and the sealions were hungry
3rd fishing day we went back to the Bajo (205-280 depth high spots) and landed 5-6 20-22lb yt.
All fish were caught on jigs (Salas 6x blue/wht and scrambled egg). Multiple bonita seemed to prefer a Deadhead in the glitter blue)
Neighbors boated a dorado trolling as well.
We usually stop to take photos by Coronadito and one of the Zooboys boated a very good size cabrilla. Didn't fish Coronadito as the flies and gnats were oppressive.

Flies and gnats showed up on the the last day in force.

Work continues on the road into the Bay. The long bridge near the turnoff to the old Dump was graded on both sides to even out the washboard. No real problems on the rest of the road but, as always, be careful: safety first.

We came back through Tecate via La Rumarosa. Line going down the hill to the border crossing has some jarring potholes!!! 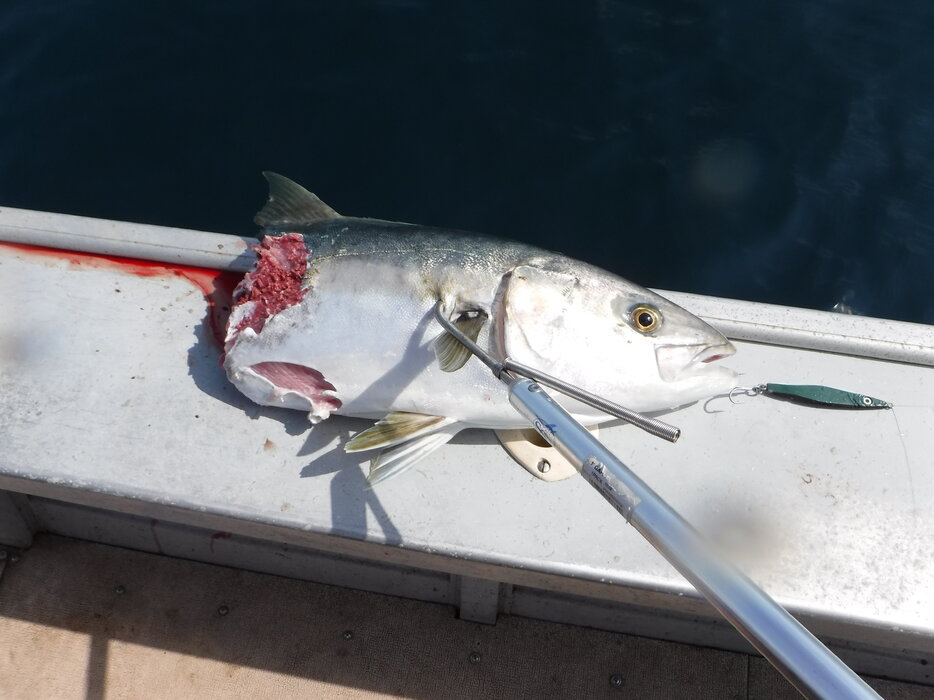 See you back down on the Bay December 1 for a week
Last edited: Nov 16, 2022
Toggle signature
DCW
Reactions: Joe OO, jiggermyster, BornFisher and 8 others
Upvote 1

Great report. Glad ya got out fishing a few days.
Upvote 0

Slather that yellowtail head with picante sauce and chuck it back to the dog
Last edited: Nov 9, 2022
Reactions: Dogman619 and Leslie. Christensen
Upvote 0

Super stoked to read a current BOLA report. Thank you for always writing up something thorough and timely. I'm thinking 11-01 to 11-08 though? I'm watching the wind reports and hoping to get down around thanksgiving time, we will see, I lagged this summer.
Reactions: surf launch
Upvote 0

This fall has been consistently extra windy at Gonzaga and L.A. Bay, much more so than I've seen in the last 15 years or so. Sure has made it tougher to get out on the water down there.
Upvote 0
Show hidden low quality content

Zooboys vs. Westies in LA Bay

Zooboys Unfinished Business at the Bay