Got a a last minute invite to fish a charter with only 17 anglers aboard the Constitution. Boarded Thursday evening and spent the night in the Harbor as our starting point was only 15 miles from the point. Friday we scratched away at the smaller grade YFT's and some jumbo skippies and ended up the day with maybe 40.

We made the move to SCI during the evening. Metered around and got the Kite up at grey light. First bite was on a FF! Fish was mean and almost spooled the angler on 80 lb, I believe. Had to chase it down 3 times. During the battle a Kite fish was hooked up on a dead flyer. Keith did a great job chasing the first fish with a second hanging. The kite fish was landed first and taped out at 250, followed shortly by the FF fish which taped out at 313! Awesome job by the angler Zack.

Got the kite back up and had a couple blow ups. One stuck, but the fish was lost due to angler inexperience/error. In the meantime another fish was hooked on a FF and 60LB test and landed in short order by one of the charter masters Dave, who was a very good angler. Taped at 105lb.

The final hook up of the day was again with a dead flyer on the Kite. Big blow up and again this one needed to be chased down. Once we caught up to it, it came in pretty quickly. I would guess 50 minutes. Taped out at 325!

Fished with some great dudes!!

Epic trip!!!! Thanks to the Constitution as well as Doty Bros and Pioneer Pipe for invite. 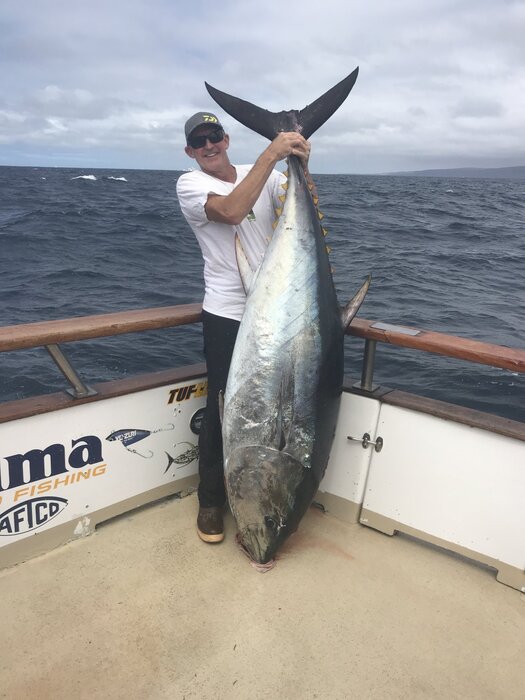 Thanks for the report. Great catches
Upvote 0

Nice
Thanks for sharing
Upvote 0

Boat
Anyone that takes me

It was a pleasure fishing with you John and thanks again, that was definitely a stand up move on you at the end of the trip. It was a fun trip for sure with plenty of rail space. Glad you had a great time.
Reactions: Tunahead
Upvote 0

NICE FISH John. Glad you all had an epic trip.

Nice tuna. Thanks for the report.
Upvote 0

solid72 said:
It was a pleasure fishing with you John and thanks again, that was definitely a stand up move on you at the end of the trip. It was a fun trip for sure with plenty of rail space. Glad you had a great time.
Click to expand...

Thanks again Dave. It was my pleasure fishing with you guys and it was the least I could do. Hope to share the rail with you again soon.
Heading out Sunday on a Red Rooster 8 day. Wont be keeping many fish as my freezers are pretty full. Hoping to get a few Wahoo. Hit me up if you want some wahoo or YFT and I'll try and tag some for you.
Reactions: solid72
Upvote 0

Constitution been killing it this season hard work and persistence capture the big ones.
Upvote 0

So dope
Upvote 0
Show hidden low quality content
You must log in or register to reply here.