I have a coworker Dan who's been wanting to go fishing all summer but has limited time off as he is finishing his surgical training. He finally got a couple of days off and also had his dad Paul fly out from Ohio and they wanted to fish tuna. This past week it looked like the bite was making a small rebound so we booked the "Big Bird".
Being late in the season and with the recent low counts, we ended up with a light load of 17. I think few of those guys came from another boat that cancelled due to low reservations. Capt Jimmy was driving. Lurch and Tyler were on deck and Greg was in the galley. We loaded up with the smallest bait I've seen all year. 4" sardines with a few 5" mixed in. Greg called everybody in to the galley for the rundown. They said there were mixed schools of YF/BF from 30 to 100lbs on the grounds and that light line and small hooks would be key. #2 and #4 sized hooks and 25-40lb line were the advised setups to use. The crew made sure everyone was rigged up and we hit the bunks excited for the next morning.
We woke up to beautiful weather. Mild seas and a slight breeze.

The fleet was spread out looking for fish in the same area a few miles apart.

The search began and we soon pulled up to a nice sized Kelp paddy. I gave Dan and Paul the rundown on using the conventional gear, picking baits, fly lining and following their lines. We hooked 1 rat yellow on the paddy and then took off to look for more fish. Jimmy finally found a school and got them to react to the chum. Soon we started seeing Big blow ups ! These were no 30lb fish. Fish didn't seem to wanna bite 30lb so guys started dropping down. Finally "Fresh One !"

The fish was hooked on 25lb and it was a big one ! The angler settled in for the long fight while we continued to see big fish blow up in the chum. After awhile the fish got worked up to the boat and landed

I was switching between 30lb flyline and 40lb sinker rig with no luck. Several angler got bit on 20lb and chewed of. I had a Calstar 800lx and Fathom 12 with 20lb flour. After seeing the fish, I switched out the top shot to 25lb and sent out a good swimmer. I soon got bit and put the reel in gear. Fresh One ! I immediately handed of the fish to Paul, gave him some coaching on fighting the fish, and told him to settle in for a long fight.

This was a nice fish and took and few nice long runs. Greg got with him and continued to give him instructions and encouragement.

After about 20 min the fish got straight up and down and the 2nd half of the fight started. We hung a couple more big fish as well as having several guys chewed off and one guy spooled !

Paul was at a stalemate for awhile and then Greg helped him to gain some line Wicked Tuna style !

Soon after we got color. 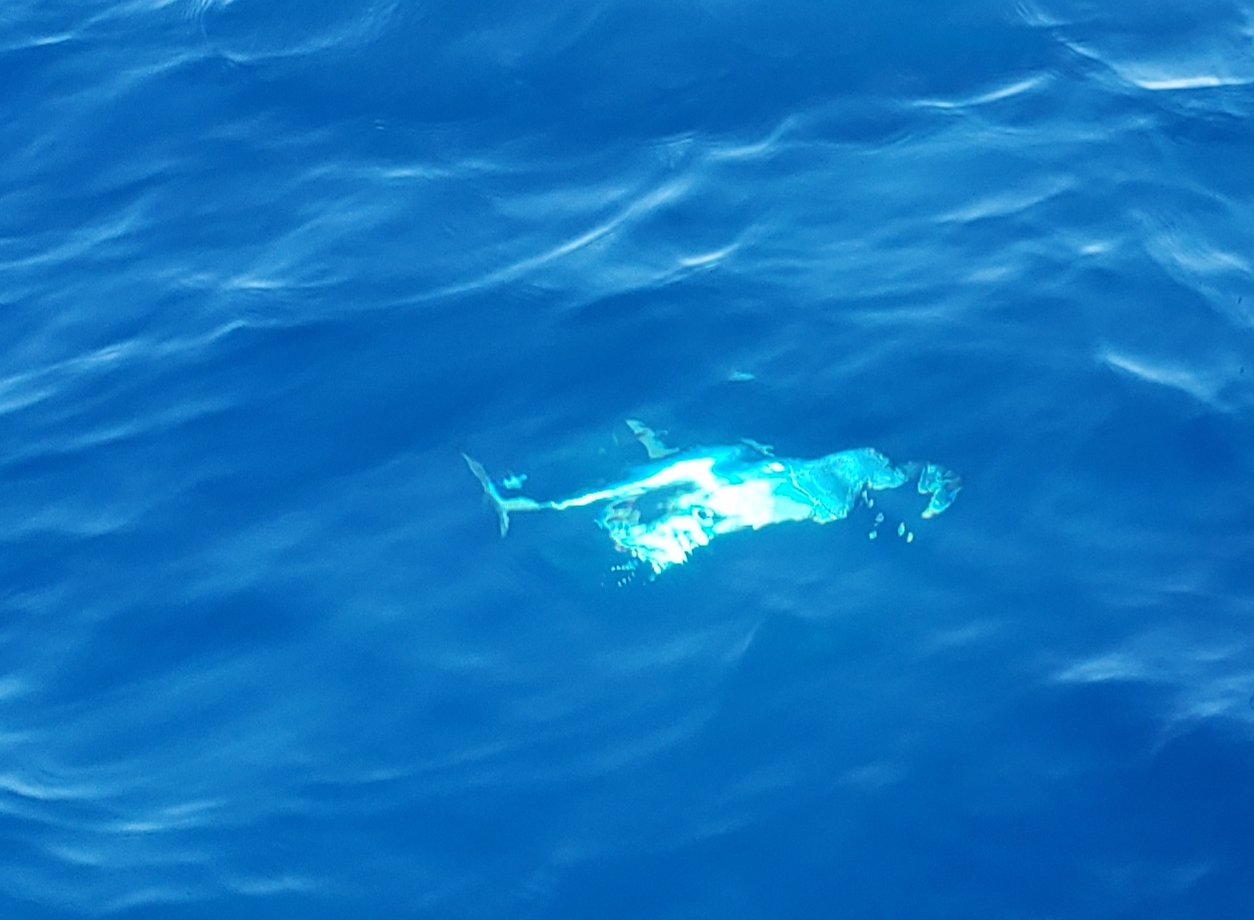 Tyler a gaff into the fish and Paul got a quality model for his first ever tuna. 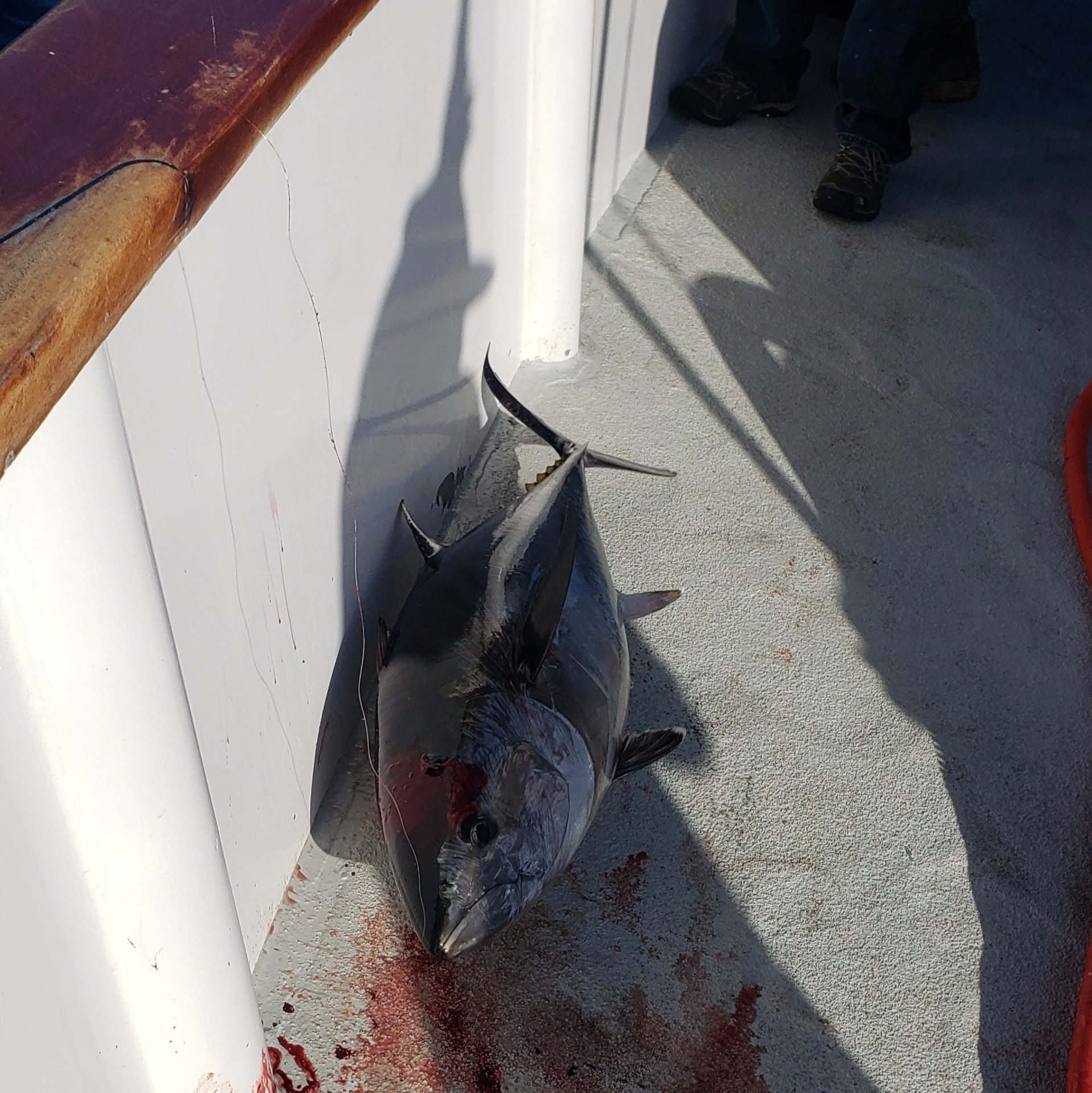 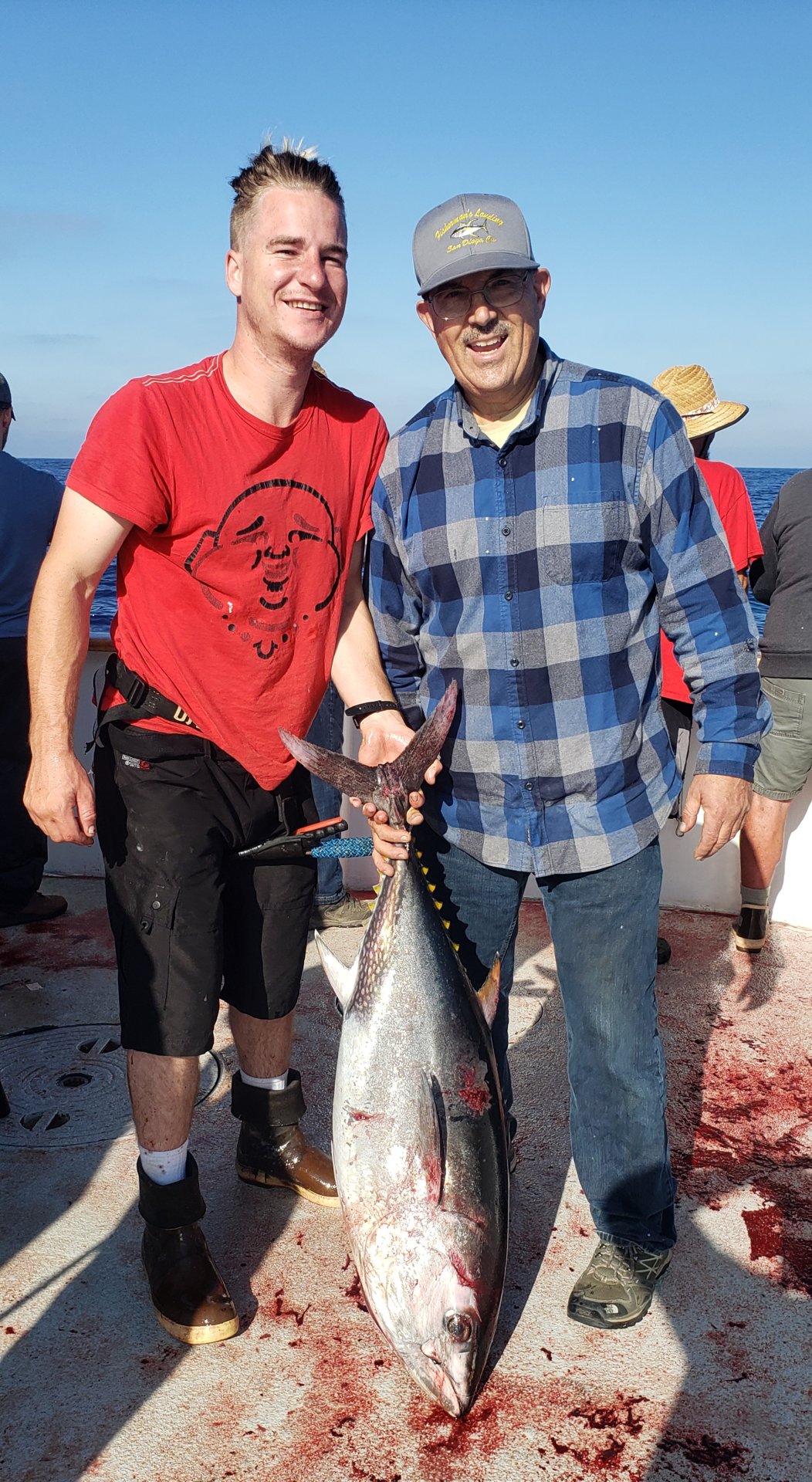 The fish stopped wanting to play and we took off to look for more with 4 in the hold and about twice that many lost. In talking to some of the casualties, I was surprised that most of the guys were not fishing circle hooks even after losing a couple of fish. We drove for quite awhile trying to find some fish but they were staying deep. As we got into the afternoon, we started locating schools of fish Jimmy was dumping bait of them but they would not stay with the boat. Finally we got a school to come up and start to blow up in the chum. One guy hooked up on another nice one on 25lb.

The guys had been on their fish about 30 min and I get a nice swimmer out on my 25lb set up. Jimmy gets on the horn and says "Don't fish anything less than 30lb". "These are bigger fish and we dont have much time left". 5 seconds later I'm on. I immediately had the fish off to my buddy Dan and get him settled in.

The first fish hooked gets landed at about 40min and several others get lost. Dan's fish is trying his best to stay away from the boat and Jimmy says we have 15 min left before we have to go as we are already late coming back. Greg gets with Dan and they start really trying to get it to the boat. As luck would have it, we get several more hookups. It's the end of the trip and Now they wanna bite !

Greg does a great job keeping the pressure on. And we get him coming up to gaff.

It's a nice yellowfin. STOKED ! 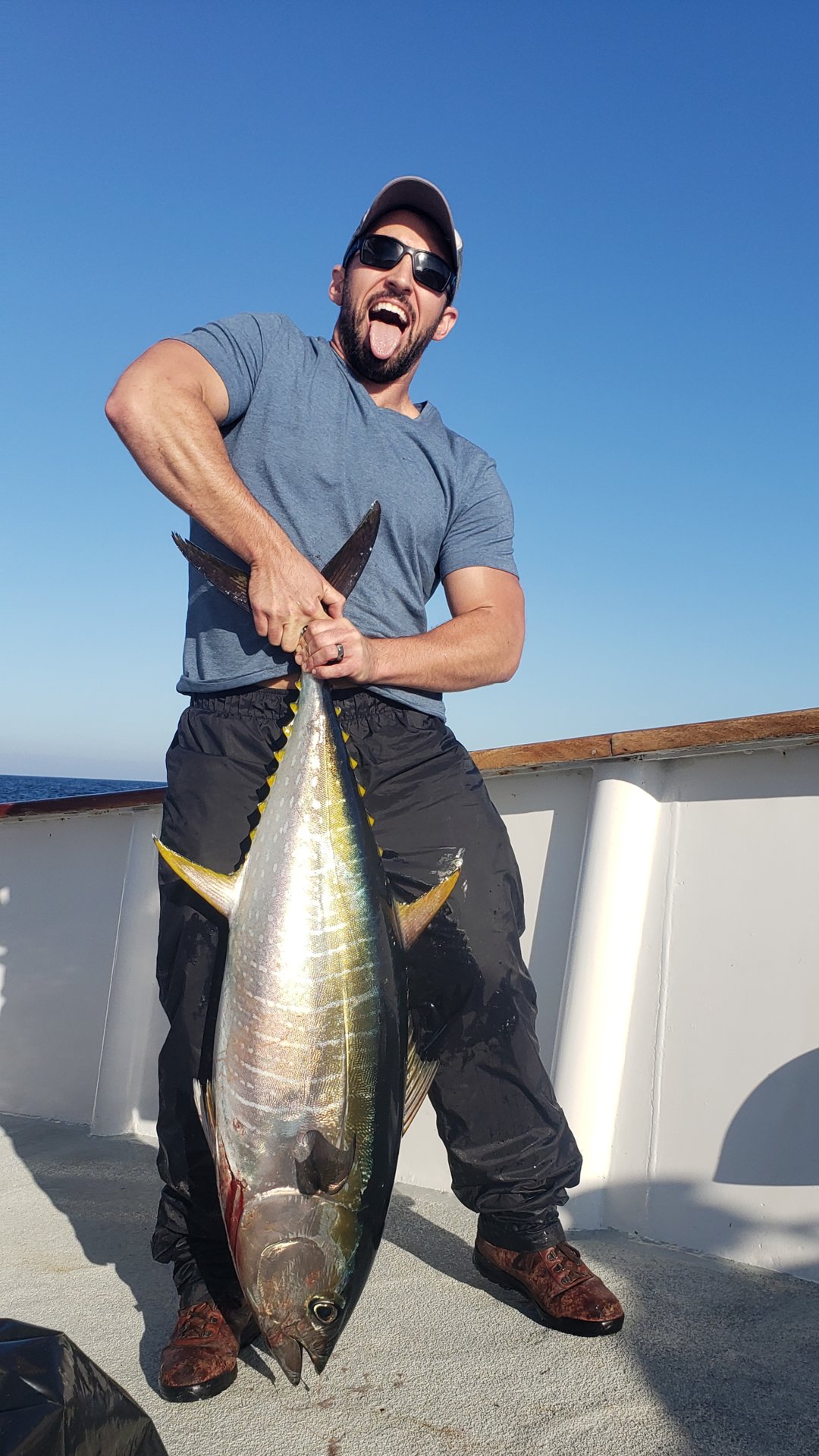 I breathed a sigh of relief as my mission to get both my guys on a fish has been accomplished !
They are so happy and I'm ecstatic because I know how much the odds were against them landing these fish on my "bass gear", and all my connections held. Whew ! 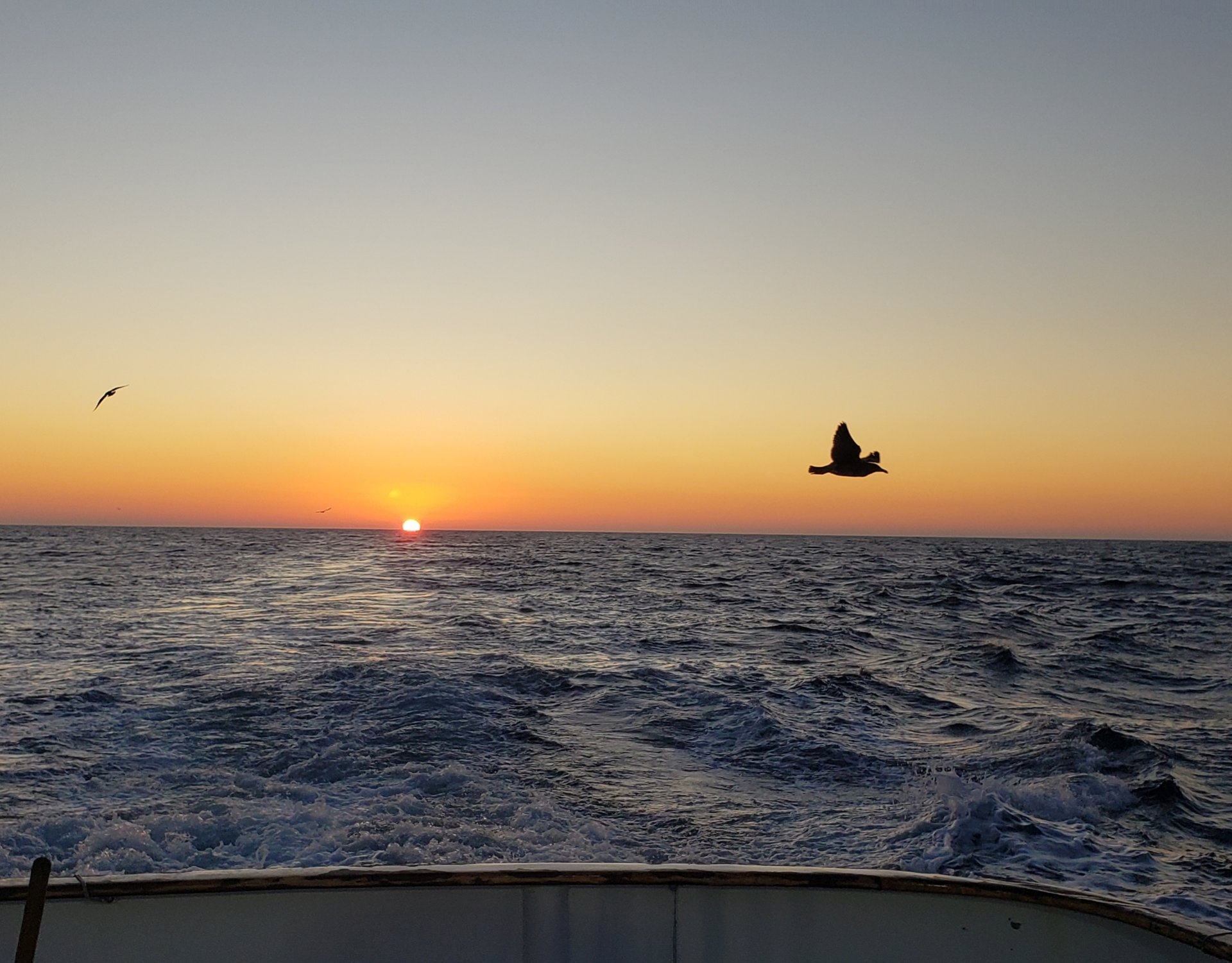 So as far as what worked . . . . Small circle hooks for this sized bait were a must ! I was using size 2 and 4 ringed circles which were similar in size to a size 1 mustad J hook.

I don't believe a single fish was landed with a J hook today and many were chewed off. I know you can fish a J like a circle and such but why take a chance. Several guys were on their fish for more than 30 min before getting chewed off. Several guys got bitten of 4-5 times with the small Js. I even got bitten of once with a circle hook on. (Luckily it was very soon after hooking up)
Bait selection was key with the small baits. To get them away from the boat. A few fish were hooked on 30lb but for some reason they didn't make it to the boat. Jimmy hooked 4 fish on 40lb (good bait and skill) but 3 bit off or broke the line before he could even hand them off. (The 4th got to gaff). Sweet spot for today was 25lb but the odds were against you. At the end of the day, they started to bite the heavier string.
The crew was fantastic and they really shined when it came to helping the guys who were on fish. No fish got tangled together or sawed off today. Even though we had a light load, guys worked together for the most part and we were able to fish in harmony.
If you can, get on one of the x.5 trips as the bite was starting to turn on again as were were leaving. I would expect the boats coming in tomorrow morning will have some decent counts.

Good luck out there guys !

PS. I keep saying "Big Fish" in my post. I know that these are small compared to the 100-300lb stuff out there. I'm just referencing to the gear that we are using.
Last edited: Nov 5, 2019
Reactions: GettinUglysSon, Fishingfiend87, Stayskunkedmyfrens and 46 others

You're a good guy Ray for making sure your buddies landed a fish. Hope to see you on the rail again soon.
Reactions: streetnfish
S

Awesome report, thanks for posting.
Greg and Lurch were awesome at the rail (with the rest of the crew as well) on my 3 day in early October.

Thanks for the report.
J

Thanks for a report worth reading! Good pics looks like fun.
Reactions: streetnfish and Bottom Line

One of the most well written reports I’ve seen (with sequential pix to boot). Just lived that trip vicariously through you, and I’m smiling. Rock on, Ray!...
Reactions: GettinUglysSon and streetnfish