I'm a little late on this one, but here it is.
We met Allan on his boat in Dana Point at about 4:45 AM. Rolled off the dock a little after 5 to sit in line behind 5-6 boats for bait. We loaded the two bait tanks with some awesome looking sardines, and headed off to the numbers Danny provided with Allan, Danny, Charlie, me, and Eli, a friend and work associate of Allan's.
The first set of numbers was a parking lot. Allan pulled quietly up on one edge, and we could see a few boats hanging fish. I perceived some dirty looks from some of the boats around us, but a guy in a center console with about 8 guys on it running full speed into the middle of the party stole the attention of us... a chorus of colorful language rang out as they pulled up to drift just about dead center.
Danny landed a couple of smaller fish there, 10-12 pounds, Eli got a nicer grade fish that he said was his biggest yellowfin to date. Then we carefully threaded our way out to look for something different.
Danny's next set of numbers was about the same. Watching from the outside it didn't appear there was much action, so we moved along for another spot. Along the way we came across a small group of boats drifting by a paddy. We set up on the edge of that and caught a few more of a better grade of fish there. Charlie hooked on that took him up to the bow, not the best location to land a fish... Charlie is still recovering from an arm surgery, and his larger fish on lighter line and a single speed reel was really working him. By the time he had it to deep color his arm had about had it, but he wanted to land it himself. Danny was in the bow with a gaff, a bit on the short side for the high bow of the boat. He had to lay on the deck to gaff the fish, and when he stuck it, it lit up and nearly pulled him over the side! Eli was there with a second gaff and stuck it again. They decided to get it up out of the water on the bow and struggled to get it up, then along the narrow rail area into the cockpit.
So of course while everyone was in the bow with Charlie, I hooked a fish in the stern and got it to color just about the time they stuck Charlie's fish. I'm trying to keep my tuna just at gaff distance, but trying to keep it out of the prop etc. at the same time. Allan took over helping get Charlie's fish up, and Eli came and gaffed mine, dragging another flopping fish into the boat just as they got back there with Charlie's! What a mess!! 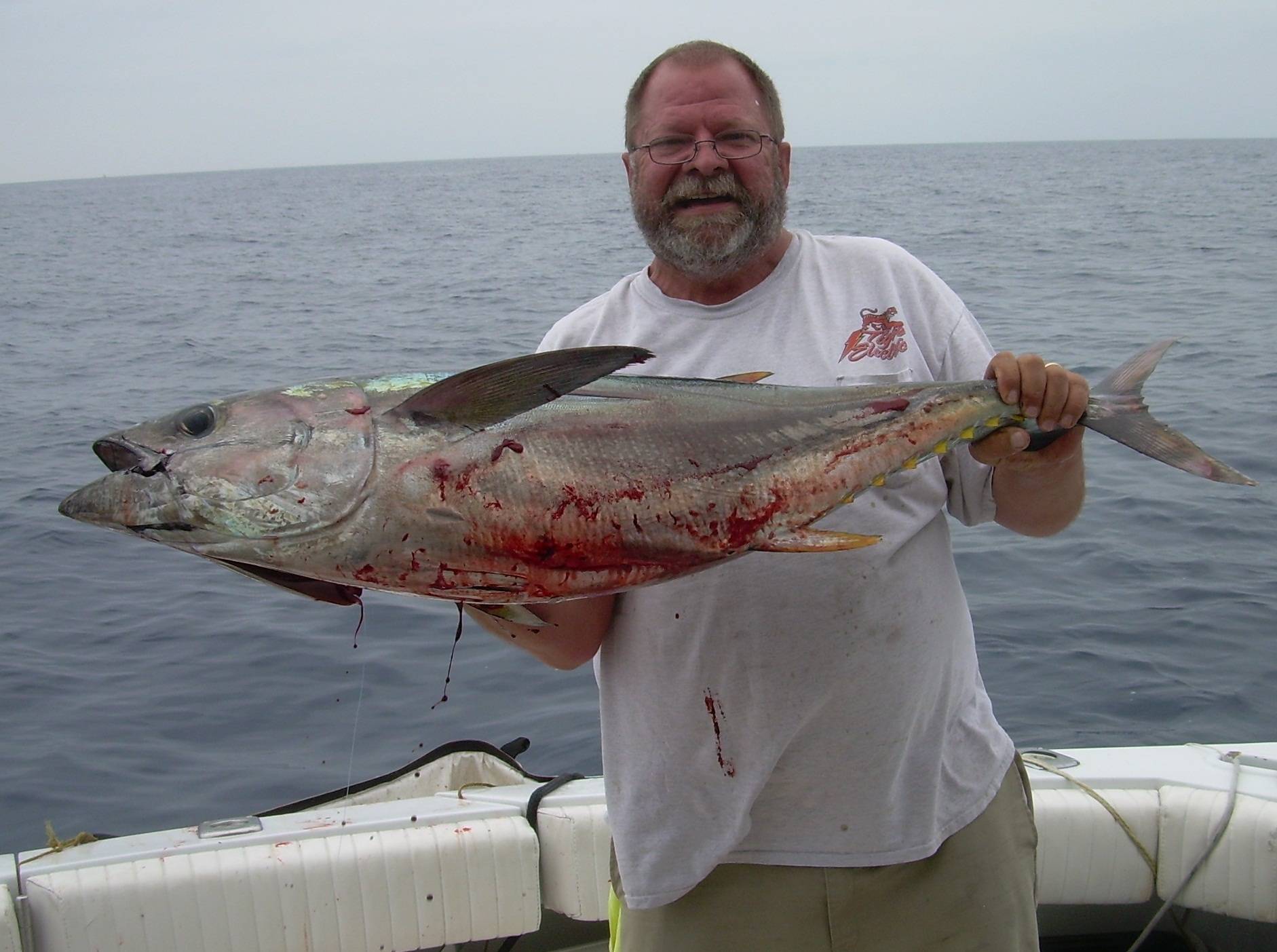 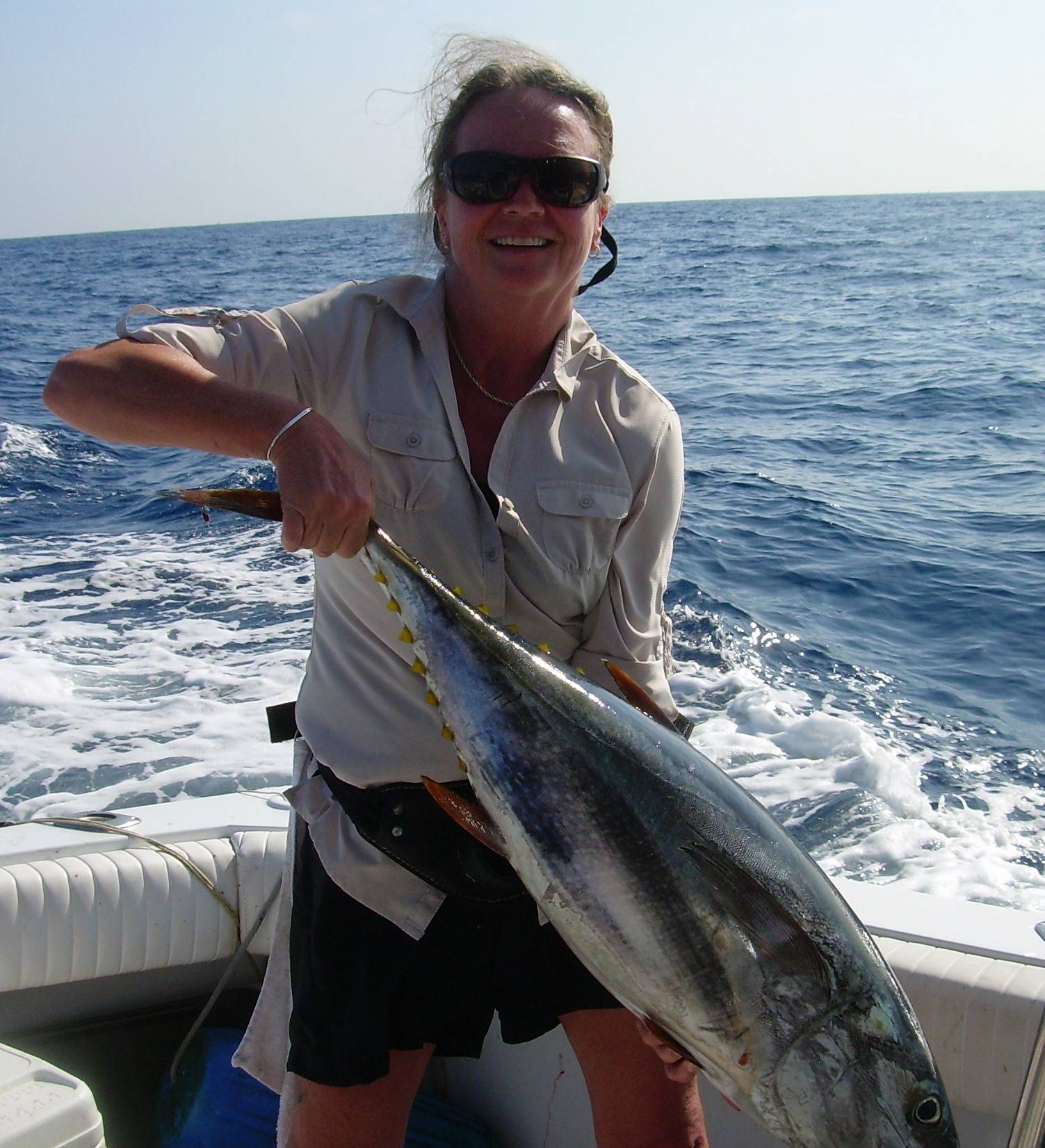 We had a total of eight yellowfin by now, and starting to realize someone is going to have to clean all of these, we decided it was time to call it quits! We cruised around a little looking for a paddy that might be holding some dorado, but trolled by a few paddies while filleting fish that seemed there was no one home. 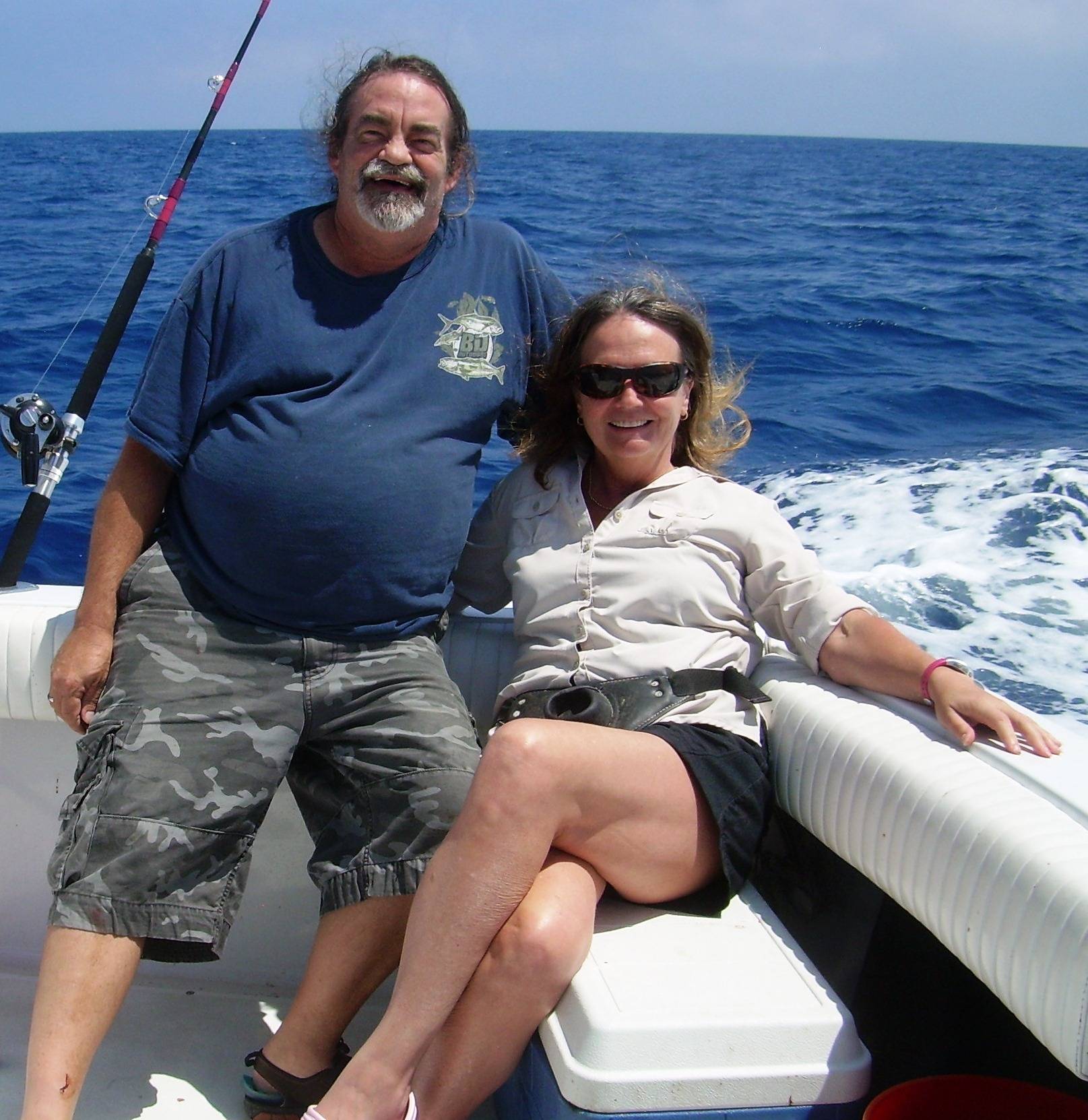 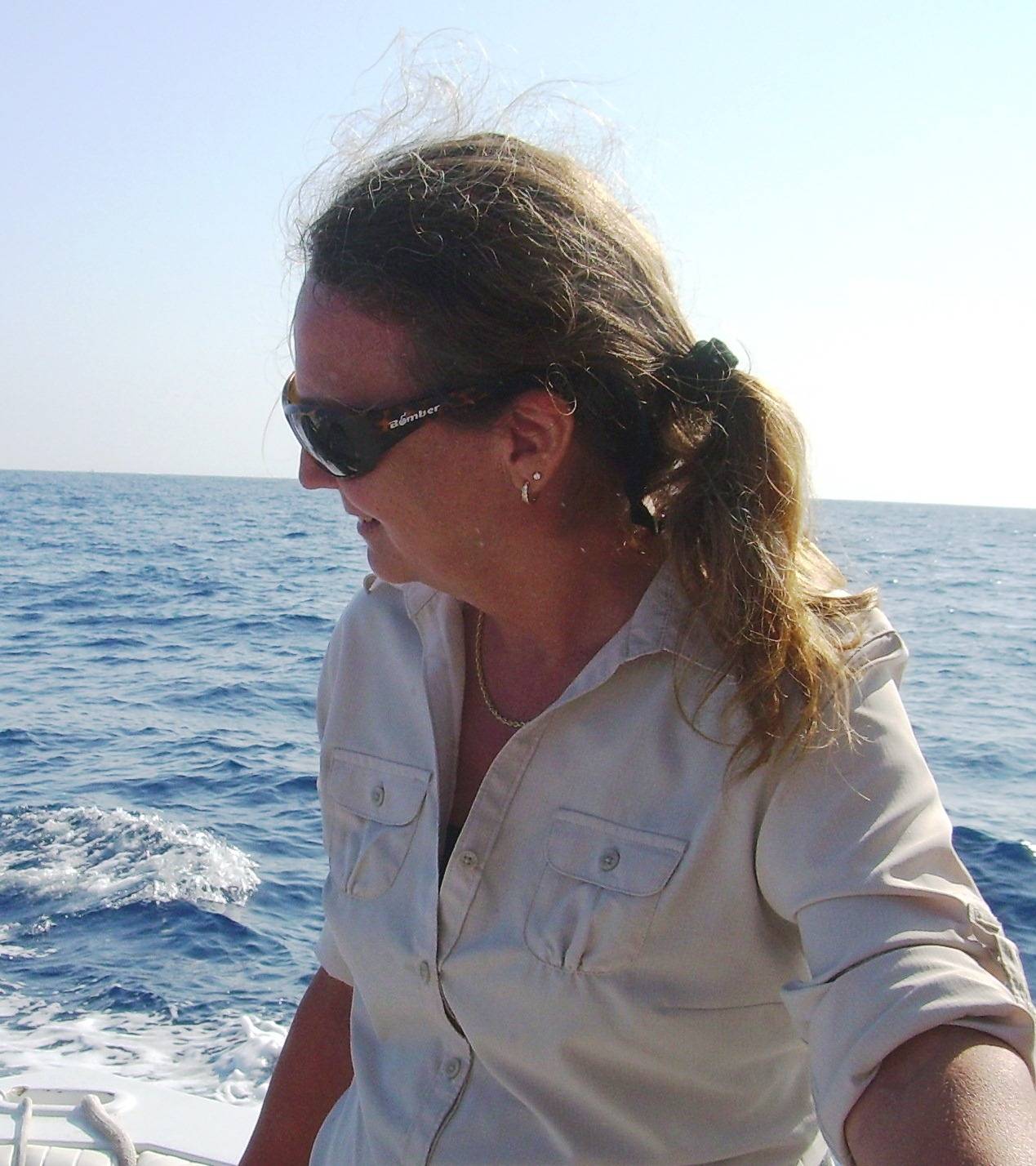 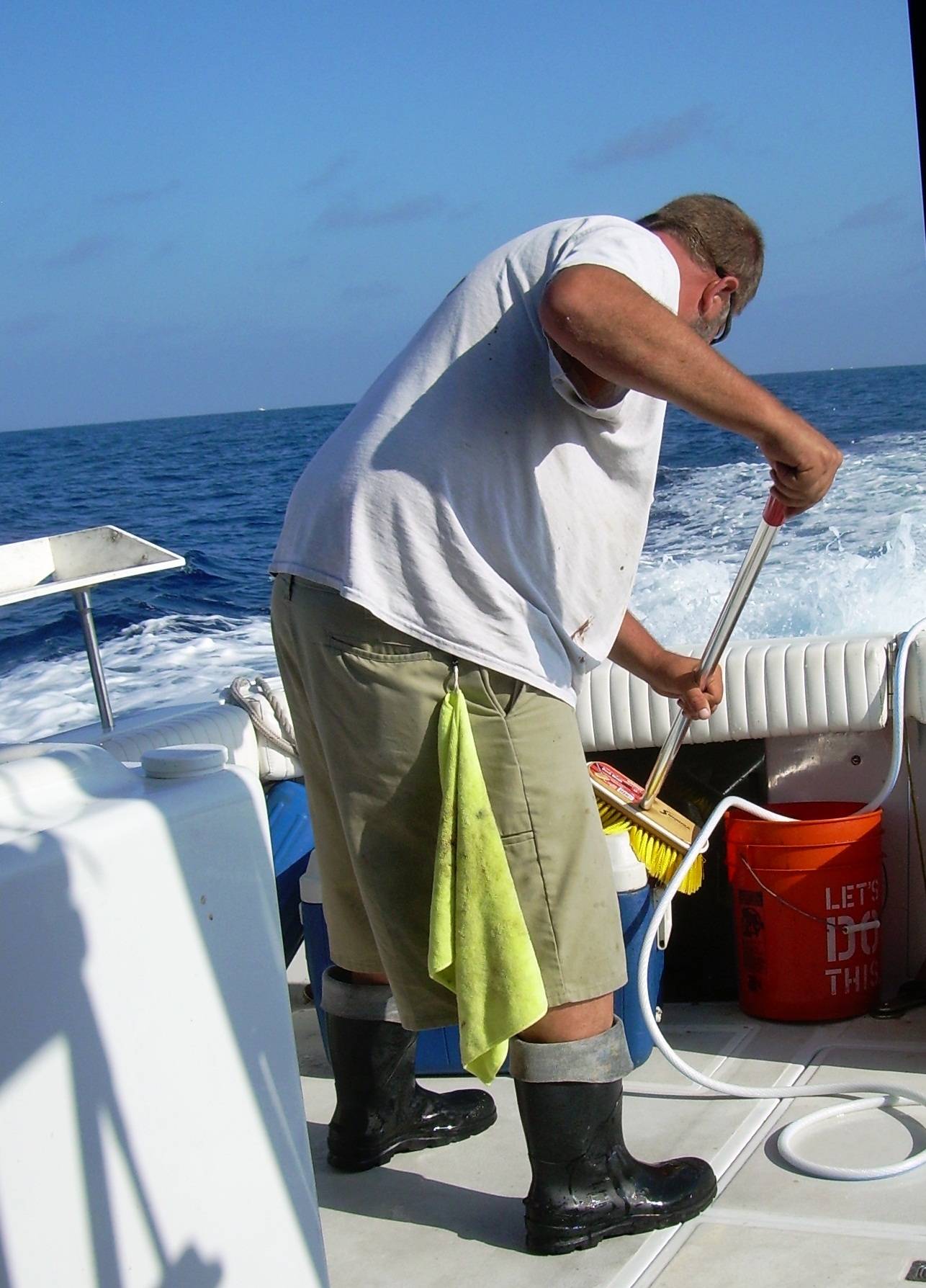 We got back to the dock at a decent hour, cleaned up the boat, and were on the road before dark!
Another wonderful day on the Comanche! Thanks Allan!!
Expand signature
Pacific Lures Pro-Staff
Soft Steel USA Pro-Staff
Reactions: Paddyman1, Erawk, surfgoose and 2 others

Nice work! I think we heard that and you out there yesterday. Congrats
Expand signature
Diehard's Creed: Work to fish. Fish hard or stay home. V/R - Meat
Reactions: The Sea Hag

Looking good, Pam! Tell Danny to take you to a nice Italian dinner, you look like you've lost weight. That tuna was darn near as big as you!
Reactions: The Sea Hag

surfgoose said:
Looking good, Pam! Tell Danny to take you to a nice Italian dinner, you look like you've lost weight. That tuna was darn near as big as you!
Click to expand...

Good idea... I know the perfect little place just down the street...!

Mmmmm. Tuna! Nice work and pics. Thanks for sharing.
Reactions: The Sea Hag

Its fun getting out on a smaller boat like this, you know the people and everything...

I've also learned to appreciate the galley cook and the deckhands a bit more though...! Cleaning fish and a boat after a long day is not fun ...!
Expand signature
Pacific Lures Pro-Staff
Soft Steel USA Pro-Staff

COOL glad you got more fish.