Full report for what has become an annual ritual for me and some other members here on the Clubfish 3.5 day trip on the Pacific Voyager:

Thursday: I arrived early and saw the regulars on this trip, many who I had seen earlier in the year on the other Clubfish trips. After quickly boarding, we left the dock at the scheduled 10am departure (on time!), we baited up with mostly small but very healthy well-rested dines. It was going to be a small hook trip. We headed west as Marko gave us one of his patent pending speeches and off we went. He said be ready as fish were close and we could be fishing within a couple hours. That didn’t really pan out, but just about as all hope was being lost were able to get a school handed off to us by the Mission Belle right at sunset and got a handful of small fish in windy conditions right as the sun set.
I ended up getting a quick two yellowfin and one skippy before it was pitch black and the bite was dead. This was my first time catching anything on this trip on the first day as normally it's just a travel day, so I considered it a huge win. It was also good for the group to work together and work out the kinks early as possible in the trip.

Friday: I woke up and it was already pretty windy, not horrible, but choppy and building to a consistent 13-15kts with white caps and a larger but well spaced swell. It was hard to spot much and I prepared for a day of a lot of driving around while we were watching the same movies over and over, like a typical slower PV trip. One thing to note, there is a new cook on board now. Chef Cruz was our cook this trip and he is not only culinarilly skilled but is also a super nice easy going guy, who also helps on deck which at times was a huge relief this trip when the small tuna went stupid (he got several well placed gaff shots for me). He looks pretty intimidating but fits in perfect with the rest of the crew, I hope he stays for the long haul.

I'm not sure where we fished but we could just make out Pyramid Head off in the distance north of our position as we headed West into the weather. At around 8am we turned and slowed on a meter mark, we tossed some bait and shouts of "boil" woke the stragglers. Lines in, and the first couple bites made it clear these were bigger 80-110lb bluefin. The fish were hooked flyline dines and some on colt sniper jigs fished deep. The bluefin wrecked some people with, some pinned to the rail for 2.5 hours before eventually straightening hooks, others were chewed off immediately. I didn't hook one. We landed 5-7 of them. As we continued to drift that out it quickly switched to 25-30lb yellowfin. We continued to plunk alon, almost pulling the plug a few times before calls of "fresh one" or "boil" would make us continue until sunset. It was pretty easy fishing at times if you could pick a decent bait, shoulder hook with a small hook and get it away from the boat. Other times it was hard to get a bite at all. Mark wanted people to fish 20-30lb. Myself and others stuck with 40-50 hoping for that big bluefin bite and it didn’t hamper my bites, but fishing the smaller baits was clearly a challenge for many of the people on board. When all was settled we were top boat in the fleet for the day I believe with over a 100 yellowfin. I had tagged 12 and hook and handed a few more when it was really hot a heavy. We drifted approximately 10 miles throughout the day. Mark told us most fleet had struggled to find any biters and despite Mark calling a lot of boats into our area to hopefully cash in on what we found, none of them were able to make much anything happen. We had found the needle in the haystack... 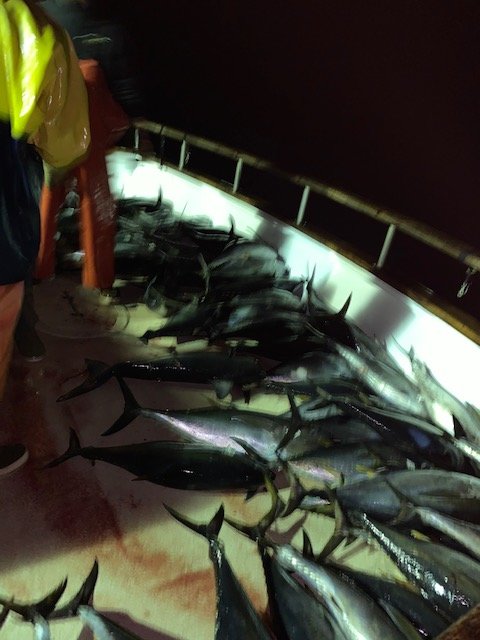 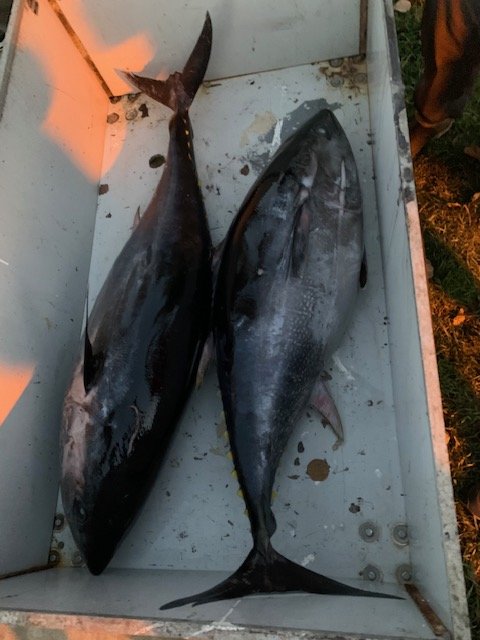 Saturday: Through the night we worked our way back up towards where we has started the previous day, looking to re-locate that bluefin. The weather was much nicer as forcasted and improved through the day, the wind never eclipsed 10kts at any point and I don't recall one whitcap. At around 7am Mark found another good meter mark and it went stupid wide open on more 25-30lb yellowfin. It was fun, but not exactly what we were looking for. Mark handed that school off to the Tribute and we watched them bend the whole boat for a second as we left. We continued further west looking for more bluefin. Around noon we found a puddler with a mix of smaller bluefin, 30lb yellowfin and a couple skippies. There were 80lb fish, probably bluefin, boiling in our chum but wouldn't eat even the most expertly presented baits. A few more fish there until it fizzled out. We continued looking for more bluefin for the rest of the day but never found anything that bit or ever responded to the boat. Super shy normal bluefin. Mark asked us if we had our fill of tuna and wanted to switch it up looking for yellows with a backup of cod at the Cortez bank and all agreed that sounded like a good plan. 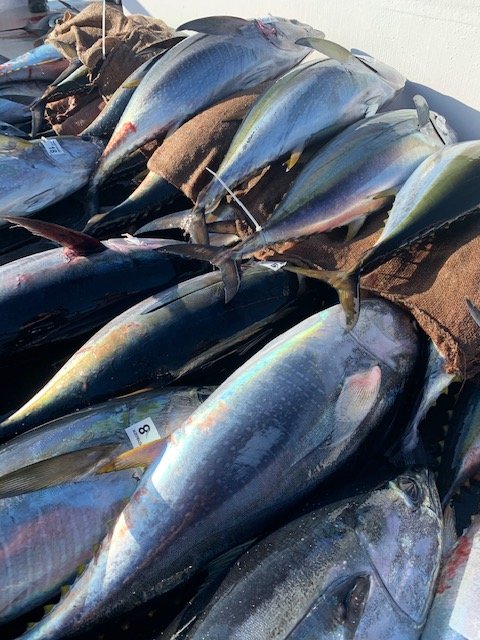 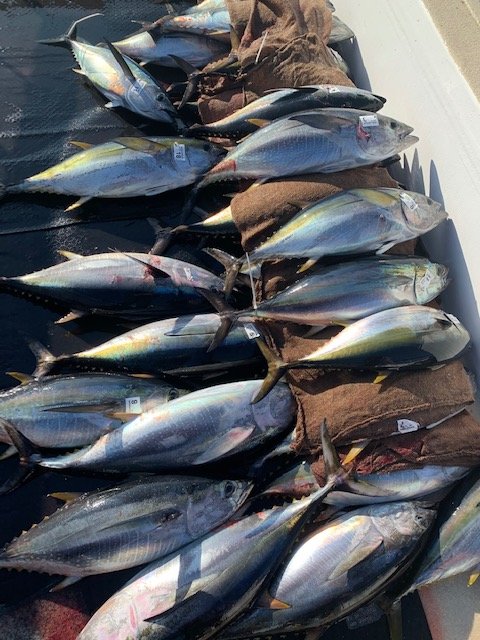 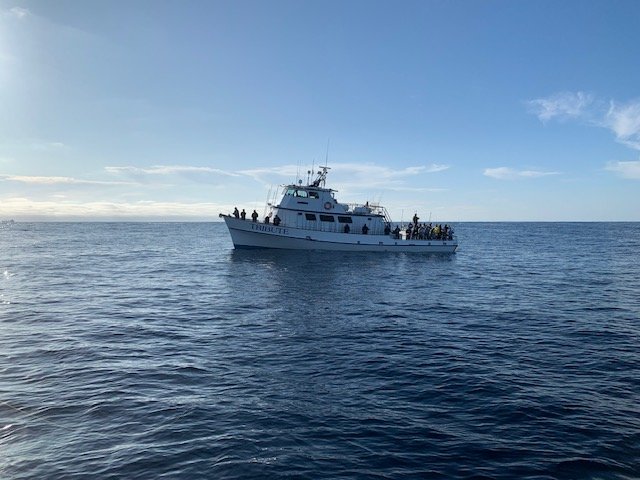 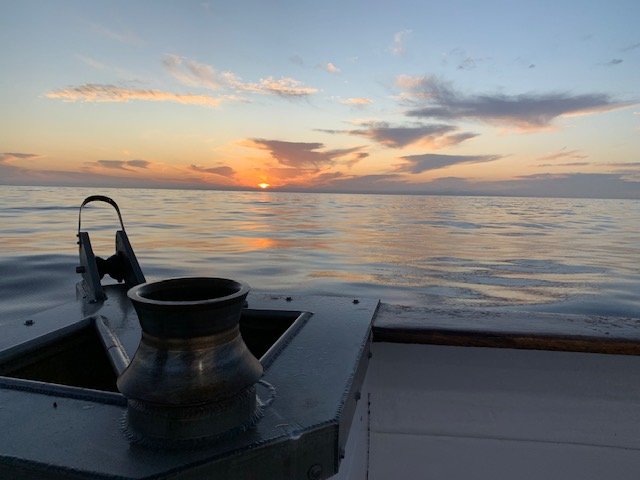 Sunday: We woke up anchored up on the Cortez in beautiful calm conditions, little to no wind with a large spaced out west swell. Our plan was to start our looking for yellows, and got after that quickly after sunrise. A quick look at the normal spots revealed the current was non-existent so we caught a few mixed whitefish, sheephead and larger Bonita and continued searching the bank looking for better conditions. As we drive around the bank, in the distance you could occasionally see large waves breaking at the shallow spot at the Buoys. I had seen the bank break before, but this time it was much larger and much cleaner than the wind driven slop I had seen the November trip I did on a small private boat the year prior. After giving up on yellows due to a lack of conditions, we eventually changed our attention to cod fishing, a group favorite. Few people fish cod like Mark and as expected we messed up a limit of huge reds. We hung on the bank until sunset and then started a slow put heading back in beautiful weather, another epic trip in the books. Huge thanks to Steve of Clubfish for putting these trips together. Great group of guys and ladies and always a good time to fish with them. Also great thanks to Mark, Dom, Kody, Mitch and Cruz on the Pacific Voyager for another epic trip. 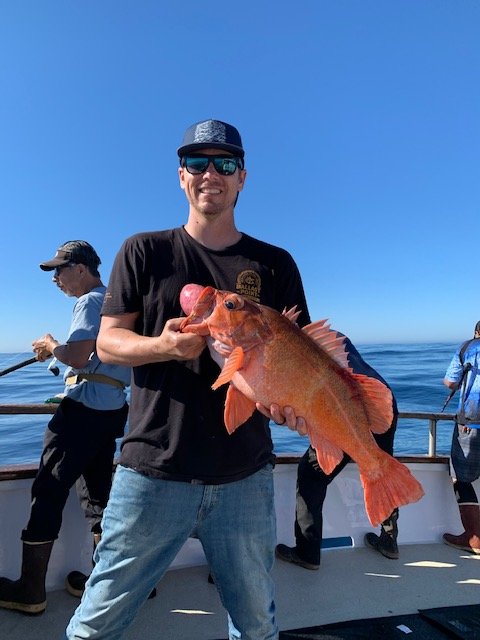 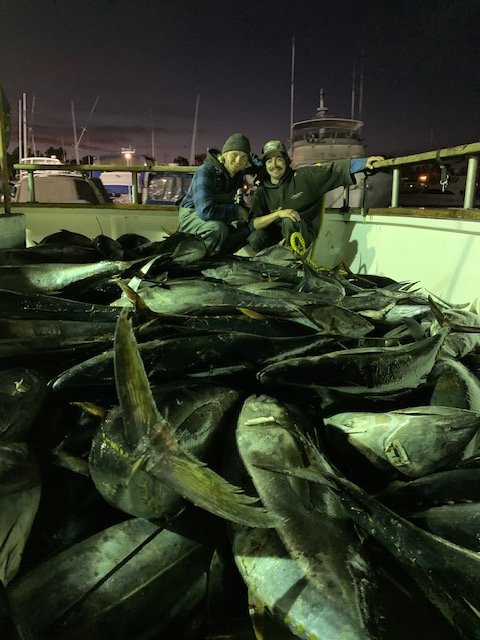 Not quite as good as your recent reports, but it still fills the freezer!
Upvote 0

If I would have posted about all the skunk trips this summer, it would have been embarrassing. Few good days made up for all the crappy ones.
Reactions: SouthBayKiller
Upvote 0