Boat
Son of a Beach

First off, I just wanted to say thanks to all the teams that participated in the 2019 BD Outdoors Yellowtail Shootout. We had an excellent turnout and there were some big yellows caught this year with the biggest one of the tourney coming in at 37.1lbs. But the moment that captured everyone's attention came when the BoatUS $2500 Largest Bluefin Tuna Jackpot was announced.
- 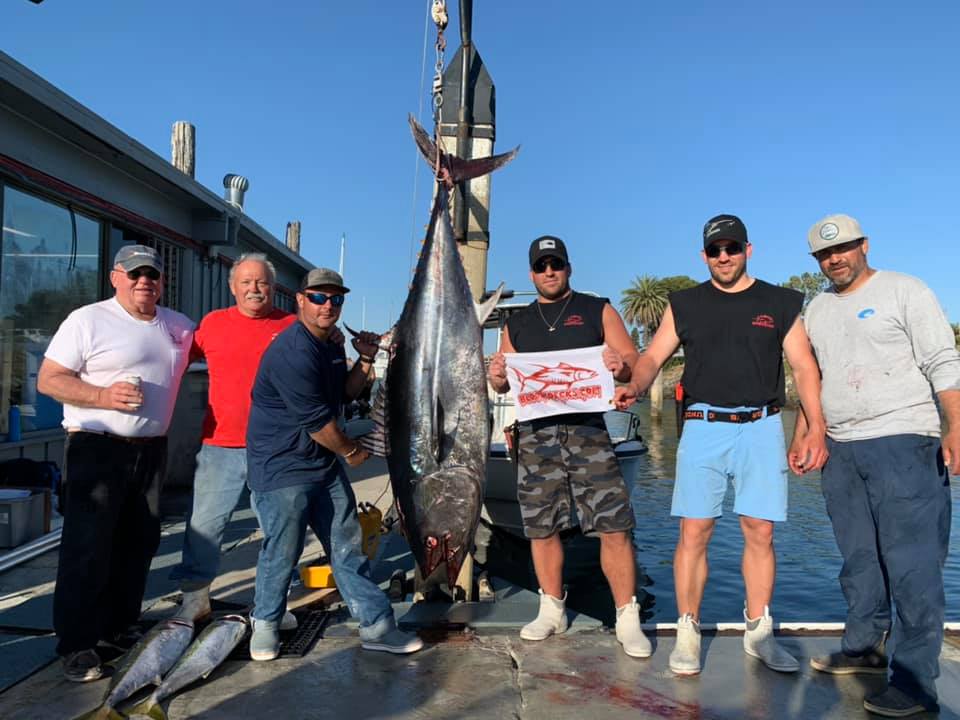 Team Reel E-ZE, who's pictured above with their 275-pound beast of a tuna, was a shoo-in to win the $2500 jackpot. Unfortunately, these guys were stopped by the Coast Guard for inspection and the delay took up enough time that it prevented them from getting to the dock in time to weigh the fish. They were 16 minutes late after regulation time for the tournament.
- 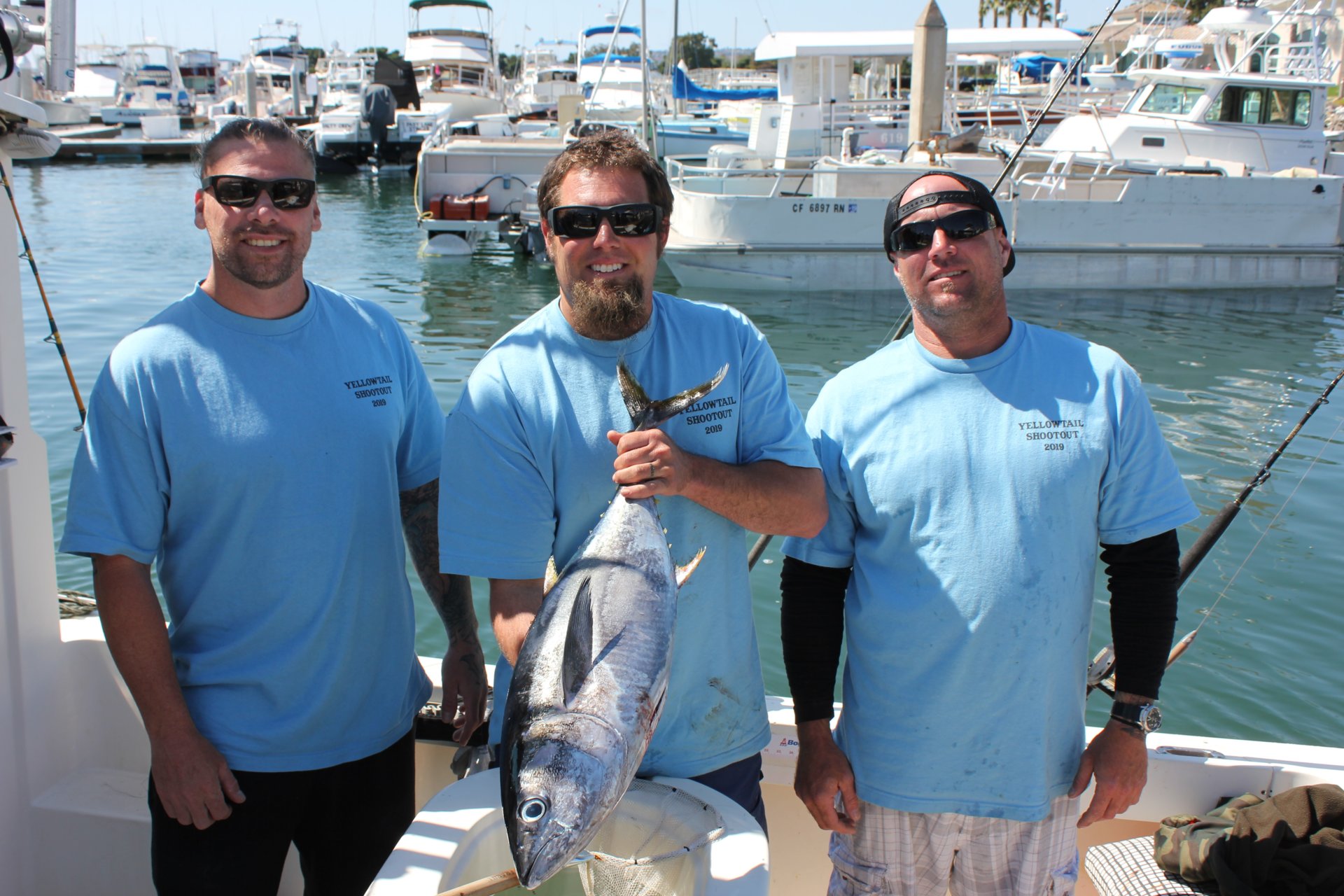 Now the team that won it, Los Bastardos, won the jackpot with an incredible and whopping 15.4lb YFT!!! It also should be noted that a team or two caught bigger tuna than this but also did not enter into $2500 jackpot which was a $50 buy-in. Los Bastardos was given the $2500 check but what they did after receiving it was pure class. Drew Palmer from Los Bastardos, walks over to team Reel E-ZE and gives the check to them. It was a great sign of respect and a touch of class! The 350+ people in attendance of the banquet stood up to applaud the act. that's what fishing is all about right there it was so cool to see and witness a moment like that. Chivalry isn't dead folks. Below is the moment captured on video! #BDOutdoors
-

Free call in on any paddy for life to those guys!
Toggle signature
Lurkmeister
Reactions: 2454 big mike, palmerpz, Ctony.clark and 3 others
Upvote 0

How did they cash it with the other team name on it?
Reactions: lowyder993s, Reelpirate and bullyo
Upvote 0

Hats off to them
Upvote 0

Cool that they did that but not so sure it would have happened if the host didn't guilt trip them and then mock their fish.
Reactions: Allen Rice, moz2121 and pacificscout
Upvote 0

Those guys rule hard choice but a good one .
Reactions: c-goat
Upvote 0

Hismosa said:
Cool that they did that but not so sure it would have happened if the host didn't guilt trip them and then mock their fish.
Click to expand...

We were seated right next to their table.When MC said the coast guard caused them to be late for weigh in they said who ever wins should give up their check.This was a moment before they realised they had one.
Either way this was way cool man.
Toggle signature
I fish for sustenance,I suffer from sustenance abuse.
Reactions: R&R and repo805
Upvote 0

This a Yellowtail Contest.
BFT should be a bycatch, not a Kite/yummy target.
There is a Tuna Shootout event for this.
Same guys beat us last year targeting BFT all day with a kite and yummy, while we fished Yellowtail and came across BFT.
Just my opinion.
Reactions: apogee, Drew Stephens, Allen Rice and 5 others
Upvote 0

Boat
Son of a Beach

yakdout said:
How did they cash it with the other team name on it?
Click to expand...

The big check is just for pics hahah. We send the winning team an actual check.
Upvote 0
M

I question if the CG held them up. I find it hard to believe if your respectful and have the conversation with the CG that your in a tournament and in danger of not making the weigh in time if delayed, that they wouldn’t expedite the inspection and get them on their way ASAP. Doesn’t make sense.
Upvote 0

Dang, that was very nice. Hats off to Drew and team.
Upvote 0
D

We were hung up by them a few years ago coming in for a weigh-in for a club tourney and they would not let us go until the inspection was complete. They will not shortcut their inspection for 1 minute. Very frustrating to say the least!
Upvote 0

Coast guard is all business, all the time, as they should be. They have a tough job.....
Reactions: Almud, RodRage and palmerpz
Upvote 0

Wow. So much class. They must be from the whales vagina.
Nice move fellas.
Toggle signature
Matt
Mucho Take it Easy
Reactions: palmerpz
Upvote 0

Boat
Royal Polaris, Ocean Odyssey, Yours with an invite

So if they headed in 17 minutes earlier then they did, they would of made it before the cut off time, coast guard inspection or no coast guard inspection. After catching the big bluefin did they head in right away or did they continue to fish for as long as they could, thereby cutting the weighin deadline too close to begin with? Although it was one teams "choice" to give the check to the late arriving team with the bigger bluefin, it really wasn't, not after the announcer mocked and sort of belittled the team who won with a much smaller yellowfin. The team would of been heckled and disparaged if they kept the check. I would have given the check to the other team but, it got me thinking, rules are rules for a reason and there are no exceptions for excuses.
I experienced a coast guard inspection and search. I was on my friends 26 ft seacraft with twin mercury 250's on the back. We were doing 50 knots easy headed to dana point from San Diego on a semi calm day with a little chop. With the big mercury 2 strokes howling off the back, his radio, the wind, the chattering of poles, the occasional slap of a wave and us with a death grip on grab bars on the center console I looked back and saw lights flashing way behind us, I thought nothing of it because there were other boats closer to them. 15 minutes later they're farther back and the only boat back there, still with flashing lights. I tell my friend, he slows it way down, its the coast guard and they think we are running from them for some reason. They had been chasing us for a long time, we didn't even know it and we were pulling away. They thought we were drug runners, they searched and gave a thorough safety inspection. It took about 20 mins at the most and they even put a inspection sticker on his windscreen. Shouldn't someone who has a winning fish and in a tournament make sure they head in extra early. If he arrived late because he blew an engine and had to limp back would he still be the winner in the announcers mind. What if he missed the cutoff time because he answered a distress call from a sinking vessel? There's a million reasonable excuses why someone misses a cutoff time, but the rules should be followed without chastising a team if they decide to keep the prize money. They shouldn't feel forced into it. And if you have a winning fish head in early.
Upvote 0
K

Craftyone is a douche!
Good on Bastardos!
Reactions: MDC and D Wyman
Upvote 0

Outstanding, now those winners should kick a little back to the second place winner..that is what I would do.
Reactions: apogee, Big Kahuna, 2454 big mike and 2 others
Upvote 0

Thank you for the awesome comments guys... well most of ya anyways .... first let me say that the MC did not “ guilt” me into anything...Guilt is a useless learned emotion that comes from how a person was raised.. we “ Los Bastardos “ All agreed that they should get the $. Most people let the dollar throw their morale compass way off... Sonny , Erik and myself do not ... ESPECIALLY When fishing is involved... I grew up fishing the waters off Southern California and Mexico and the love of the Ocean and all it provides us is something I hold very sacred ... I take my two sons Sawyer and Colt fishing with me every time I fish except in the Ytso.. and I use those times in the water to try and instill what I believe is important in this life .... Honesty, loyalty and integrity... just to name a few. The bottom line is those guys caught a 274 lb bluefin and was held up by the US COAST GUARD. I have never caught a tuna over 100lbs let alone over 200 lb on a tournament day... They deserved the money ... I mean after all guys it was a tournament and supposed to be fun ... I feel very fortunate to have had such a platform as the awards banquet to do something that seemed so difficult to most but in reality was simply the right thing to do ...
Toggle signature
Bastardo
Reactions: Roofiem, Almud, Husband and 12 others
Upvote 0

In all honesty if Reel eezzee would show me how to fish with a kite and maybe how to work my simrad I would say we were squared up and even .... technology passed me by when Nintendo super Mario bros came out.
Toggle signature
Bastardo
Reactions: PaDDy Killer', JakeFromStateFarm and Johnlgarrison
Upvote 0

2019 INDEPENDENCE 10 DAY SHOOTOUT – ALL ABOUT TIMING, AVAILABILITY, AND FISHING WITH FRIENDS