I had booked for the 2nd on the Mirage but the weather looked terrible and I was sure the trip would be canceled. So I decided to book another “just in case” trip on the 1st on the Pacific Dawn. Prior to booking I called Channel Islands sport fishing to see if the Mirage would be going out on the 1st, the girl on the phone said only 2 people booked, it most likely wasn’t going out.

About 2 hours later I get a call asking if I wanted to change my booking to the 1st as the 2nd wasn’t looking good. I said I would of if you would of told me that 2 hours earlier….

So off on the Pacific Dawn we go. At about 1:30 AM we stop to make squid. A small ball of squid gave us a few but not the numbers needed so we moved. I dosed back off to wake back up at 4 with the boat dropping anchor. And a huge column of squid from sea floor to the surface. After about 30 mins we had more than enough fir the day.

We motor over to the island and set anchor and drop. Looks like most the boats from Ventura/ Oxnard are there. Even a tiny 19’ skiff had braved the channel.

We saw a few WSB caught, a bunch of cudas were all over and a few bay rays. We gave this the good college try and did drifts, and spit stops for 6 or so hours only to pick up on one WSB. I was very happy to see the guy who caught it was the guy who had very little experience, rental gear and a great attitude, he’s hooked!

So we make a move to put some rockfish on the boat so there at least some numbers. Rock fishing was great we all caught quality reds, some lings, and unfortunately too many chucks. ( they all went back)

So not a bad day but not what I was targeting, so it was time to run over to my friends house shower and hall ass to Channel Islands for trip 2
Reactions: Kai, C-4 Fishing, Cbaldwin and 6 others
Upvote 3 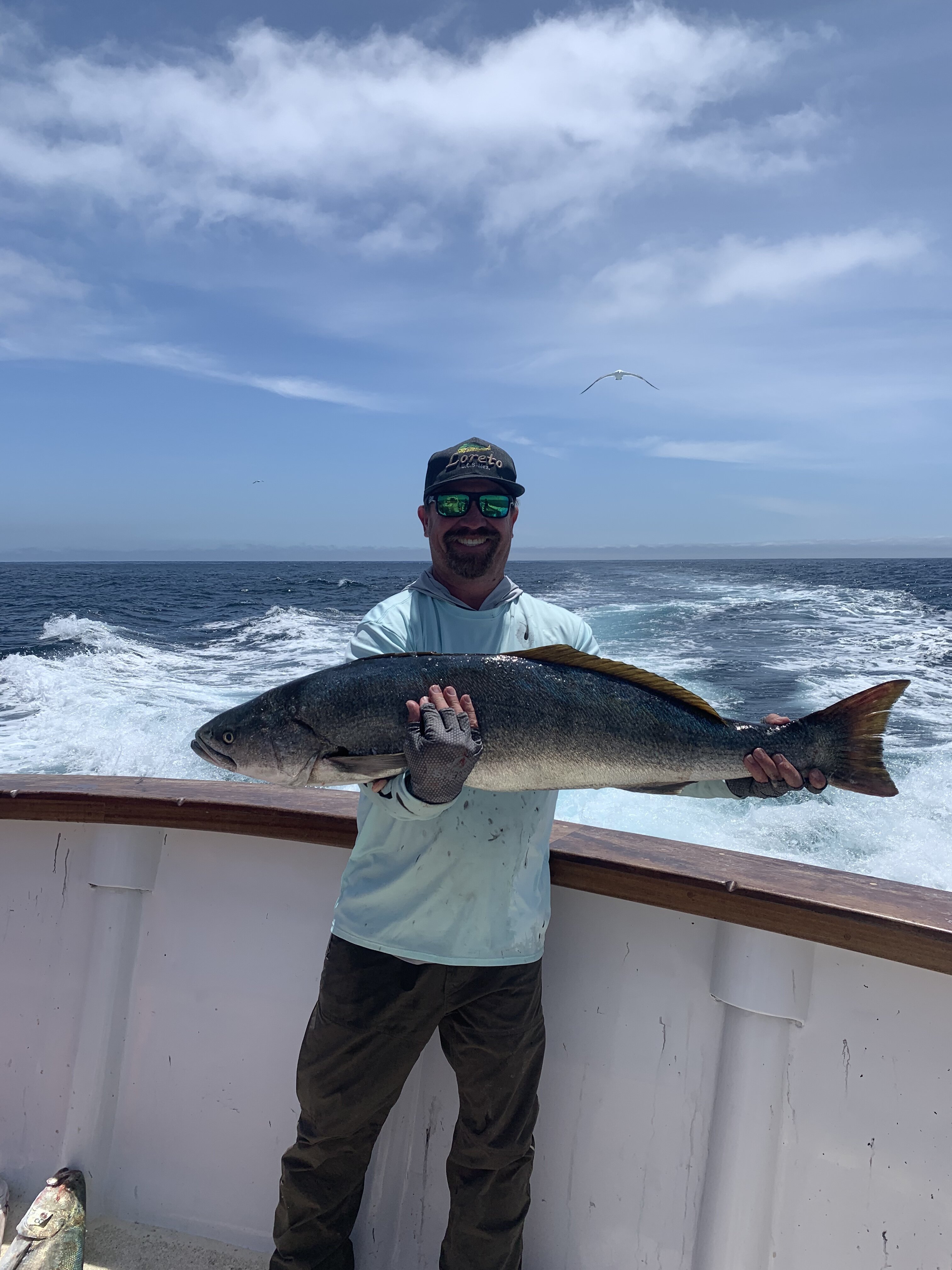 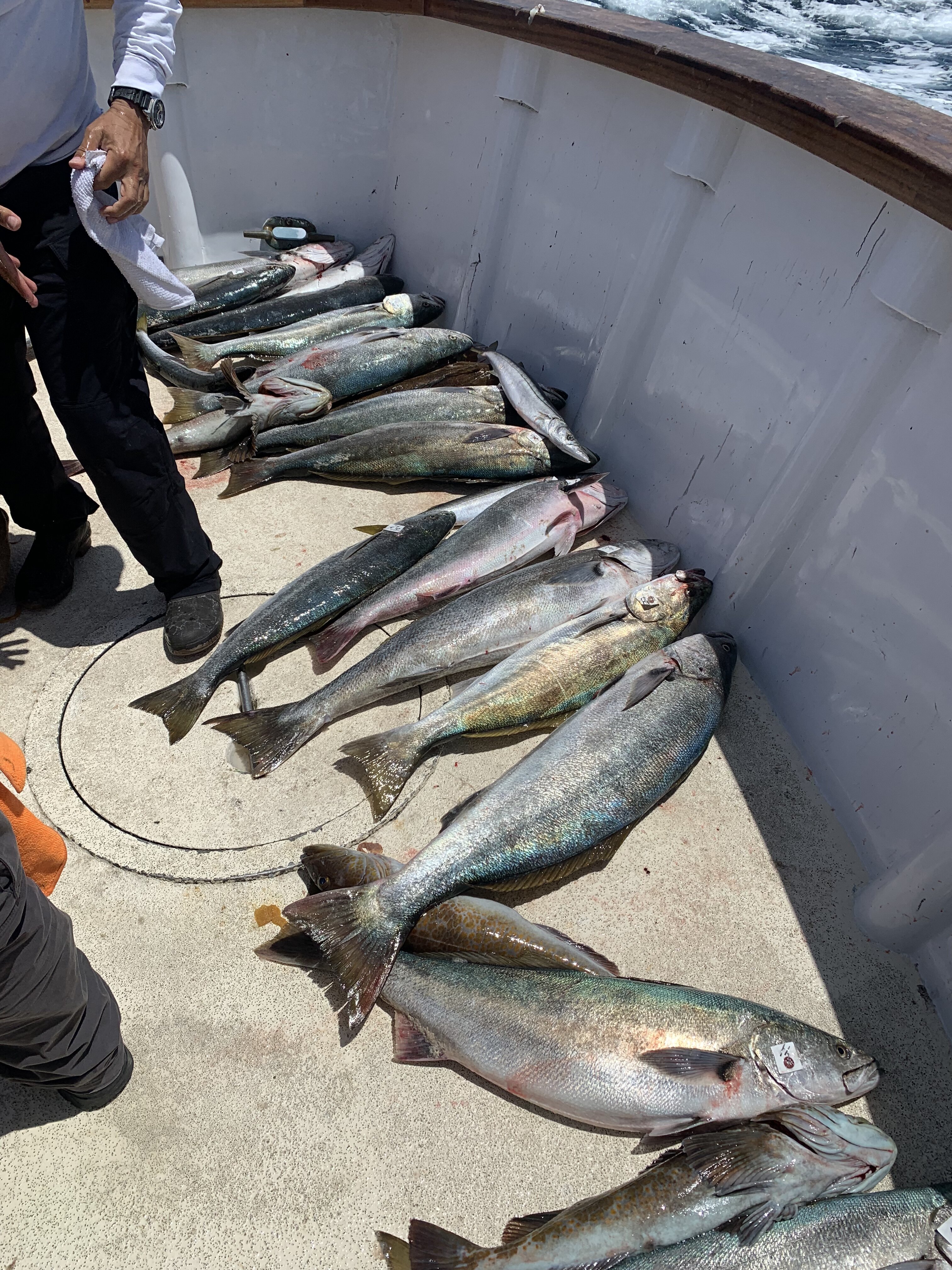 Day 2
We get to the dock and it’s a light load but the boat is going, hell yea! We leave early and start to motor back to the same spot. The Mirage already has 2 tanks full of live squid so no making bait and I try and get some sleep. I wake to hear the motor drop in RPMs and wait a few to see if they are motoring around to find fish.

Well my bladder gets the best of me so up I go to see 3 guy already in the water! I do my duties and quickly grab a fresh squid and drop.

5-10 mins later the first WSB is on board with another guy hooked up. Maybe another 5 mins and I’m on. This guy is pulling hard, it’s a good fish! With my heart pumping and action heating up the deck is quickly filling up.

I land my big boy and make room for the freshly woke up anglers and head to the bow. The crew says to drop again as they want boat limits.

Quickly people start hooking up and some nice fish are being caught. It’s a great group of experienced fishermen that know how to follow their lives and a fantastic crew who were very attentive.

By 9:30 we gave out WSB limits. So again off to rock fish. The Cap wants to try and stay clear of the areas known for chuckle heads so we do several drifts over some gravel areas, with only a few fish taken.

So we move, more of the same, it’s starting to look like rocking fishing might be tough for the first time in 47 years. The next few drifts nothing, so the Cap says we are making about an hour move, fine by me.

Next stop over a small pile of rocks we start nailing good reds and a few ling cods. So we do this drift a few times.

I’m talking to the captain and he said the first place had fish marked all over the fish finder but no bits, the second place showed no fish but they were there.

One guy caught a massive ling on slow pitch which was really impressive. Lots of nice reds, some monster chuckle heads ( all released) and I nailed a massive cow cod that was babied and released with a descending device.


Over all a fantastic couple of days on the water, now the long drive back to Bishop.
Last edited: Jun 5, 2022
Reactions: Salty Skipjack, michael c day, Fishingfiend87 and 17 others
Upvote 1

Give um hell!!!
Good luck and look forward to the next chapter.
Oh shit!!
I wrote too soon...

Ventura has been my go to since every boat seems to be fishing bluefin now and a 1.5day is a thousand bucks all in,we have 2 trips coming up right after the limits change,great job!
Toggle signature
FJB
Reactions: 7emptsT
Upvote 0

Great to put a face to the name, great to meet you too!
Upvote 0

Successive days yeah! How to do it. Good fishin'!
Toggle signature
Sometimes you feel like you are absolutely fucked. But then you look at the situation again and it turns out you are only like 40% fucked. --Mingma Gbyabu Sherpa 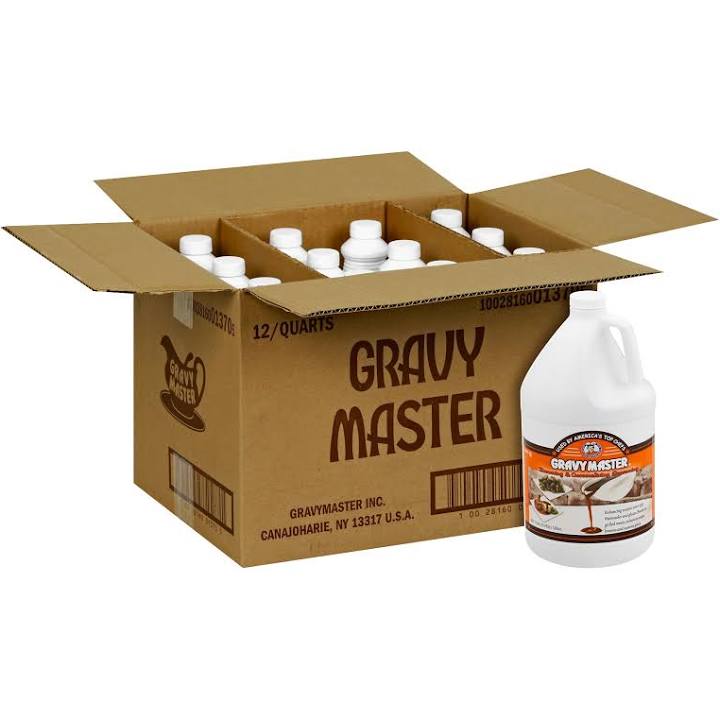 Omarkayak said:
Successive days yeah! How to do it. Good fishin'!
Click to expand...

Could have gone again, I was pumped. I fish almost every day, but mostly trout and bass. When I get the opportunity to hit the ocean I try and make the best of it.
Reactions: Salty Skipjack, onehottip, Tom123 and 1 other person
Upvote 0
Show hidden low quality content