this is a pretty easy do it yourself job....but it IS time consuming and you'll need some tools, some grease, lots of beer and glacoma medication to make it thru.

the springs and front hubs really looked like shit and needed replacement. do yourself a favor and DONT try and recycle parts....i've learned my lesson the hard way from previous experience. for a two axle trailer, 4 jack stands and a 20 ton canister jack were required to remove the wheels and take the weight off the shitty old springs:

once i got the trailer up on jacks, the real fun began. remove the bearing buddy by tapping it horizontally with a hammer or a mallet. once the bearing buddy is off, remove the cotter pin and then remove the castle nut. the hub should slide off without a fight. with the serious corrosion, it was "easier" for me to cut the fasteners off with a grinder equipped with a metal cutting wheel. i cut the forward bolts and axel bolts off with the grinder and then cut the balancer in half so i had enuff room to use the sawzall to cutt the balancer bolts off. it is convenient to have a jack stand for the axel, or you can tie it to the frame. here's what it looks like with the hub off

once i got all the gear off, i scaled the trailer to remove as much rust as possible and then painted that shit with zincpoxy rust resistant primer.

i then installed the load balancer, then the forward spring and finally the rear spring. next was the new front hub and i sprayed some rust resistant man juice on them to see if i can control the rust for a day or two

PS: Aros Trailers does NOT give BD discounts anymore

Nice job Vince, thanks for the tips. I came close to pulling the hubs to check the brakes today. Maybe tomorrow.

Just did the same shit, but I whimped out and had Smokey do it

Very nice job. Thanks for the tutorial.
Expand signature
-Adam on the "Bella Donna".

Trailer work SUCKS.
Expand signature
My 26 Proline is for sale! Check it out under Member boats for sale

Cool Vince, nice job. Had Freeway Trailer in Escondido do the same to mine, I also had to install a new coupler, my old one was causing to mahy problems.

Good job man. Nice tutorial and pictures.
Expand signature
YOU CAN TELL A DUTCHMAN,
BUT YOU CAN'T TELL HIM MUCH

If you buy a shit load of baring grease and coat the shit out of springs, hub and all the parts with a paint brush it will repel the salt water. I just did the same job on my fathers boat and it worked bitchen.

thanks for the props doods! yeah, doing these little projects was time consuming, but well worth it.

vilionetti- i ran out of bearing grease on the LAST hub, but i plan on putting a healthy amount on the springs and anything else that can rust.

i am also experimenting with salt away to see if it will protect against rust. rust test in progress!

Just a thought: you might wanna pad the jack stands so you don't scratch any of the galvy coating on your trailer.
Expand signature
In loving memory of Joey Flores, Point Loma local.

GO to dixie line and buy a can of Rust destroyer . Spray over rust or spray the new springs . Will never rust except were they pivot Awsume stuff $14.00 a can 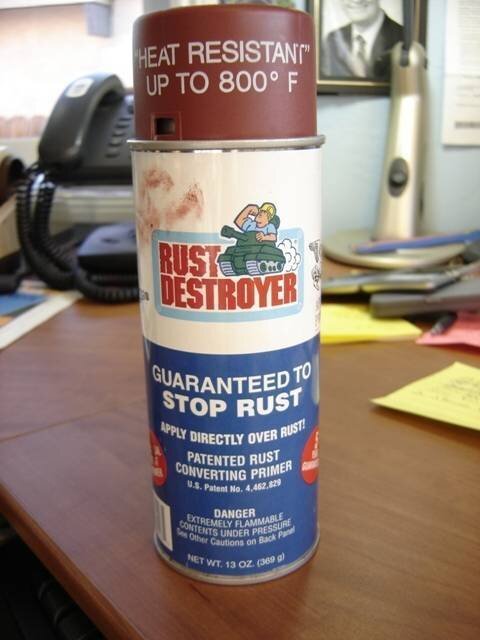 We'll be calling you soon to do ours

That's on my list of to-do's. Where did you buy your springs and hardware?
Expand signature
Backlash

Backlash said:
That's on my list of to-do's. Where did you buy your springs and hardware?
Click to expand...

there's a place in el cajon called Aros trailers that i got all the stuff from. there's also SD Trailer in the college area.

jeff- i'm gonna give that rust destroyer a try! thanks for the tip.

wow, awesome job this should be a sticky note! I hate rust, wish I had a pond I could back my boat in everytime I come home from salt.
Expand signature
Four J's Roofing & Remodeling!

Boat
Sold my Mako 171 Special after 24 great years of fishing and boating trips...so, no boat

vlionetti said:
If you buy a shit load of baring grease and coat the shit out of springs, hub and all the parts with a paint brush it will repel the salt water. I just did the same job on my fathers boat and it worked bitchen.
Click to expand...

A classic car restoration show on TV showed the guy installing new leaf springs on a corvette. When he was done he coated the springs with grease and then wrapped them with duct tape. He then recommended driving around with the springs wrapped for a few miles saying the flexing of the springs will cause the grease to enter between the leafs. I have also heard that a 50/50 mix of motor oil and kerosene will penetrate between the leafs and repell moisture, preventing rust.

The less crap we dunk into the bay would be appreciated . Great for a street car but not for dunking in the bay . Id hate to see the suface film when you back that trailer in the water! Sorry for sounding like a jerk cause im not!

Outside the Orange Curtain...

CorrosionX makes the blue stuff for trailers and the like. Part of their advertisment talks about the difference it made on a trailer. It's an ADVERTISEMENT! It must be true.

Amazing the trailer is galvanized but all the hard ware is common steel maybe zinc coated which lasts for 1 year and rusts like a big dawg .You gotta be kidding me .Is it just me or would it not make sense to use stainless u brackets and bolts or dip the trailer when the u bolts are already on ?

Jeffrey said:
Amazing the trailer is galvanized but all the hard ware is common steel maybe zinc coated which lasts for 1 year and rusts like a big dawg .You gotta be kidding me .Is it just me or would it not make sense to use stainless u brackets and bolts or dip the trailer when the u bolts are already on ?
Click to expand...

yeah, i dont really understand that shit either. they make one part galvanized and then all the fasteners are rust magnets that last one year. i dont get it