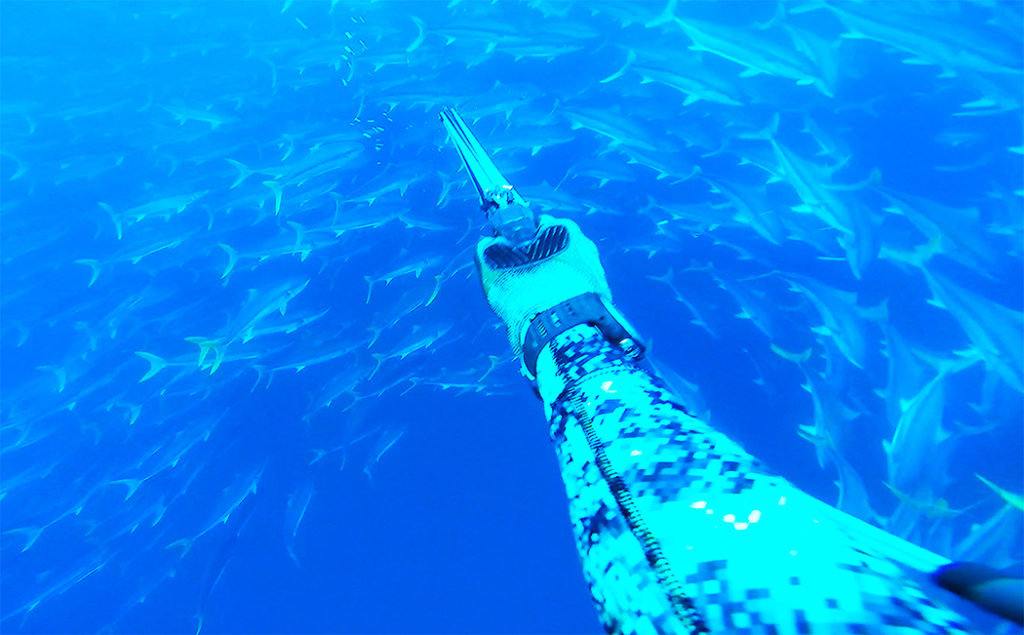 Cedros Island offers a pristine, natural environment that is comfortably situated just off the Pacific coast of central Baja California, which is home to a wide variety of endemic plant and animal species. The rich waters surrounding the Island support a healthy marine environment teeming with sea life, including a bevy of hungry gamefish that attract anglers from around the globe.

The opportunities for rod & reel anglers fishing from local pangas are seemingly endless, with a plethora of species that thrive in this truly unique region. As a matter of fact, so much attention is focused upon rod & reel fishing around Cedros Island that it is easy to forget that the clear, azure waters around Isla Cedros provide a perfect venue for divers; particularly free-diving spearfishing enthusiasts who pursue their targets from below, rather than above the surface of the ocean.

Such was the case recently when John Barrus, along with a few of his diving buddies from Ventura, descended upon Cedros Island with all of their gear and an arsenal of high-tech spearguns to see what might be in store for them as they plied these unfamiliar depths. 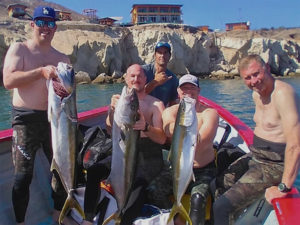 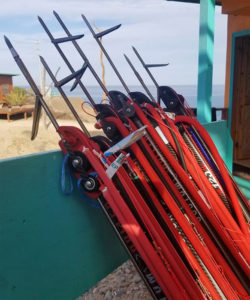 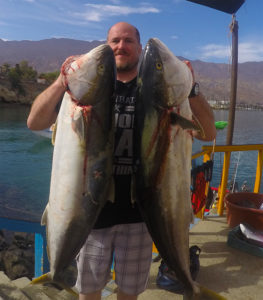 As it turned out, the group ended up with broad smiles on their faces after enjoying a 4-day adventure that netted them limits of yellowtail in the 20 to 40-pound class, several fat halibut weighing between 20 and 30 pounds, along with an impressive 80-pound broomtail grouper.

Barrus reports, “We heard about Cedros island from a friend that loves to fish there with rod and reels, and he thought we would find some success spearfishing there as well. So, we decided to give it a try and, believe me, It did not disappoint. The weather was amazing, and the accommodations were fantastic. We enjoyed clean nice rooms and were well feed, often having our catch of the day prepared for us in various ways.”

He continued, “We spent 5 days running all over the island, consistently finding clear warm water, and beautiful diving conditions. The amount of sea life was incredible. We were often schooled by multiple species simultaneously. The barracuda and bonito would intermingle with large schools of good-sized yellow tail that were lurking back with those illusive home guards weighing well over 40 pounds.

The forktails were so abundant that we quickly stopped targeting anything under 25 pounds, looking only for a shot at a trophy fish. Patiently watching hundreds of yellowtail swim around searching for that big fish at the back was a truly fantastic experience.”

Barrus concluded his report by saying, “We spent most of the days making long drifts in the current across big reefs packed with fish, while our trusty panga Captain, Diego, went from diver to diver helping us to boat our catch. He was excellent. I can guarantee 100% that we will be back, Cedros is a dream location for spearfishermen.” 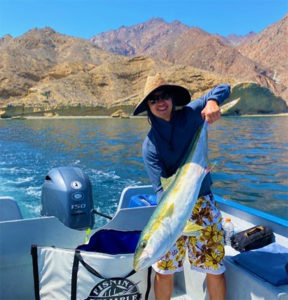 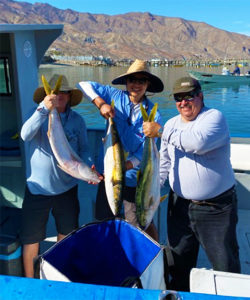 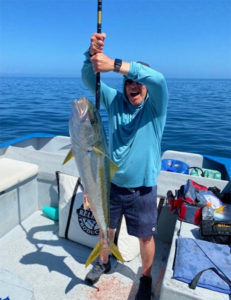 The action around the Island has been fantastic for those fishing with rod & reel as well.

Dylan Staak from Kentucky and a couple of his friends from Arizona and California managed to catch early limits of school-size yellowtail on each day of their trip. Most of the fish inhaled surface iron in either a blue and white or scrambled egg pattern. They also caught and released so many calico bass in the 2 to 5 pound class on brown and green plastics that they lost count.

Cedros veteran, Roberto Chavez, and his fishing buddies, Andy Wand, and Mark Fineman were able to catch a few of the illusive dorado that have been swimming around the Island lately. They took dorado in the 10 to 12 pound class while trolling off the west end of Cedros using purple feathers.

It was the 7th trip to Cedros Island for Chavez, and he commented, ”We were on the boat Fish and Chips with Captain Balam, and targeted yellowtail, calico bass, sheepshead and dorado.

On our first day, we headed straight to the trench between Cedros and Natividad right in front of the salt pile. We yo-yo’d Salas 6x Jrs in blue and white, scrambles egg and dorado colors, and used 30 pound top shots with 50 and 60 spectra backing. Andy and I had Torium 20 and 30’s on the hotel’s Seeker rods. However, Mark used his own Talica reels on his Terez rods.”

Chavez continued, ”We boated 14 yellowtail in about an hour and a half, and they were all in the 10 to 15-pound range. The bonito were thick so we had to work our way just under them to get to the yellows. We released about another dozen or so before we headed back to shore.”

“The second day we caught some mackerel and headed to the south end of Natividad for some calico bass action. We were not disappointed. Plenty of 5 to 6-pound calicos with a lot of barracudas that tore through our Fishtrap and other rubber lures. Colt Snipers were effective but got hung up on the thick bull kelp.

The next day, we headed to a rockpile on the southwest end of the island for some bottom action on sheepshead and grouper. Lots of current so we used dropper loop rigs with 12-ounce sinkers, 2/0 “J” hooks with some frozen squid. Landed a couple of larger 3 to 5-pound sheepshead, some white fish, and assorted bottom fish. It got slow towards noon so we headed back to the yellowtail area to finish the day. We ended up catching plenty but ended up releasing the majority of them because we already had enough yellowtail fillet packed away in the hotel’s freezer. We all had a great time, along with some sore arms from all of the fun we had.

His buddy, Andy Wang, concluded the report by saying, “We had a great trip and caught the most diverse selection of fish species that we have ever caught in the past 7 years of coming. We took yellowtail, bonito, sheepshead, calico, and dorado.”

The final verdict is in. No matter whether you want to target your fish from above, or below, the ocean’s surface, Cedros Island is the place to go!
Reactions: Cheech, Dogman619, Blackfish and 8 others
Upvote 2
S

Know of a buddy who's been free diving at Cedros for years. It's become his favorite of the many places he's spear fished all over Baja. Consistently good conditions, lots of fish, hard working professional panga skippers and better and better facilities will make this a popular spearfishing destination for sure.

Plus for whatever reason, Cedros doesn't seem to be as sharky as many other islands and high spots........ "Whitey" demands his space.
Reactions: marlyn and Tunahead
Upvote 0

Great report and pics..and NICE FISH all!
Boy I miss the 5.5 day trips to Cedros over
many years. What a fishery. Still the same.
One of the remaining unspoiled jewels.