Left Cabrillo Marina at 5:30 AM with 84 y/o Pop and made a quick stop at SP Bait. Picked up some "cured" sardine (price went up a little bit) and made our way to the Lighthouse. Thought about heading to the East end to look for the Bluefin, but figured Avalon would be busy and etc. etc, so pointed the nose to the fat part of the island.

Little bit of a mixed swell crossing, but lit aid down nicely the closer we got. Arrived at YT Point/Empire Landing and snooped around for a good place to anchor. Couple of other boats in the area and little to no action. Water, 68 degrees and an undecided current. Anchored in 90ft and gave it a shot. Didn't like what I saw, so made the call to pull up the pick and make a move.

Well...West or East? The wind was forecast to come up from the West (things were pretty calm at the time in both directions) and figured we would get some relief East of Long Point. East it is! Stopped at Red Bluff on some marks and almost threw the anchor, but we kept going. What a majestic place. 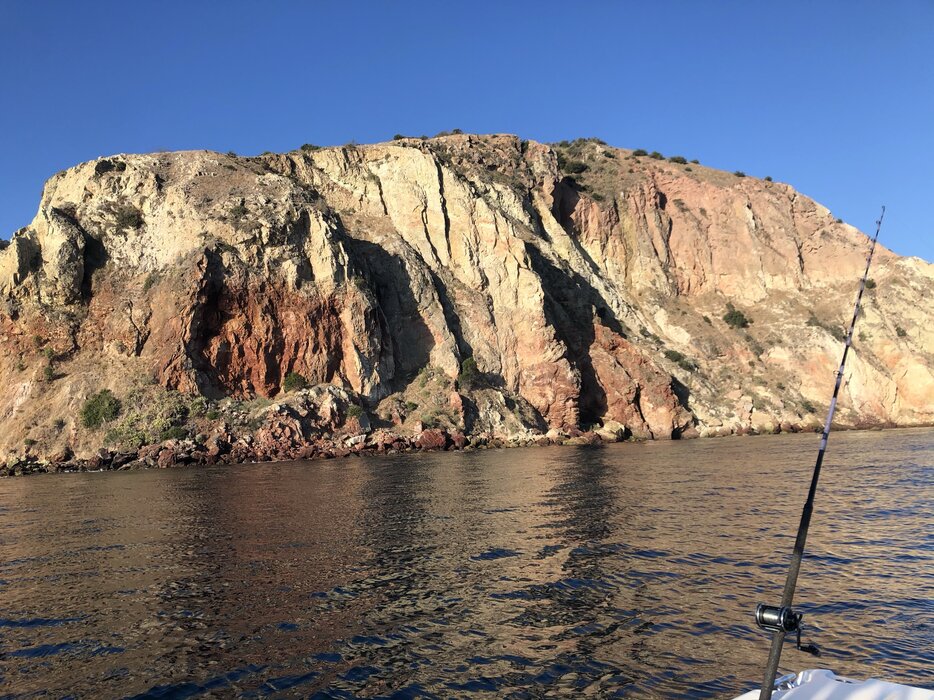 Made it to Long Point and snooped around a few rocks and the machine lit up! Water still around 68 and an off color green. Uphill current and we anchored (after a few resets) in 85ft, with our stern pointing in towards the island (always a good thing, imo). The Bonito started to bite right away and a few Bass and barracuda joined in. Chummed hard with cut up squid and threw some one's and two's. The current switched and we swung around about 180 degrees and guess what? The bite died. A beautiful Boston Whaler Outrage decided to roll in to our little outing and drop anchor a stone's throw from our bow...Always amazes me how some people just don't have an ounce of courtesy or respect. I mean...Jeez Louise. And the seals were around and annoying, as usual.

Still a lot of life on the monitor, so pulled anchor and bumped us around the area, slow trolling a few baits.

Well, as the boat is drifting quickly and the wind was coming up...we were getting close to the moors and I'm hammered. Bonito...?...Nope.

Well, no complaints over here and did the song and dance on 20lb test with a #2 hook. A little bit of this and a little bit of that and then Dad gets the gaff in on his 1st shot. 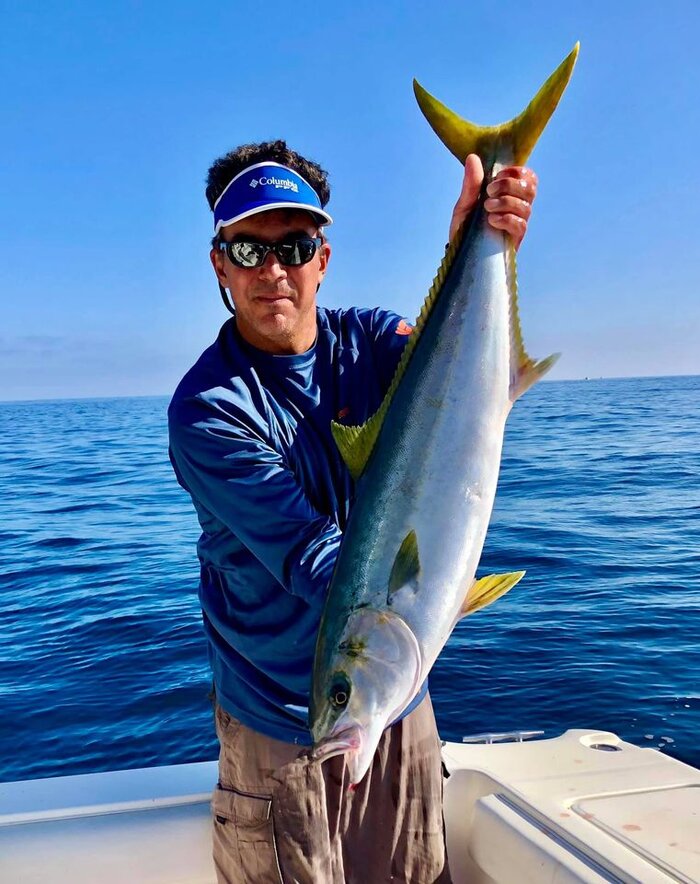 Catalina produced the 3 B's and I was lucky enough to get a "Shoe Salesman" as my Dad always puts it. A lone YT salesman, cruising through and grabbed the lucky bait. Weather came up quick and it was Howling by 11. Left around 12:30 to whitecap city. Made it home safely and filled up the tanks with Petrol.

Settled in back at the dock and thanked the man "upstairs" for a safe trip and time on the water with my Dad.

Oh... and my he was fishing 12lb test the whole day and got smoked twice on what had to be a few friends of the YT we landed. Hooked pulled on one and the other dove straight down into the structure.

We love Catalina and as always, thankful to be on the water.

Tight lines and All the Best!

Solid YT. Thanks for the pics and report.
Toggle signature
-AH
I get skunked and I can not lie
Reactions: Donkey Nick
Upvote 0
H

Thnx for another great report. One is better than none!
Reactions: Donkey Nick
Upvote 0

Your consistency catching Catalina YT is amazing Nick. You and Pops have it dialed in.

Lookin forward to seeing your son fish with you and grandpa more and follow in your YT catching steps.
Upvote 0
Show hidden low quality content
You must log in or register to reply here.

Islands Limits of Bluefin on the Anchor at Catalina with Pop