Pineapple Express weather patterns. I hate ‘em. But we went anyway. Never again (yeah, right). At least I am not bitter!

My son Sean and I launched from Huntington Harbor on Monday. Picked up a scoop of kraken squid from Nacho and crossed to Red Rock in fairly calm conditions. Drifting squid, fly-lined and dropper loop, got a couple in short biters, probably calicos, but nothing stuck. We slow trolled smelt to Empire and back for zippo.

Heading to the East End, the south-east winds started howling as we got to the slide area, along with water temps dropping rapidly. No Bueno. U-Turn, heading back to the west. Jet skiers were tearing it up between Frog and Whites, so we didn’t even bother. Back between the MLPAs, there were a few sporties and private boats on the hook. No one was bendo. Guys we talked to said yellows were a no show. We tried for a bit. They were right.

Heading west, we hit our rockfish spot for a smaller red and a whitefish, both descended. Slow trolling to the West End produced nothing. Hitting up a few beaches on the backside got us into some halibut, but the biggest was 21 ¾ inches. Enough to piss off the good humor man, Captain Kangaroo and Mr. Rogers at the same time. We anchored up in Cat Harbor that night, where Sean loaded the tank with perfect trolling size Spanish mackies and released a bunch of pencil barracuda.

Tuesday morning was semi-calm, so we worked east to Freddy's beach for one short halibut, until the wind blew us off the spot again. Heading back around China point, we hit up Mills Landing, the Soup Bowl and other beaches for nothing. Slow trolling mackies past Shark Harbor was a bust. We made a few drifts in Cat Harbor, where I finally get hit by something with size, but it came unbuttoned quickly. Sean released a small shark.

Slow trolling from the West End to Parsons was a waste of time. Hitting up the rock fish spot again produced a 3-pound red for Sean. Finally on the board! We picked up a spot on the string line at Two Harbors for a quick nap, and then slow trolled Empire until sunset. Same ol’ song and dance. I had more than a few cocktails that evening.

Wednesday morning, a last gasp attempt at rock fish produced 4- and 5-pound reds for Sean. I released a short calico. At least we have enough for a fish fry. To say the fishing was tough is a huge understatement. We did not see, nor hear of, anyone catching a yellow. I hope someone did.

I’m sure the bite will come back shortly, maybe in time for the 4th of July weekend.

Stay safe out there and good luck!

Sean's on the board red: 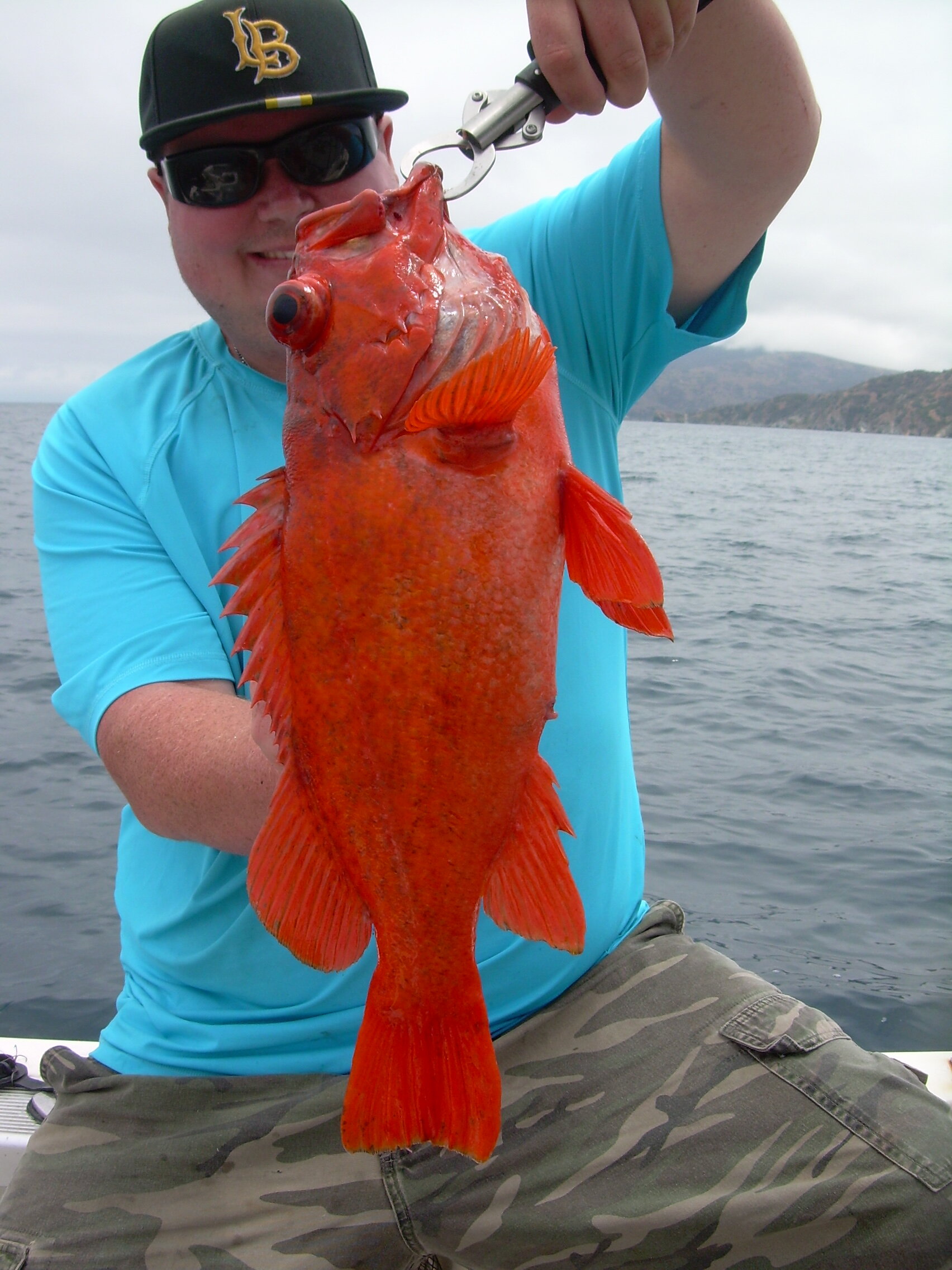 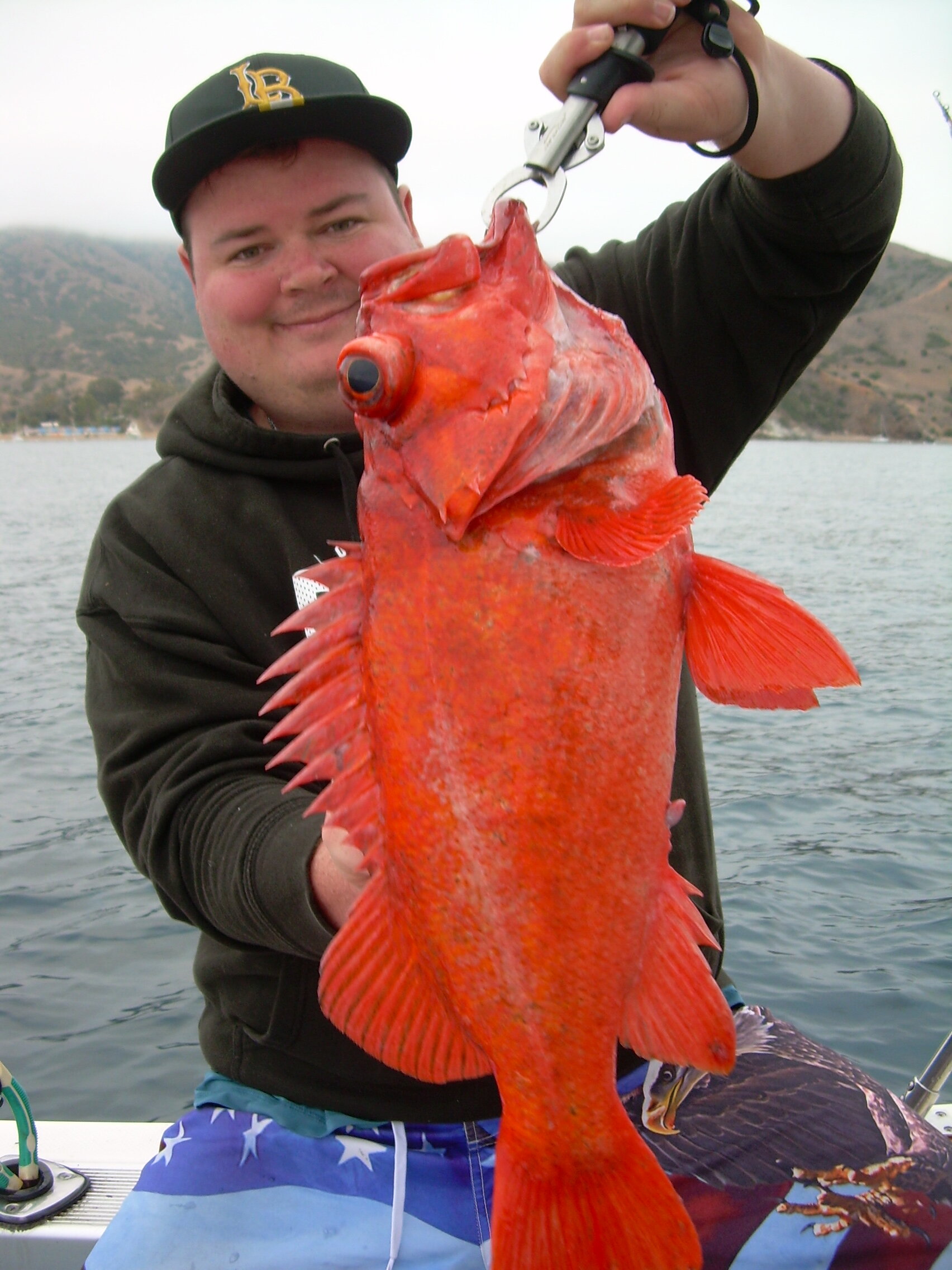 Beautiful reds.
We go when we can and hope for the best.
Glad you guys got another trip together.
Reactions: mhanson59hb
Upvote 0
J

Thanks for report skipper. Love the rhyme lmao. YT is my fav and hope they come around also. Heard that some are being caught at the Farm
Reactions: mhanson59hb
Upvote 0

Thanks for the report. Very Nice rockfish. Great effort to find yellowtail.
Toggle signature
-AH
I get skunked and I can not lie
Reactions: mhanson59hb
Upvote 0

Beautiful reds. I love to cook those things whole on the bbq.
Reactions: mhanson59hb
Upvote 0

I feel your pain... Again
Toggle signature
As of 01/21/21 - NOT MY PRESIDENT
In support of our troops
until they all stand, I will not watch any sport that does not respect the flags and anthems of all nations
Reactions: mhanson59hb
Upvote 0

Great looking reds Mike!! You need to make your way down here one of these day.
Reactions: mhanson59hb
Upvote 0

Sorry that you had to go home Wednesday morning. I was there on the Triton, we fished the front side in a half-dozen places and saw yellowtail but they were pretty spooky. I got a smaller one, maybe six pounds, on an underspin jig about 9am and an hour later another angler got a good one, about twenty pounds, on a tube lure. Another was lost. Several other sporties tagged a few. So the weather is turning around and the fishing with it. You'll do better next trip!
Reactions: mhanson59hb
Upvote 0

We took the family for two nights. Weather was not good, southern eddie, wind, overcast. Today was nice on the way in.

Cat has been brutal to me this year as well. Last week I had high hopes with a tank full of squid expecting wide open calico and we could hardly scratch out 4 or 5 all day. We covered from Church Rock up the front to Eagle Reef and couldn't find a spot with any current. Feelin your pain Brother!

Ryan_J said:
Cat has been brutal to me this year as well. Last week I had high hopes with a tank full of squid expecting wide open calico and we could hardly scratch out 4 or 5 all day. We covered from Church Rock up the front to Eagle Reef and couldn't find a spot with any current. Feelin your pain Brother!

Same for me yesterday. It was SLOW…
Reactions: mhanson59hb and Ryan_J
Upvote 0

It wasnt for a lack of effort - sounds like a great time on the water!
Reactions: mhanson59hb
Upvote 0
Show hidden low quality content
You must log in or register to reply here.

Islands Catalina 7/3/21 with some paddy yellows