Catalina report 8/16 – The old man evens the score against the odds! 30+ pound yellow!

I took my son Sean fishing to Catalina for a few days starting 8/14/2017. This would be his last trip of the summer as he is going for an engineering degree and resumes school in a few weeks, while working part time.

We left Huntington Harbor on Monday and picked up a half scoop of 4 to 5-inch sardines from Nacho. We motored out to the oil rigs, the Avalon bank and the direction of the 152 without seeing a kelp paddy. The water was getting cooler as we headed south, so we made a break for the east end.

Trolling the back side east with Spanish mackies and smelt produced exactly zero fish, so we made a move to the front side. After enduring kooks running up on our trolling spread, sea doo rentals trying to commit suicide via hook and line and limits of wind - against all odds Sean gets a ripper that turns into a 13-pound yellowtail just west of Frog Rock on a slow trolled Spanish. Yeah Team! 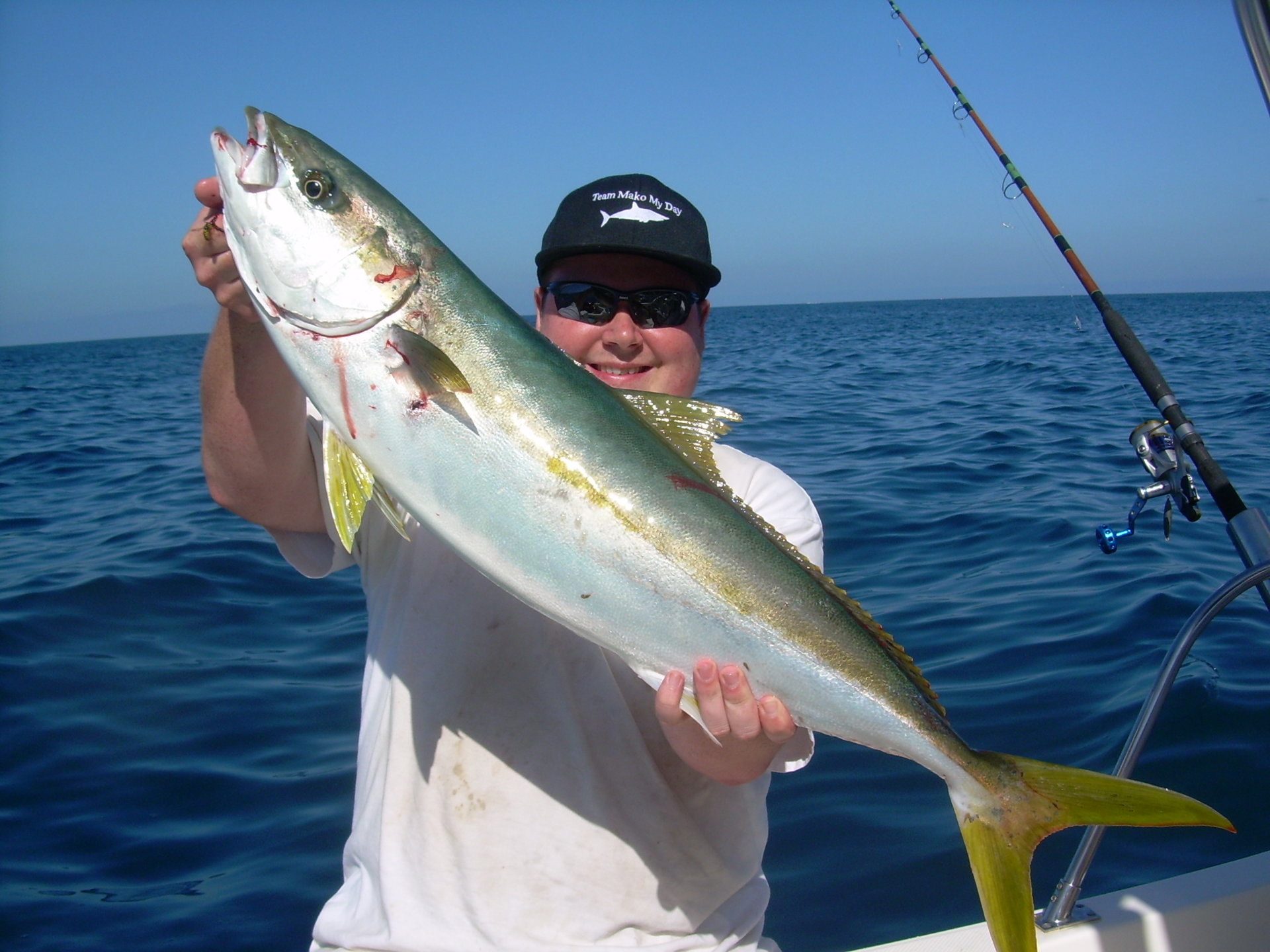 That night we got a mooring in Avalon and proceeded to whack cailcos on the mini sardines for an hour after dark. A few “mooring margaritas” later for me and we called it a night.

Night time calico. I did not even get a shot of the 3 bigger ones he caught! 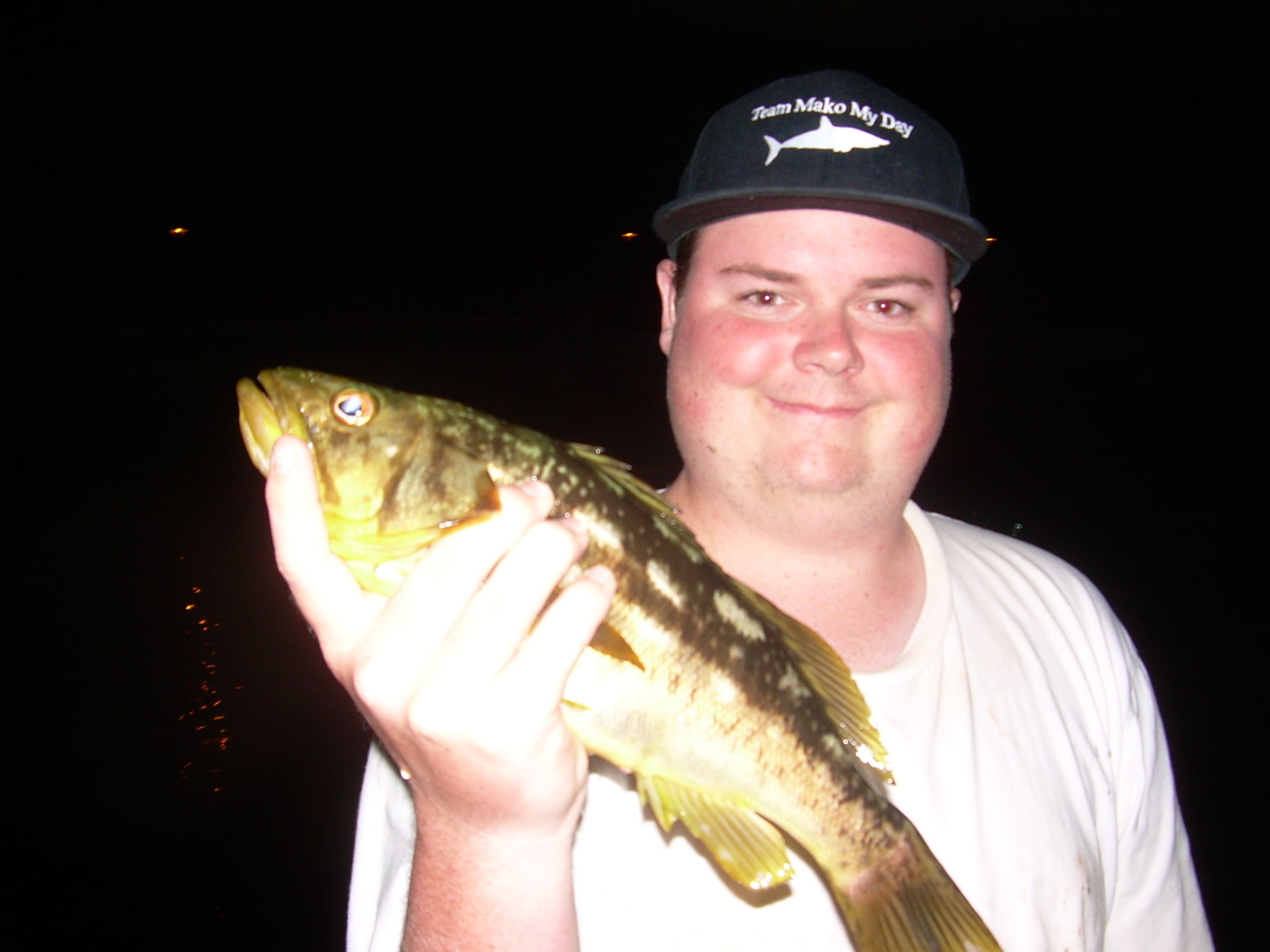 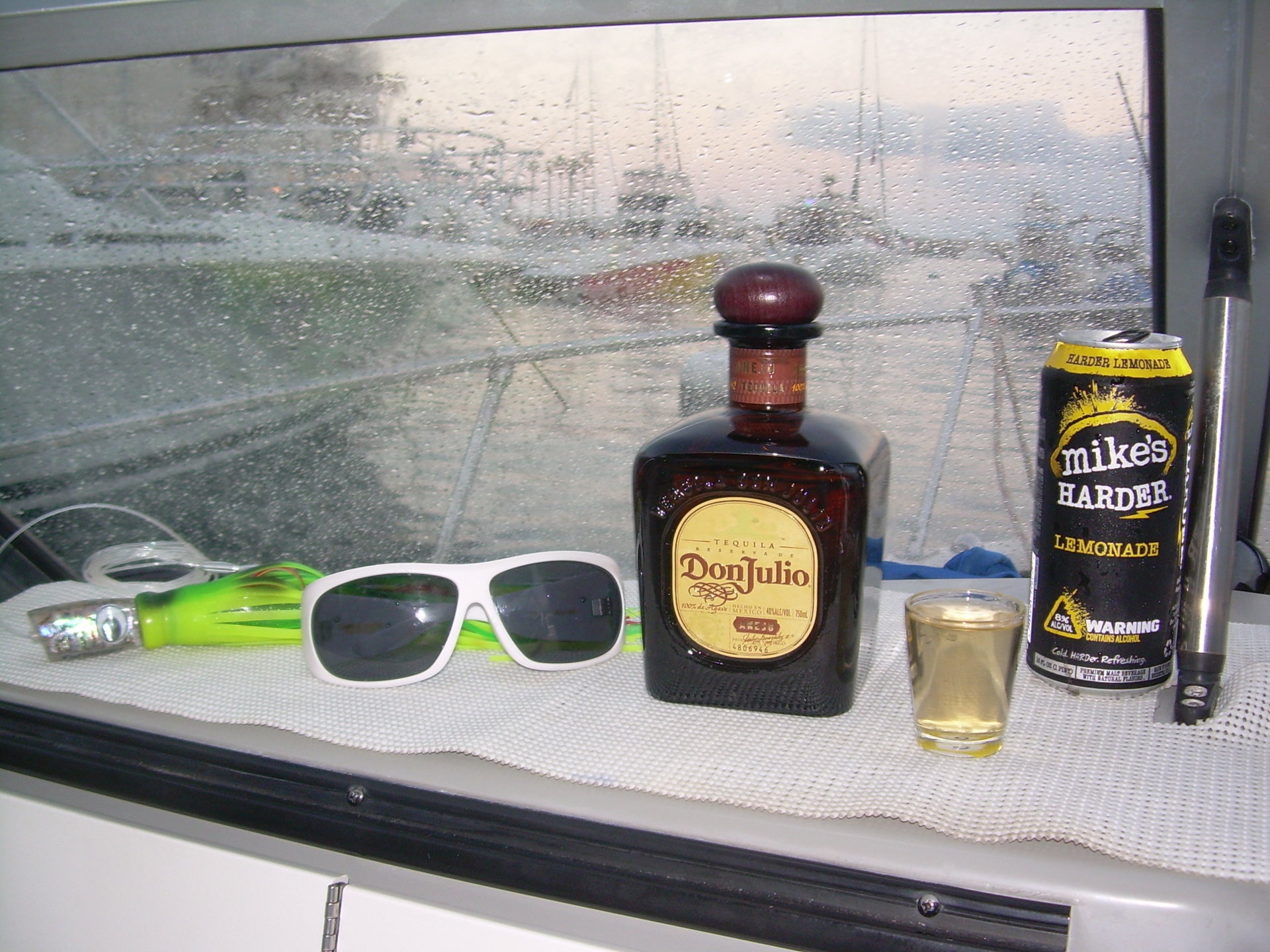 Tuesday morning, we woke up to our boat knocking against our neighbor. We were on mooring Q, and it is really tight to mooring P. After issuing apologies, we headed out looking to catch some bait, and I noticed my Calstar and Okuma Cedros spinner combo is gone. I can only figure it caught on the other boat and went in the drink. We went back and tried to spot it, but it was a little too dark, as well as windy so we could not find it.

We returned at 9:30 AM after the sun came out and I jumped in the water and found the set up under the bow of the other boat. The very kind owner of the “Summer Time” volunteered to dive down and retrieve it for me, as I was having ear pain. Loss avoided. Thank you!

Bait is very tough to make at the island, but we managed about 8 pieces and started trolling them for nothing. We moved west to Empire, where Sean released a nice cuda, but overall fishing was slow. We decided to go back inside Long Point as the wind was picking up and saw the Patriot just about to leave, but had a few nice yellows hooked up at Frog Rock. Another boat slid in behind them and hooked something big, but we never saw if they landed it or not. We did not catch another thing for the day.

We spent the night at Descanso, and the morning found us trying to make bait. We did not catch a single one! We still had a few Spanish in the tank from the day before, so we slowed trolled those. I had saved the biggest one for last and pinned it on.

Right off of Toyon Bay, a dude in a Sea Ray style boat came charging right up our trolling spread 25 feet from us. Some people have no friggin clue. Don't be "that guy". This was when we saw him later, after cutting in front of us again. Avoid this douche at all costs: 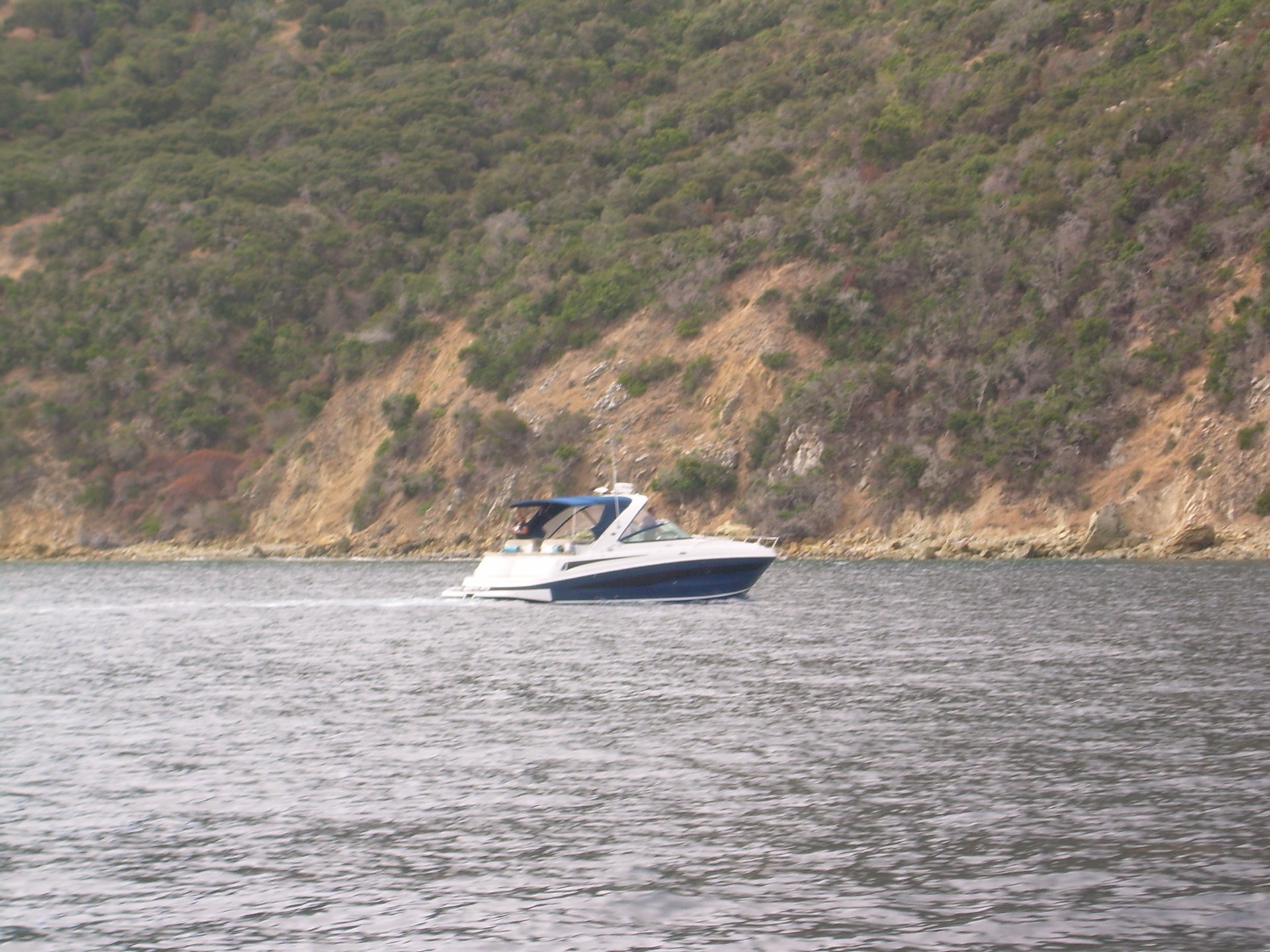 Sean clears the other lines and motors us out to deeper water. The fish made 3 big runs – the whole time the dog is lurking near the boat. I actually feel the dog take the fish and run with it, but it is just too big for the floating fur ball to handle. The bite marks on the tail confirms this later.

I drop the reel into low gear and start short pumping the fish into range, the whole time the dog is just waiting for another shot. I was putting too much pressure on the fish, but managed to work it to the surface, where Sean put a perfect gaff shot into its chin – and 30+ pounds of yellowtail hits the deck. Back at home after bleeding out, it was still 30.5 pounds! My first yellow of the summer after seeing Sean boat 26 and 35-pound yellows earlier in the year. The guy who almost ran us down had to watch the whole battle. Sweet. 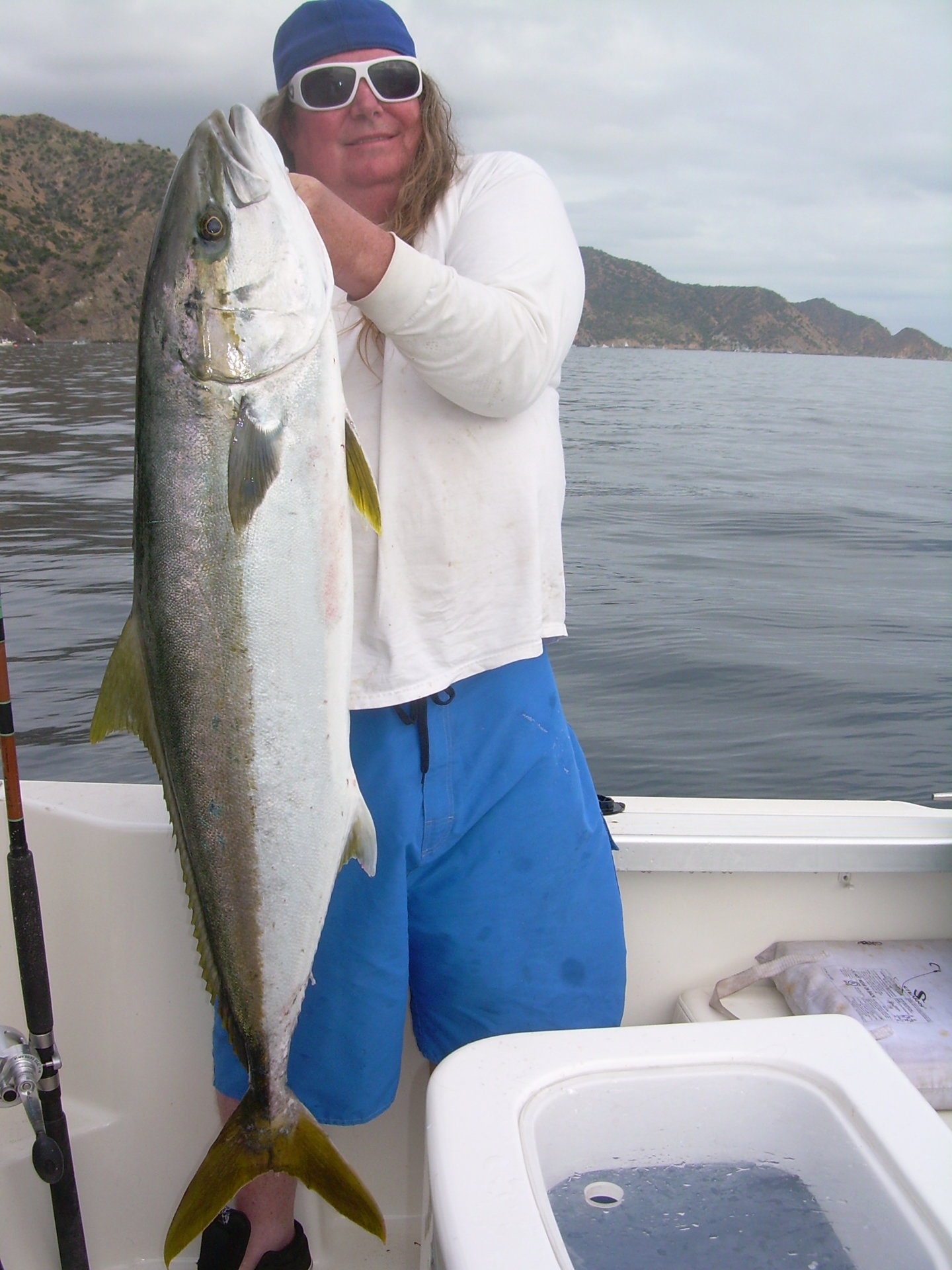 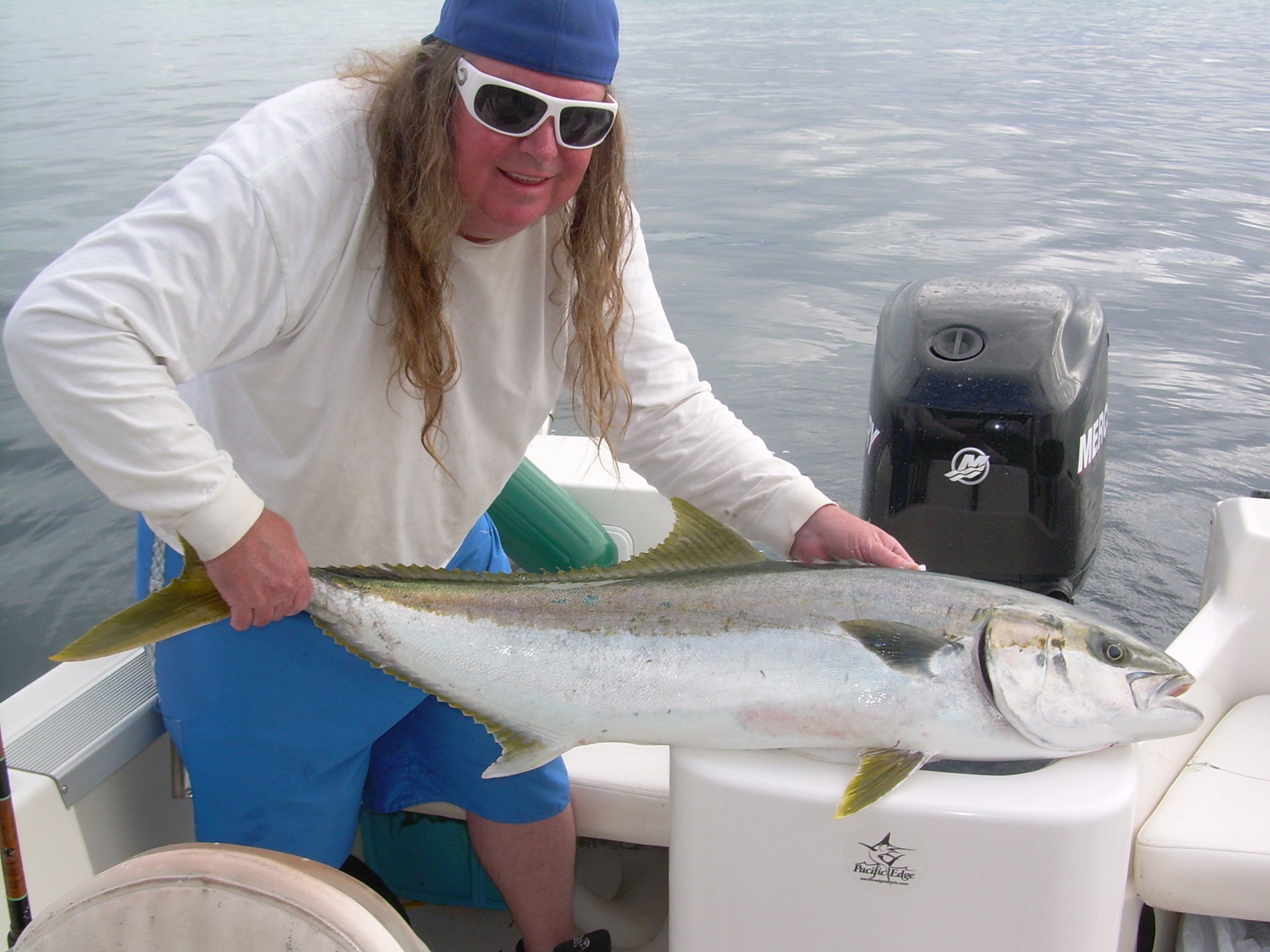 Bite marks from the dog. Too bad, so sad for you! 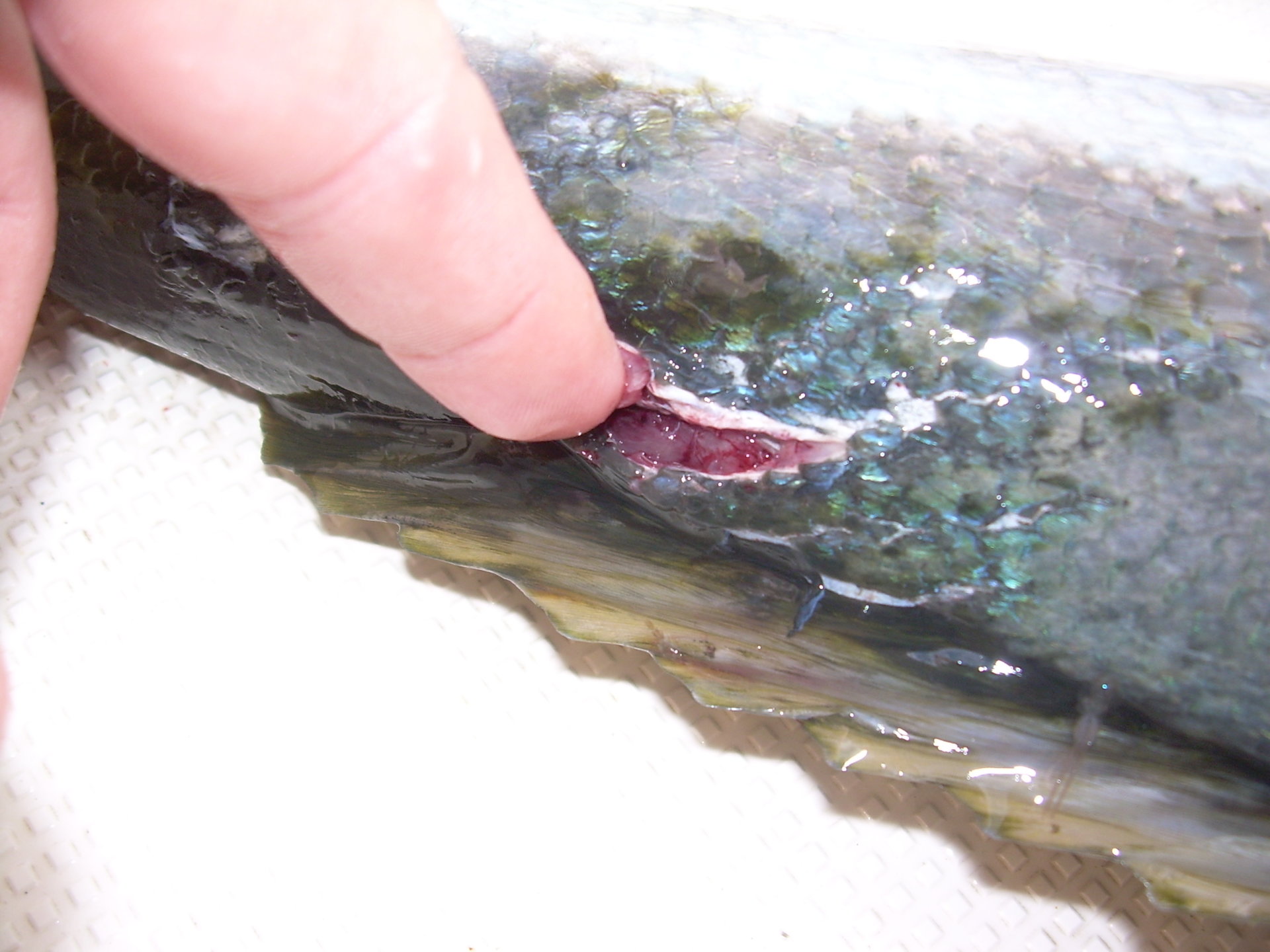 The fish was too big for our fish hold, so we had to cut our trip short a day early. I need to get a large kill bag for next year. Anyway, fishing was slow over-all, but persistence paid off with quality over quantity. The biggest issue was securing bait. It can be had, but you have to work at it. Coming home was pretty bumpy as it was white capping by 11:00 AM, but we made it home safely and with some fillets!

Be safe and good luck out there!

Reactions: 998R, tresbien, The Freediver and 24 others

Nice going Mike, you guy's have had a great summer. Once again, sure makes me miss fishing with my Dad. Congrats!
Reactions: FishAcquisition and mhanson59hb
R

I have not found it difficult making macks at Avalon, the wall at the express terminal east along the beach, sabiki and a couple cans of cat foot usually do the trick.
Expand signature

Congrats to both of you on your fish! Nothing better than that father/son time. Good luck to your son with the engineering. Great field to go into...challenging and rewarding! You must be a proud papa.
Reactions: mhanson59hb

Do good in school Sean.
Reactions: C-4 Fishing and mhanson59hb

I like reading you and your sons reports. Beautiful Yellowtail
Expand signature
The Killer in me is the Killer in you
Reactions: Pgnracr and mhanson59hb

I love reading your Catalina reports with your son. Another awesome trip.

Congrats on that big beautiful Catalina yellowtail. Fish that size on the front side are really special.

Those "mooring margaritas" sound good....lol. I like mine with Mezcal instead of tequila - highly recommended if you haven't tried it.
Reactions: mhanson59hb
P

Mike, that's a great report and congrats on the nice mossy! Dang that thing has shoulders! You and your son own that rock called Catalina.

Figures you'd be using "Mikes" hard lemonade, Mike. Going to have to try one of those.

Best of luck to your son. Takes a major "thinker" to be an engineer.
Reactions: mhanson59hb
P

flyliner said:
I love reading your Catalina reports with your son. Another awesome trip.

Congrats on that big beautiful Catalina yellowtail. Fish that size on the front side are really special.

Those "mooring margaritas" sound good....lol. I like mine with Mezcal instead of tequila - highly recommended if you haven't tried it.
Click to expand...

Don't take this the wrong way, Jonathan, but you don't come across as a guy to down that worm!

Always respect a man who can make Catalina trips work. That island has been slow as hell this year.
Reactions: mhanson59hb

lurking in the shallows

Very cool report. I was a structural engineer for Boeing for 22 years. But mostly old McDonnell Douglas then they devoured the old Douglas aircraft plant. Laid off guys with triple my seniority. Big Business. No hard feelings I had many great well compensated years. Now more time to fish!!! Lol
Reactions: mhanson59hb

Pgnracr said:
I was a structural engineer for Boeing for 22 years. But mostly old McDonnell Douglas then they devoured the old Douglas aircraft plant. l
Click to expand...

I hear you! My uncle Donald Hanson was the national public relations head at Douglas Aircraft for many years at the plant at Bolsa Chica road in HB. Maybe you crossed paths at some point with him. He was a good man.

Unfortunately, he died in a hiking accident in Azusa canyon more than a decade ago. RIP. He was a scout leader and taught me to love the outdoors, and along with my father, developed my love for fishing and adventure!
Expand signature
Go ahead, make my day...