I didn't even want to post this after reading all the other fabulous reports from Cat, but God hates a coward, so here goes!

My son Sean and I were fired up to go fishing for the first time in 6 months, even though we knew it would be tough sledding after the holiday and the lousy tides predicted. Sometimes you just gotta go when it comes together.

We launched from Huntington Harbor Tuesday morning and picked up a full scoop of squid and a ¼ scoop of surprisingly good sardines from Nacho. Arriving at the Vs around 8:30, there were about a dozen boats strung out up the line. No one was hooked up, so we slow trolled ‘dines up to Salta Verde without a nibble. The smelt were having a party in this area, and I put about 10 in the tank while trolling by.

The Rail Time was anchored off the kelp just west of Ben Weston, but again no one was bendo, so decided to hit some of those backside beaches. The first one produced a few calicos, released. The next one showed more promise, as Sean and I got a double on short halibut on the squid. We each caught another short up shallow.

With all the short males in one spot, I knew they had to be hanging around a bigger female and sure enough, I hook into something a bit more substantial. A nice flattie comes to color, and Sean hits it right in the head with the gaff shot, but it shakes off. Fortunately, I had the reel in free spool (a lesson learned the hard way) and when she came up again, a stomach shot puts 10 pounds of halibut on the deck. Finally! Possibly good karma from picking up lots of balloons on the way over? A few more drifts produced a few more shorts, calicos and even a big cuda for Sean.

I pulled a barely legal 22 ¼ inch halibut off the next beach, which was released to get bigger. The bite seemed to die out, so we headed over to Cat Harbor to eat a late lunch. The wind was picking up from the SW and blowing straight in and getting uncomfortable, so it was time to head around to the front. We saw the Rail Time again setting up at West Cove, but it was just too snotty for us.

Slow trolling from the West End to Parsons was a bust. So was slow trolling Empire to Rippers. I was beat up by now, so we picked up a mooring at the Isthmus and I went to work on the Don Julio.

Wednesday morning, we tried to make bait at Parsons - usually a reliable spot. Nope. Slow trolling our few remaining dines, nada. OK, trolling is not working. Rock fish were sounding good right now. It was all whitefish at our main spot but moving to a smaller rock we put some big reds in the sack, and assorted smaller rock fish were descended.

Back over at Empire, we talked to a guy who said he caught 2 yellows (he did not say how big – but I am glad someone caught a few of any size), so we anchored up and started chumming squid. This is when the calicos went crazy. Like every cast crazy. All were released, but no yellows for us. And of course, no one caught any after we got there. Maybe it’s me?

We called it early and got a mooring in Avalon for some relaxation and more Don Julio for me. Take-out pizza from Antonio’s for dinner.

Thursday morning found us doing the thing I hate most: trolling rapalas. Frog Rock to Long Point. We did not catch a single fish all trip trolling either dines or lures. Zippo. We gave the rockfish spot one last try and Sean kept a nice sheepshead and I released a legal calico. The ride back to the barn was smooth.

Overall, it was a fun trip and getting the decent flattie took some of the sting out of not getting a yellow. Anyway, the weather was nice and it was good to get out of Dodge for a while!

Good luck and stay safe out there! Mr. Catalina. I really like the multiple day reports you and Zika put together. Doing it from small cuddy cabin boats is great. Ocean camping.

Man that says a lot about luck or being in the right place at the right time. Still the fish you have there beats anything I've caught lately.

Sweet flattie!
Why is trolling rapalas your least favorite? I just stocked up on a few
Reactions: mhanson59hb
Upvote 0 Downvote

Nothing wrong with that! Quality fish and good times.
Reactions: mhanson59hb and the SLIDER
Upvote 0 Downvote

I'm not that guy.

Fun couple of days, works for me!
Toggle signature
Thanks for your report. Hook up! Cory
Reactions: mhanson59hb
Upvote 0 Downvote

Nice work and thanks for the report sounds like a good time, enjoy those halibut dinners!!
Reactions: mhanson59hb
Upvote 0 Downvote

Nothing shameful about that trip at all except that it might not stack up to some of your typical trips with nice yellows in the box. I would be looking forward to writing that report with a keeper butt, bunch of calicos and short butts, baracuda, some nice rockfish a legit goat, warm pizza and some Don Julio to boot. You added another great memory to the bank buddy.

Heading to Cat tomorrow. Hope the current will be workin for us.
Reactions: mhanson59hb and the SLIDER
Upvote 0 Downvote

Looks good to me Don mhanson59hb.
I fished local for just a bit in harbor and Platform Ester today for a BIG rad report. that 3 day catch sounds good to me! i’d take a legal halibut anytime i can get one.
making bait at Catalina has never been successful for me. have you ever tried in front of Avalon? i made some mack’s there once.
great effort.
Reactions: mhanson59hb
Upvote 0 Downvote

acefuture said:
Sweet flattie!
Why is trolling rapalas your least favorite? I just stocked up on a few
Click to expand...

It's because out of all the 100s of yellowtail we've caught at Catalina, exactly 3 were taken on a rapala!

Now the Coronado's are a different story, I hear...

They do have their uses, they are invaluable for catching bonito for lobster bait!

Here is the one exceptional fish caught by Sean a few years ago when we were out of bait. 28 pounds and the boat record for a while...... Good luck to you! 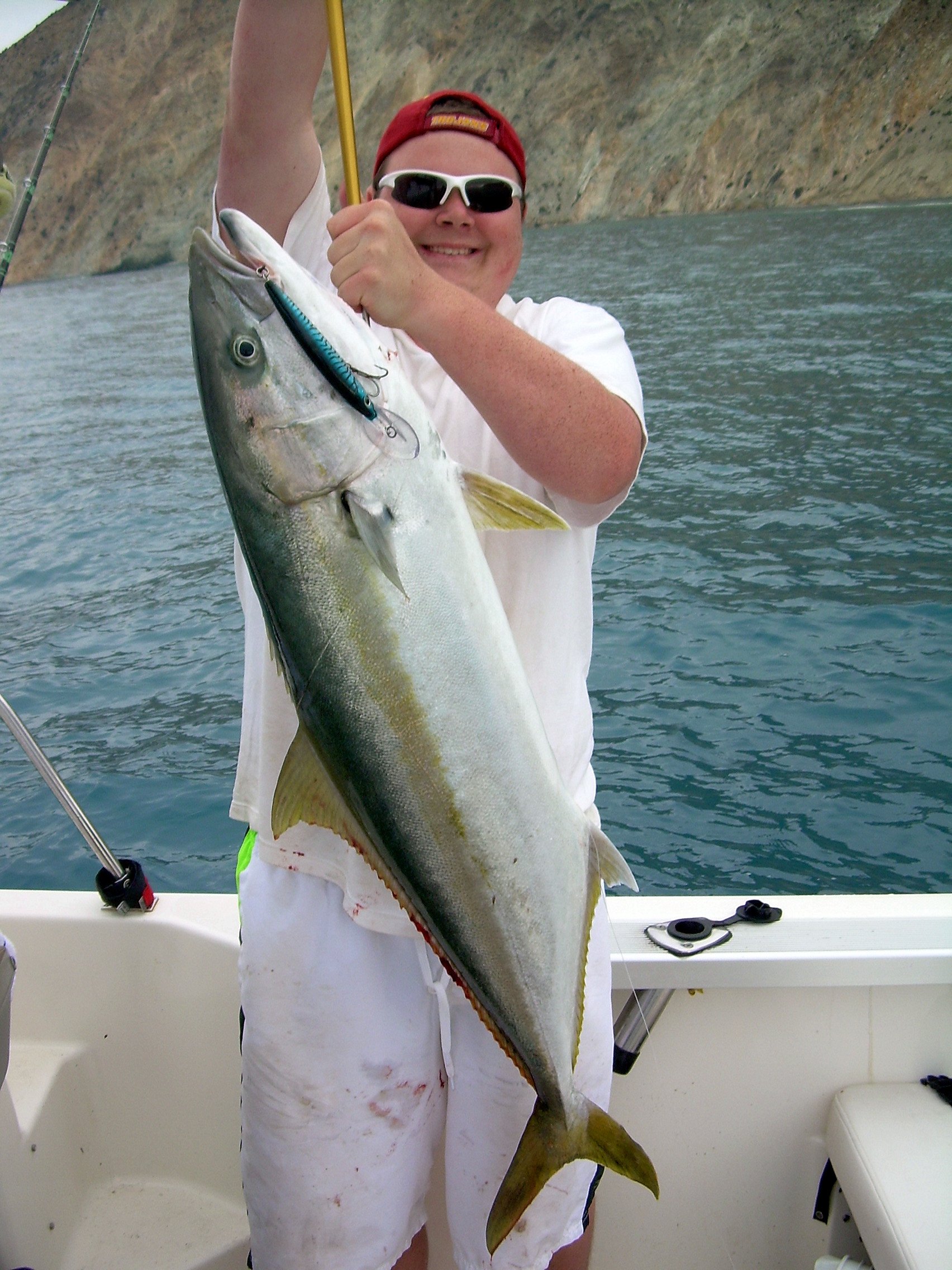 Wasitrytofish said:
rad report. that 3 day catch sounds good to me! i’d take a legal halibut anytime i can get one.
making bait at Catalina has never been successful for me. have you ever tried in front of Avalon? i made some mack’s there once.
great effort.
Click to expand...

Thank you. Yeah, you can usually catch Spanish mackies outside of the harbor in front of the cans or greenbacks in front of lovers cove. Just was not happening for me this time.... Smelt you can catch by kelp lines or in green water. Even the locals were having a hard time making bait for some reason. Good luck!
Toggle signature
Go ahead, make my day...