Short version: Windy, water rolled 62 degrees, no yellows or seabass for us - calicos and rockfish biting. Nacho had live squid. Skip to pics below.

Novel: Hoping to get in a trip before the high winds start this week (yeah right), my son Sean and I launched from Huntington Harbor Sunday morning. We got a scoop of live squid from Nacho pointed the bow toward Long Point. It did not take long for the wind to pick up and start white capping, forcing me to slow down and take the proverbial 3-hour tour – a bit wet of course!

Finally at the island, the water was rolled and green, around 62 degrees. Heading around the east end, the temp was dropping and blown out – completely unfishable for fair weather fishermen like us. At Seal rocks, we released several short calicos until the wind forced us off the spot. We anchored up off Hen Rock and chummed up a school of mixed Spanish/Greenback mackerel and big sardines. Only a few short calicos were caught as the predators never showed. Slow trolling big Spanish mackies the rest of the afternoon between the K20 and Frog Rock produced zippo.

Monday morning the wind was down, and we headed up to the Isthmus to try for some rockfish. Sean boated a nice sheephead and a good red. I kept perfect eating size 15 and 16 inch calicos and we now have the beginning of a fish fry. Hitting up some beaches, Sean released a just-short halibut. Dag nab it! Slow trolling from Parsons to the West End was a bust, but the sun came out making for a beautiful day. As the wind picked up, we anchored behind Indian Rock and tried chumming again, but not a single fish was caught.

Calling it a day, a mooring in Two Harbors was just the ticket. A few drinks and a dinghy full of drunk dudes dressed up in Velociraptor costumes provided some entertainment. They stopped by and asked where they could “find some lawyers to eat”. I didn’t have the heart to tell them it was the T-Rex that ate the lawyer in Jurassic Park. Heck, I may be wrong, they could have been "identifying" as juvenile T-Rex's.

Tuesday morning, we hit the rockfish again and Sean got a toad red and another sheephead. I put 2 reds in the box and then started descending the rest including various chuckles, sheephead and pooper groupers. A sea lion caught on and got the groupers on the drop. Oops. At least he wasn’t taking fish off our lines. Heading back to the barn was smooth until about half way back and the wind picked up, but we still were able to make 24 knots.

All and all it was a fun trip and even though we missed out on yellows and seabass this time, another trip in June has us looking forward to the future!

Stay safe out there and good luck!

Sean with a typical red 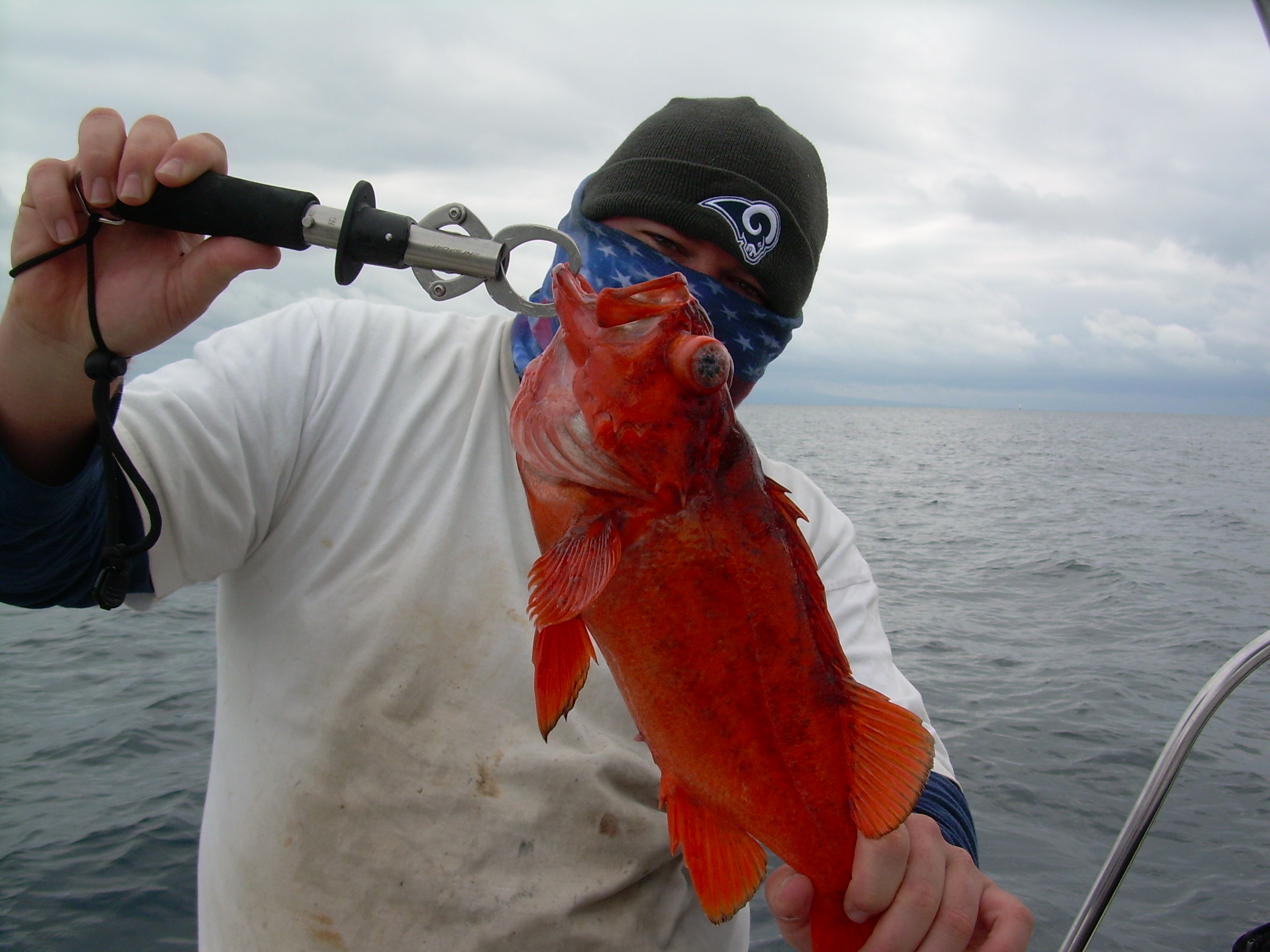 I have not kept a calico in years. Yum! 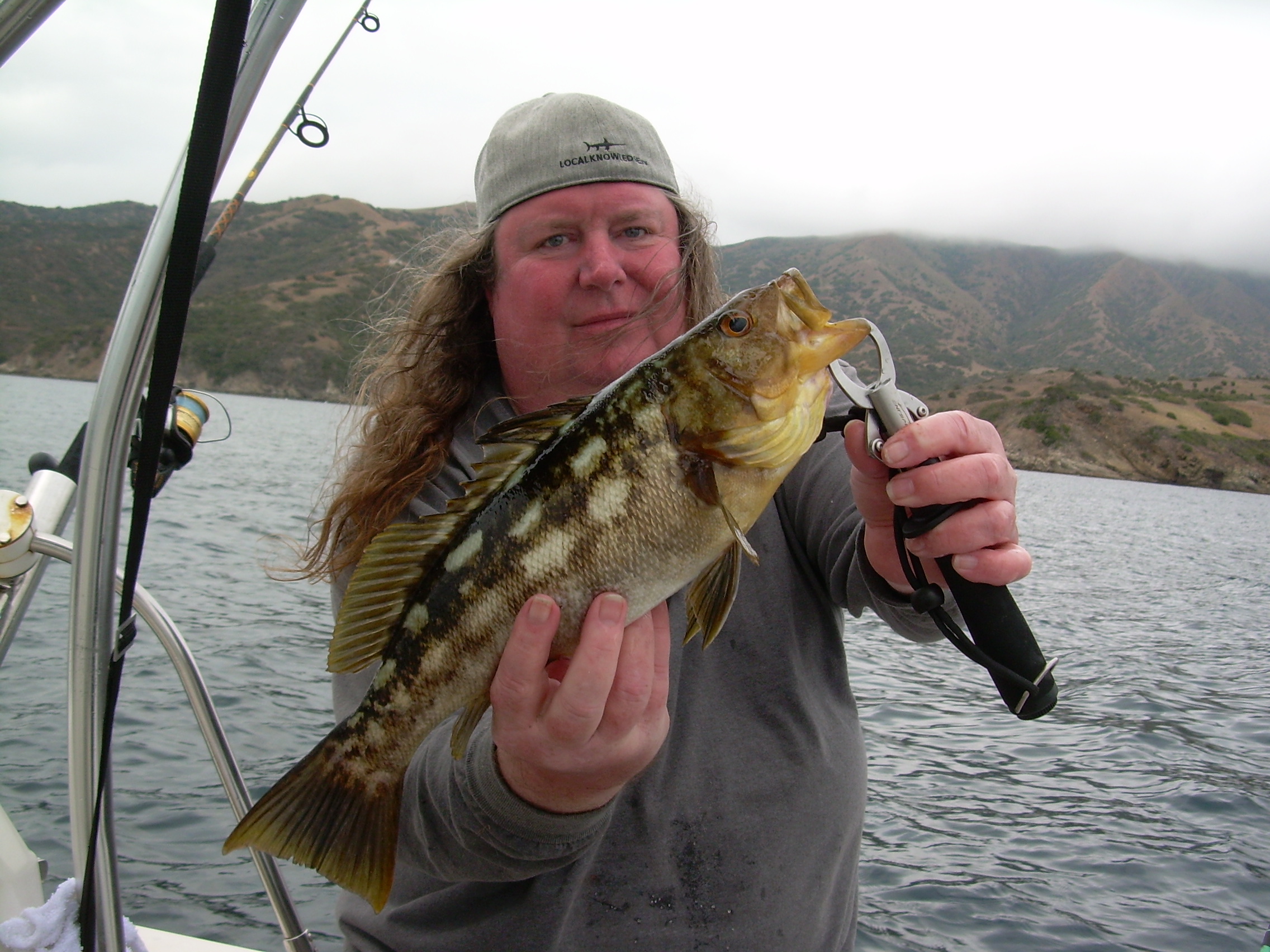 How many "buffalo milks" do you have to have at the Reef bar to ride around in these costumes? My guess: Quite a few! 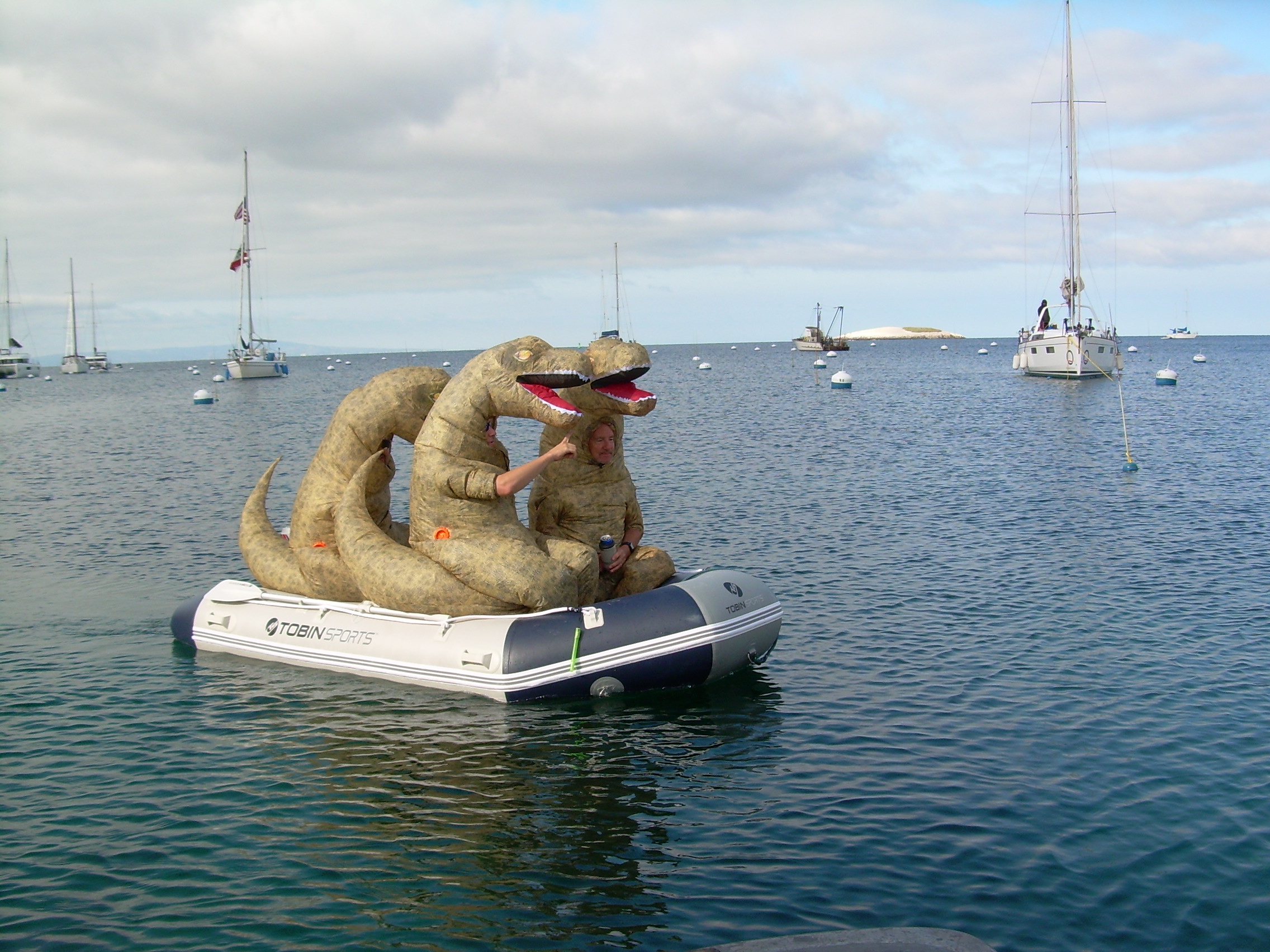 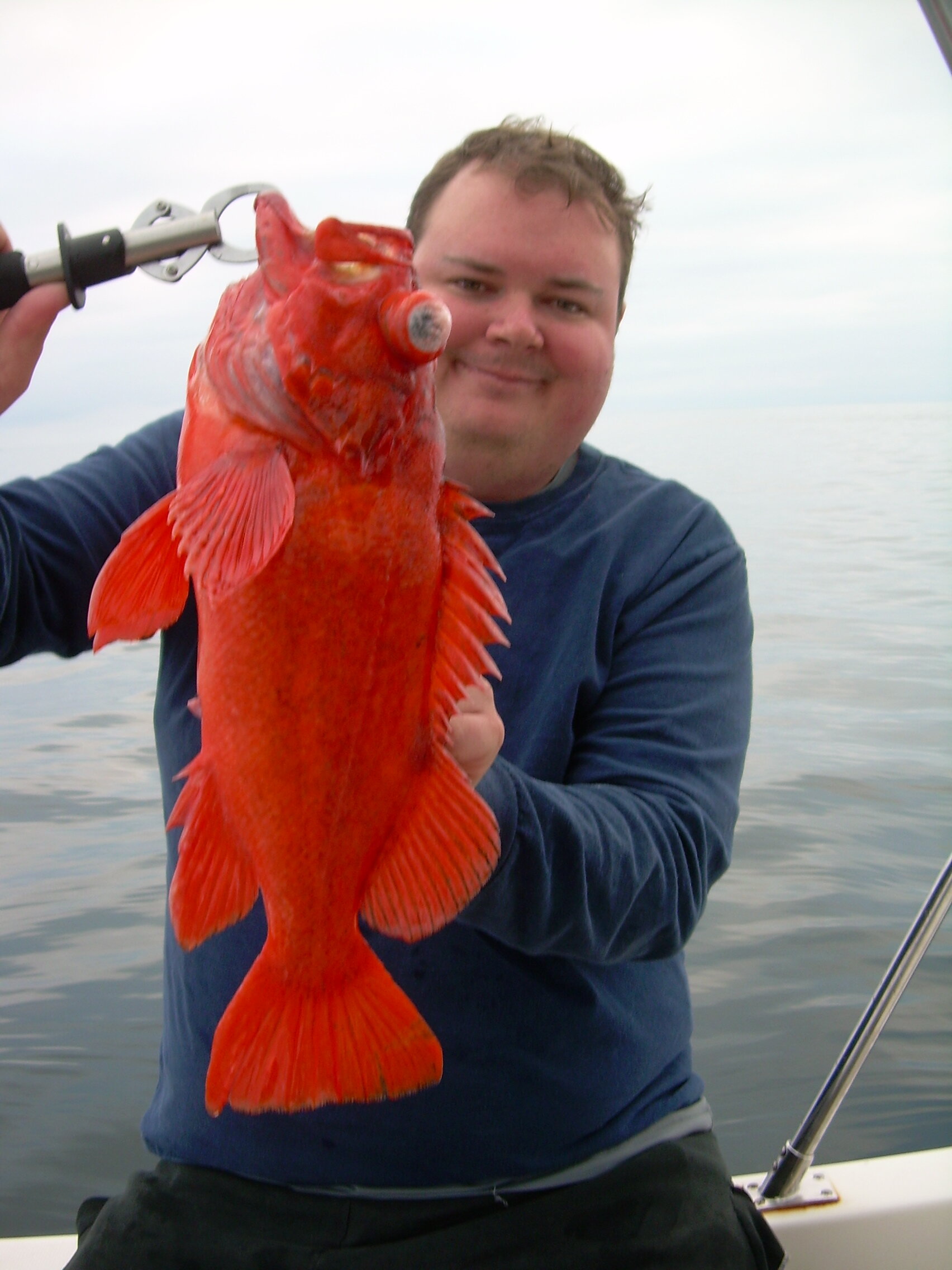 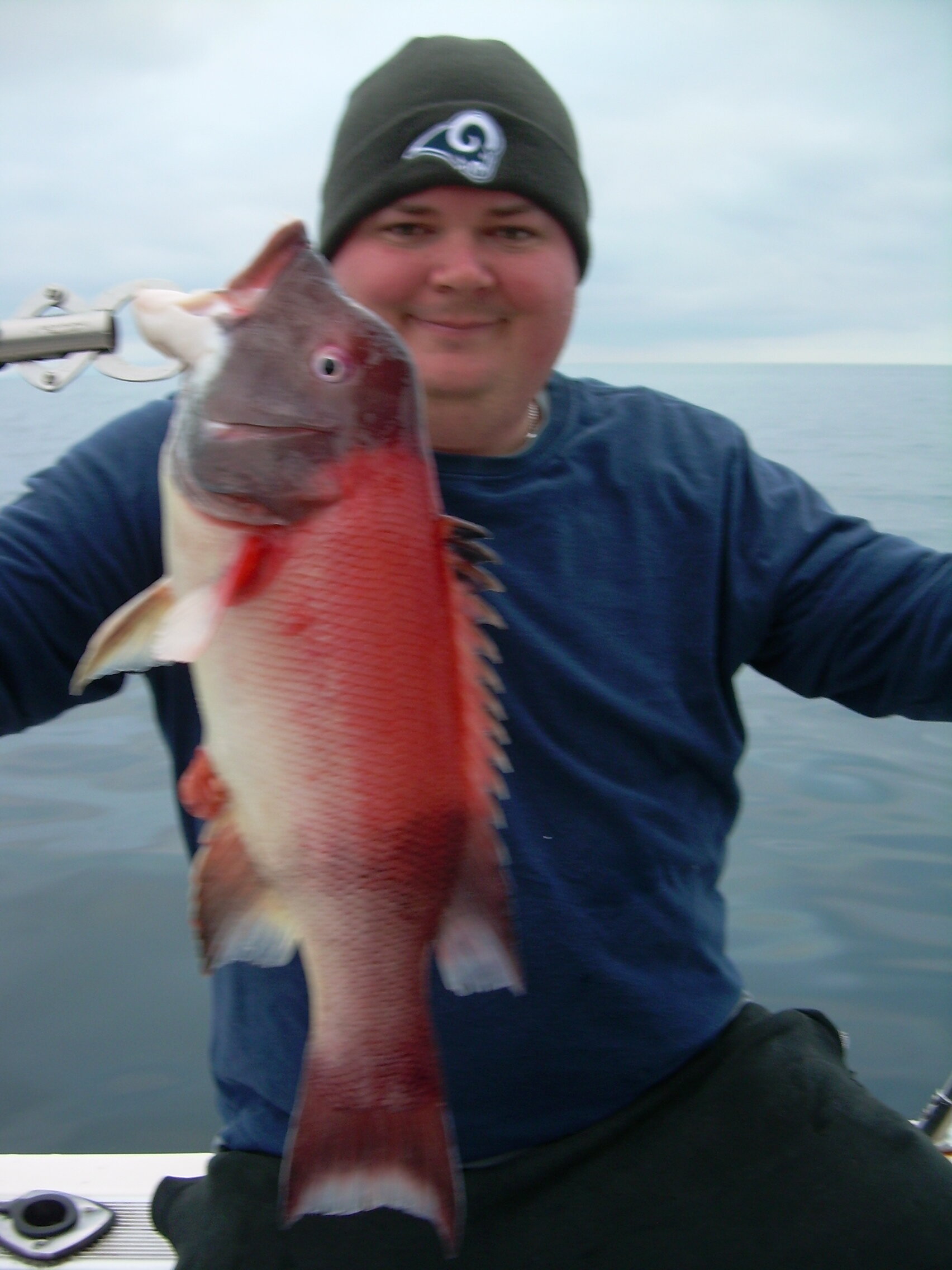 Glad you guys got out.
Glad you weren’t eaten by the tipsy dinos.
That red in the picture is really Red!!!!
Thanks for the adventure read.
Reactions: Tom123 and mhanson59hb
Upvote 0

Great report and pics, info too. Seems windy every day?
Can't imagine what's inside those costumes

I was looking at that photo and thinking what happens when one of them falls out of the boat?
Reactions: Tom123 and mhanson59hb
Upvote 0

makairaa said:
I was looking at that photo and thinking what happens when one of them falls out of the boat?
Click to expand...

Thanks for the report! Quality time with your boy, some great taco meat and you returned home safe.. Sounds like a successful trip to me!
Reactions: mhanson59hb
Upvote 0

You 2 always demonstrate a good level of Knowledge at Cat. I sure miss those moorings at two harbors, really good spot to start off up west, Thanks for the report!
Reactions: mhanson59hb
Upvote 0

Lots of good fish taco meat, right on!
Toggle signature
Thanks for your report. Hook up! Cory
Reactions: mhanson59hb
Upvote 0

Another awesome run. Well done and some nice eaters there. Too bad on the short Halibut. You’ll get em next time. And a great report (as usual).
Jeff
Reactions: mhanson59hb
Upvote 0
Show hidden low quality content
You must log in or register to reply here.