I took my son Sean to Catalina for a few days of hooping and fishing. We launched from Huntington Harbor Monday morning and picked up a scoop of nice sardines from Nacho. The ocean was flat glass, but about halfway across we hit a dense fog bank which caused us to slow down to 5 knots as visibility was less than 100 feet. Fortunately, the fog lifted after 2 miles and we were up to speed again.

We put out the rapalas at Long Point and headed east for no takers. Sean did manage a small calico on a swim bait and another on a stick bait. We tried some front and backside beaches for halibut, but only got one bite which did not stick for our efforts.

About 3 PM as we were headed to our hooping spot, we saw some birds working a big area off the east end and 3 other boats on them. As we motored over slowly, Sean put a small iron right in the middle of the school and gets slammed hard. Too bad a big sea lion took the fish and the jig. Next, I get hooked up on a fly-lined dine and land a 7-pound bonito. Nice, the big boys want to play, and they were fighting hard! For the next 30 minutes the bones were hitting everything that was thrown at or dragged by them. We kept 7 and released the rest, all from 5 to 7 pounds. Not bad for January!

With plenty to stuff the bait tubes with, we set up on our hooping spot with no one in sight. It was a calm night with almost no wind, and we managed 9 legals, 3 of which were the bigger models. Tired but happy, we spent the night at Hen Rock.

Tuesday morning found us trying more halibut spots for no love, so out went the trollers again. We picked away at a smaller grade of bonito (but still good size) for a few hours and decided to get a mooring in Avalon.

After lunch and a quick nap, it was back to our hooping spot. The DFW vessel “Swordfish” was on the prowl and their launch stopped 2 boats as we trolled by them for a few more released bones, but they didn’t even give us a look. We must have really needed a shower by then! They headed west, and we never saw them again.

That night was a tough crawl and we only managed 2 legals in a couple of hours, but one of them was the biggest bug of the trip. We called it a night early figuring there were plenty of bugs in the tank. Talking to the guys in the boat moored near us the next morning, it seems the crawl was just off - as they said they didn’t even get a short.

The ride back to the barn was glass again and this time there was no fog. All in all it was a fun trip with quality time spent with my son, big bonito providing some surface action, double digit bugs, decent weather, calm seas and we made it back to the dock in one piece. Water temps were consistently 60 to 61. Plenty of tails for the Super Bowl Lobster-Fest party at Dons!

Sean with a nice bonito 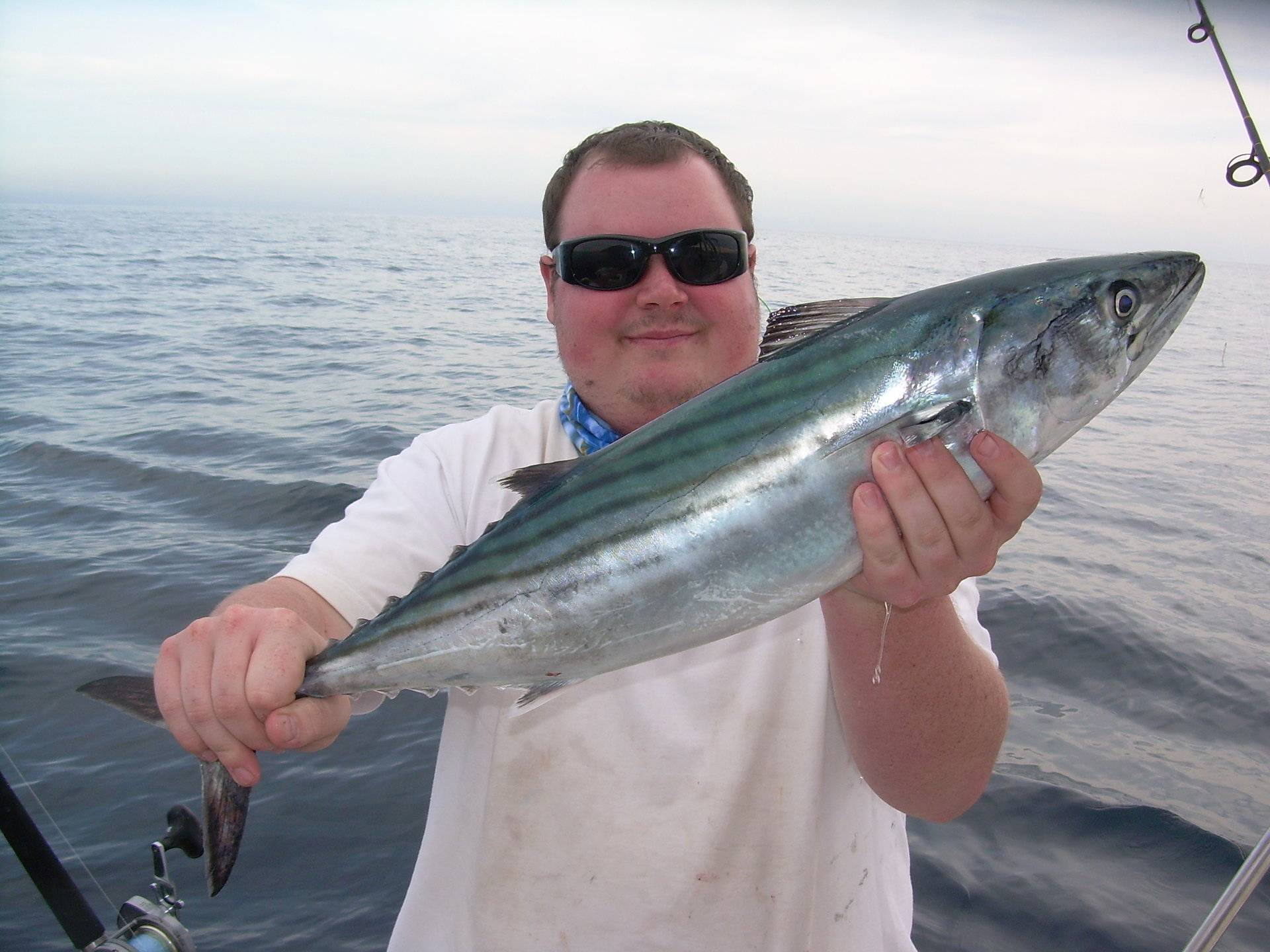 Does this lit up bone think he's a wahoo? Dig those vertical stripes! That lure has seen better days! 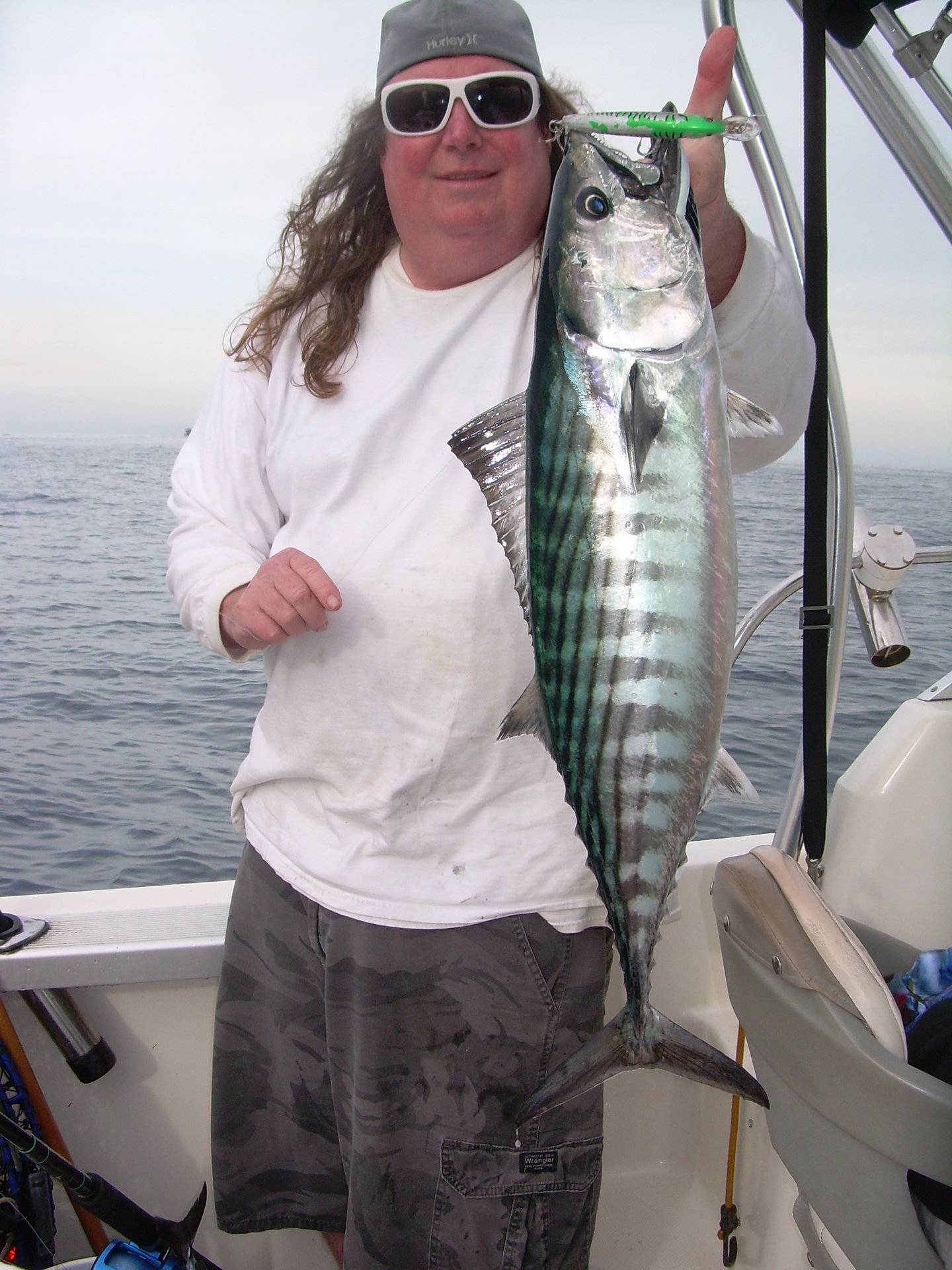 Dinner for lobsters, party of 7 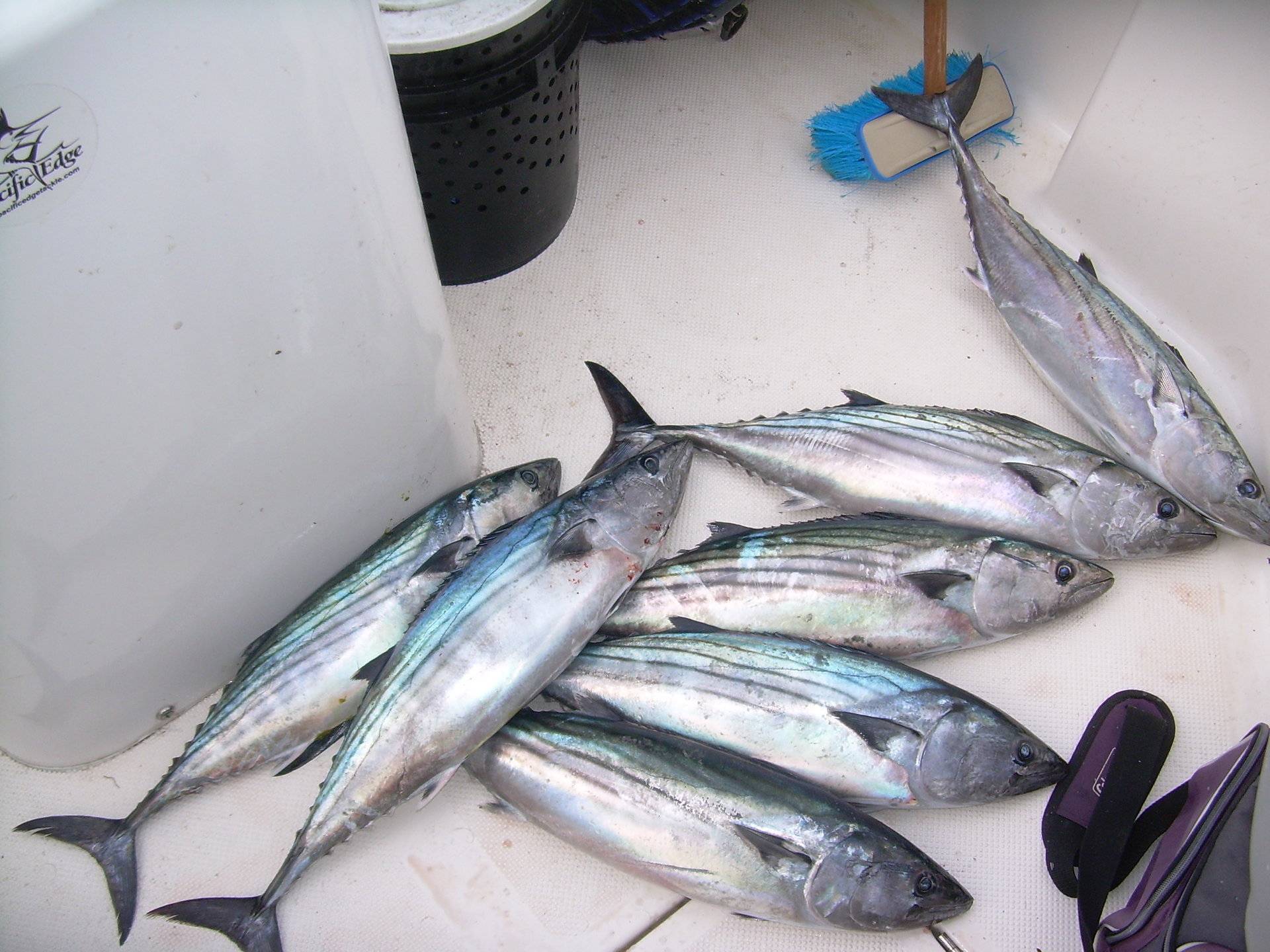 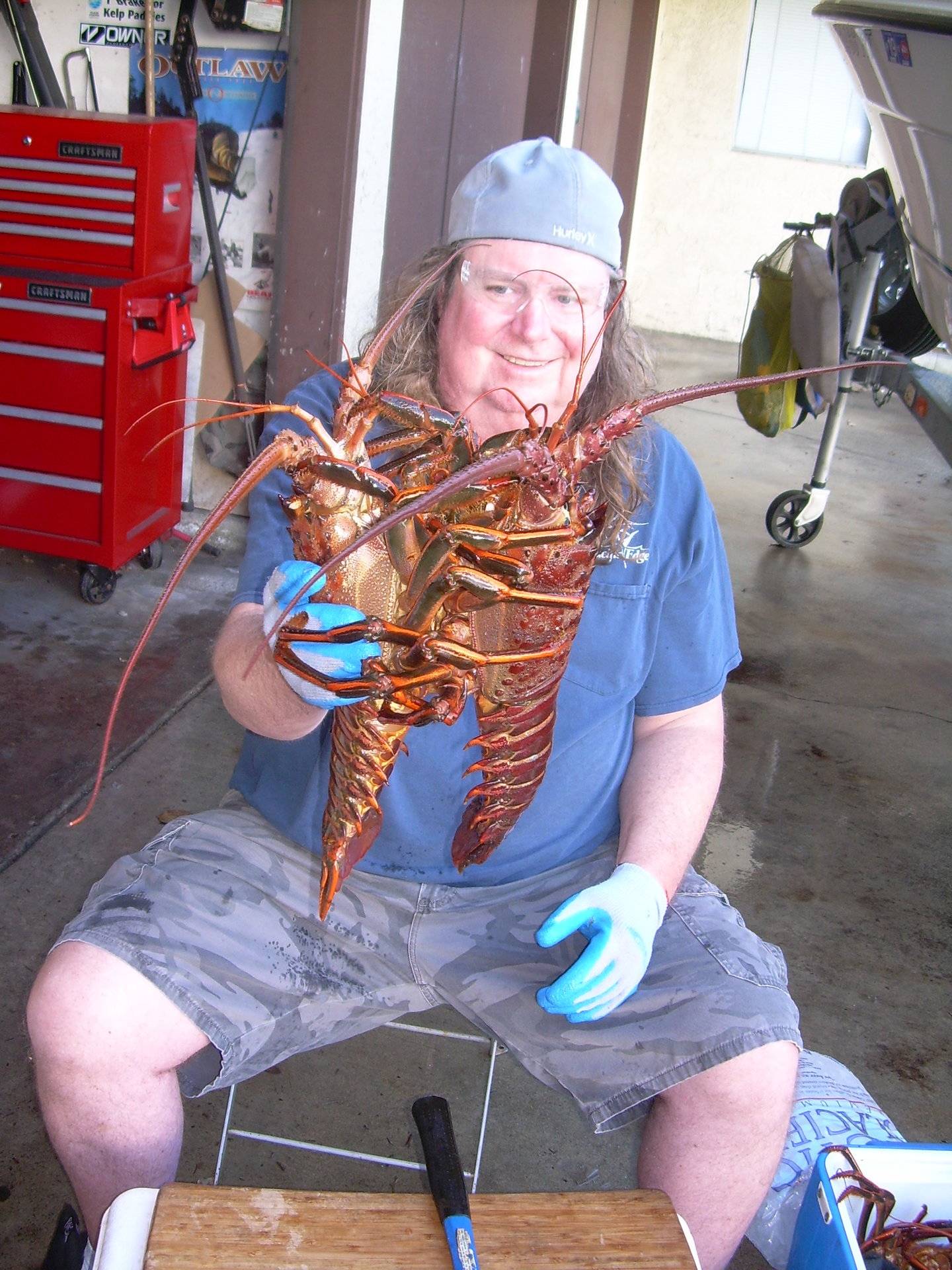 You guys are CONSISTENT!

Nice work out there, sounds like a fun trip!!

Thanks for posting the report.
Reactions: mhanson59hb
Upvote 0

If you bleed/gut them and ice them quickly, the filets are really good barbecued.
Toggle signature
Arima Sea Pacer 17
...

Great report and sounds like it was a fun trip. Good times at the Island and it's still January.
Jeff
Reactions: mhanson59hb
Upvote 0

Love those killer bones,,, reminds me of Redondo winter bones back in the day ....
Reactions: mulegemike, apogee and mhanson59hb
Upvote 0

You and your son look like brothers, I had to look twice to make sure the first guy (your son) didnt put a wig on and take a 2nd picture. Nice technique to fool DFW (kidding of course).

That bone your holding up has beautiful color and must have been fun to tug on. Years ago I caught a couple nice bones on a Sportie took em home to the BBQ and they were terrible tasting. After that I threw 100's back until I read a post here as to how to bleed and pack in ice. Last year I followed the instructions and it blew my mind how good it tasted raw.

Way to go Pops, nothing like a couple of nice days on the water with your son.
Reactions: RockyGizmo and mhanson59hb
Upvote 0

We set the majority of our hoops at 90 to 100 feet. We got no legals up shallower, and we never tried much deeper.
Toggle signature
Go ahead, make my day...

Love your two day reports in winter with your son, Kinison.

Not seeing it in the picture, When you first catch the Bones, yank on the bottom of the gill plate and the main artery and separate in order to bleed them out.
Last edited: Jan 18, 2018
Reactions: Hardcor and mhanson59hb
Upvote 0

the SLIDER said:
Love your two day reports in winter with your son, Kinison.

Not seeing it in the picture, When you first catch the Bones, yank on the bottom of the gill plate and the main artery and separate in order to bleed them out.
Click to expand...

Thanks! We were only using these for lobster bait, so we left them bloody as possible. If I ever get some I am going to eat, I will definitely follow your advice!

I always bleed any fish destined for the table, and now since I am seeing lots of posts saying properly taken care of bonito are good eating, I am going to try it one day!
Toggle signature
Go ahead, make my day...

Reactions: the SLIDER and Hardcor
Upvote 0

It doesn't get any better then having an adventure with your son. Those are really nice size bonito. The pictures of you and your son made my day.
Thanks for the report Mike
Toggle signature
The Killer in me is the Killer in you
Reactions: mhanson59hb
Upvote 0

Glad to see you found some quality time on
the water with your son.

Looks like a great trip with your boy! Nice work
Reactions: mhanson59hb
Upvote 0

Always enjoy your posts. Those bonito are great grade! Were you trolling x-rap 15 or 20?
Reactions: mhanson59hb
Upvote 0

The picture of the second bonito is just beautiful. That is a well lit up fish taken st the perfect moment

I agree with proper care bonito is excellent table fare. Sashimi or grilled

Give the bonito a try.
Reactions: Caseman and mhanson59hb
Upvote 0

Thank you for the detailed report. I enjoyed the read. Looks like you and your son had a great trip.
Reactions: mhanson59hb
Upvote 0

Nice going Mike! I sure do miss fishing with my Dad.
Reactions: Hardcor and mhanson59hb
Upvote 0

Ryan_J said:
Always enjoy your posts. Those bonito are great grade! Were you trolling x-rap 15 or 20?
Click to expand...

Thanks! We were trolling the X-Rap 5 and 10 in blue and green mackerel. Didn't seem to matter what was on the end of the line. We probably could have trolled a strip of tin foil on a hook and been bit.

We've had great luck lately for bones on the bright green X-Rap 5, as can be seen by the paint being mostly chewed off in the photo! You just have to troll them a bit slower due to the small lip.
Toggle signature
Go ahead, make my day...

Way to go, Mike! Love pulling on big bones with the iron jigs. Those bugs look like a Thanksgiving feast for 10. Wow!
Reactions: mhanson59hb
Upvote 0

That Rapala looks like it's proven. I love Bonito, my first Tuna over sixty years ago. 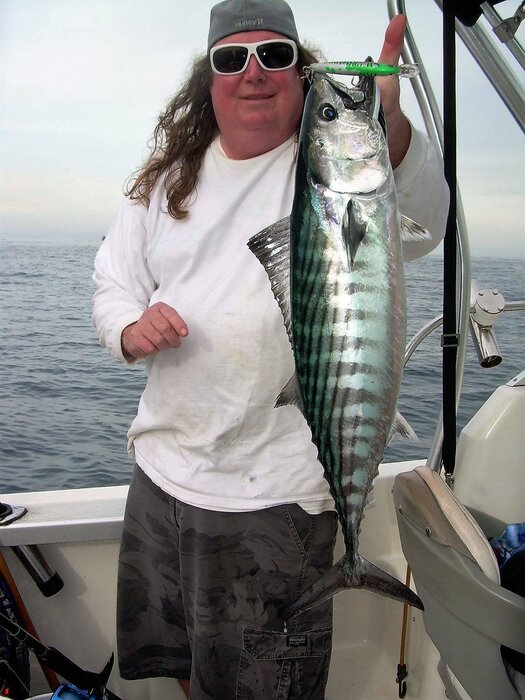 Toggle signature
The Killer in me is the Killer in you
Reactions: Microbait, repo805, longboard85 and 1 other person
Upvote 0

was there any squid when you went by nacho?
Reactions: mhanson59hb
Upvote 0

was there any squid when you went by nacho?
Click to expand...

Thanks! Unfortunately, Nacho was out of squid by Monday morning. He said he might be getting another load, but we didn't check on the way home Wednesday. There were some squid boats anchored up by Silver Canyon, but no one answered when I hailed them on channel 11. They were either sleeping, out of squid or just plain don't like guys with long hair.

Hardcor said:
That Rapala looks like it's proven. I love Bonito, my first Tuna over sixty years ago.
Click to expand...

Yes sir! Pretty much every one from So Cal's first tuna were bonito: they have started many fishing addictions. Glad to see they have been back for the past several years. Not that long ago, you couldn't find them anywhere!
Toggle signature
Go ahead, make my day...