Took off on the Aggressor out of Newport Landing on Saturday morning. Only (30) people on the boat. Looked like there where about (10) fishermen. Stoked on the light load, but I knew it was going to be dicey once we got to the Island. Weather was flat, glassy, black skies... mist and light rain mid channel... lightened up as we hit the Island.

As we got closer you could see the ring of boats already running around the East End and to the West from Avalon for as far as you could see. We stared right there in front of the cranes / quarry. Calicos and Barracuda started boiling immediately upon a few brailers going over the side. I caught (3) legal calicos on my first (3) casts. I look up the side and theres a gentleman on a little spinning outfit just pegged to the rail... he made one cast and hooked / landed a 30lb +/- White Seabass!! He said he had never been on a boat before, and caught it on a flylined sardine he picked up off the deck twice

. I proceeded to tell him Id been doin this for about 40 years and Ive never caught even a LEGAL WSB... and how rare his catch was. The ultimate example of Beginners Luck.

We proceeded to slay bass and barries for a while. Great bite, really fun. All the sudden I see my son swing and hes on on... he goes down the rail... deckhand in tow. Ends up he lands the only Yellowtail we would see for the day. A little rat... but he didnt care... thats the only goal he had for the day, and he fished hard and made it happen. I must be teaching the young Jedi well... hes starting to outfish his Pops. Ive never seen 25 other grown men so jealous before!

So I cured his "Yellow Fever" for another week. Now he says he wants the OTHER yellow... yellowfin! and he says hes ready. Next adventure coming shortly.

Once we moved from our first anchor, we were never truly able to find another good spot to pull into and set up. There was literally a boat tucked in around every corner. So we... in my opinion kinda just half assed it the rest of the day. Caught more calicos, barries, and rockfish, but we never got any more good sign of fish working. But it was a fun day... cool riders today... weather got crap-ola about mid channel on the way back... blowin like a mutha... but another good day... 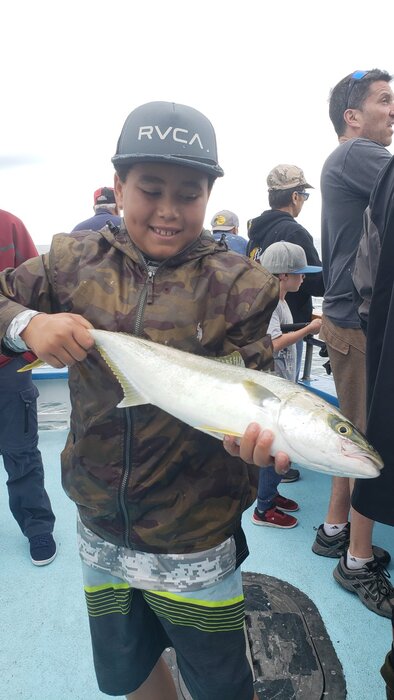 A rat is better then the yellow I didn't catch in 2+ days of fishing last week!

I didn't know the 5 second rule applied to bait flopping on the deck.
Kudos to the kid for his Yellow!
Toggle signature
Luck is where planning meets opportunity.
Reactions: Paddyman1 and clevel
Upvote 0
A

Some times luck is more important than all the skill and experience in the world.
Upvote 0

FloMar said:
I didn't know the 5 second rule applied to bait flopping on the deck.
Kudos to the kid for his Yellow!
Click to expand...

That rule applies only if you settled to eat the bait rather than casting it out!

Welcome to my no legal WSB (yet) club. I've been fishing salt for 45 years.
Reactions: mhanson59hb
Upvote 0
Show hidden low quality content
You must log in or register to reply here.