Been a while since I've had time to post a report but Saturday was to much fun not to.

A & B are 7 now (so crazy). We've done a ton of local halibut and bass fishing. They love it, are a pleasure on the boat not to mention they have gotten really good at it. They no longer require much help but we haven't done a "real" trip yet as I want to make sure they continue to love being on the boat and fishing.

With my mind made up they are now capable of a longer tip this summer I've been waiting for a break in sports (football, flag football, baseball, basketball, ju jitsu), Ali being out of town for the weekend, biting fish and a weather window to take my kids to do something more than just a local bass trip.

The stars finally aligned on Saturday. We planned on a run to Cat. I haven't fished the island in years so I was excited to go. I took my wife with us as well since she's only been the island to stay in Avalon not to mention she's a tremendous photographer and I thought she'd love the beauty of the island from a boat.

My good buddy Joe also came to help out.

We left the dock at 5:30 A.M. picked up a scoop of great deans and planned to run to Avalon and grab a scoop of squish from the Carnage to cover our bases. Great ride over and were baited up at by 7:30. I wasn't sure if we were going to fish the front or the back of the island but decided to at least look at the back since there was zero swell or wind. We came around the corner I metered a pile of yellows on the edge in 90' just past Church rock. We dropped jigs but nothing wanted to go.

There were fleets at Orange Rocks and Salta Verde.. I didn't want to mess with that so I slid into a spot at the V's that had great looking water, no boats at all and a good uphill and in current plus structure. I think my wife is enjoying it lol. The bass and barracuda fishing was retarded like normal. One thing to note both greatly preferred the deans over the squid.

Getting tail slapped by a Cuda LMAO After an hour and 100 or so fish with no exotics we pulled the hook. I set up on some structure on the shelf all alone in 90' of water hoping the yellow would come through.

Great current and once again the bass were at it. We couldn't get a bait in the water without picking one up. They were even eating fly lined dines in 90' of water.

By this time it was now noon and things were looking a little grim. My wife was getting a little bored (she been on the boat for a million good bass bites with the kids) and asked when we would start heading back. The only positive was a good tide for the afternoon. I decided to make a move around the front. There were a ton of boats spread from Avalon down to Seal Rocks so we avoided that area and kept heading up the front side looking for a spot with no boats and good current.


We finally found one and set the hook. We had 4 dogs on us instantly which was a pain. About 15 minutes after setting up we got the right bite after a few big calicos. The dogs were on us instantly. Dogs 1 - Us 0. 5 minutes later here comes bite #2. After a short fight the dogs got another one. Dogs 2 - Us 0. Such a bummer with the boys on the boat they were really upset.

Then a little stroke of luck. The Cuda's came through. We got a few legals and left them on the deck to feed the dogs. Finally bite number 3 happened. Fun fight on the 20#. We pulled on this one for about 10 minutes when it went into the anchor. I got it out of the anchor around the boat and the rod back in to Aiden's hands. The fish made another charge to the bow and wrapped the anchor again. I ran up un-wrapped it and got it back to the corner again for Aiden and here comes the dogs. We cut the cuda's into large sections and chucked them over one at time which let us land our first yellow of the day. Not a monster, not a rat. Aiden was literally squealing he was so happy.

Adien man with his first exotic. 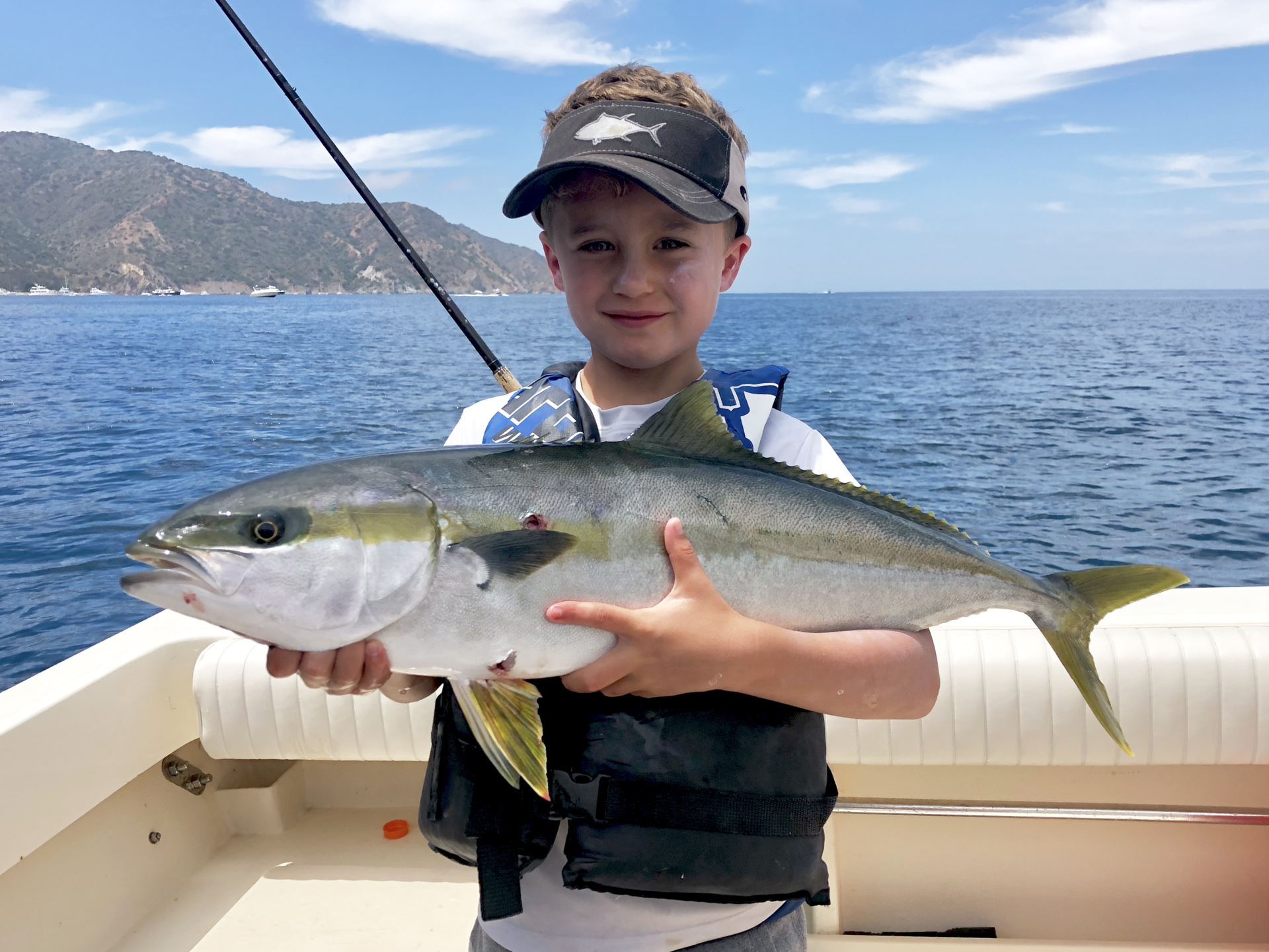 After boating that one lines back in and we were bit within 5 minutes on a much better fish. This one was a demon that took us around and around the boat. Much better grade.

We get it through the sea lions, around the anchor and here it comes to color. Joe gaffs it and somehow drops it off the gaff and into the water. Not to worry somehow it didn't break off. Joe gaffs it two more times and misses both and eventually breaks the line on his third butcher job. Brody was super bummed. We need to get him a fish. You can watch the

Lines back out and again we hook up almost instantly. Another good one and we chase him all over the boat around the anchor back and forth etc. etc. etc. We had to continue to throw either dead sardines or barracuda to keep the dogs off the fish. After 20 minutes a few trips around the anchor Brody puts a really nice one on the deck. Lines back out and we hook up within 5 minutes again. Another nice one. We let Joe pull on this guy since the boys both had a fish and he was so helpful with the kids all day. Same fire drill on 20lb and we put another nice yellow on the deck making us 3-6 in a few hours of fishing. 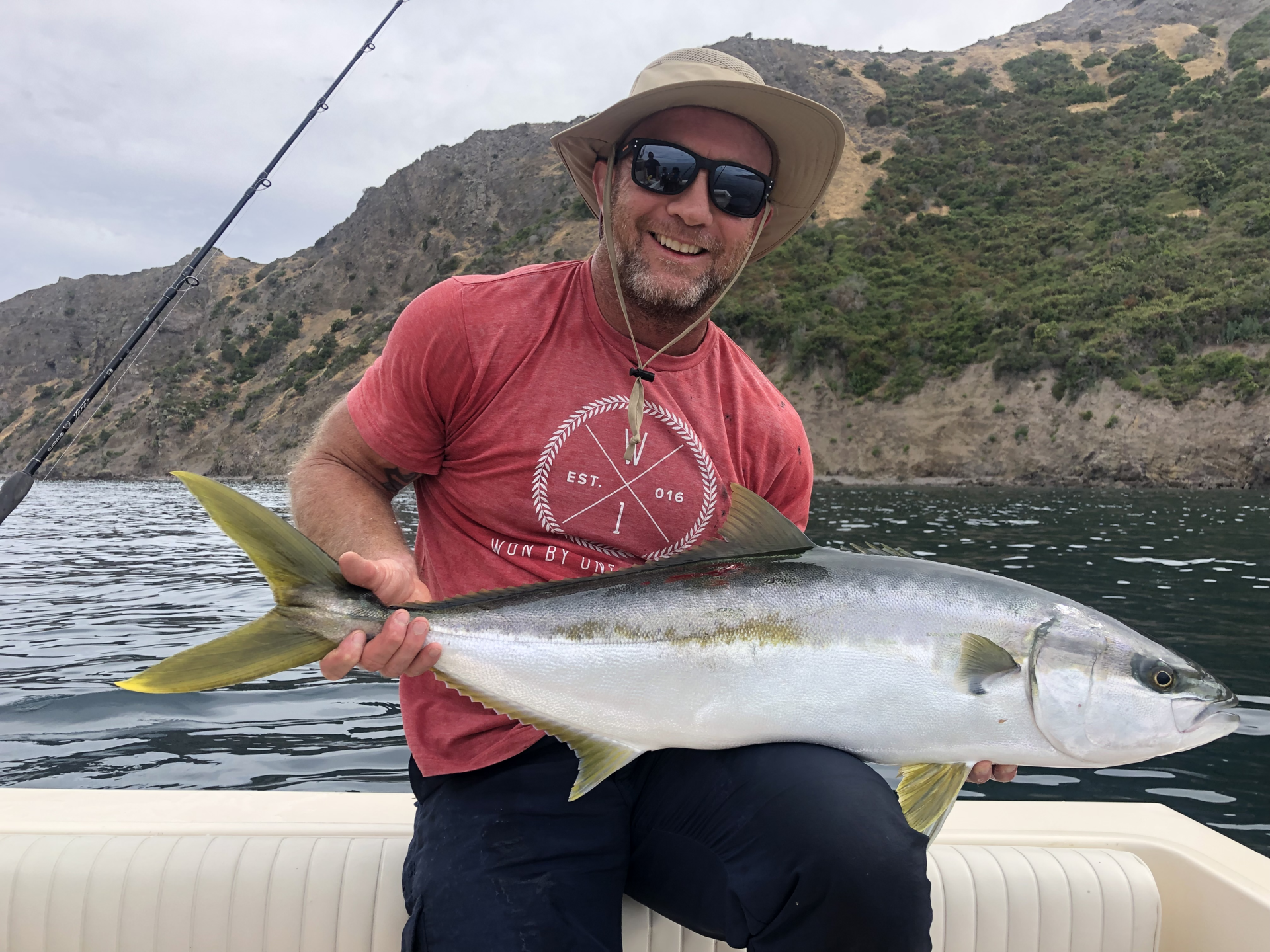 The kids looked like Zombies at this point so we pulled the hook with the fish still biting and headed for the barn around 4 PM.


They slept the entire ride home. The most fun and rewarding trip I've had in years. The kids were so happy, well behaved and enjoyed every second of it. I've been drying to do something like this with them but really wanted to wait until I thought they could pull it off and enjoy it. So happy I did. What an amazing family day.

We had a great YT dinner last night with their friends to celebrate. Great report and you are right, your wife took some great take pics.

The gaff Sh*t Show happens to us all.

But most don't have it on video. 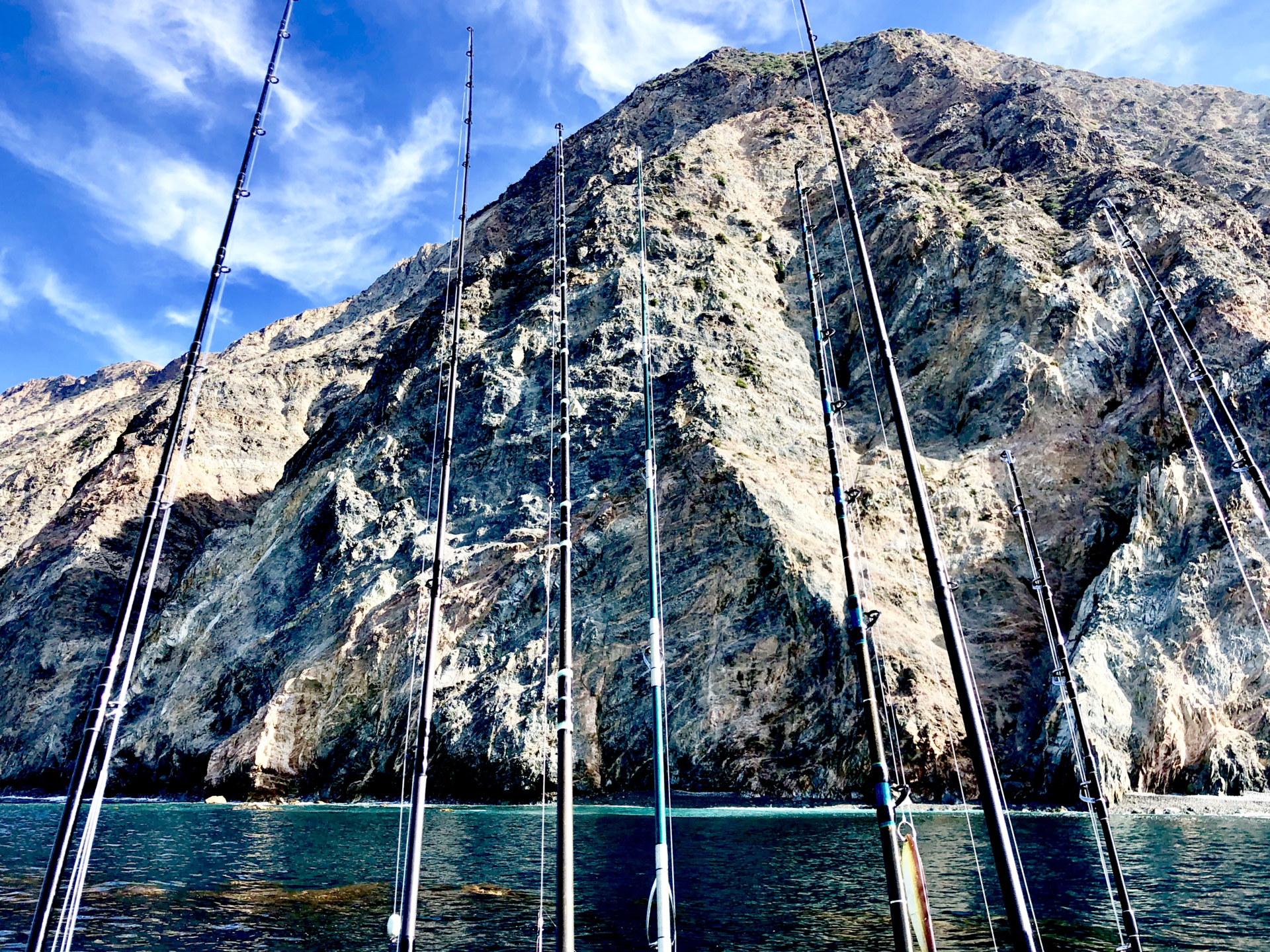 Toggle signature
Sometimes I wish i was a bird so I could fly over some people, and shit on their head.
Reactions: mandoman68 and Northeastfshman
Upvote 0

Awesome report! This is what its all about!
Reactions: Northeastfshman
Upvote 0

Great report, looks like awesome fishing with the family. Smiling wife, elated kids, happy friend, fish on the table, sounds like a trip of lifetime.
Also happy to see kids in life jackets.
Thanks for the report.
Reactions: Northeastfshman
Upvote 0

Now THAT is dedication: Using a kill bag for a pillow, dreaming about all the fish they are going to put in it!

I love these kinds of posts where the little guys and gals are getting there first or biggest fish. Way to go Dad and Mom!
Toggle signature
Go ahead, make my day...

Good times, but keep that guy away from the gaff at all cost on any future fish!

mhanson59hb said:
Now THAT is dedication: Using a kill bag for a pillow, dreaming about all the fish they are going to put in it!

I love these kinds of posts where the little guys and gals are getting there first or biggest fish. Way to go Dad and Mom!
Click to expand...

They are such great kids. Still 99% sure I'm not the dad but I'll take it. I enjoy any day on the boat with them regardless of what we are doing more than killing 200lb BFT. I know that sounds like BS but it's absolutely true.

Wu Tang is for the children!
Reactions: Shewillbemine
Upvote 0

Congrats on an awesome day. Having two young kids - I can totally relate. Love the video - especially the commentary from your wife.
Reactions: Northeastfshman
Upvote 0

Northeastfshman said:
They are such great kids. Still 99% sure I'm not the dad but I'll take it. I enjoy any day on the boat with them regardless of what we are doing more than killing 200lb BFT. I know that sounds like BS but it's absolutely true.
Click to expand...

It does not sound like BS, I get it. My son started fishing with me when he was 5. He is now going to be 25 in August and still loves to go fishing with me. Cherish every moment, they grow up so fast.
Toggle signature
Go ahead, make my day...

Great report! Even the kids realize it’s more fun to pose with a mossy than a slippery, snot stick.

So rad - kids are coming every trip now.

"Cut cuda into chunks" may want to edit that one.
Reactions: LEC
Upvote 0

Just a friendly reminder everyone.... never... never gaff away from you... Always go across the top of the fish.

Doing it this way, if for whatever reason you knock the fish, it stays in the water and you can still pull on the gaff and possibly sink the hook into the fish. (think about, the fish is trapped between the gaff hook and the boat, the only way it can get out of the water is by the gaff hook) If you go from "under" or away from you, you knock the fish farther away and possibly out of the water. (think shovel)

(with the exception of halibut in certain situations, but that's another story, you want that thing a couple inches under the water and laid out like a door mat, plus they do not typically "circle" like pelagics)
Last edited: Jul 1, 2019
Toggle signature

Looks like a great trip! Congrats to your little guy on his first YT. I'm sure both boys will be itching to go again soon
Toggle signature
Ed
Reactions: Northeastfshman
Upvote 0

Kids looked stoked and it's validated by end-of-day kaboom CRASH out like a light. Great job putting them on Cudas and Yellows, and capping it off with a great looking Yellowtail sashimi for dinner, and I bet it was even better tasting by the quality looking meat on the plate, great job and thank you for the long detailed report and great pictures.
Toggle signature
Luck is where planning meets opportunity.
Reactions: Northeastfshman
Upvote 0
Show hidden low quality content
You must log in or register to reply here.