Launched late out of CI Friday to facilitate my Dad (not an early riser) and my buddy who was just getting off of work at Ciscos. The morning started with my boat partner grabbing the gaff off the boat and throwing it inside my truck saying "we don't need this anymore". We had a second gaff on the boat anyway and I figured this was his way of getting rid of some potential strange karma associated with that particular gaff (which was the previous owners). Picked up Dad and my friend at the Ciscos dock and my Dad handed me a fantastic b-day gift; a new graphite Seeker gaff, SWEET! Fairly obvious at that point that everyone was in on it, nice!

Got a scoop of horse deans at Ciscos and made quick work of the crossing at 28 knots. Approaching Anacapa we made a right instead of a left, and slid into a nice looking spot in 90' away from the bulk of the fleet which was to our west. Proceeded to have a nice pick at smaller grade yellows (10-18 lbers), missing way too many with our giant deans. This was definitely the case where some smaller baits would have been more appropriate. 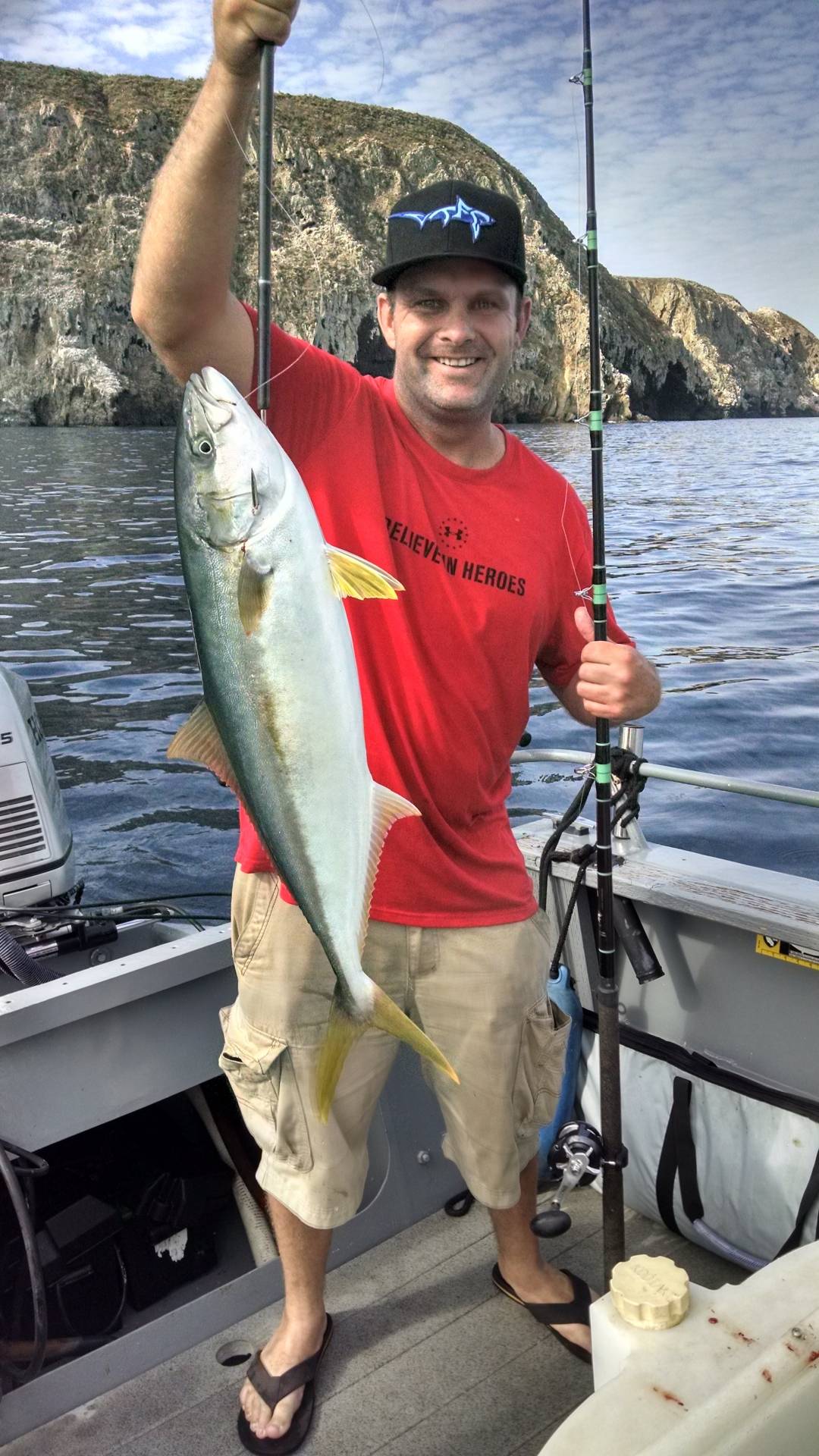 About an hour into our spot my Dad gets picked up and is immediately pinned to the rail. 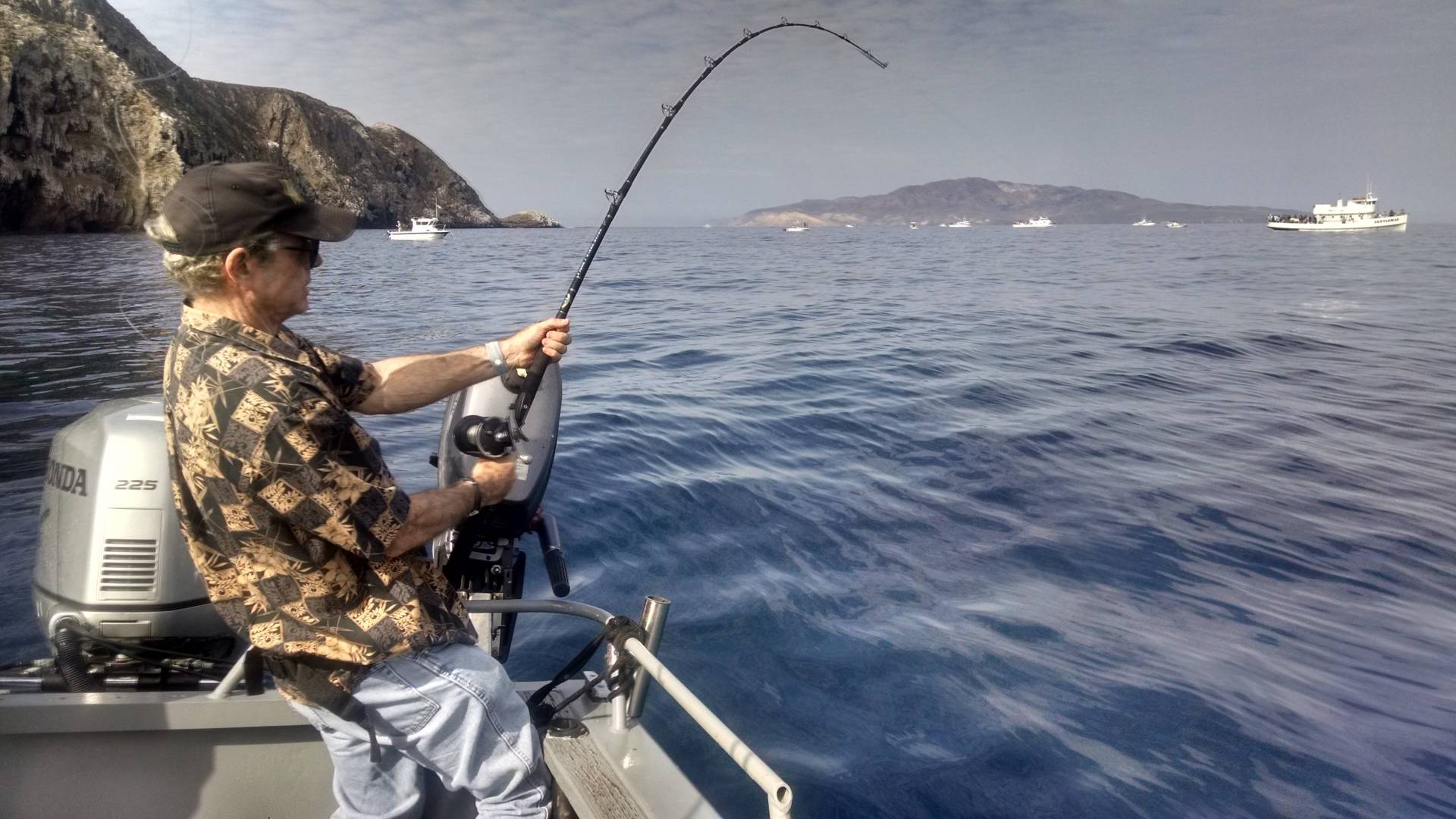 After 20 minutes of pain he quickly obliges when I ask him if he needs a break. Another 30 minutes later and everything I've got I managed to only gain about 20 yards. Every time I had the fish close to color it would peel off some seriously pinched drag on a Penn 555 with 40lb (pretty impressive). Dad is ready and rested and wants it back and I'm happy to hand it back (did I mention how f-ing hot and humid it was out there). 5 minutes into my Dad's second go the line goes slack....dammit.

Picked at a few more yellows and then it happens again; Dad is pinned to the rail once more. Same scenario with lots of helping Dad. 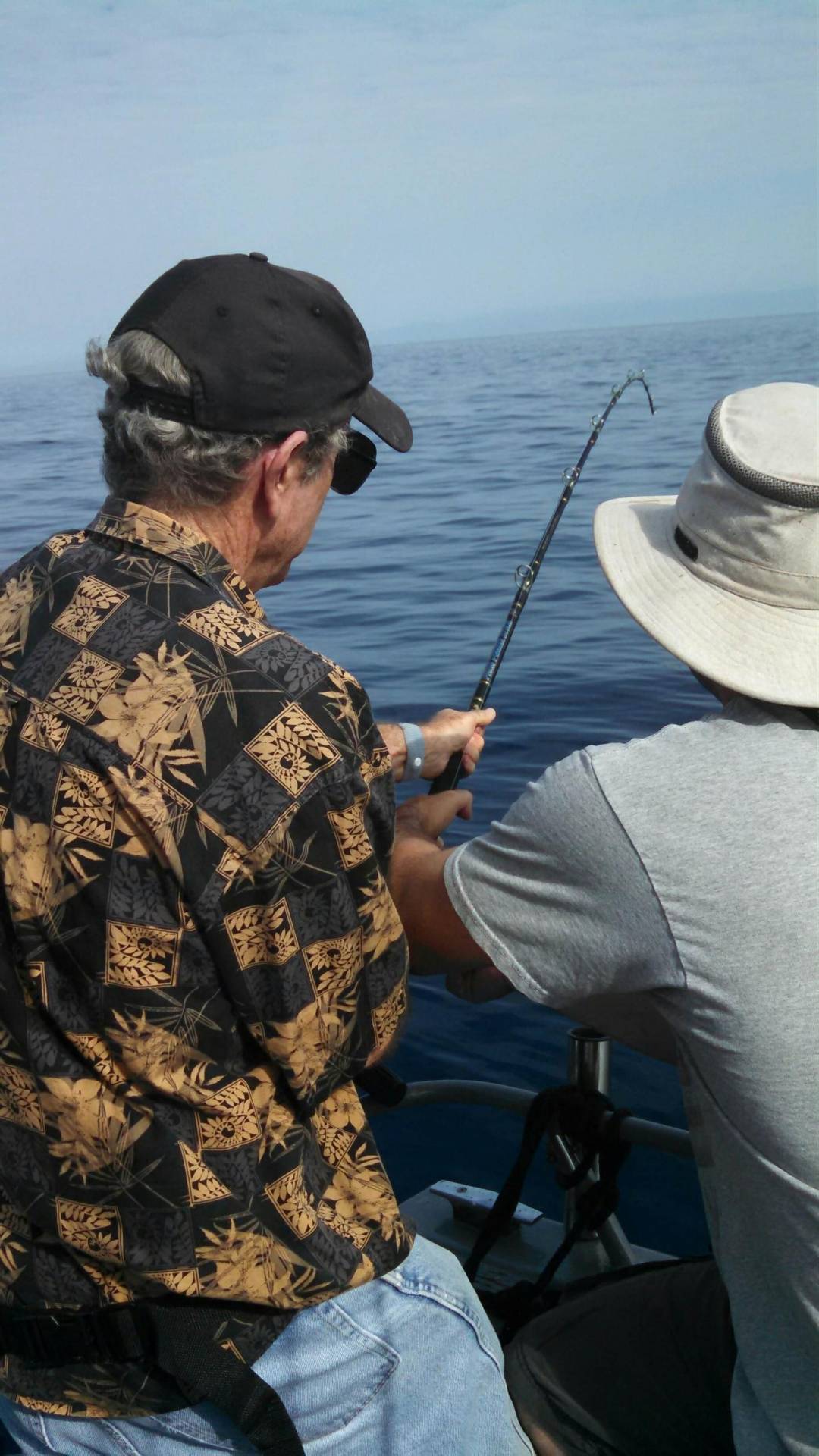 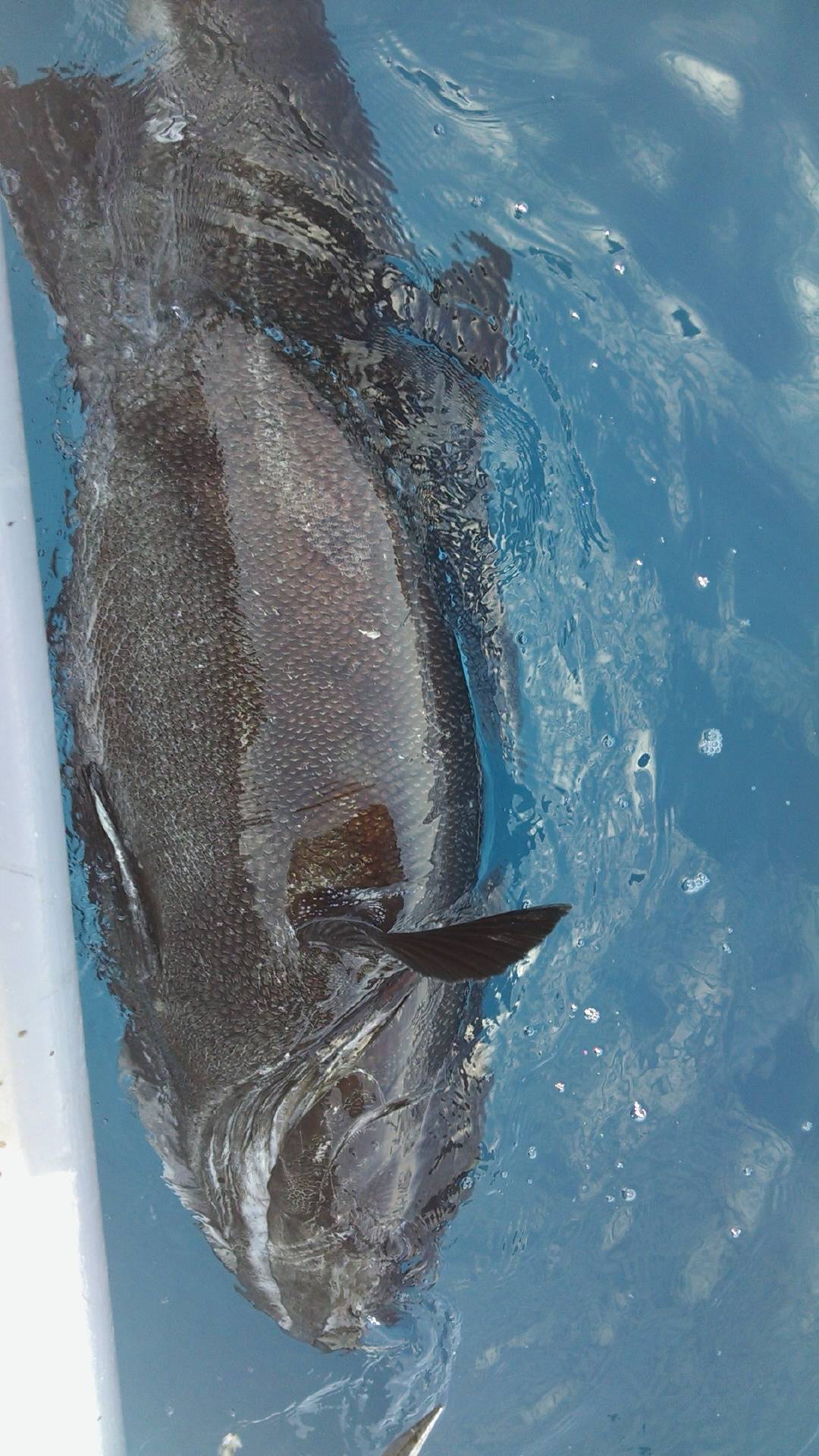 After a quick hook removal, getting her upright, and a well deserved minute later she kicks like hell back down to her haunt. Nice successful release. We were pretty stoked and the look on my Dad's face pretty much made the day for me.

Pretty darn obvious after that successful c & r that Dad's first fish was the bigger cousin of fish #2.
So two giant BSB in one day, pretty darn cool.

Awesome day with the "A team" and nice to put the crew on some solid, drag pulling fish. Definitely a great way to spend the b-day weekend.

One of Dane's yellows; 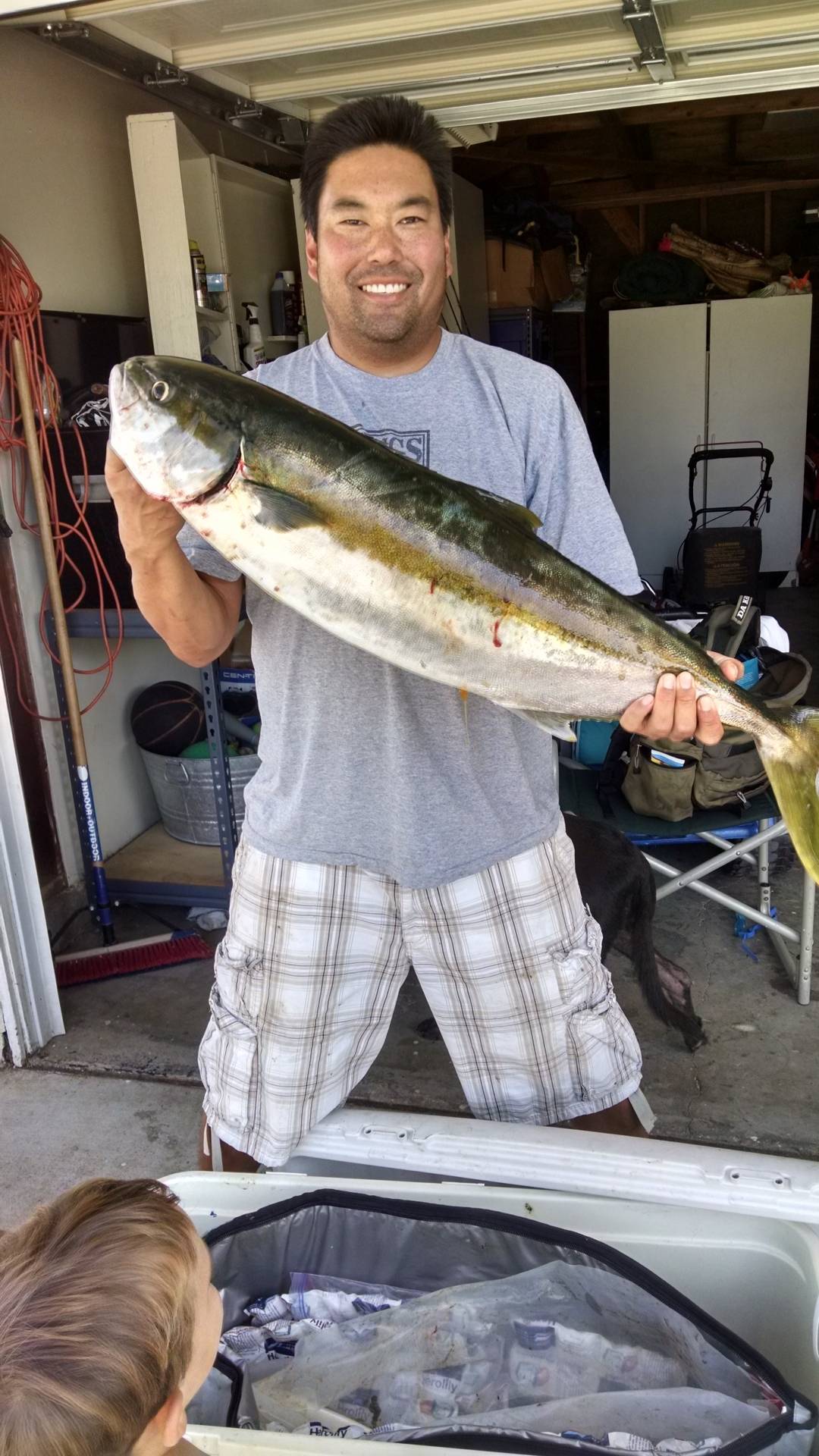 Poke salad, yellowtail rolls, and sesame ginger BBQ'd yellowtail getting ready to be consumed as I write this post. Life is good!
Last edited: Sep 12, 2015
Reactions: 13Bulldozer, jscott, slapazz and 4 others

Wow what a trip!! Sounds fun, glad you guys got into them!

That bsb is huge. My dad hooked into something like that at smugglers one time. Must have been a bsb.

Wow! That report is a carbon copy of our day today! Down to the first big BSB breaking us off and the second released boat side! Lots of BSB out there, had one on at the same spot last week, snapped off after 25 minutes. Saw a guy release one on the backside of Anacapa yesterday. Nice job!

Awsome! thanks for the write up.

Nice Job....Did you roll offshore on Saturday? I thought I saw your boat out there?

KNOT HOME said:
Nice Job....Did you roll offshore on Saturday? I thought I saw your boat out there?
Click to expand...

Nope, stayed on the inside and shot home early. Next trip out will likely be offshore, I'm getting the feeling our pelagic possibilities won't last too much longer as the GOA lows are starting to get active.
Show hidden low quality content
You must log in or register to reply here.
Share:
Facebook Twitter Reddit Pinterest Tumblr WhatsApp Email Link