I need your tips and recipes for canning YFT. Never have done it and we are going to this weekend. Any pointers would great. Thanks
T
Toggle signature

Mikey can help. See what I did there.
Toggle signature
I am the Hook in Grip-n-Hook
Reactions: I'M OFF
Upvote 0

I use a tablespoon of chicken broth and a sliced jalapeno in every jar.Great with Albacore.The Yellowfin is definitely fishier.Pressure cooked for an hour.
Reactions: I'M OFF
Upvote 0

I have been looking into canning as well. I am going to try it on the last of my tuna

This looked like good info. let me know how it goes
Reactions: I'M OFF
Upvote 0

10#s pressure once this is reached process for at least 100 to 110 minutes.The most important part is to keep where the jar meets the seal very clean or it will not seal properly.
Toggle signature
Better to do battle and lose than not to do battle at all
Reactions: I'M OFF
Upvote 0

I'M OFF said:
I need your tips and recipes for canning YFT. Never have done it and we are going to this weekend. Any pointers would great. Thanks
T
Click to expand...

for over 30 Years I've been doing 15 pounds for 90 Minutes
and have not had any problems
Reactions: copenhagenchild, Cubeye and I'M OFF
Upvote 0

One teaspoon of Brandy in each jar-domestic product will do no need for expensive stuff.
Upvote 0

Make sure you follow the directions in the manual. I use 10# of pressure for 100 minutes. DON'T OPEN THE TOP UNTIL IT HAS COMPLETELY COOLED DOWN. Biggest mistake people make. I've used all kinds of stuff when I can tuna. Olive oil, jalapeno's, salsa, you name it you can put it in the jar. Personally I have found that different types of salsa work the best, gives it a great flavor.
Toggle signature
Someone once told me that time was a predator that stalked us all our lives. But I rather believe that time is a companion who goes with us on the journey — reminds us to cherish every moment because they'll never come again. What we leave behind is not as important as how we've lived.
Upvote 0

Tommy definately look at the Giovanni's instructions. They are easy to follow and turn out great.
Reactions: I'M OFF
Upvote 0

You jinxed the shit out of your trip.

Toggle signature
"What is the MLPA anyway? They are the meanest people ever!"

one hour is not enough time, you may create a deadly poison, botulism.

90 minutes and ten pounds of pressure at a minimum at sea level and 15 pounds pressure higher than sea level at 90 minutes at a minimum. i do two hours and thirteen pounds and ball, the canning people, said i would never have any problems although it is overkill.

make sure EVERYTHING is clean, washed in hot water. jars, flat lids, screw caps, pressure cooker and components, any utensils you may use. i wash the jars, half pints or pints, NOTHING LARGER as there is no formula for it.
b
i barely boil water in a small saucepan and put the flat lids in the semi hot water as this softens up the rubber seal to seal the jar better.

after rinsing jars ( preferably wide mouth jars ), i fill the sink with hot water and let the jars sit in it and take them out one at a time and fill them to about one inch from the jar top ( head space ). i have put two medium jalapenos or three serrano chile peppers ( stems cut off ) in each jar or cloves of garlic, teaspoon whole peppercorns, very small amount of kosher salt, etc., whatever you like.

i put previously trimmed and cut fish into the jars and after filling each jar, wipe the rim with a dry paper towel so there is nothing to hinder the sealing of the jar. take the flat lid out of the hot water with tongs and place on top of the jar. put a screw cap on hand tight, don't crank it down real hard. place it in the cooker. i put water in the cooker while washing everything so it gets a good start and i don't have to wait as it'll take a while for the cooker to get up to steam, NOT ROARING BOILING, JUST HOT. the water level should be almost to the top of the jars. if you have a second layer, put the aluminum disk on top of the first layer. same if you have a third layer.

i put two tablespoons of white vinegar in the water in the cooker water as it helps to keep the jars clean while cooking.

put the canner lid on and turn the heat on high. once steam starts to come out of the top vent, wait about seven to ten minutes until you get a solid stream of steam to ventilate the air out of the cooker. put the vent device on after venting and watch the temp gauge and make sure there is no steam coming out on the sides of the canner. if there is steam coming out of the side, you will not be able to keep a solid pressure.

after cooking for ninety or more minutes, turn off the heat and let it sit until the temp drops to nothing. it is advised not to take the pressure thing off until the pressure drops and it is also advised not put the canner in cold water to speed things up.

what type and how large of a canner do you have ? presto, all american, or ?

i have been canning fish for over twenty years and when i was fishing, i would cut the fish into small fist size pieces, put them into ziploc bags and stack them in the freezer with paper towels between the bags so i didn't have a big frozen block of bags. usually starting around june when the tuna were running and i would start canning for four days on the four day thanksgiving holiday doing about four batches a day with two canners.

if the fish smells fishy, canning removes the smell and the canned fish tastes as good as the fresht caught fish.

i hope this helps. if you have any questions for me, send me a pm.

P.S. after you take the canner lid off or when you put the jars on the counter, you'll hear ping, ping, ping...that's the jars sealing. after the jars cool off, if you push on the lids in the middle, they should not give. if they do give, they did not seal. just put them in the fridge and enjoy. don't tighten down the screw cap hoping it reseals as it's not safe to do. just fridge it !

also, when you take the jars out of the canner, place them on a towel lined counter as if you put them on a cold counter, that may break the jars.

after all the jars are cool to the touch, i wash the sealed jars with soap and water with a scotch brite pad so there is no smell in my pantry. be careful if you do this as the flat lids are very sharp on the edges.

Thanks for all the info and tips and PM's!!!

Carl said:
You jinxed the shit out of your trip.

Carl, I already went. Don't jinx yourself and not get any fish

BAJA.DESERT.RAT said:
P.S. after you take the canner lid off or when you put the jars on the counter, you'll hear ping, ping, ping...that's the jars sealing.
Click to expand...

I love that sound!

FDA safe canning guidelines for non acidic foods (like tuna) are 110 minutes at not less than 10 psi, if it drops below 10 psi during processing, the clock starts again.

I'm just throwing it out there, there probably is a cushion built into their recommendation. Botulism poisoning is nothing to mess with.

And A.A. canners are the shit!
Reactions: I'M OFF and BAJA.DESERT.RAT
Upvote 0

mogambosquid said:
I love that sound!

FDA safe canning guidelines for non acidic foods (like tuna) are 110 minutes at not less than 10 psi, if it drops below 10 psi during processing, the clock starts again.

I'm just throwing it out there, there probably is a cushion built into their recommendation. Botulism poisoning is nothing to mess with.

And A.A. canners are the shit!
Click to expand...

yep I have one
Upvote 0

thank you for the heads up on the timing change. i'm still safe as i do two hours at 13 pounds here in los angeles, sea level.

Well it was a success!! 68 jars and ALL of them sealed. We did habanero, jalepēno, peppercorn w/salt, we got some infused oils like hickory smoked oil, garlic, fresh jalepeno, basil . Cant say which is best yet as we haven't tried em all. We ended up doing 12lbs for 100 minutes. Thanks for all your suggestions[emoji106] 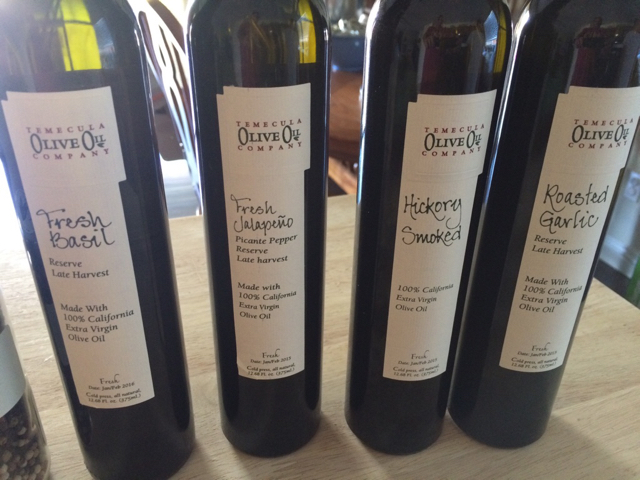 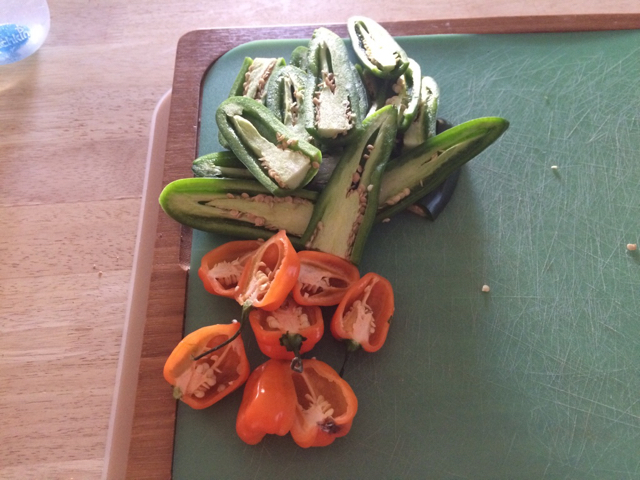 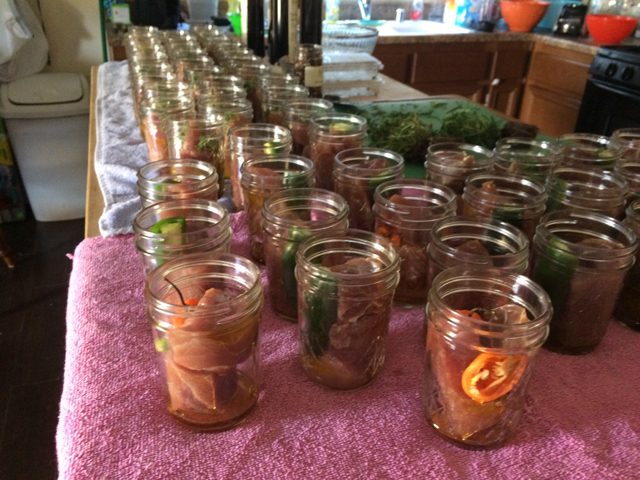 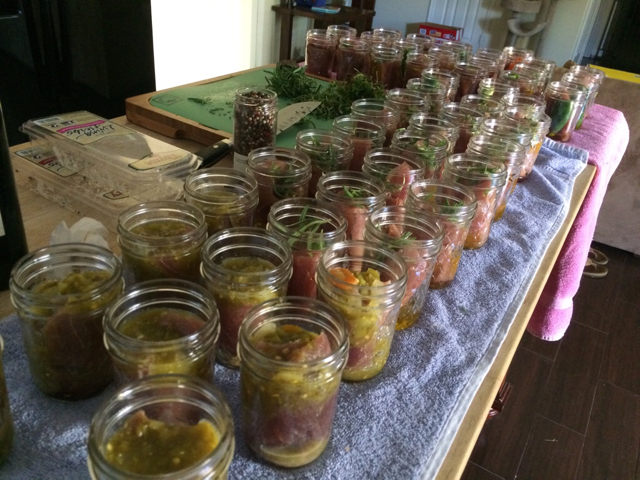 It was a blast. I can't wait to start eating all of them.
Reactions: I'M OFF
Upvote 0

Just ran 40 pints of YFT, have another 40 to go. 12-15 lbs for 90 minutes is what I can at. I rarely loose a jar. I do a lot of Jalapeño packed in water, olive oil, and some chicken broth lately. I have been canning for 25 years, and have ruined a lot of friends for store bought. RSW fish canned is awesome! One thing I use, that makes it easier. I fill a large crock pot with cut tuna, and it is exactly one pressure cooker worth. I use 2 Presto 23 quart cookers, and get about 20 pounds each in pint jars. I rarely if ever loose a jar, and have it down pretty good.

If you have never done it, get a friend with knowledge to help, or follow directions carefully. After a couple of runs, it will quite easy.
Reactions: Whalebreath, Mr GreenJeans and jer dog
Upvote 0
Show hidden low quality content
You must log in or register to reply here.

Anybody can their fish?