Different Mikey this time. Mike met me at the boat just before 5, pushed off and caught some akules (always good to have some wiggles in the mix). Just as an aside; the harbor looked like Ahi season, plenty boats, I guess maybe because during the week it was (you shoulda been here earlier in the week, how many times have we heard that) pretty good. Set our sites on the horizon and headed West.

Mike set the spread, I helped out some. Made a pass by CO and continued our trek, was surprised I didn't see more boats as I know most everyone had headed that way. Chatted with a slip neighbor that was out also, he had the same plan. Kai'Nana wanted to head more north so we let her slide more NNW, hadn't seen much of anything. Probably around 9AM see a critter lackadaisically porpoise out of the water, yell down to Mike and head Kai'Nana that way, less than 2 minutes, we get to hear that glorious/destructive sound of a #64 rubber band disintegrate in an instant (stbd flat) and the Penn 50/Okuma rod bend over in shear panic (that combo hadn't been hit like that in awhile). This fish had its Wheaties this morning, actually Ama-Ebi, she for sure dumped plenty of line. Mike got some lines cleared and got the gear on, I took the boat out of gear to finish clearing lines. The winds were SSE at 10-15, so there was some sea, Kai'Nana wasn't very pleasant at rest, her deep V/wide beam/heavy tower all made her heave way too much, so was forced to bump her in and out of gear sliding down sea. Finished clearing lines and readied the "killing field". 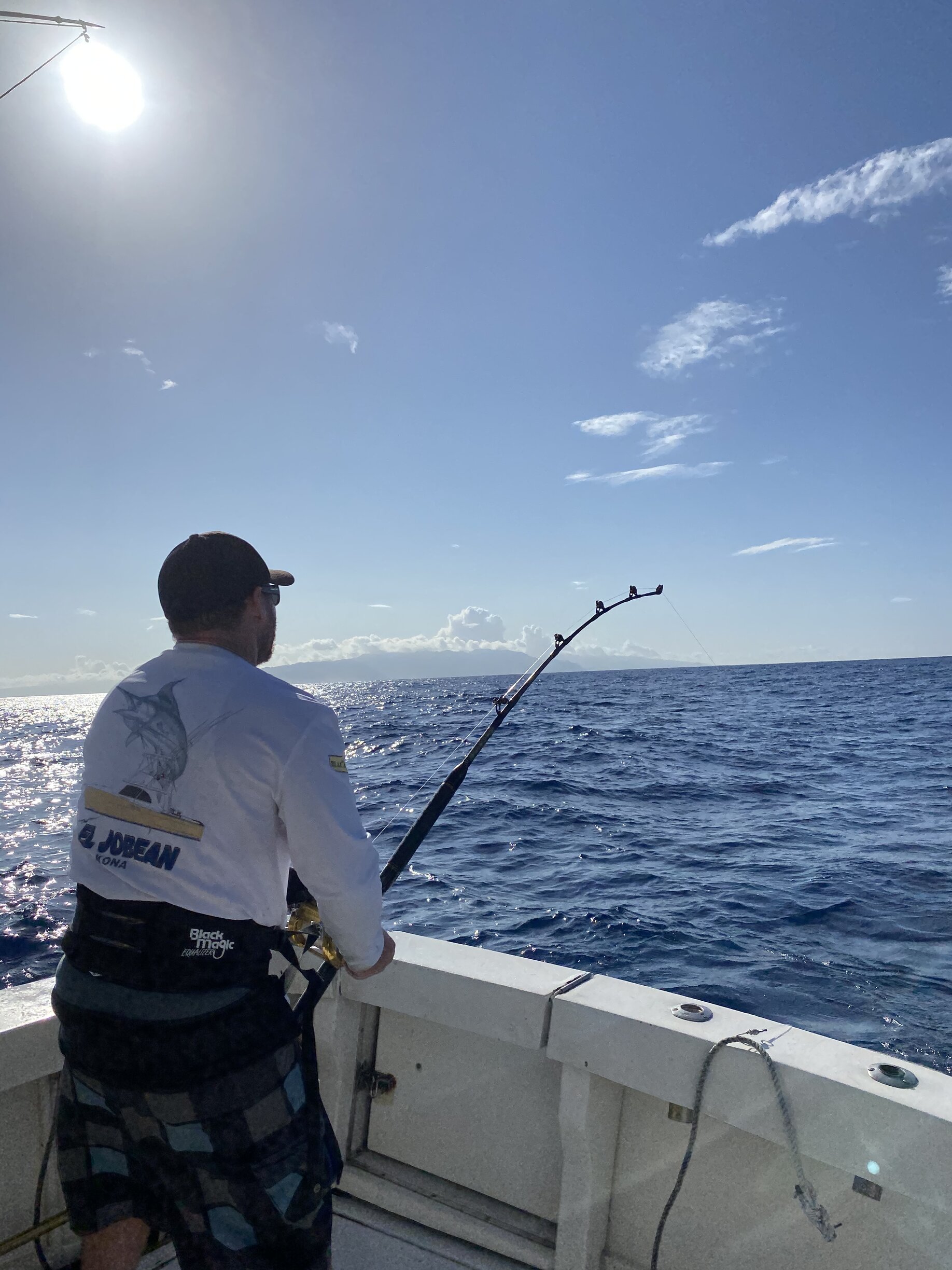 Mike gets our morning visitor boat side and we graciously invite her on board; the seas kept me bumping the Kai'Nana in and out of gear, the leader popped up quicker than I expected. Mike had already taken the clips off of the reel eyes, he set the rod in the holder and grabbed the leader, different than I thought it was supposed to work, but I got to the back of the boat a little late. Grabbed the gaff and stuck her, Mike followed with a second. Opened the door and slid her through. Chee!!! 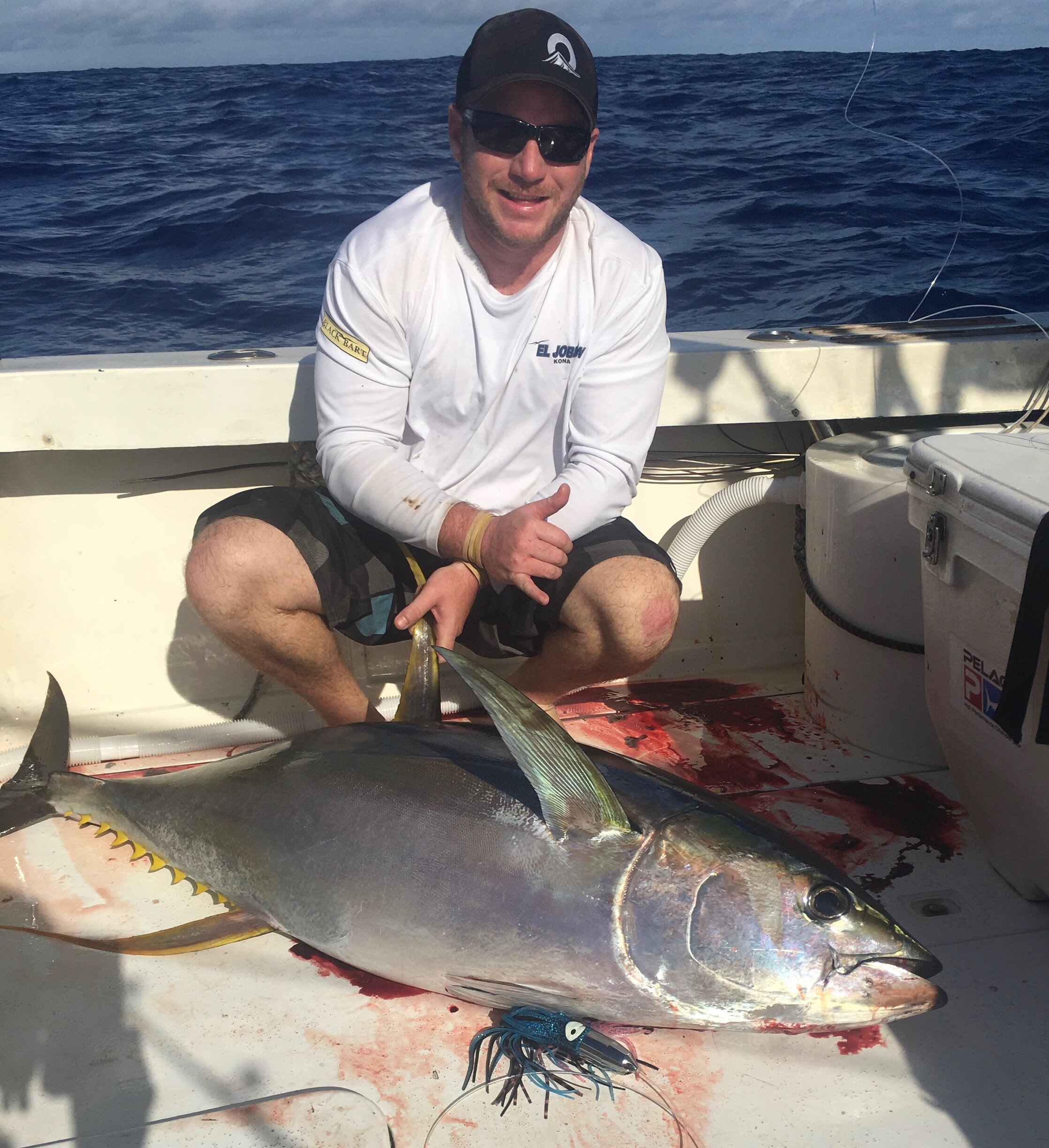 Cleaned up, reset set the spread and got our little friend buried deep in ice. As previously mentioned she was stuffed full of ama-ebi (shrimp), proof they are opportunistic feeders, there wasn't much room in that already distended belly. Stayed at it for the better part of the morning into early after noon, finally setting our sites on the "barn". Pulled in, cleaned up, cut the fish to share with family and friends. What did I say in ending last weeks report? 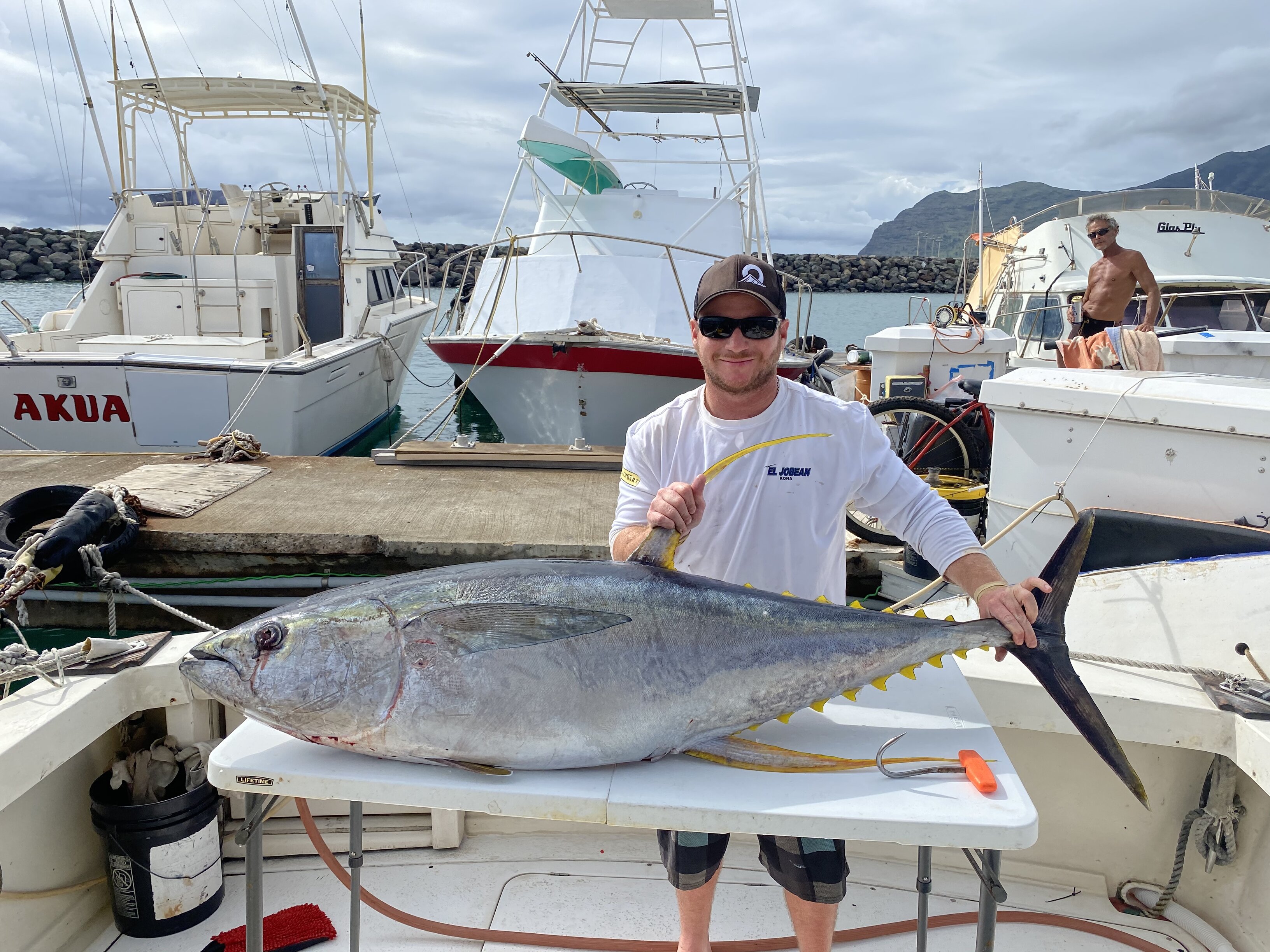 Here's to a "second to none" phenomenal season!!!

Translucent Ice blue/under skirt black on top light pink on bottom M90 (Tady knock off) from Hobbietat chrome jet. Her egg sack was extremely immature, plenty blood vessels couldn't even discern eggs; she had a ways to go before she's ready to pop.

Cheers
Pat
Reactions: kaze, I'M OFF, Truman and 8 others

Pat and Mike,
Congrats on a great looking YFT! Making me want to come to Waianae earlier this year!

Pat and Mike, good team work getting her aboard in those conditions. Nice follow up to the pair of Nintendos

russell kato said:
Pat and Mike,
Congrats on a great looking YFT! Making me want to come to Waianae earlier this year!
Click to expand...

Thanks John, this one was lucky for sure.

shadzdad said:
Pat and Mike, good team work getting her aboard in those conditions. Nice follow up to the pair of Nintendos
Click to expand...

Thanks Darren. You need to get bloody.

Thanks Dude, I hear, lucky we still get to play and lucky to pull that one out of the hat. 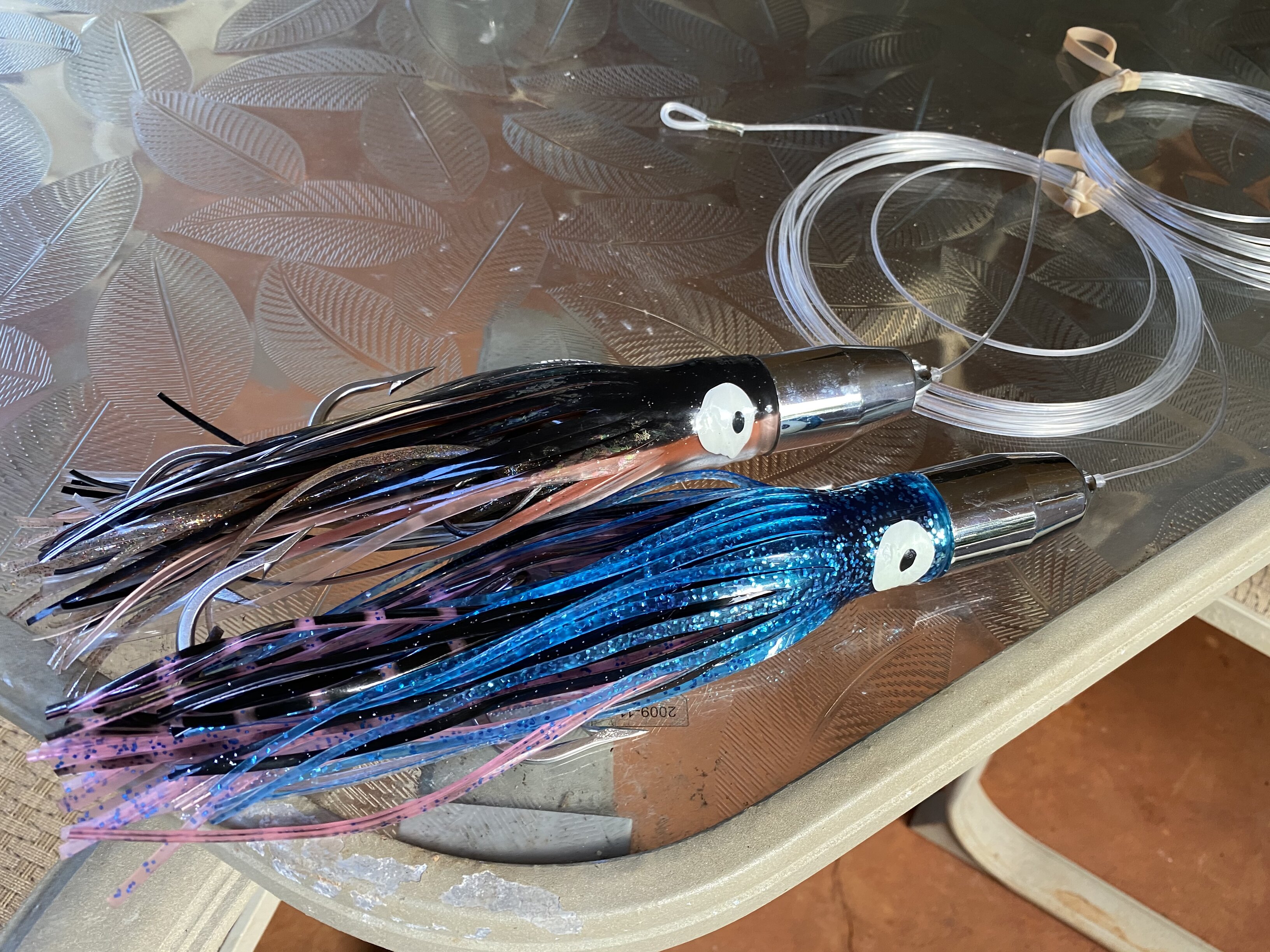 Always flat in close, the blue one got bit, black salmon got bit last week (marlin). Kai'Nana's 12' beam provides lure flexibility for sure.

Way to practice social distancing and as always Kai Nana doesn't disappoint. Way to give the rest of us the "fever", and it's not the covid-19 type.

AKEMI TOO said:
Way to practice social distancing and as always Kai Nana doesn't disappoint. Way to give the rest of us the "fever", and it's not the covid-19 type.
Click to expand...

Thanks Steven, there's already been a couple flurries of bites that have happened hope it continues.

shbite said:
Nice job Pat might get to out of your harbor on SAturdau
Click to expand...

Hope to see you out there Steve. Thanks.