Got an invite to join a Bongos 6 pack a month ago and have been eagerly waiting for the outing especially seeing that the tuna moved north well into U.S. waters. With some last minute cancellations, I was able to extend the invite to my good fishing buddy @Benny Mora. Due to some poor communication on our part only 4 of us were fishing on the six pack.

Met the group at Davies Locker in Newport Beach at 5am. There were four of us along with Captain Mike and Deckhand Travis. Two of us were extremely green with very little fishing experience (no experience offshore fishing for bluefin) with me and Benny being a little more seasoned.

I was following Bongos fishing reports the week leading up to the day and was very happy with what I was seeing. They were doing well in the Bluefin and I was hoping we could duplicate good performance put some nice Bluefin on the boat.

Got loaded up and Mike introduced himself and Travis, and we discussed the plan for the day. Thankfully Mike reminded the two less experienced in the group make sure they had their licenses and wouldn't you know it they forgot to get them. Mike and Travis were patient while the two ran up to Davey's Locker and purchased their licenses for the day.

20 minutes later we are off to the bait barge picking up some halfway decent dines for the day. The plan was to head out to fish San Clemente for the morning bite then go look around offshore in the early afternoon. Mike told us it was a serious possibility that we could find fish on the way to San Clemente Island and that the plan could change if we could find any biters. Mike also shared he found a secret weapon that were making these Bluefin bite. I swore on my life that I would not share what that secret weapon is, all I can tell you is that it is a popper.

The conditions on the water were simply beautiful. Almost no wind in the morning, and very little bump on the water. Water temps were about 71 with the morning overcast not burning off until about noon or so.

About halfway between Catalina and San Clemente Island we started seeing the ocean come alive. First it was one bird, then it was three, then it was five, and then we came across a pretty nice size kelp with a couple of birds on it. It looked fishy enough to flyline a couple of baits to see if the paddy was holding. We spent about 5 minutes on the paddy for nada before getting back on track and heading towards Island.

Seconds later Travis pops up and points to the horizon and says Boilers!! I looked up and could see something way far out on the horizon and wondered how he could see tuna from that far away. Sure enough we got a little bit closer and they were boiling tuna. They sunk out rather quickly so we kept to the plan and pointed the bow back towards San Clemente Island.

Some time later, we get to the island and start fishing for yellowtail. All I can say is that the sea lions were relentless. Couldn't barely get a sardine past them even after moving to a new spot. We caught a handful of Calico Bass which made the newbies very happy.

With the sea lions bullying us and the fish at our second spot, Captain Mike got with Bongos II and his other code group and found nobody was doing that well at that time at the island. Captain Mike said we need to stop wasting our time at the island and go waste some time somewhere where we had a better opportunity to catch fish and put meat on the deck. We reel the lines in and start tying up for offshore bluefin fishing. Travis took care of all the rods and tying up.

As a side note Benny and I did not bring our own gear and instead relied on the boat gear. It made me a little apprehensive not to have my own gear, but that went away as soon as I saw the quality gear that Bongos had for us. It made it so nice not to have to worry about carrying gear from the car to the landing or having to clean the gear after the trip. If you book a trip with Bongos, have confidence that you're in good hands using their gear.

About half way between San Clemente Island and Catalina, roughly at the same spot where we saw fish that morning, we see some pretty good spots of schoolie grade tuna boiling. Within minutes there were about three or four other boats on those same boils. Mike put us right within casting range of the boils, Travis gets on the bow and throws a popper into the boil, and we are bit on the first cast. Travis immediately hands the rod off to one of the newbies and he is on cloud nine pulling on the biggest fish he has ever pulled on. Benny and I have caught plenty of tuna so it was really great to see the stoke on someone's face who has never caught a tuna before. Captain Mike throws the second, very similar popper, into the boil and he is bit on his first cast. Mike hands that rod off the second newbie. The fish popped off a few moments later. Even though she lost the fish she was super excited to feel the tug. The first tuna came to gaff and the skunk was off. Lots of hoots and hollers as well as a bunch of high fives and we were off running and gunning with the other boats in the area. I believe we might have made another cast into the boil with the same poppers and got bit but the fish came off rather quickly. I can't remember exactly but I think we've got two fish on the deck from that school.

With all the chaos the fish were getting ran over by other boats and even though we were catching fish, Mike said this is not his favorite way of fishing and said he wanted to leave this group of boats to go find boils that we could have to our self...so we did just that.

Mike and Travis got on top in the tuna tower (stayed there almost all day) which gave us a huge advantage for locating schools of tuna. Less than 20 minutes later we find another nice size spot of boiling tuna that we would fish all by ourselves for the next couple of hours.

We get back on the program with Travis throwing the popper and handing off fish. Almost every time he threw the popper, it would get bit and we would focus on putting that fish in the boat. We got some and we lost some, and every time we put one on the deck we would repeat the same process.

Eventually we had 5 or 6 tuna on ice and everyone knew we were going home with fresh fish. Most of those fish were put on the deck by the newbies with a less than 50% hook to gaff rate. Needless to say the newbies were so worn out that Benny and I had the opportunity to pull on some tuna from that point forward. That's when Mike and Travis let Benny and me get on the bow and throw the popper. It was such a great experience for Benny and I. In no time we hit the "client limit" of 8 fish on ice. Mike and Travis were so patient and helpful with Benny and I which made our day.

After limiting, we got one more for the crew and left them biting after Mike called in his code group. We sat a bit away and cheered on the other boats as they caught a few from that school. What a wonderful way to end the day of fishing.

All I can say is that Captain Mikey and Travis where on their A game. They were so engaging, friendly, polite, knowledgeable, patient, considerate, and fun to fish with. I strongly recommend them to anyone who wants to fish out of Newport with a crew who really knows what they are doing. I can also tell you that the popper they were using was literally getting bit on almost every single cast. I have never seen anything like that even though I have fished many boils of bluefin tuna.

Bongos simply has it dialed in. Do yourself a favor and fish with these guys if you have an opportunity to.

I'm gonna post more pics later, but I wanted to get a report out sooner than later. 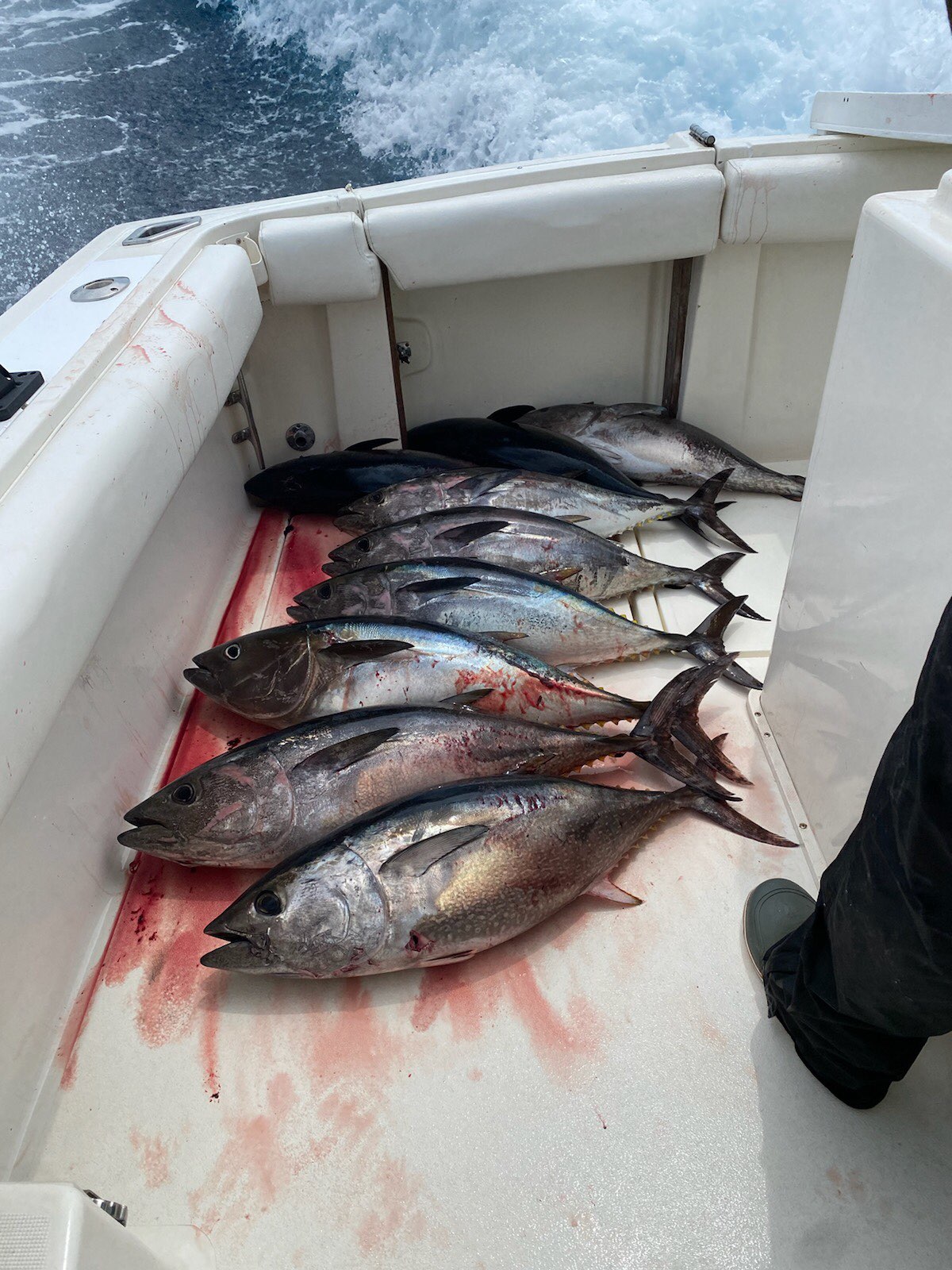 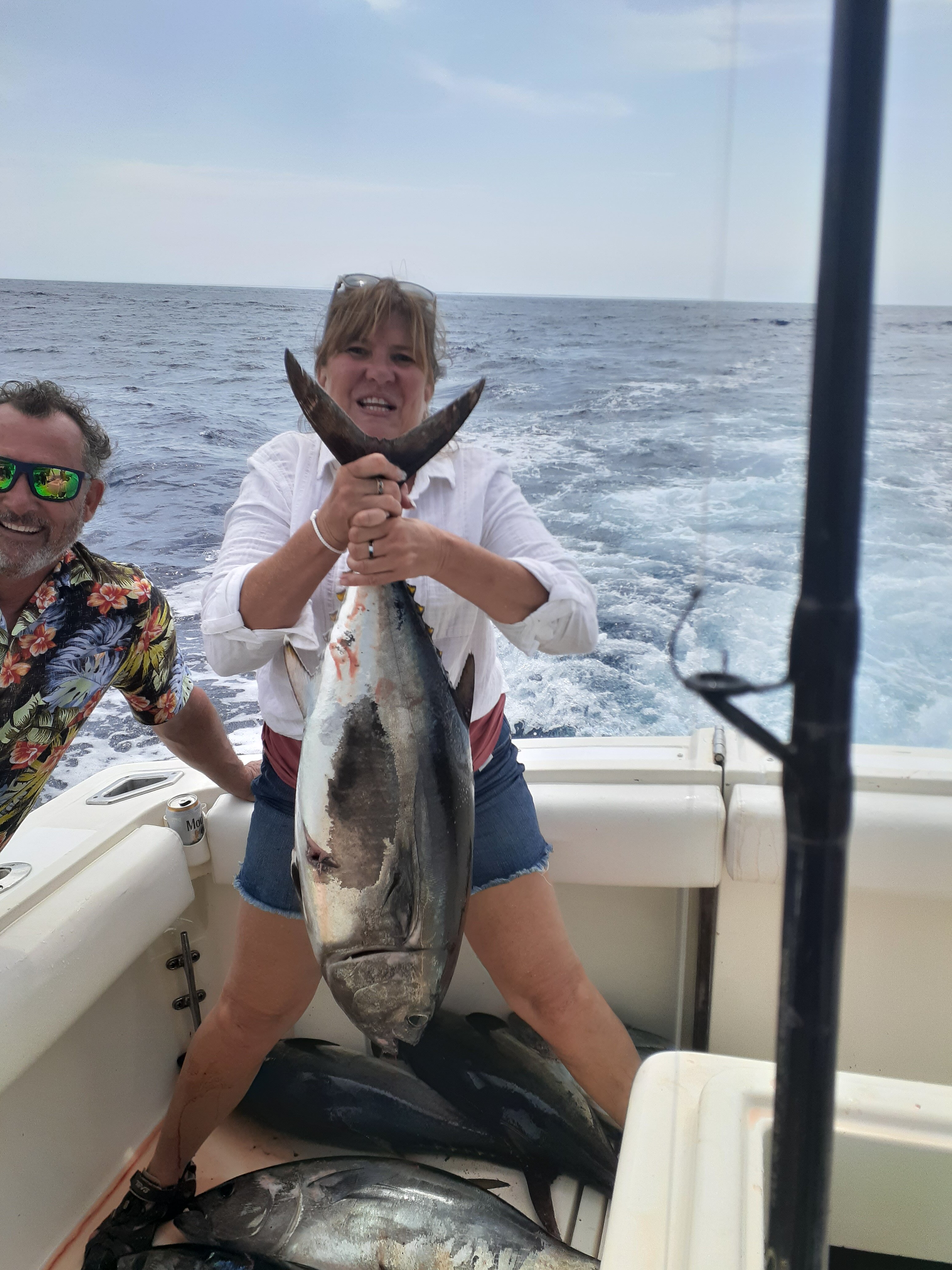 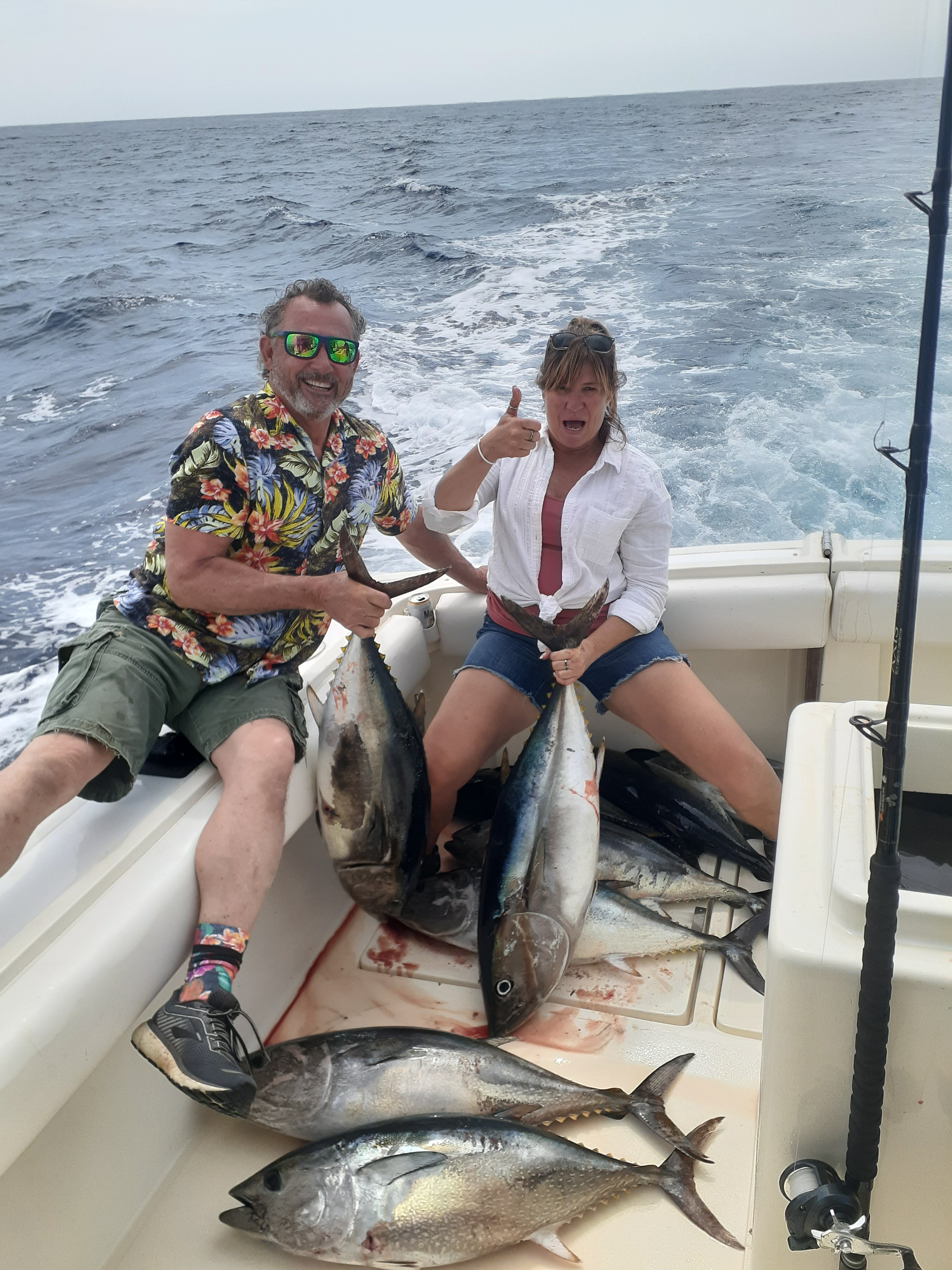 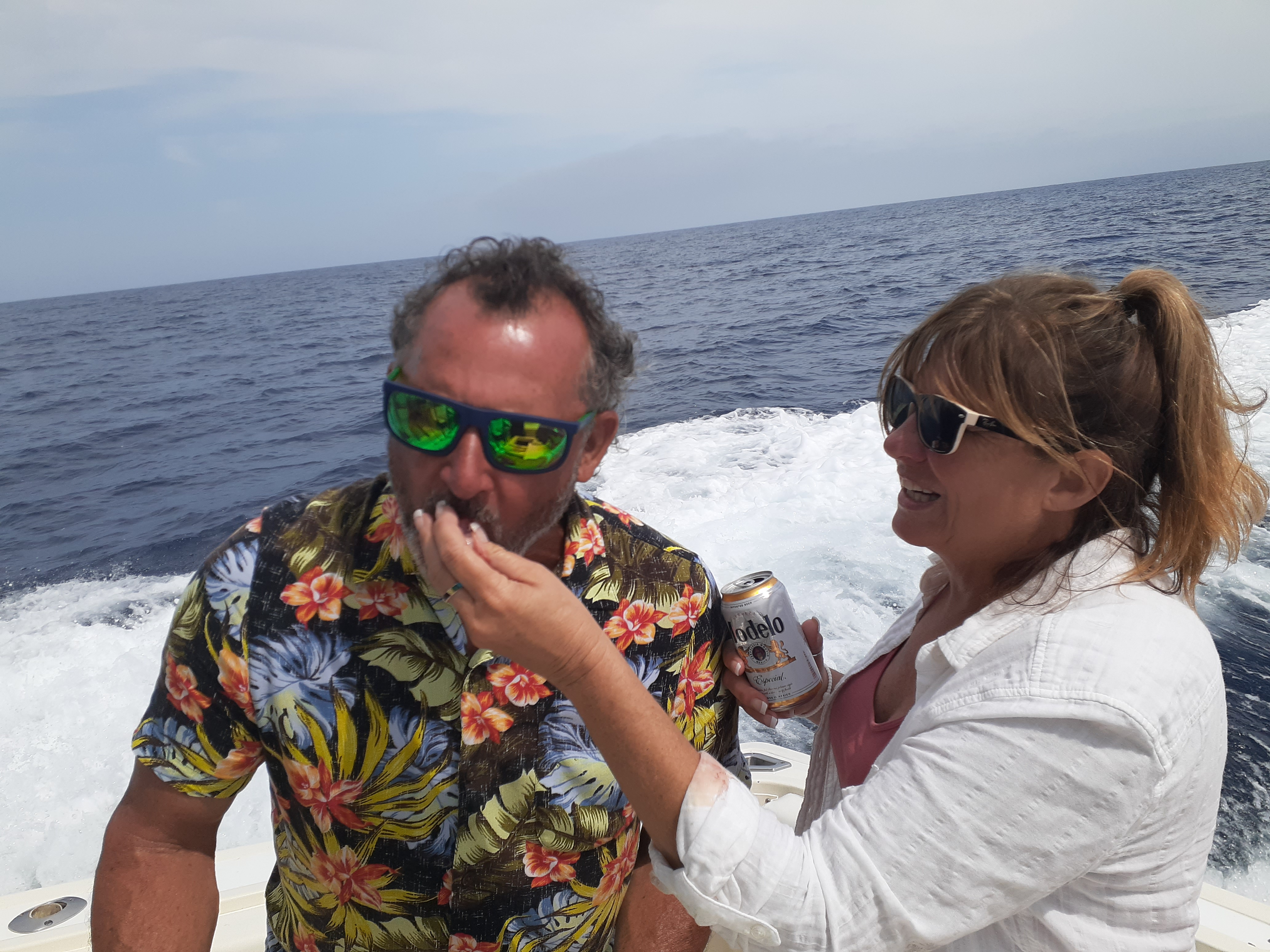 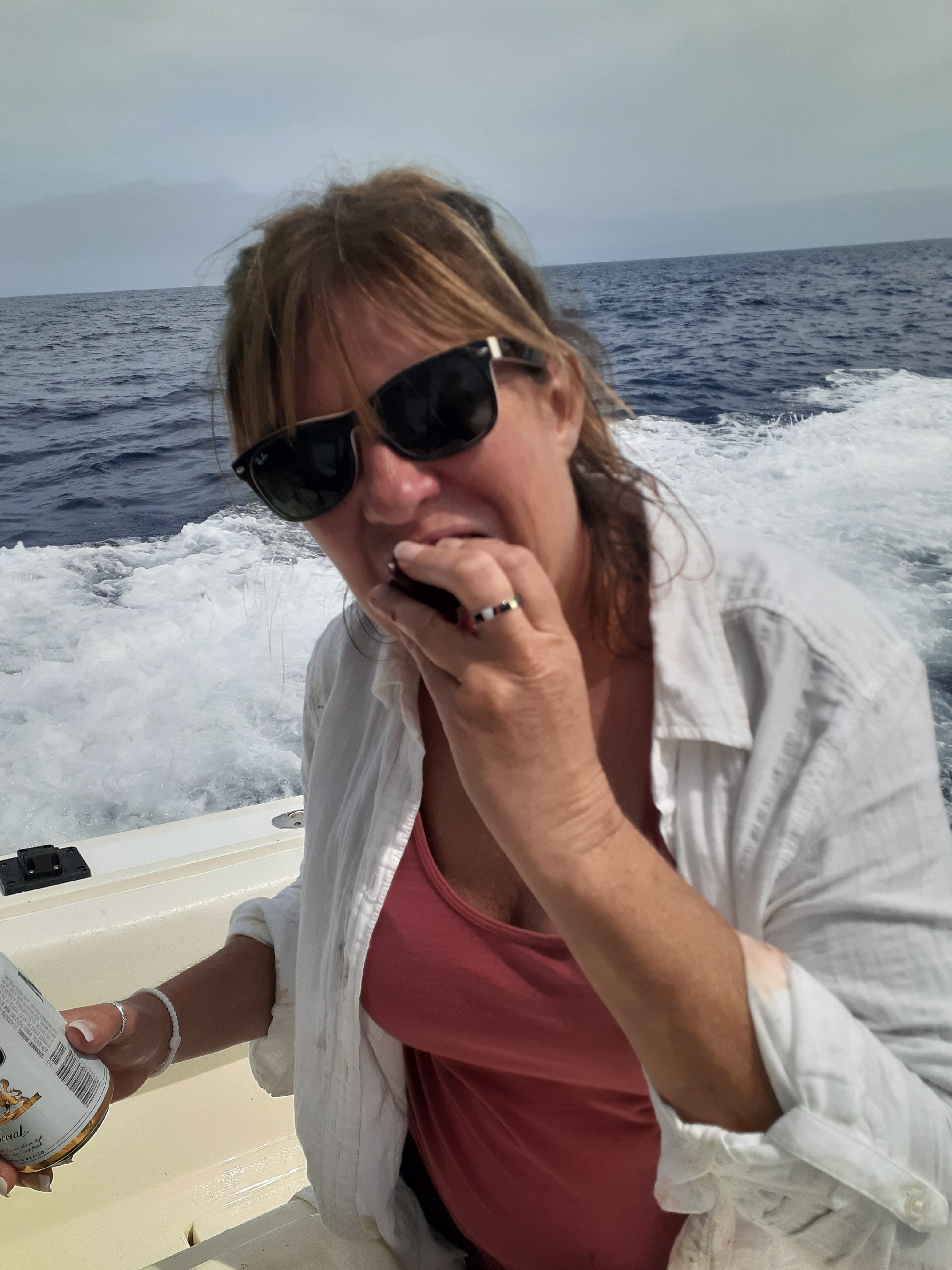 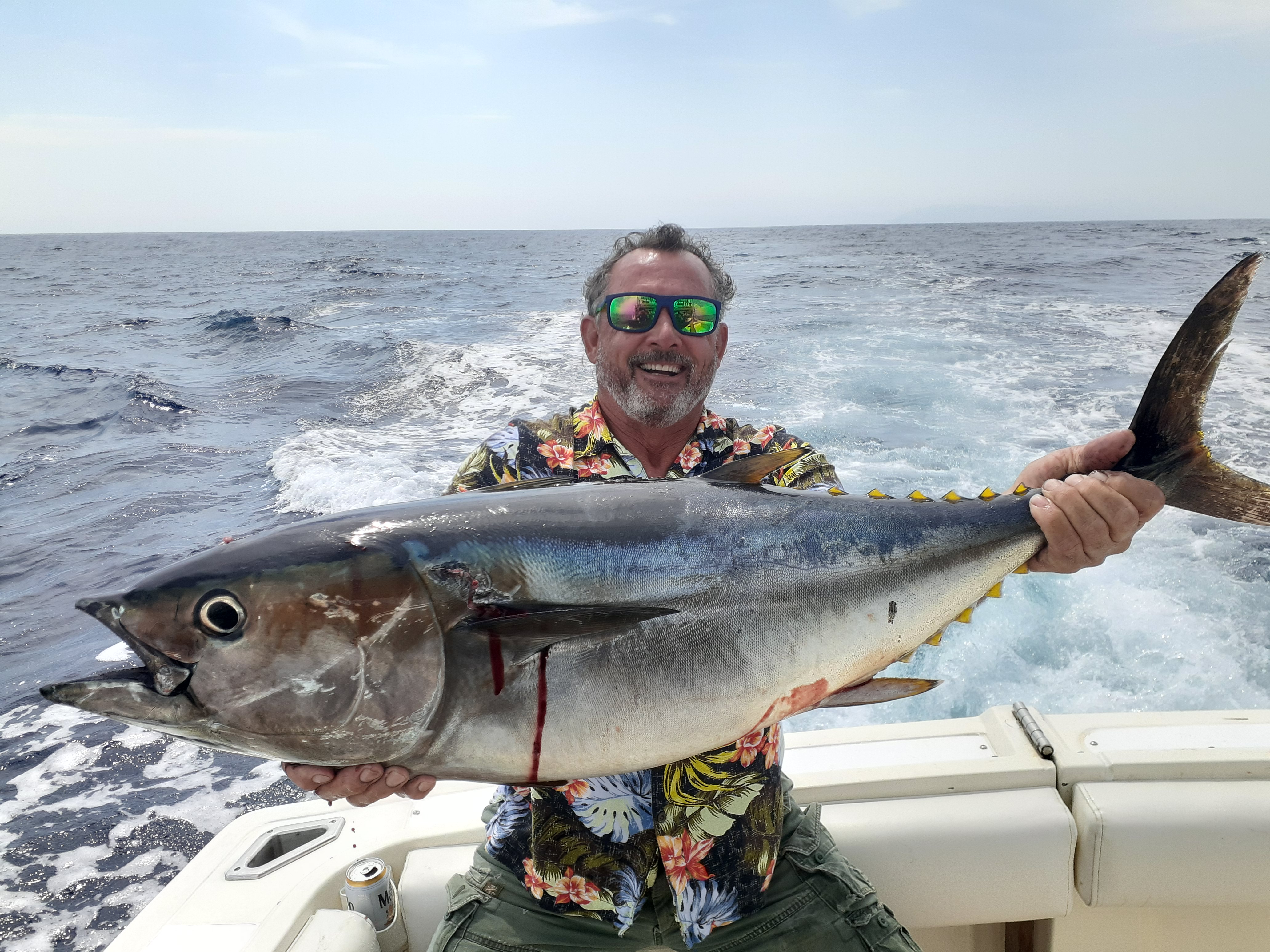 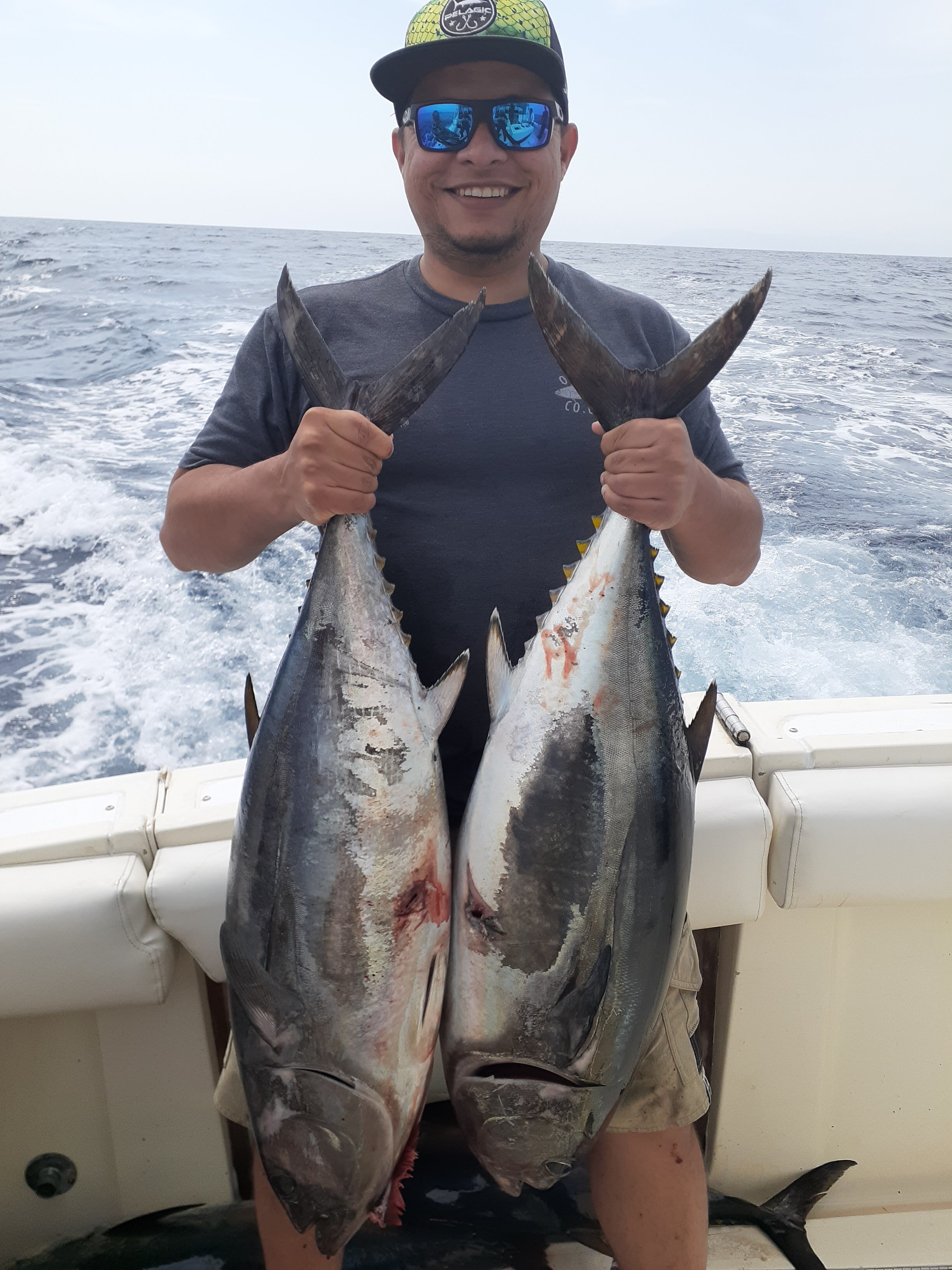 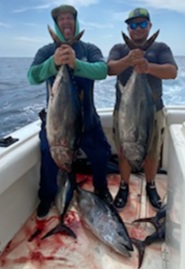 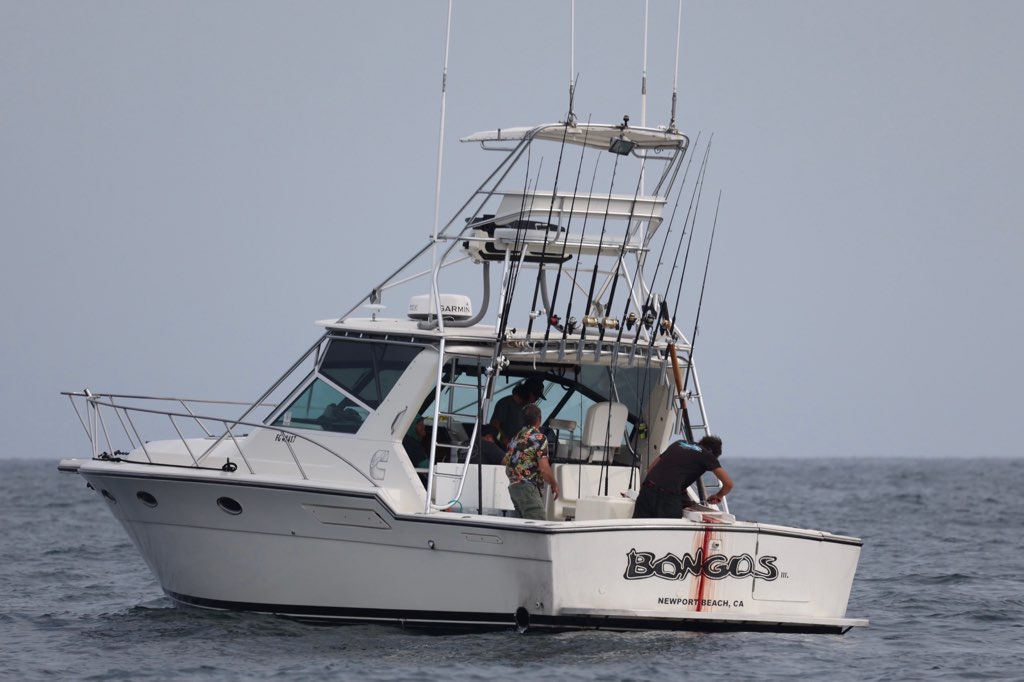 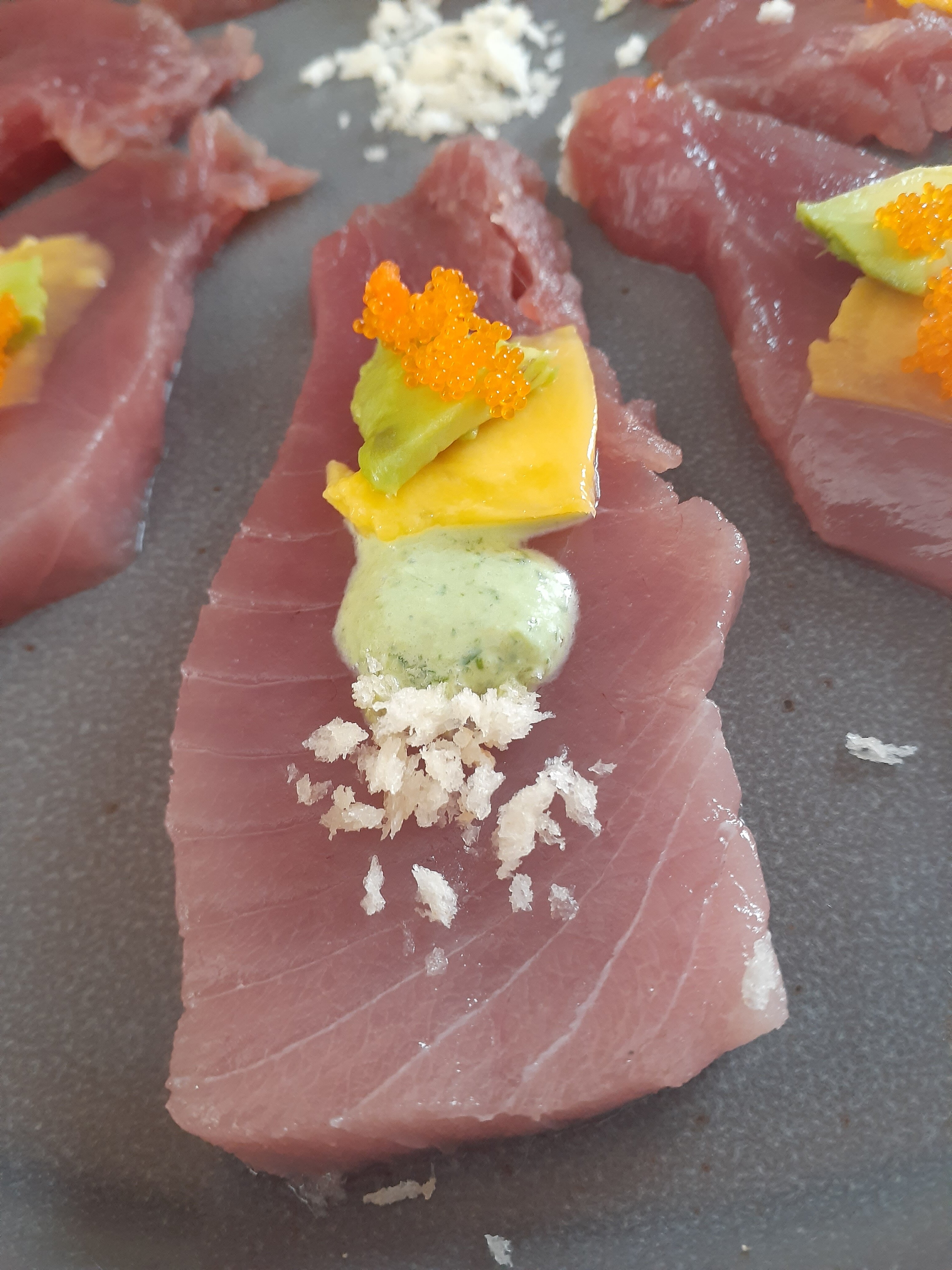 SaltH20Angler said:
Eventually we had 5 or 6 tuna on ice and everyone knew we were going home with fresh fish. That's when Mike and Travis…..
Click to expand...

That’s when Mike and Travis……?
Toggle signature
"Life is a one time offer, use it wisely"
Reactions: SaltH20Angler
Upvote 0

Blackfish said:
That’s when Mike and Travis……?
Click to expand...

Lol I thought that was odd too. Only allow hook and hand offs til you land a few?

Great report and pics!! Totally made me immersed in your trip!! Thanks!
Reactions: SaltH20Angler
Upvote 0

Nice pics and fish. Thanks for the report.
Toggle signature
-AH
I get skunked and I can not lie
Upvote 0

can you give us a "hint" on the popper - rymes with? Looks like? Size of a???
Reactions: SaltH20Angler and esgeo
Upvote 0

#WHERESTHEKELPPADDY said:
can you give us a "hint" on the popper - rymes with? Looks like? Size of a???
Click to expand...

No chance my friend but worth the ask for sure... It's just not mine to give away. I'd be happy to share any of my secrets with you anytime you want. Shoot me a PM.

Disclaimer... My secrets might help you catch less fish. I reserve the right to be wrong about most things.

Thanks for the Invite Chris.
Reactions: SaltH20Angler
Upvote 0

What happened to “ I fish in the ocean, not the internet” lol.
Reactions: Smitty619vt and SaltH20Angler
Upvote 0

Offshore One cast salvaged the day 5/4