Offshore Bluefin on the Old Glory 10/8 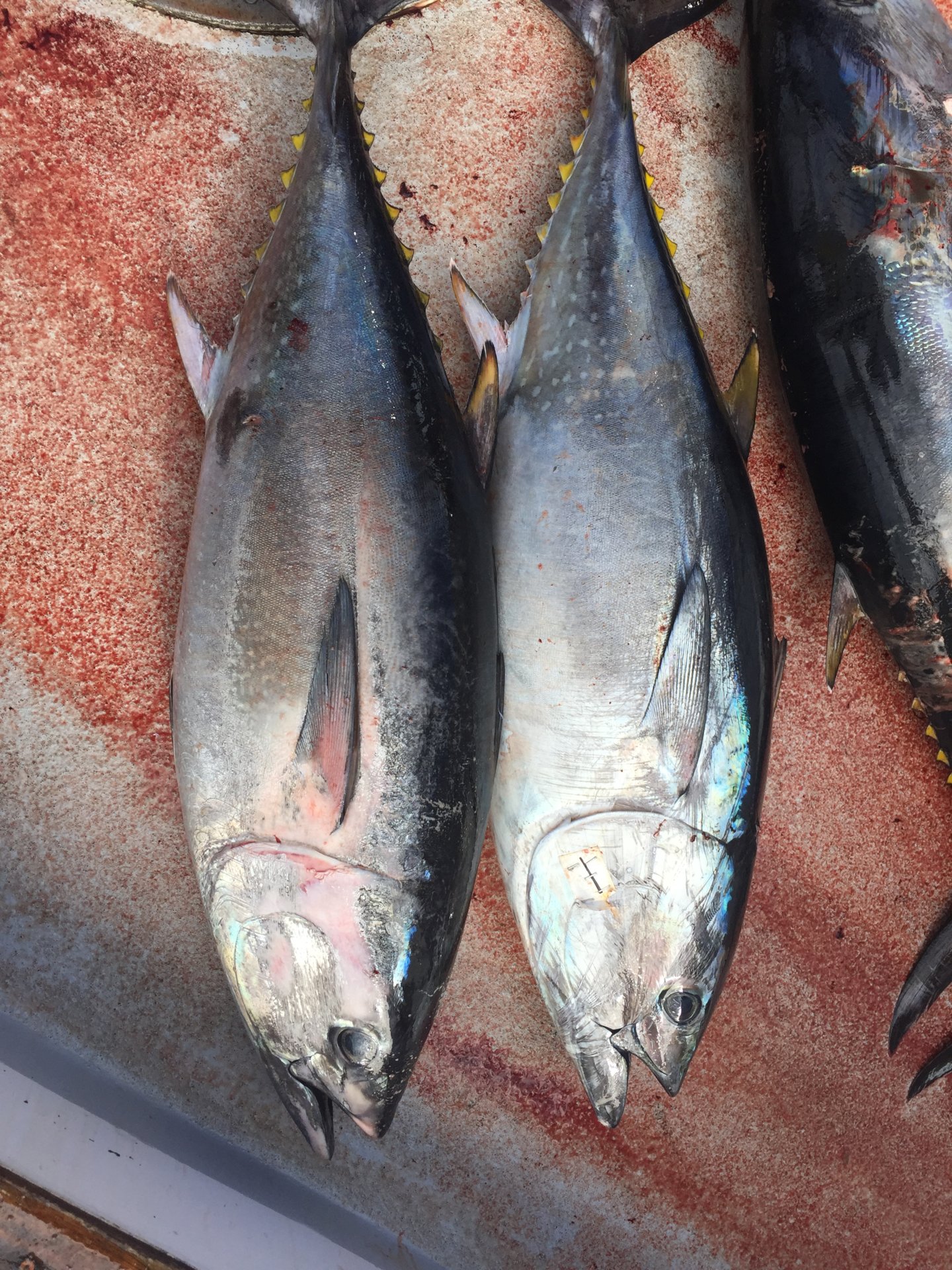 My first post, so let me know if this is what you are looking for in a fishing report

I thought I would try to get in one more trip before the season ends, so I booked an overnight trip on the Old Glory for some tuna fishing at San Clemente Island. There was a light load, and I have always had good luck on this boat, so things were looking hopeful.

The ride out that night was pleasant, the seas were calm all day and there was very little wind to speak of. We started started trolling around 6:00 in the morning, starting off at the southeast corner of the island, where the captain said there were fish a few days previous. We trolled around for a couple of hours, seeing nothing in the way of fish, and the captain said we were going to head over to the west side of the island where there were also fish a few days before.

Getting to the new spot, we start fishing, and almost immediately we get a few fish on. It was slow but steady for the rest of the day, with someone on a fish for the next 3 or so hours. The most frustrating part of the day was seeing all the big bluefin boiling around the boat, but the fish were not all that interested in our sardines. People tried poppers, flat falls and irons, but with the exception of one fish caught on a flat fall the tuna were not interested. The boat ended up with 16 fish for 17 people, and they were all good sized fish in the 40 to 60lb class. The key to catching these fish was using smaller sardines, as the captain mentioned that the fish were eating the small anchovies in the area and were showing no interest in the large sardines we had for bait.

I came home with two fish so the freezer is restocked and I caught my first bluefin!

Overall it was a good trip, with one of the best groups of fishermen I have experienced on a sport boat. No drama, everyone was friendly and worked very well together. The captain and crew of the Old Glory were once again first rate, and I personally think this is one of the best boats in the San Diego fleet.
Reactions: Blue Frontier, SD Fish Guy, jiggyn and 20 others
Upvote 0
L

Nice report what lb test were you using? We’re the fish line shy? Congrats on the first BFT!
Upvote 0

Nice report! We were by you during the morning until we decided to move and find a new location. We caught 2 BFT in the morning. 30lbs test, with 25lbs Flor leader, 1/0 hook w/fly lines dino.

"ONE FISH AT A TIME"

Excellent work great info appreciate the post!
Toggle signature
Many men go fishing their entire lives without knowing it is not fish they are after.
-- Henry David Thoreau​
Upvote 0

Good job and congrats!
Toggle signature
Thanks for your report. Hook up! Cory
Upvote 0

A fine report there Rick.

Eat well bud.
Toggle signature
I CATCH IT. I KILL IT. I CLEAN IT. I DON'T DELIVER IT!
Upvote 0

awesome fish skipper! Excellent report. Thanks for the report.
Upvote 0

Thanks for the kudos everyone, it was a nice trip.

Lake 53, I was using 65 lb braid with 50 yards of a 30 lb mono topshot and 6 ft 30 lb floro leader. Just about everyone on the boat was using a 30 lb. floro leader at the captains recommendation. later in the day I think a few people were going down to 25 lb, but with the possibility of hooking one of the big fish swimming around the boat, most people were hesitant to drop down in line strength.
Reactions: rick rouland
Upvote 0

Very nice report and congrats on the sashimi!
Upvote 0

Nice report, I'm booked on that boat leaving Sunday night if we get enough to run...
Upvote 0

Dont be afraid to fish 20 flouro. With the right long parabolic rod you can pull pretty hard on 20. I got a 45lb'r bluefin and many big yellows heading for the rocks and kelp while palming the line against the foregrip.
Reactions: Peg North
Upvote 0

pukahd said:
Dont be afraid to fish 20 flouro. With the right long parabolic rod you can pull pretty hard on 20. I got a 45lb'r bluefin and many big yellows heading for the rocks and kelp while palming the line against the foregrip.
Click to expand...

Yes to this technique. stealth and kind of like listening to the fish for when you can apply the pressure.

Offshore Bad week to be a Bluefin!