Saw the fleet on AIS between the 371 and 425 so we headed in that general direction, but had been hearing that fish were spotted at the South 9, all over the canyon, 371, 425, 230, 302 and 226 - so basically anywhere below the border. A few miles north of the fleet, we found a paddy and got several yellowtail and went 1 for 3 on bluefin while messing around with light line. We then pushed a few miles south of the fleet where the water temp dropped 2 degrees, but we found a paddy which also held yellowtail and giant bonito. We found some more cold water several miles west of the fleet and got on a nice school of bluefin that responded to chum and we got a solid 40# and lost another. On the way home, we found foaming bluefin all over the canyon and the south 9 where we quickly finished up limits on 25# bluefin that bit small colt snipers. The fish going airborne were smaller models, around 10#, but apparently there were bigger ones underneath. Some guys on the radio were saying that the fish on the south 9 were bonito and skipjack, but we put 2 in the boat and they were definitely bluefin, and better grade than expected. We didn't have to compete with other boats the entire day and came home with a full kill bag.

When we pushed through the fleet in the morning, we checked the boats on the gyros and the sporties were hanging 1 or 2 but the private boats had nothing going on. There are fish everywhere and they respond much better when there aren't 20 boats working a small area. We found fish on the warm and cold side of the temp break, and in the clean blue water at the 371/425 as well as the dirty green water around the south 9. Don't chase boats, leave the poor sporties alone! There are fish everywhere and it's easy to find your own school.

As a general rule, I don't like bluefin, not just because they're finicky, but they tend to have a much fishier taste and dryer mouthfeel than yellowfin. The bluefin around right now are DELICIOUS, the best I've ever had, far better than I've had at Tsukiji or any high end restaurant in the US or abroad. The fish we caught were unusually girthy and when we processed them, the color of the meat was so light that I initially thought the flesh had been burned despite short fights and being chilled in an ice bath. Then we thought that we had mistaken them for albacore or bigeyes. It turns out that the bluefin have been eating well and their flesh is marbled with tons of fat, to the extent that part of the loin near the belly had the color of cooked fish (see top right of the image). I was having some difficulty cutting the loins because my knife was getting sticky from the fat. It was like cutting through bacon. Very mild flavor and buttery texture. Good luck out there! 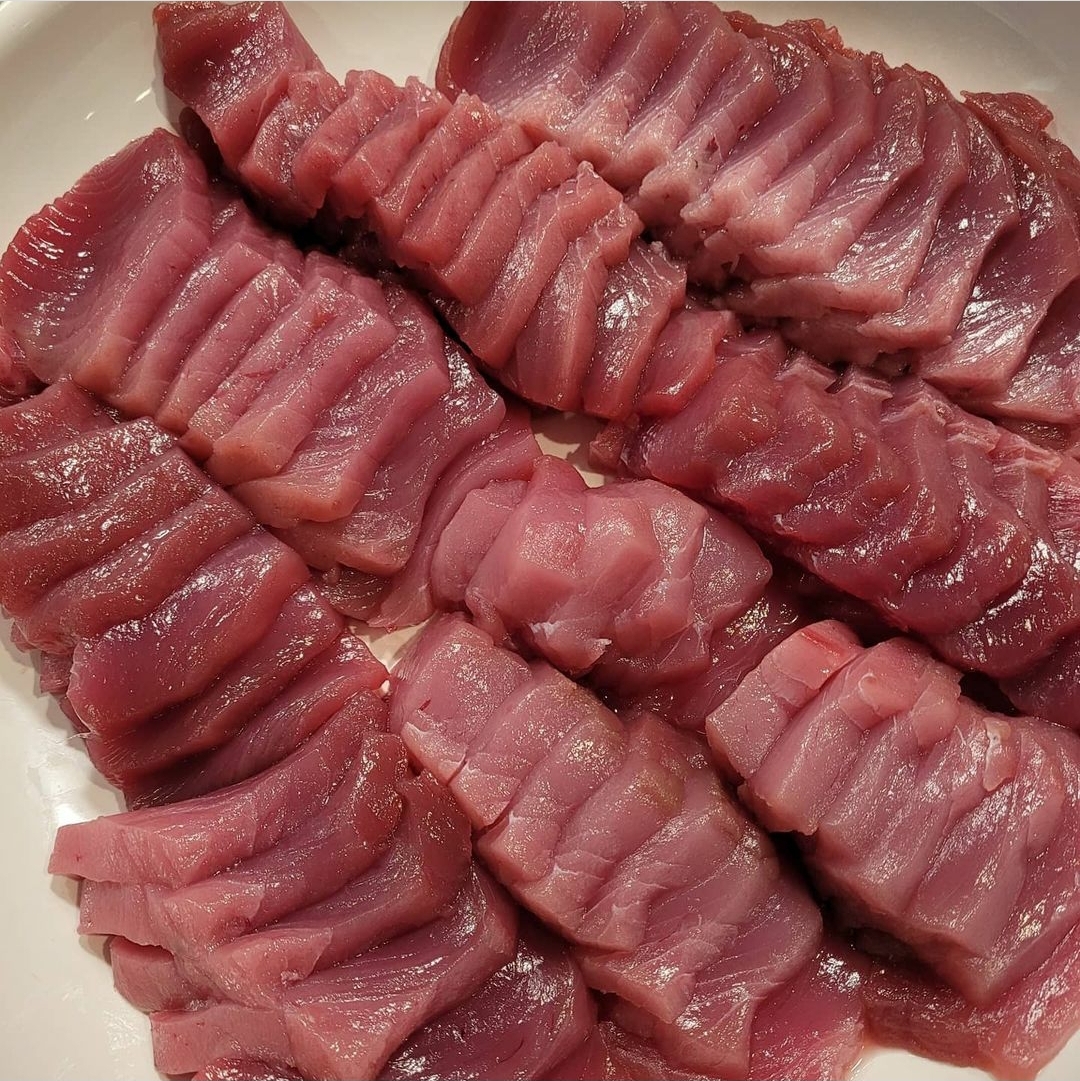 “Shoulda been there yesterday”

Toggle signature
"When beholding the tranquil beauty and brilliancy of the oceans skin, one forgets the tiger heart that pants beneath it; and would not willingly remember that this velvet paw but conceals a remorseless fang." H.M.
Reactions: Willdoggy
Upvote 0

Your remark about the taste of bft hit home to me. I haven't been out much because while I like catching them, I don't really care for the taste. I much prefer yft or albies. But your remark that they are well marbled and taste better as a result has motivated me to book a trip.

Thanks for the indirect encouragement.
Reactions: GarytheCPA
Upvote 0

Good stuff!! We fished the canyon for about 45 minutes with crazy meter marks but the bluefin didn't bite anything. I saw the tiny ones boiling but we just kept having the 10-15lb bonita eat whatever we presented. I guess I should've stuck around longer lol
Reactions: reel loco
Upvote 0

I leave the fillets in big pieces until ready to eat. Keeps a little better.
Upvote 0

ChristianOlande said:
Good stuff!! We fished the canyon for about 45 minutes with crazy meter marks but the bluefin didn't bite anything. I saw the tiny ones boiling but we just kept having the 10-15lb bonita eat whatever we presented. I guess I should've stuck around longer lol
Click to expand...

That's interesting because I didn't see a meter mark the entire day. Maybe my transducer is busted.
Reactions: ChristianOlande
Upvote 0

Great report thanks for the info and congrats on some great eating fish !!
Upvote 0

Boat
Death From Above

BFT tastes fishy? Maybe if you don't bleed your fish and let it sit on the deck of your boat in the sun all day.
Upvote 0

Colonel Kurtz said:
BFT tastes fishy? Maybe if you don't bleed your fish and let it sit on the deck of your boat in the sun all day.
Click to expand...

Very meticulous about fish on my boat. For all tuna, stabbed on both sides behind the pectoral fin for bleeding, then after several minutes, guts and gills are pulled and the fish goes in an ice bath to drop the core temp. A quick rinse and then the body cavity is stuffed with ice and placed in a kill bag and covered in ice. Bluefin still tastes fishy to me, but I'm picky, especially with regards to fish flavor. I don't even put fish sauce on Vietnamese food.
Upvote 0

Otto said:
I leave the fillets in big pieces until ready to eat. Keeps a little better.
Click to expand...

I agree. That photo was taken right before it was eaten. We try to eat everything within a few days of being caught.
Reactions: B-BOYS and Otto
Upvote 0
Show hidden low quality content
You must log in or register to reply here.

Offshore Quick report - Islands to the 425