Palapas La Ventana, Mexico Day 3, Part 2 - Unofficial World Record Black Marlin - After not seeing any more fish we moved to a spot called La Reina on panga “Trece” with Captain Cama. This is a pinnacle that protrudes out of the water and provides a resting spot for some big seals/sea lions. I wasn’t highly motivated to keep diving as I wanted Dana and Pat to get a Wahoo. But my gear was loaded on top of theirs so the captain deployed my float first and I got in the water. I started throwing my flasher as I drifted towards the pinnacle of La Reina. I was getting hungry as I felt my stomach grumble. I wasn’t excited about drifting to close to the pinnacle as I hate when the sea lions come play in the water with you. These guys are big and though they don’t typically bother divers, their sheer size is intimidating. I thought in my mind I would do a couple more throws of my flasher and dives. I threw my flasher and dropped to about 30 feet and watched as it slowly sunk. Suddenly, “IT” was just there staring at my flasher. I saw a big Black Marlin (I initially thought it was a Blue Marlin) about 15-20 feet from me and 6 feet from my flasher. Again, I never saw it until it was there. I watched it for 4-5 seconds, noticed it didn’t have much of a bill, and then I instinctively aimed just behind the gills at the lateral line and shot my custom Wong Squidbone 65 that had 3 bands and my smaller shaft.

My shaft struck the Marlin exactly where I had aimed. The Marlin stopped and rolled to it’s side. I had STONED it! Unbelievable! I thought of swimming to the fish, trying to immediately dispatch it and swim it to the surface. I decided I couldn’t risk that maybe it was just stunned and would come to life and drag me deep or fight me. He was obviously way bigger than me. I don’t remember swimming to and grabbing my flasher, but when I surfaced I saw I had it tucked in my belt. I yelled, like a crazy man, to the panga captain that I had shot a big Marlin. He came over and I told him to go get the other divers as this would take awhile and I may need help. I was eventually able to winch the fish to the surface. We were all surprised at how big the Marlin was. It took all 4 of us to get the fish in the panga. We dove for about 30 minutes more before heading in so as to make sure the fish was fresh and best for eating. I never even considered anything about this being a record fish. I fish for sport and sustenance, not for glory of my name in a book.

We got back to the resort and they had to use a backhoe to get the fish out of the panga. The attempts to weigh the fish were unsuccessful due to the Marlin topping out the scale. We measured (taped) the Marlin. The length was 113 inches, girth was 70 inches, and the tail was 47 ½ inches in width. Typical fish weight formulas place the weight at 692 pounds! The current record for a Black Marlin taken by spear was 581 lbs. Official record or not, I really don’t care. It is my very first Black Marlin, or any marlin as a fact, and I am extremely proud. The fish was filleted and put on ice. Many people were and are enjoying this for dinner for days to come.

In hindsight, many things could have gone way wrong. I won’t go into that at this time, but needless to say my shot was perfect whether it was skill or luck. I have been spearfishing for many years but only freedive spearfishing for about two years. I am humbled to have taken such a huge fish. He is a spectacular specimen of a fish. His bill looked like it had been broken off and was growing back as two or three small stubs appeared to be growing out. This fish was definitely a “Veterano” and had been around for a long time. Thank you, Nathan Lucas and Martin Stepanek my FII intstructors. Thank you Daryl Wong for my custom Squidbone 65 and for helping me with my spearfishing techniques. Thanks to Dana Duncan, my son Patrick Hayes, and panga Captain Cama for all your help. I am still on cloud 9 days later. Thank you to all the staff at Palapas La Ventana including but not all inclusive of guides Garth and Brock, Nikki, Yoli, Ismael, and Ruben. What an awesome place for spearfishermen. I can’t wait to go back. 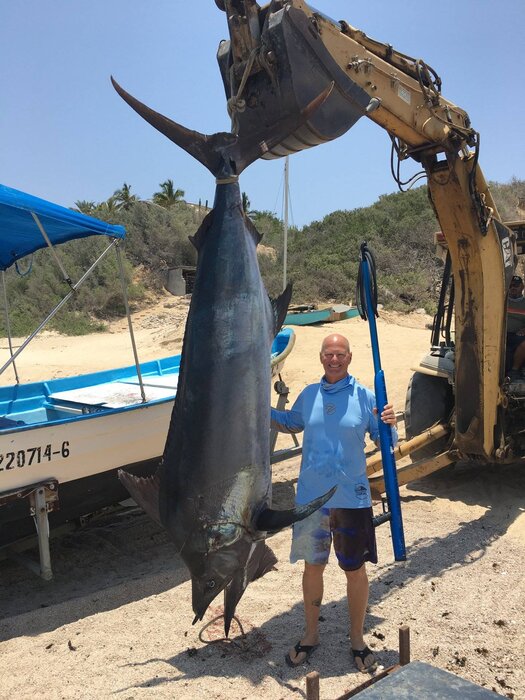 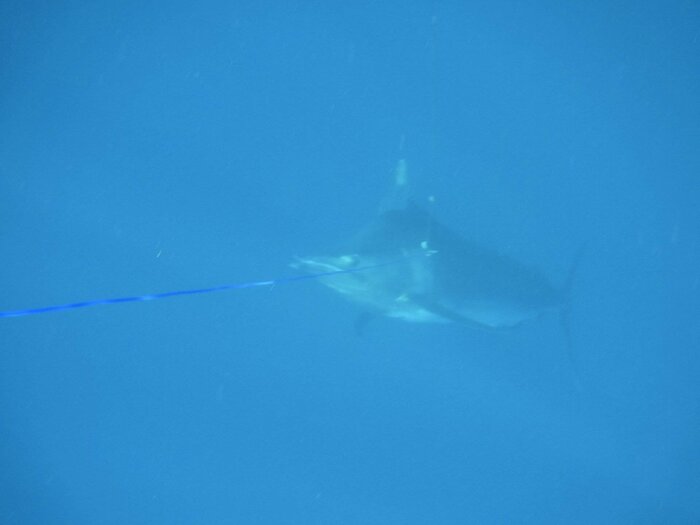 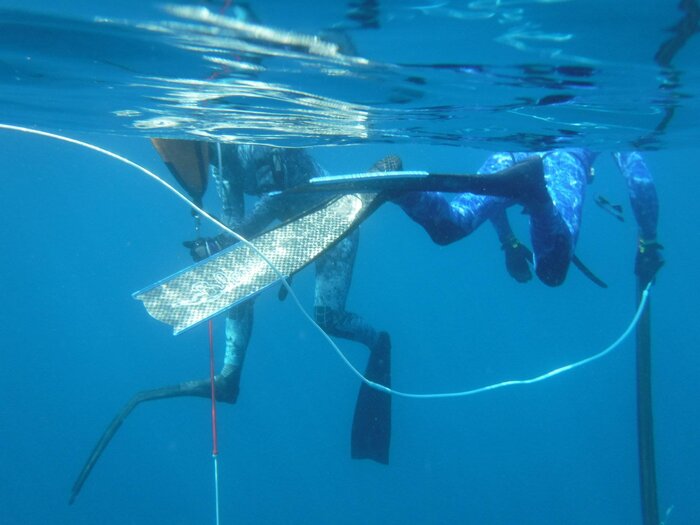 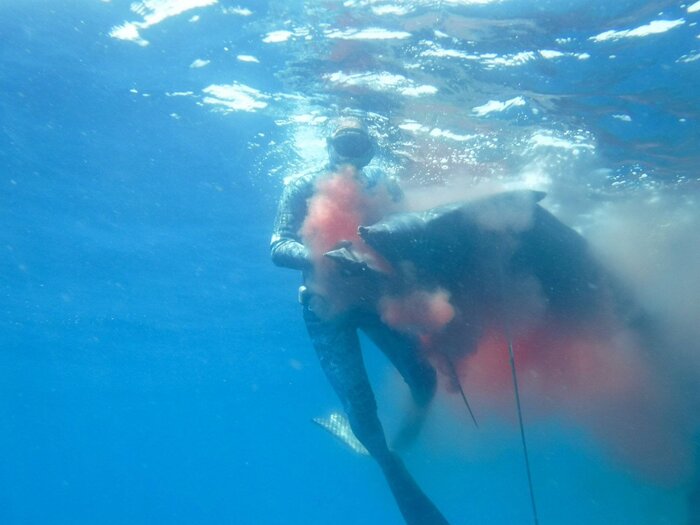 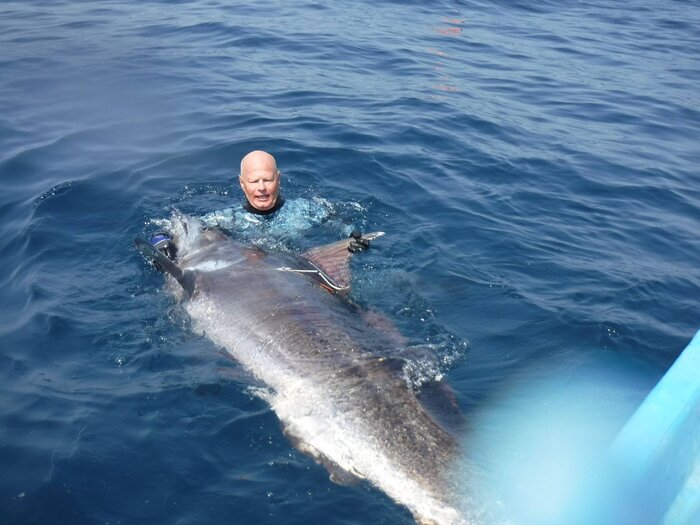 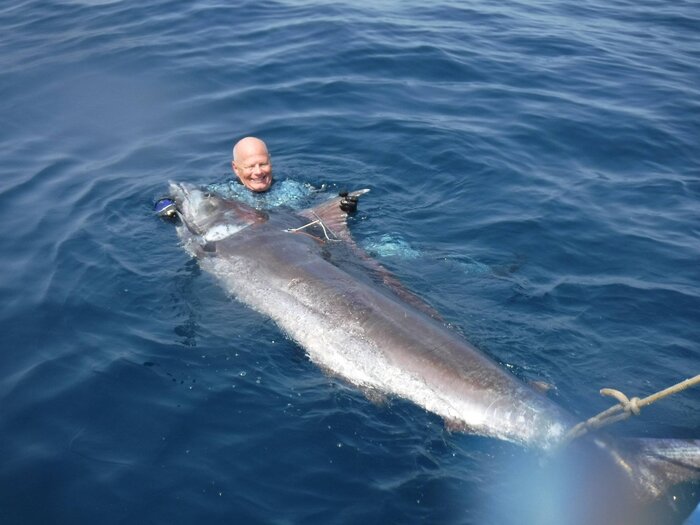 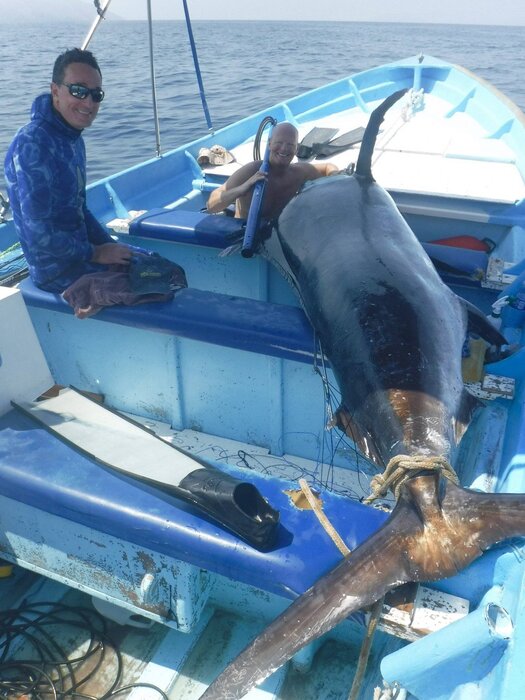 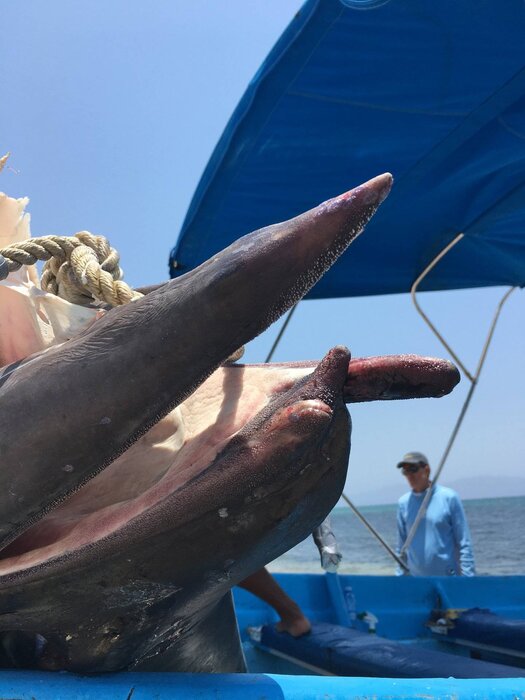 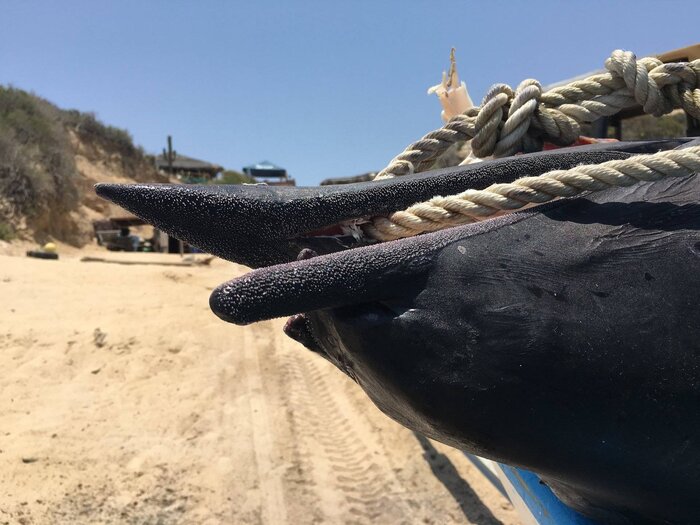 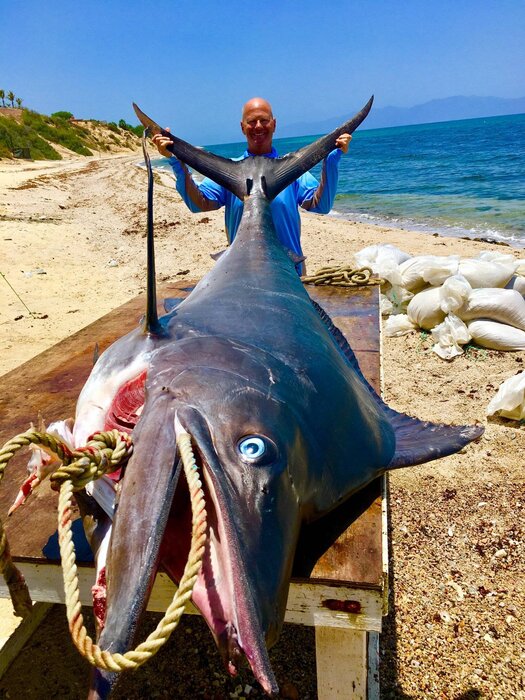 Wow. Monster. What if the spear shot did not stone the big marlin? Any chance of landing it alive?

Expand signature
"When beholding the tranquil beauty and brilliancy of the oceans skin, one forgets the tiger heart that pants beneath it; and would not willingly remember that this velvet paw but conceals a remorseless fang." H.M.

AndyJ said:
Wow. Monster. What if the spear shot did not stone the big marlin? Any chance of landing it alive?
Click to expand...

I think that goes with any form of hunting, fishing or spearing. Losing the animal is always a risk we take, hopefully a calculated risk with the right equipment (proper floats/rifle/etc) for the kill. Looks like you had the right gun for that range. Good on ya for honoring that fish and feeding half of baja!

Why did you shoot a Marlin? Just curious?
Reactions: karlk1125, Alcapone805 and psd58

I shot a Black Marlin for numerous reasons.
1. Because I had the opportunity
2. It is legal
3. They taste good and I like to eat fish
4. And most likely for many of the same reasons you caught a 200 plus lb tuna
Etc.
Reactions: c-goat, Local Fishin', R&R and 2 others

Wow. That's some fish, and with a medium-sized gun no less.

Thanks for posting the pics of the bill 'stubs'. Very cool, particularly with those nubs on the lower jaw.

2tuna said:
Wow. That's some fish, and with a medium-sized gun no less.

Thanks for posting the pics of the bill 'stubs'. Very cool, particularly with those nubs on the lower jaw.
Click to expand...

Those nubs aren't on the lower jaw, they are on the upper bill part of the marlins mouth. Speaking of, I've seen some broken bills on marlin, but never quite like that..... those nubs are a trip!

Makes me wonder how that fish made it through the years without any bill at all, as they use it so much in their hunt to feed.

These fish are notoriously easy to shoot and most experienced spearos will tell you they don’t shoot them... ask Dr. Wong. Majestic animals to see underwater and they let you get ridiculously close without spooking... just my $.02
Reactions: karlk1125, kevina and pascuale

When you are no longer a newbie, perhaps why will be understood...it was mano vs. mano (man to man, for landlubbers)…...a fish that size can kill you...It is the fish of a lifetime and did not go to waste....you only have a few seconds to decide and he did just fine.....nice story and pics!
Reactions: ScaleyOne and streetnfish

Long Beach Bob said:
When you are no longer a newbie, perhaps why will be understood...it was mano vs. mano (man to man, for landlubbers)…...a fish that size can kill you...It is the fish of a lifetime and did not go to waste....you only have a few seconds to decide and he did just fine.....nice story and pics!


How long does does it take to no longer be a newbie?
"Man to man for landlubbers"