Got the invite to fish on a friend's boat out of Dana on Saturday. We started inside the 209 when we found birds working and some dorado crashing under them. These fish were crushing micro anchovy and moving fast. Made a few casts with the popper and then placed it right in the middle of the frenzy and hooked up instantly. I dumped that fish at color, and shortly after we lost one on bait. A few tries later I had a nice one swipe the popper, a nice bull probably close to 15 lbs. We did this for a little while and each picked off one more on the popper. Once that school destroyed all the anchovy in the area and sunk out, we checked out the armada of boats near the 312 and tried a drift, but we quickly decided against competing with 40+ boats. We found a few more schools throughout the day, but after noon, none of them really wanted to go for us. Water temp reached 77.5 and weather was great, a bit of a south swell but very little wind all day. Now for the dinghy...

After checking off a yellowtail and yellowfin (and losing a bluefin) last year, the next fish on the list was a dorado. We got an earlier start on Sunday and made it to the ramp shortly after 6am. There was a pretty good breeze as soon as we got to the parking lot, which wasn't a promising sign. Waited for bait and got some nice sardines in the aerated cooler (which we didn't end up needing). The weather outside the jetties was pretty nice, so we decided to try to go offshore. We are definitely careful going offshore in the dinghy and check multiple weather forecasts, and were prepared to turn around and fish inshore if we had to.

Once we got a few miles off the beach the wind started to lay down and it got pretty nice. We brought extra gas today and made the long run close to the area I had fished the previous day. Once we arrived it took me about 5 minutes to spot some birds circling, and shortly after the dorado showed up under them. I had the same popper tied on, and a few casts in hung a nice fish. I realized my drag was fully loose and the fish cartwheeled and spit my popper before I could wind in my slack. I wasn't doing too great, going 0/3 and somehow breaking one off, losing my $40 popper on a fish, but my brother eventually hooked up on the surface iron. There was another boat that set up on the school downwind of us, and the fish got a little too close to them, but they were able to back out before anything bad happened. Got the fish boatside and saw it was snagged, and I hit it right in the hard part of the head with the gaff and it just deflected out. Fish freaked out a little but stayed on, so next chance I had I just took the easy shot in the side and got it in the boat, a nice dorado and the first one in the dinghy!

Got reset on the school, and had one of the coolest moments in our dinghy to date. The whole school got really fired up and was charging the boat while pushing bait. We each made casts with the surface iron and doubled up as hundreds of dorado swam under our boat. These fish both were hooked in the mouth, but my brother farmed his and mine shook the jig right at the boat while he grabbed the gaff. After this, we saw fewer and fewer crashing on the surface. At the same time, a pretty stiff breeze had came suddenly out of the south early, around 10:30am. We hung out in the area for a few more minutes to see if we could get one last shot, but the wind got a bit worse so we decided to head in. We were able to cruise back with the wind, and once we got about halfway home it died down a bit and made for a not-too-bumpy ride home. While I was hoping to land one, I was happy to get one in the boat and had caught some Saturday, and it was definitely the right decision to head in before the wind. Super fun day of fishing and we probably burned less than 5 gallons of gas, while making it back with plenty of time to clean the boat and cut the fish up for some beer battered mahi tacos. 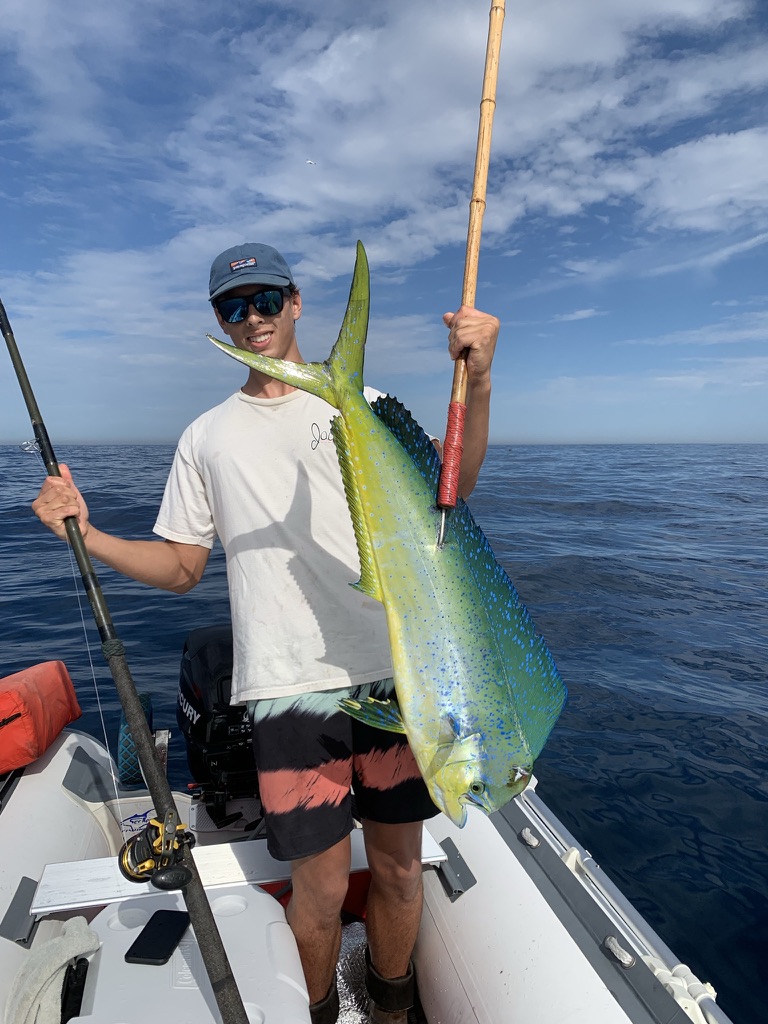 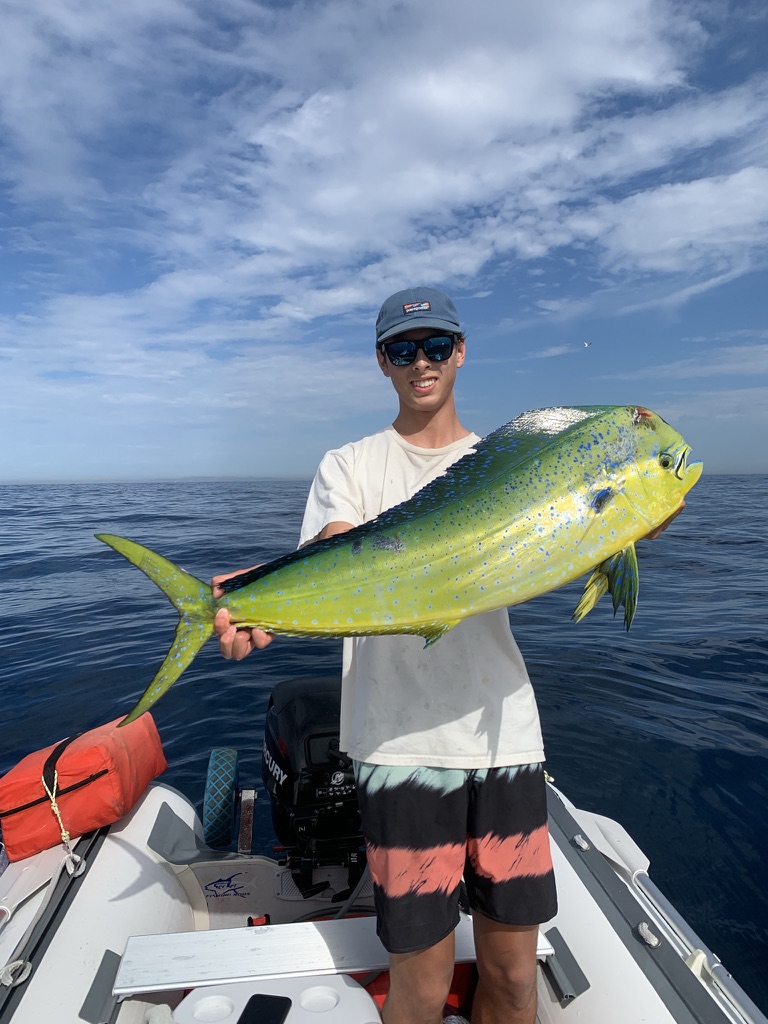 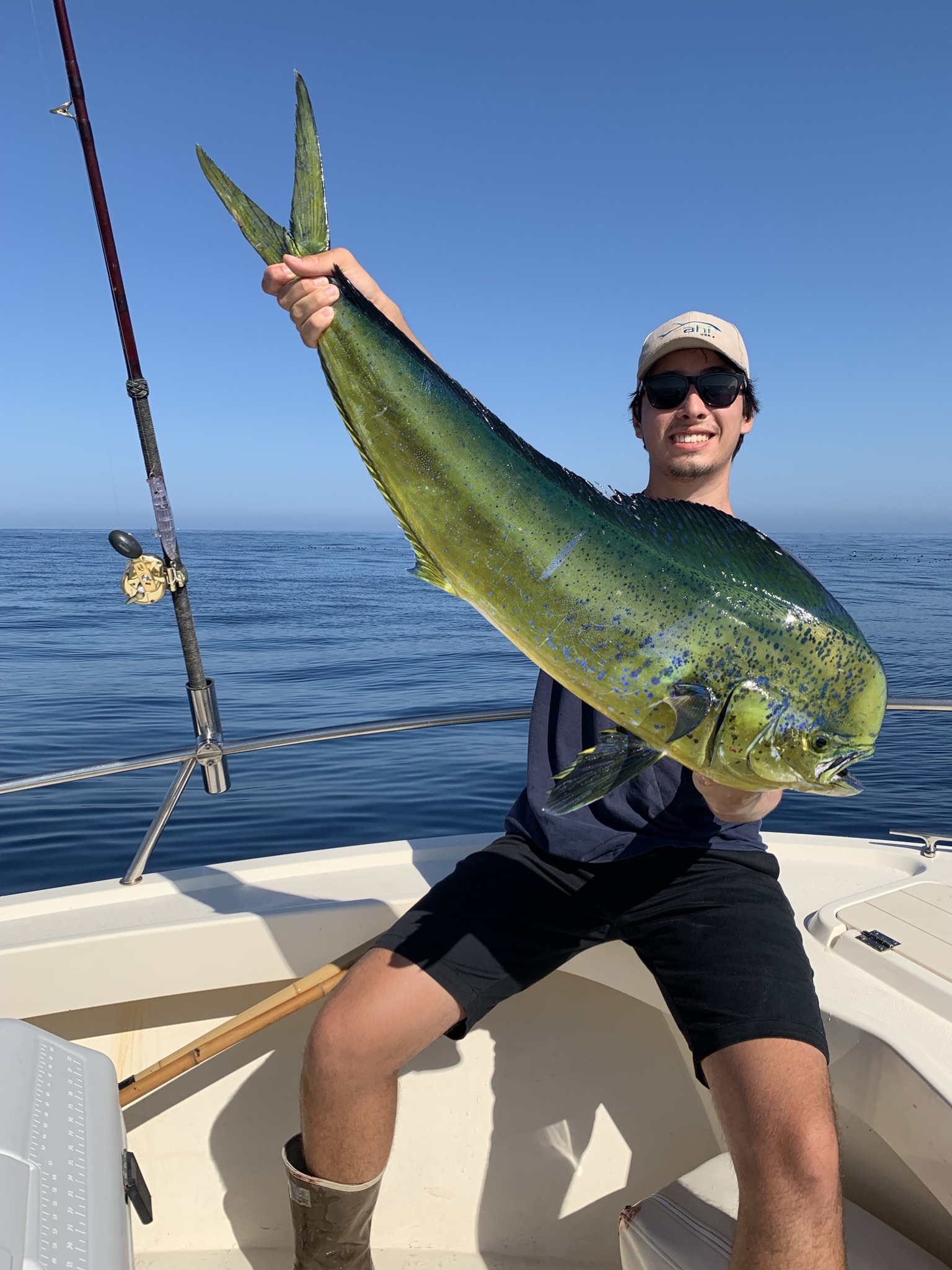 Fyi a big Walmart halibut type net works for dorado they curl up and relax in the net. That way no gaff on the inflatable and no meat shots on the loins hope this helps…Good day on the water !
Reactions: DavesKorner, Sebastian Hong and Tunahead
Upvote 0

Thanks for the report and details. I was going to suggest not to deep fry mahi mahi, but I have never tried
Upvote 0

cool report - thanks for writting this one up.
Toggle signature
"A bad day of fishing is better than a good day at work."
Upvote 0

Cover it in Panko and fry it up! It’s delicious!

It's one of my favorites grilled, pan seared, or deep fried, they're all really good in my opinion
Reactions: bayparker
Upvote 0

JoelSC said:
You went all the way to the 209 on the dinghy? or did you get towed out?
Click to expand...

no we drove out, didn't quite go all the way to the 209 but still a pretty good distance for the dinghy
Upvote 0

What brand is your inflatable? Looks like Newport Vessels.
Toggle signature
Steve

Sebastian Hong said:
no we drove out, didn't quite go all the way to the 209 but still a pretty good distance for the dinghy
Click to expand...

Also some advice for a better ride, ditch that rear bench seat and sit on the side. Or mount a mesh swivel seat to it.

Ditch the cooler for a kill bag and put the fuel can at the bow. It’ll get on plane much quicker.

Is yours a RIB or SIB?
Upvote 0

yeah that's the one, we have the Catalina model
Upvote 0

I was fishing the 150mm clear choice popper, the 130mm would probably get bit even better but a little tough to cast. They were all plugged with 3" anchovies so I imagine a really small coltsniper or something similar would probably work too
Upvote 0

Sounds good maybe we can buddy boat out there! Although we probably wouldn't go out to the 499 lol, that's well past the backside of cat so i don't know that I'd take my chance with the weather out there
Upvote 0

lowprofile said:
Also some advice for a better ride, ditch that rear bench seat and sit on the side. Or mount a mesh swivel seat to it.

Ditch the cooler for a kill bag and put the fuel can at the bow. It’ll get on plane much quicker.

Is yours a RIB or SIB?
Click to expand...

we have a SIB but it has wood floor boards inside. The cooler is actually our bait tank, we run a couple aerators through it and we can usually keep bait in half decent shape.
Reactions: lowprofile
Upvote 0

To deep fry, it is imperative to use Peanut Oil. It handles the heat with out smoking. Get it hot, I drop hot dog shaped prices, rolled in seasoned flour, in and scoop them right back out. Maybe 8 seconds. Drop in a new style squared off Taco shell, cover with Shredded cabbage and hit with White Sauce. Spectacular!
Reactions: bayparker and Jeff Hannah
Upvote 0