Looks like a lot of people did well last weekend. I headed out late Saturday with fishintuition and another friend. As soon as we left the harbor we run into a big bird pile. it was late in the day and I really wanted to get across to troll but since it was in our path, had the crew drop back two lines. One of my tiagra 80wa's decides to turn backwards after setting. Anti-reverse seemed to be broken so pulled it in and trolled threw with one line. No joy so we kept going.

Started trolling ledge about 430ish. By sundown we had two mahi, two onos, and some small kawakawas in the box.

Headed just short of the fingers to drop deep. Kept getting either no bites or cut off for a few hours. Gave up and headed to shallows to see if my light could attract akule or something. Nothing came around. Put out an opelu and everyone kinda dozed off, then that line went off. everyone up and excited, but it turned out to be a shark. Went out to the ledge and dozed off again.

Sun started coming up so went back to trolling. Picked up Onos and shibis on way to crazy corner, then mahis and onos around bend.

Wanted to come home early so decided to turned into channel. About 1500ft deep reel starts dumping line and I see a tail walker way behind the boat. The way the line is dumping i'm thinking we need to chase him so fishintuition is on the fish as we start cleaning lines. Throtled down to a little above idle before that and guess it was to slow, it came off while clearing lines.

Circled the area and and nothing. Cleared lines and started running in. Almost to other side we spot a big pile so decide to ck it out for a quick pass. Used spiners and small aku lures and got two in boat. on third bite, fishintutions aku gets hit. My other friend said he saw it and it had a forked tail. Fish is stripping the spinner so were thinking small marlin or big shibi.

Fought and chased the fish around for an hour. Kept gaining line and then he kept taking big runs (on spinner so runs seemed very big). Finally had him to surface and it turned out to be a big shark. It took another big run and fishintuition just held the spool so we could break off and go home. 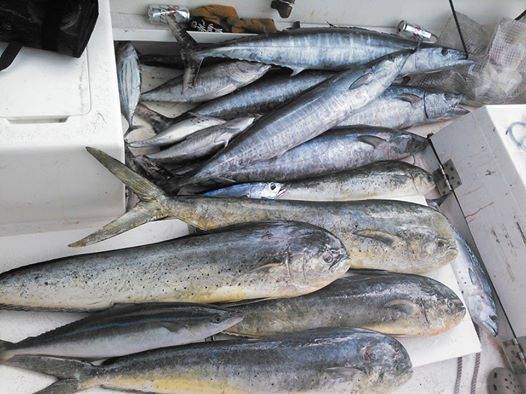 Not sure how I missed this, Robert you and the boyz had a banner day. Nice haul.

Nice mixed bag! Catching that marlin would have been icing on the cake.
Expand signature
Stop Wishin' and Go Fishin'
Start Me Up Sportfishing - Maui

My arms are still sore from that freakin shark.

Now that is a nice haul! Good going on that mixed bag.....nice to know the fish are cooperating.

Very nice catch, hope to get that much fish in my boat one of these days.