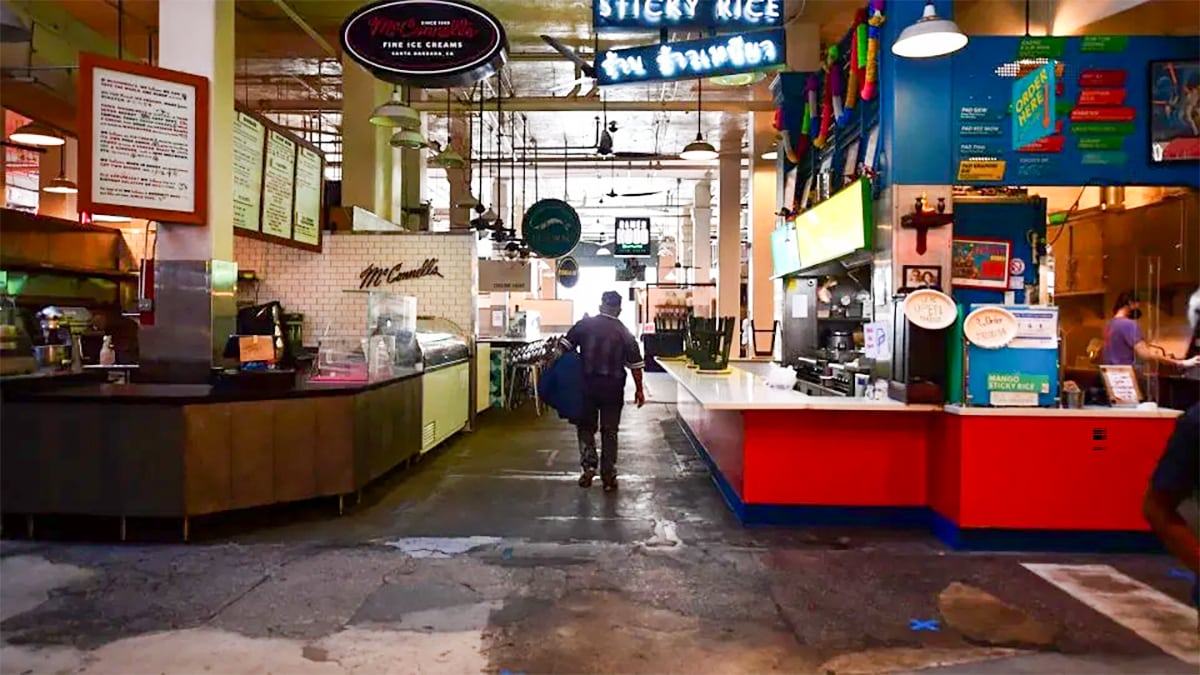 As California begins to open its economy after almost two months of lockdown, an inflow of coronavirus cases south of the border – where the illness is yet to reach a climax – is becoming a growing cause for concern.
In the San Diego border city of Chula Vista, hospitals are fast becoming swarmed with COVID-19 patients who have traveled north from Tijuana, one of the hardest-hit cities in Mexico.
“San Diego County and Baja California, Mexico have long enjoyed a strong cultural and economic relationship that has been treasured by both. Tens of thousands of people travel back and forth legally across our border every day, among them, some of the 250,000 American citizens who live in Mexico,” a representative of Scripps Health, which operates the Scripps Mercy Hospital in Chula Vista, told Fox News on Monday. “We are not suggesting the border be closed, but rather that we institute health screens in both directions to protect the United States as well as Mexico, as this virus does not recognize borders. And we need to ensure the hospitals at the borders receive sufficient medical, pharmaceutical, and laboratory testing supplies.”
The top brass at Scripps is hopeful that federal authorities will begin scanning for high temperatures at the U.S. port of entry, and impose mandatory quarantines of those suspected of having contracted coronavirus.
Tijuana Bull Ring
There are a good number of bird schools working just a bit offshore in over 150 feet of water. Not all, but some of these have bonito on them, and a smaller number have barracuda.…Fish Dope

These are big bonito for the most part, with the smaller ones in the 6- to 7-pound range. Most appear to be in the 8- to 10-pound class, and there are a few even bigger than that around as well.…Fish Dope
Try trolling small feathers or Rapalas while glassing the water looking for bird piles. Once you get a jig stop or find foamers, cast Colt Snipers, and wind at a medium speed…Fish Dope
Coronado Islands / Rockpile
The yellowtail bite, in general, is slower than the wide open bite late last week, but it is by no means dead. It is a “hit and miss” situation with some guys not doing so well while some others whack ’em good.
Lately, the best scores have been coming from the lighthouse kelp to the Ribbon Kelp at South Island.
During the hot bite, it was the weather side of North Island, including Pukey Point and the Keyhole, that were working well. The NE side of North Island was holding a lot of yellows too. The Middle Grounds had some excellent schools running up and down the ridge. Some good scores came from there as well. Since Saturday, these locations have given up a few, but not the big numbers. In addition to the yellowtail, there are some good numbers of bonito around too.
The yellowtail are running in the 12- to 15-pound class with a few little 6- to 8-pounders in the mix. The bonito are running from smaller 6 or 7-pounds up to around 12- to 13-pound monsters.
The best fishing since the bite began started last Thursday, and has been best in the afternoons. Sardines, either flylined or slow trolled, is working best. Surface iron and trolled Rapalas are also scoring.…Fish Dope
371 / Upper Hidden Bank
This area remains the “go-to zone” for both bluefin and yellowfin.
The best signal, the best biters, and the best quality are all here roughly between the 371 and the Upper Hidden Bank on the CLEAN side of the color break.
There is also a pretty good chance of scoring yellowtail on kelps. In general, they are close to the dirty water or just barely inside of it.
Bluefin are running from about 75-pounds up to 160-pounds, with a high percentage heavier. The yellows are in the 6 to 10-pound class.
Still, there are very little surface signals for the volume of fish that are here. Most of the bluefin are being found on sonar marks.
The hot ticket right now is the balloon/kite with a dead flyer, but the double/trouble sardine or green mackerel are both working too.
As mentioned above, there are also some yellowfin. These are in the Upper Hidden Bank area. They are in smaller numbers, but they are here. Watch for dolphin, puddlers, and jumpers. All have accounted for a few yellowfin in recent days. Trolled cedar plugs are what most of the yellowfin have been caught on so far…Fish Dope
Ensenada
Closed. Only locals can fish for food.
San Quintin
Closed. Only locals can fish for food.
Bahía Ascensión 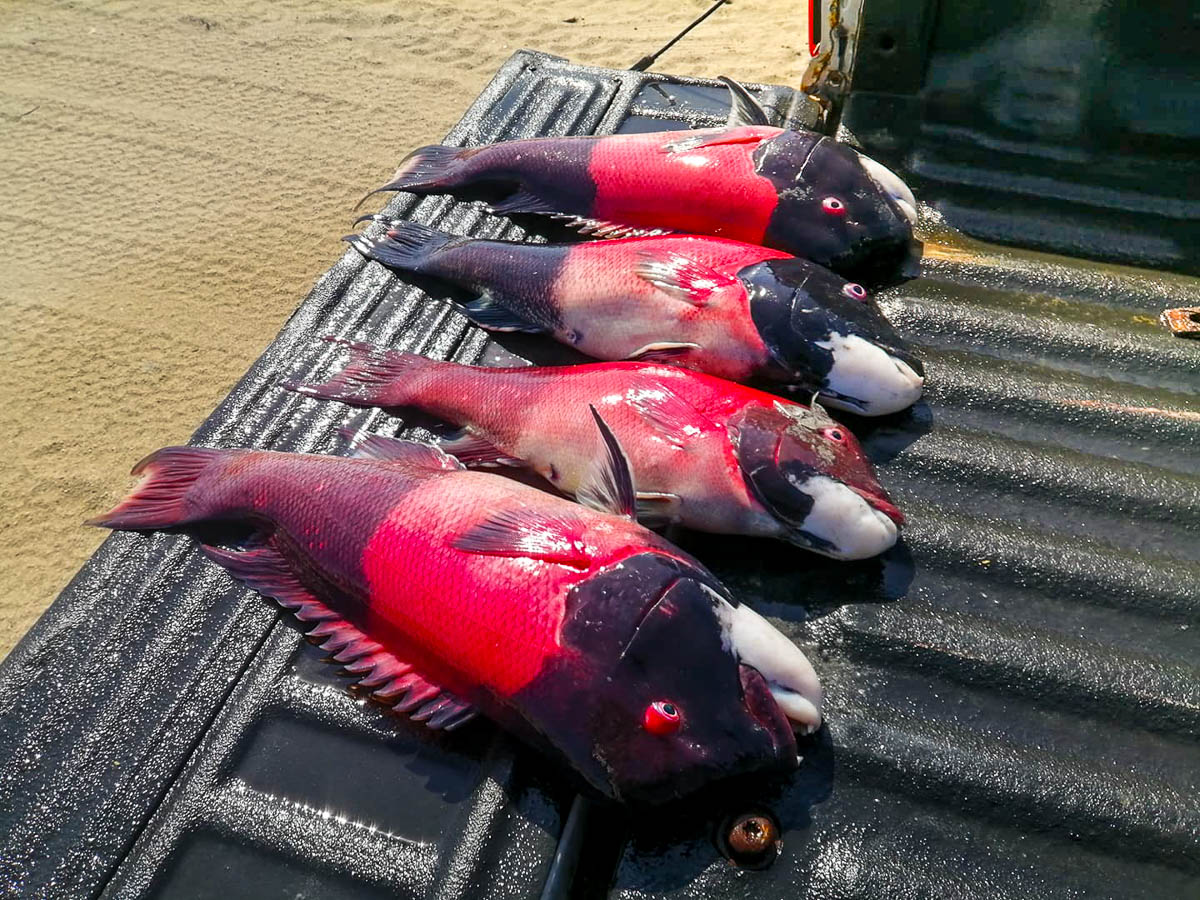 I wrangled up some goats this morning. Kept four of about a dozen that I landed.…Ross Zoerhof 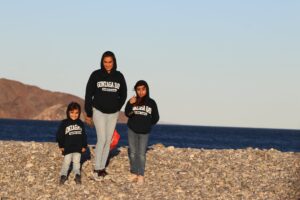 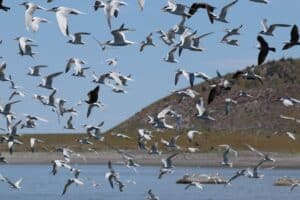 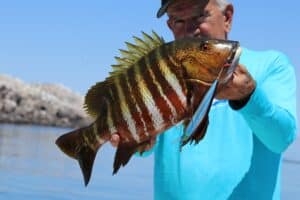 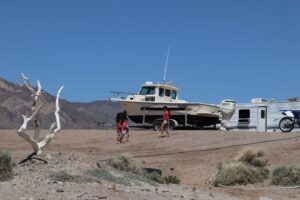 Out for a late afternoon drive over to La Gringa; it was a beautiful day – warm and windless, and I found lots of feeding birds and fin bait near shore. So, there is lots of bait moving to the area; I’m sure this bait will be followed shortly by big schools of yellowtail as it happens here in BOLA every season, almost like clockwork.
Stay safe and be well, and I hope to see you down here shortly!…fishonnn&onnn, Juan Cook

The Los Cabos Tourism Trust (FITURCA) announces a dynamic five-phase plan for the reactivation of tourism in the destination, in the midst of the COVID-19 pandemic. In addition, strict health and safety protocols will be incorporated that will be applied throughout the travel industry and service providers once the reopening begins on Monday, June 1.

“The way we travel may have changed, but the experiences in Los Cabos are still unique. The goal of the phased revival is to systematically allow hotels, timeshares, and service providers to resume activities while protecting the health and safety of the community and travelers, and to prevent the resurgence of new cases of COVID- 19 ”, pointed out Rodrigo Esponda, General Director of FITURCA. The Tourism Trust also confirmed that 62% of hotel inventory will resume operations, while international airlines such as Alaska Airlines, American Airlines, Southwest and Delta have already announced a return to destination.

The phases and the timeline that are projected to resume normal occupation levels in the new post-COVID-19 era are described below:

Phase I – June: Travel activities will be resumed with a limit of international and national arrivals. Service providers in the sector will focus on the implementation of health and hygiene protocols

Phase IV – October to December: return of luxury travelers and groups, as well as visitors from Canada and the United Kingdom. Recovery of 60% of the reserves projected by EOY.

Phase V – first quarter of 2021: restoration of 60% of air connectivity together with 80% of reserves.

To accompany the reopening plan, Los Cabos is implementing strict health and safety measures throughout the destination to ensure a safer travel environment:

Los Cabos is the main luxury destination in Mexico; receives more than 3.2 million travelers each year. 90% of the population of Los Cabos depends directly or indirectly on the tourism and hotel sector, which is the economic engine that supports 40% of the state’s GDP. As such, the destination is working hand in hand with local and state authorities, hotels, and partners to comply with all safety protocols and ensure the well-being of all travelers.
Loreto

The “virus, no work, no money” thing is putting more boats on the water to do food fishing. No tourist permitted boats are allowed, but the few commercial-permitted boats can fish and use the boat ramp.
North of town and close to the Coronado Island is where you’ll find the shore fishing and motorless tin boats harvesting up triggerfish. The reports from some of the commercial guys point to more good quality fish returning to the spots that get the most fishing pressure. More and bigger fish can be found on the spots that have been very dry previously. Punta Colorado and the Rock Piles nearby have been thick with yellow snapper and pargo up to 20-pounds.
It’s prime yellowtail time and the start of surface battles with big cabrilla. Marlin and dorado will soon follow, and here we sit for a few more weeks! 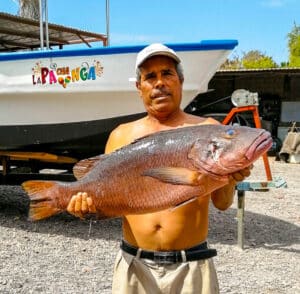 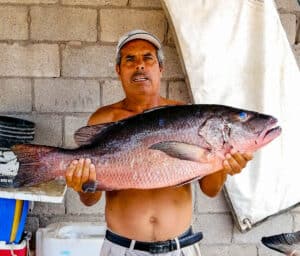 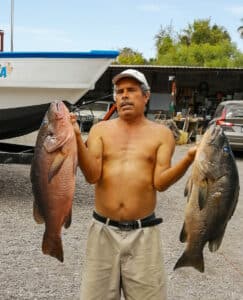 Juve Orozco managed to nail snapper and pargo. It didn’t take long to spread the fillets around to some of our neighbors in hard-hit Miramar…Rick Hill, Pinchy Sportfishing
La Paz
…Jonathan Roldan, Tailhunter International
East Cape 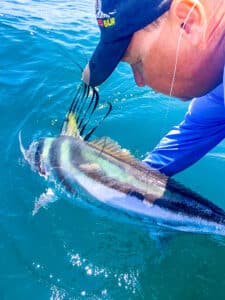 They are starting to show up! Are there mullet in the water? Chasing mullet already? …The Reel Baja, Jeff DeBrown

Puerto Los Cabos
I figured I’d share a pic from today in Cabo. I sight-cast to a couple of these Colorado snappers with my 8-pound rod in 18-feet of water in sight of my house. 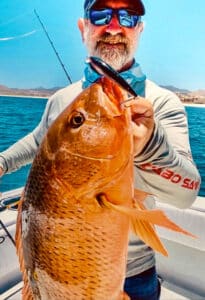 A dozen roosterfish and toro made for an awesome half-day of fishing. When you’re ready to come back … please come back! …John Domanic 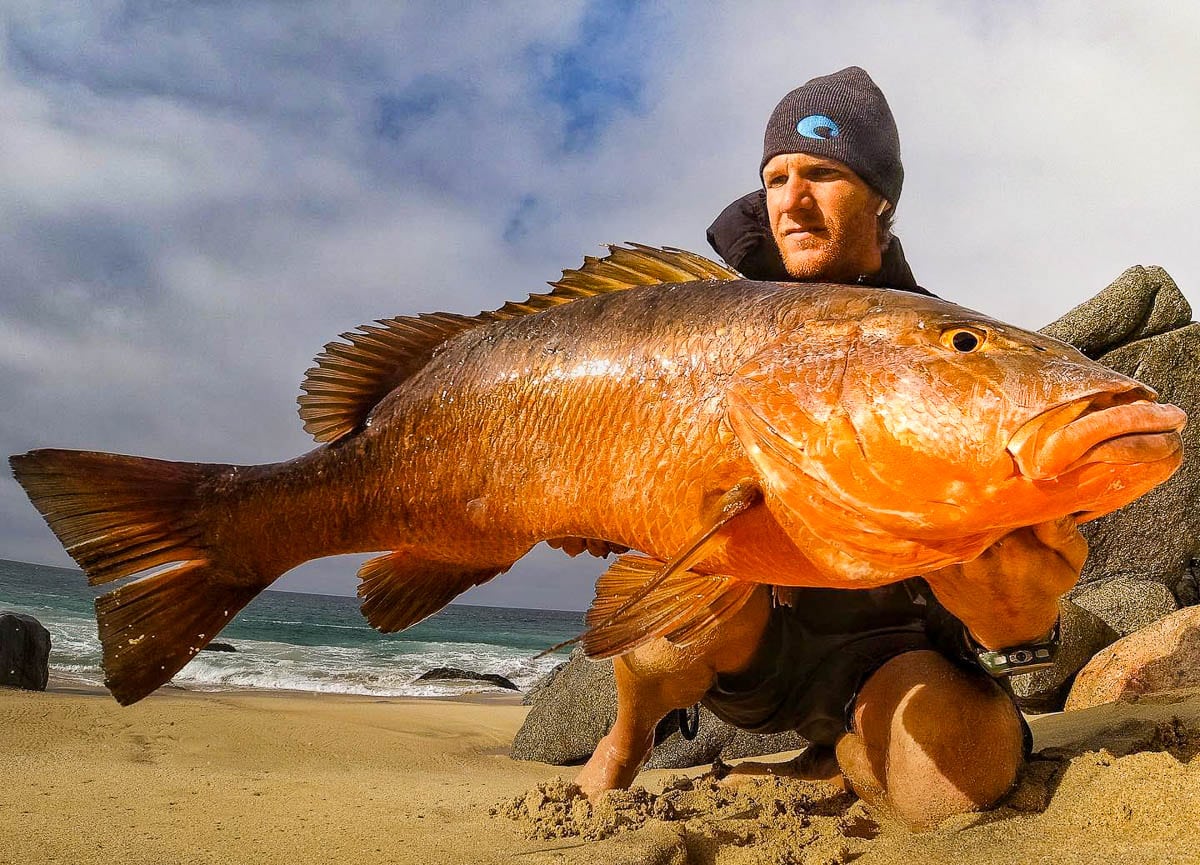 I had a fun morning fishing with my Dad, Nick Brough, and we caught a bunch of jacks…
It made me reflect on how thankful I am for life and the place I grew up, and for the passion I have for the sport. Crazy to think that when my Dad was my age, he was climbing and fishing these same rocks! What a BLESSING to be able to share this with him now and, in the middle of this crazy mess, make more lasting, encouraging memories…Wesley Brough, Cabosurfcaster 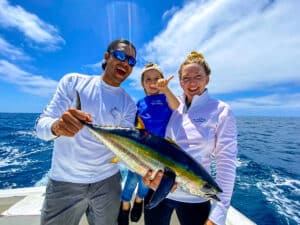 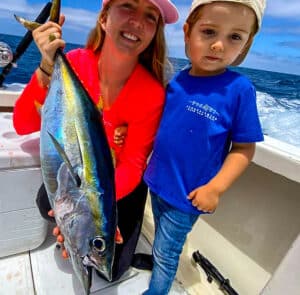 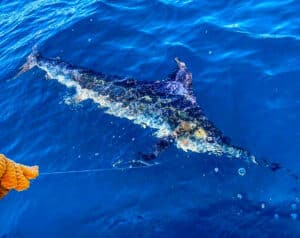 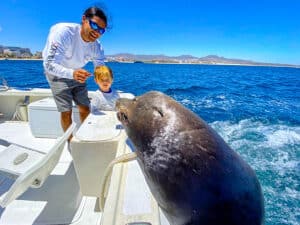 Three of the crew headed out on Pisces 31-foot Rebecca with Captain JR at the helm, and they spotted this feisty stripey close to the 1150 Spot. A nicely-cast live bait by Captain Bruce Montaño, a few moments of patience, and it was on! Plus, perfect sunny Cabo weather was the cherry on top.
UPDATE: Looking forward to when we can be heading out with all of you, too, which is now growing closer than ever! The first of the hotels are opening in Cabo on May 30. By mid-June, 60% of the hotels will be open.
We are proud to say that the State Health Department has been incredible during this time, as have the Hotel Association and business owners. We have undergone extensive (virtual) training for reopening Cabo to make sure everything is as safe as possible and with the best service. Close to 1,000 businesses and individuals attended the first training this week, and we’ve completed three more training modules since. We can say, without a doubt, Cabo will be the best-prepared tourist destination there is…Rebecca Ehrenberg, Pisces Sportfishing 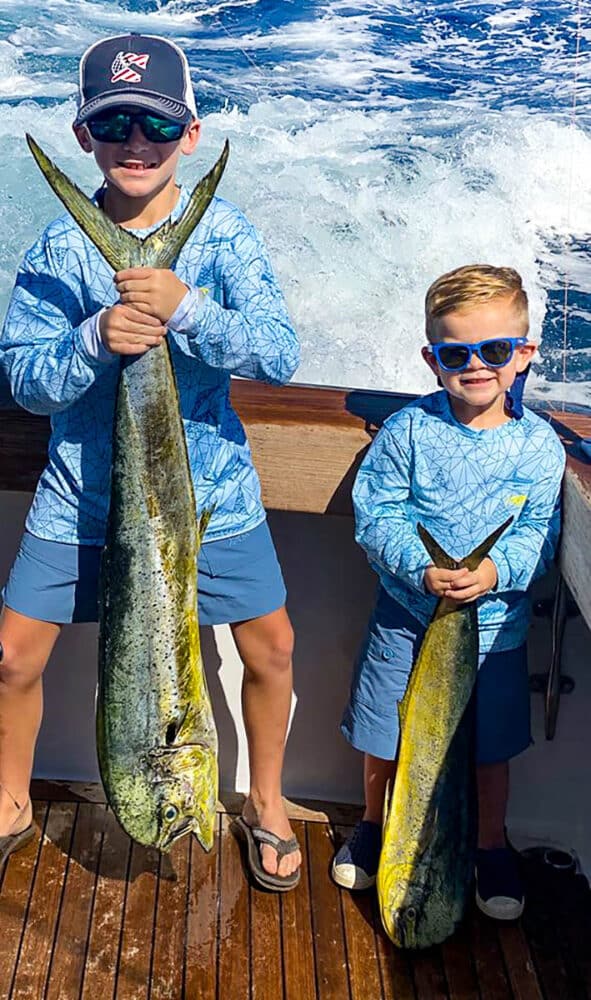 So the question on everyone's mind is whether BOLA will be open and what are the chances of getting sent back that the various check points?
Reactions: Alex Sakai and repo805
Upvote 0
G

I just read it. Continue solidarity ect. Yikes! #WHO# Those poor folks down there. I'm pretty sure that they aren't getting $600 a week on top of their unemployment.
Reactions: Baja Bytes
Upvote 0

I guess like Socal, with Baja the key word for opening is SLOWLY. Opening up
everything for business=no bueno until the Virus rate starts going down. GOOD
the people of Baja/Socal in some cases can garner some income. BAD if opening
up too soon causes the Infection Rate to go off the map again. News at 11.

ONE THING FOR SURE.....THERE'S A WHOLE LOT OF NICE FISH WAITING!!

Wow. I can't beleive cabo is opening that slow. Maybe for the best but 2021 before tourism starts again? Crazy. That's going to hurt the many awesome people of BCS.
Reactions: repo805, [email protected], Iron Mike and 1 other person
Upvote 0

Yesterday Mexico News Daily, hard read but I believe it says by next Tuesday phase 1 & 2 will be explained, emplimented.
Reactions: jer dog
Upvote 0
Show hidden low quality content
You must log in or register to reply here.