Weather was still up from the front that moved in on Thursday. 10-20kts and 7-12ft out at the banks. Capt. Greg made it clear this was a bluefin or bust trip, so we pointed it west and started the 8hr ride out to Tanner. I had my gear dialed in by 10am. After lunch I hit the rack and slept as much as could, knowing we would be flat falling all night.

We arrived on the grounds around 730pm and started looking. Justin Ryan took the wheel around 930pm and had us over fish all night. We made numerous stops from 930pm -3am dropping jigs on sonar marks. All for nothing. I caught some sleep from 330-5am .

First grey light stop on a good school around 530am. While most are still fishing the jig, I decided to go to my confidence rig. 60lb sinker rig with nose hooked sardine. Around 730am I’m fishing on the bow with Justin, who’s dropping a Colt Sniperish jig for fun. He says to me “Kenji I think I’ve got your line”. We both look at my line and it’s slowly running to the side of the boat, away from Justin, “Nope…it’s not me…you’re bit”. I ease it into gear and yell out the first of the trip “Biiiter!!” The fish immediately dumped ¾ of my spool, never looking back. After 10mins I get it turned back towards the boat and gain some line back. For the next hour it was a non-stop slugfest. I got spelled twice for water and both deckhands also struggled to gain line, maybe putting 30-50ft back on before handing back to me. After 1.5hrs I had the fish up and down, but still 100ft out. Justin had ended his shift and was sleeping by now, so Greg came out of the wheelhouse to lend a hand. We were positioned in the bow for the final stand-off. Over then next 15mins Greg pulled inch by inch of line back onto the reel, with his bare hands, all without breaking the 60lb Flouro. Right when I though I was gassed again, he says "45 more seconds and it’s dead". Sure enough 3 gaffs went in and it was over. She taped out at 159lbs and scaled at 157 at the docks.

This was the most grueling battle I’ve ever had. The combination of the lighter gear and a bruiser BFT that didn’t wanna die was something I’ll never forget. That being said, toward the end of the fight we had the drag set fairly tight and Greg was really pulling hard on that fish the last 30-50ft. I have no doubt the kit would handle a fish over 200lb. For the gear heads, the kit was my Phenix Hyrbid 7802XH rod, Makaira 15T, Phenix 80lb hollow braid, Seaguar Premier 60lb leader, 2/0 Charlie Brown hook. She is now nicknamed the BKOD, Black Kit of Death!

After pics and high fives, I went through my glory routine. Hit the showers, fresh duds, cold beer and moped around the deck for a few hours. Cruise control the rest of the trip..

Besides my fish, two others were landed that stop, both 150-175lbs. The bite was off the remainder of the day with only two other fish being caught on sinker rigs in the evening.

That night the routine continued. Justin driving and hunting fish all night. The entire boat (except for me, I like sleep..) continued to drop and grind flatfalls into the dark. I woke up around 130am and found only two guys still grinding with Justin on deck. 3am I here one hit the deck… someone yells into the bunk room “They’re biting, I just got a 80lber!” All hands on deck and jigs dropped, two more fish get hooked. One made it to gaff, a 150lber and one was lost at gaff due to user error. The greenhorn angler had the fish boat side and called for the gaff. As Justin runs for the gaff, the angler pulls the fishes head out of the water and allows it to thrash on the surface, tossing the jig and losing the fish. After the smoke clears, it’s revealed Justin was the first to hook up the 80lber and handed off to the passenger. Not surprising…

Rinse and repeat… Greg back on the wheel. Not nearly as much sign of fish today. We covered a ton of water from south of Cortes, up the west side of the banks, back down the east side of the banks, across the SW corner of SCI and back east toward SD. No bites on the sinker rigs or kite today. Very slow..

The crew didn’t give up and they stopped multiple times on sonar schools, up til midnight. Greg made the call to head into port and called the trip. 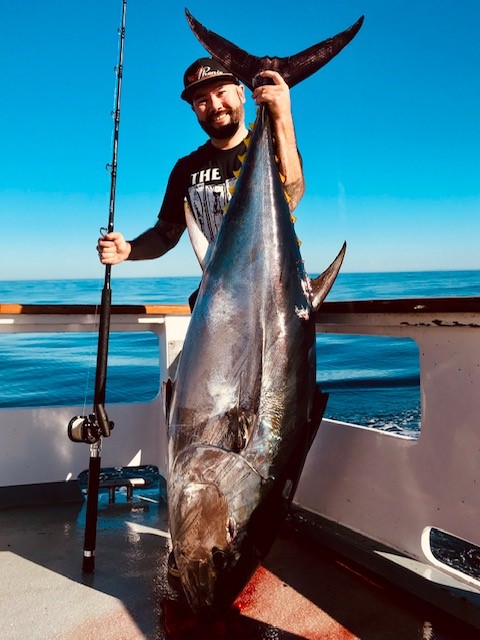 That, sir, was a terrific report.
Thank you
Reactions: krnju
Upvote 0
T

Boat
The Big Ones

Nice report! Congratulations on that fish. Good one for sure!
Upvote 0

Nice story telling and what a catch on that gear!
Upvote 0

Aztec is a fishy boat for sure!
Upvote 0

Congratulations on a great catch and thanks for the well written report! But honestly, IMHO I think you slept too much after the nice catch; you had today and the rest of the week to catch up on sleep at work

Congratulations on a nice fish

What size weight were you using?

How deep do you think you were when you got your bite?

thanks for sharing
Upvote 0
K

Why wasn't the fish gill and gutted before going into the hold? You stated a difference of 2 lbs between boat/dock weight. If the fish was gutted and gilled, your fish was pushing close to 200 lbs.
Reactions: streetnfish
Upvote 0

What size weight were you using?

How deep do you think you were when you got your bite?

I was using a 6oz weight, because there was very little current. The fish were marked at 240ft. I had hit the zone and didn't get a bite, so I was fishing the wind in. I was almost to a full spool when I got bit, so the fish must of been 100ft or closer to the surface.
Reactions: muletrain
Upvote 0

kevina said:
Why wasn't the fish gill and gutted before going into the hold? You stated a difference of 2 lbs between boat/dock weight. If the fish was gutted and gilled, your fish was pushing close to 200 lbs.
Click to expand...

It was not gilled and gutted. They only bled it out.
Reactions: Bill W
Upvote 0

Awesome report. I am heading out this Sunday for a 3 day on the Aztec. Good to see the sinker rigs were putting in some work. Definitely have to work for the fish but all the more fun when you do land one. How was the kite doing?
Upvote 0

Weather isn’t looking pretty at all on Monday. We shall see what happens
Upvote 0