Take your pick! Big yellowtail and white seabass over 30 pounds, trophy grade calico bass, fat halibut, chunky California sheephead, or even huge black sea bass. They are all on the chew in the rich waters surrounding Isla Cedros right now, and they are waiting to be caught by one of the lucky anglers who are visiting the Island.

Creighton Seiders made the trip over with his dad a few weeks ago and enjoyed a father and son fishing trip that exceeded their expectations.

Seiders reports, “The fishing was excellent for Bonito, Calico, and Yellowtail. The calico fishing was great in the kelp beds, and the fish were eating the Nomad Design Madscad stickbait, the Sp Minnow jerkbait, as well as mint color and mackerel-patterned surface iron.”

He continued, “We also limited-out on yellowtail two days out of our four-day trip. We were catching the yellowtail under flocks of diving birds and showed a preference for the Madscad stick baits and Colt Snipers. Overall, however, the speckled white Salas 7X and Starman 112 surface iron took the majority of yellowtail on our trip.”

Seiders concluded his comments by saying, “We also caught lots of bonito, and they would eat anything that we threw at them! The setups that we used were the Torium 20 with a Calstar 90J, Saragosa 6000 with a Phenix Abyss, 2 Lexa 400’s, and Daiwa Proteus, Lexa 300 with a Phenix Maxim, Revo Beast 40 with a Phenix Maxim. We used 40-pound leader on every one of our rods.” 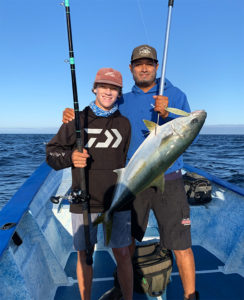 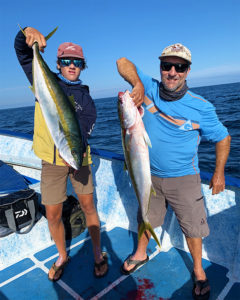 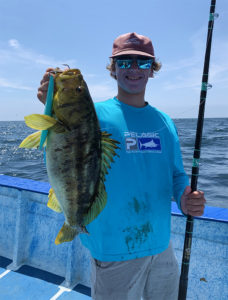 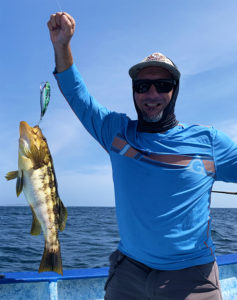 Alan Babin and his buddy, George, from Whittier, had both fished Cedros Island on previous occasions, but just enjoyed one of their productive trips during our season opener. This week, he shared a few of the photos from their visit a few weeks ago.

In addition to several trophy-grade calico bass, fat California sheephead, and a sweet 70-pound white seabass, the duo also nailed limits of halibut to 23-pounds and so many big yellowtail over the course of their trip that they eventually stopped counting them. 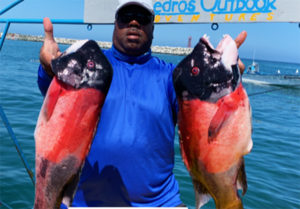 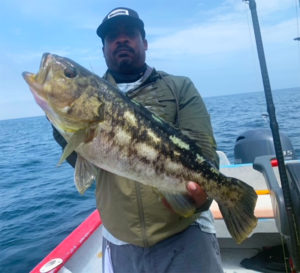 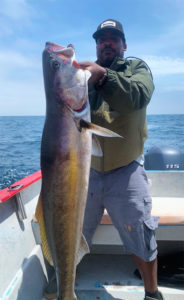 This past week has been extremely productive as well. Mario Kimble from San Diego and his party of 23 SoCal anglers had only been fishing 2 days on their 4-day trip to the Island when he reported that they were already scoring limits of yellowtail. Their biggest forktail to that point in time weighed out at around 30-pounds.

What was unusual about this catch was that instead of the big fish inhaling the typical iron or live mackerel, it decided to eat a white, plastic grub instead. Which, just goes to show that, on any given day, the fish around Cedros Island are likely to eat just about anything that looks as if it might be tasty.

In the first 2 days, Kimble’s group had also taken 6 California sheephead weighing up to 20 pounds on chunked mackerel. However, their biggest surprise came when they caught a 50-pound black sea bass on surface iron since these fish are generally caught at much greater depths.

Also in the middle of their 4-day fishing adventure, Mark Kosmowski and his party of 6 had already taken over 20 yellowtail and limits of California sheephead, in addition to calico bass between 4 and 8 pounds on plastics off the Island’s north end. Kosmowski concluded by reporting that their biggest fish so far was a 60-pound black sea bass taken on a live mackerel that was sent to the bottom on a dropper loop.

Although the fishing action at Cedros Island is on fire right now, it is still only the middle of August. And, as the water continues to warm and the tuna and dorado begin their seasonal migration up the western coast of the Baja peninsula, things will only get better for visiting anglers.
Reactions: Tunahead, Jose Caballero, clean n up and 3 others
Upvote 0

Great report and pics. Miss those years gone by 4-6 day trips to Cedros. What a fishery.
Reactions: ZZZZZ
Upvote 0
Show hidden low quality content
You must log in or register to reply here.