Anyone want to Help Build a little Skiff?

Anyone want to Help Build a little Skiff? Health Issues prevent me from finishing this project.

It would be great for Fishing fresh/salt water and Duck Hunting.

I have room to keep it in my yard and we can share it to play with.

the bottom deck made for a skiff that is "In Progress" Just needs a transom, sides and a bow.

It is two layers of PT Plywood with foam core between them and fiberglass cloth over the entire thing.

has grey indoor outdoor carpet on the top. I'm severely allergic to the chemicals in the PT Wood and Fiberglass

and had to stop building this boat. Right now the deck is 12 ft long and about 5'9" wide

We can make it as long and as wide as you like. I designed it to take up to 60 HP and it is strong

How are your woodworking and fiber glassing skills?

BELIEVE HALF OF WHAT YOU HEAR AND THREE QUARTERS OF WHAT YOU SEE.
Reactions: Manbat, landslide and hbouldin1216
Upvote 0

sea trial available?
Toggle signature
Better to do battle and lose than not to do battle at all
Reactions: Manbat and hbouldin1216
Upvote 0

The hard part is already done. You could float it like it is. may be a wet ride but fun in summer.
Toggle signature
Maine: Sure its Cold; But its a Damp Cold!
Reactions: Brian Bergquist and bus kid
Upvote 0

Oh, And I also have this "Bristol" Cabin where guests on board the Yacht will be able to relax, enjoy Cocktails and listen to the Piano Concert ( More like a Casio Keyboard Lounge Lizard, Harmonica and a Ukulele Player) I would trade for a Ukulele by the way.

Originally the plywood box was custom designed and built by myself, glued, screwed and tattooed to be used as a prototype storage box to hold 8 class I PFD's, a 12 man Offshore life raft, Survival ration supplies, Epirb, Offshore Flare kit and fire extinguishers. Yes! I made it large enough to hold all that stuff.

However: and there usually is, When we put it on the hardtop of my little Shamrock 246 to check for fit, it grew a tad larger than wanted. So now its sitting in my shed. Would make a dandy cabin for a duck hunting boat or home for some Goats.

Anyone have a use for it?

I really need to clean out my worldly possessions, Maybe if I flipped it over, added some Kindling & Beer I could ride to Valhalla?
I have 2 Crickets and a Pair of Dice, Pack your Bags and well Sail Tonight! 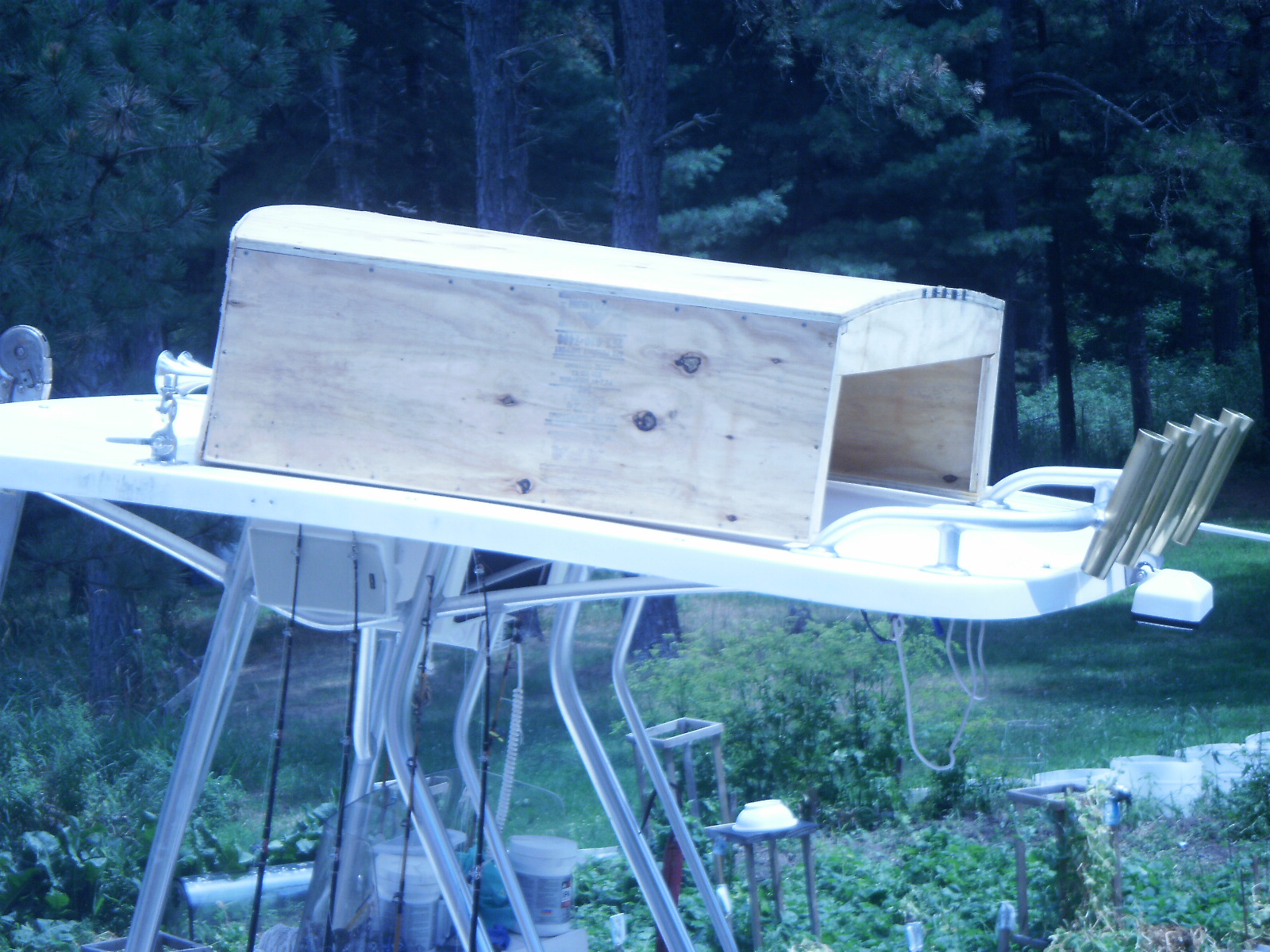 How does one design a deck to take 60hp?

tanner.s said:
How does one design a deck to take 60hp?

Sent from my SM-G925V using Tapatalk
Click to expand...

First you start with a 17 ft , 10 man Inflatable Zodiac style boat that has sectional removable floorboards and is rated for a HP of 60. I had a CMC T&T unit on the transom with a Johnson 60HP 3 cyl engine on it. Went like a Bat out of hell and was just plain crazy fun to blast offshore with. Only thing is that the flexible floor, well it Flexes. So I removed it and used it as a pattern for size but beefed up the specs by using a sandwich design of 3/8" PT Plywood for top and Bottom, longitudinal stringers internal and along the " lower Gunnals" and with a 2" Thick closed cell foam between it. then cover the entire deck with 10oz fiberglass cloth and epoxy resin. Seal the resin with gelcoat and its almost done.

anyway, the 60 HP was Way-Way too much fun for the Teenage Boy to use as the boat went 50 kts and inflatable dont have much of a keel and tend to skid around hairpin turns. so I took off the 60HP and Tilt and put a 25 Hp Merc tiller on it.

Some guy saw the boat and just had to have, made me an offer I could not refuse it but he wanted the sectional floor so he could store it on his Yacht on Cape Cod.

So I still have the bottom rigid deck. and think it would make a great little flat bottom skiff to put the 25 hp outboard on.

If you were starting fresh with a clean sheet of paper.( or Plywood, I would use Plywood as paper would not last once it go wet and you need Ducks to keep it from Flying Away)

The flat bottom only needs to be designed to float the weight of the motor (whatever size?? Chevy 502 would be fun!) fuel, and people and cargo. while at rest. I would design the displacement using 8 pounds per gallon as a start..

Once it jumps up on plane. ( ie: Overcome the initial resistance of the water which could be figured as high as 90 degrees plus the coefficient of drag) and then the energy needed to keep the Mass in motion will be reduced F=M*E at least that's what Newton said.

The length to width should be at least 1:3 ratio or higher, that worked well for the Herreshoff Brothers, but they built very different types of hulls.

A Simple Reference would be to use this Table as a Rule of Thumb and you cant go wrong,

Lots of Initial Stability, Really Crappy Dynamic Stability but with the proper setting a a bottle of Fine Wine you can go anywhere. 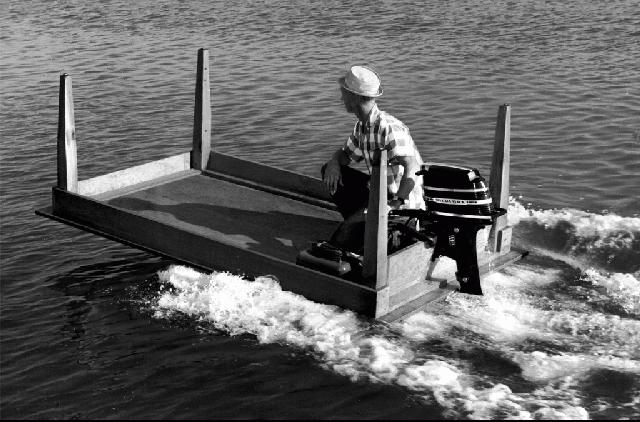 I'm Surprised no one asked how to build the Storage Box to go on your boats Roof. I like to use Glue & Screws.. Just build it like your making a model airplane only different. I have learned that people like to sit on top of boat cabin hartops to drink, watch the Whales, Meditate & Pray or whatever and Jump off to swim etc. Be sure to build them to accommodate at least 4 to 100 times the wieght that you expect. Just Call it Snow Load! Use the Arc to build strength the way the Romans did. I suppose if you built one for a US NAVY Surplus amphibious DUKW it could be called the "AquaDuck"
this is a dissection of the box before it came alive! Notice that I am Applying Wood Glue, allow it to tack up for a bit and then clamp and screw on the front plywood palnal to create the radius look to the box. There is actually 6 inchs of differance between the center and the sides.

Here is my first Attempt at a Plywood Hardtop on a 30 ft boat I used to have in Gloucester, Mass I also made Plywood Outriggers so we could carry a Dozen Sea Kayaks Offshore to Stellwagon Bank. Paddle with the Whales. The Hardtop lasted 2 years of hard use and gave up the goats.It was Painted Black to absorb heat on cold days, found that white actually was better looking when I made the second hardtop. I then build a bigger better one with more radius as like I said sometimes 5 or 6 people would be riding on the roof. It was made in about 1990 and is still going strong today. I sold that boat a long time ago. Have to see if I have any old pictures of the White Gelcoated Hardtop and scan them on the Comfuser. 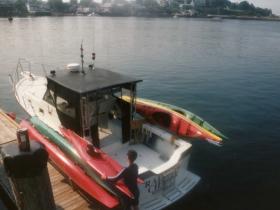 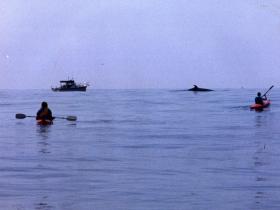 Easily quotes of the day, maybe someone from Washington could learn from one of them:


WickedGood said:
gave up the goats
Click to expand...

WickedGood said:
old pictures of the White Gelcoated Hardtop and scan them on the Comfuser.
Click to expand...

Toggle signature
"When you fly in the face of convention long enough, you no longer wonder why little bits of it hit you in the face"
Upvote 0

I have geneated many other Quotable Notions
Toggle signature
Maine: Sure its Cold; But its a Damp Cold!
Upvote 0
Show hidden low quality content
You must log in or register to reply here.