in Paradizzle.
There was a bad moon rising. 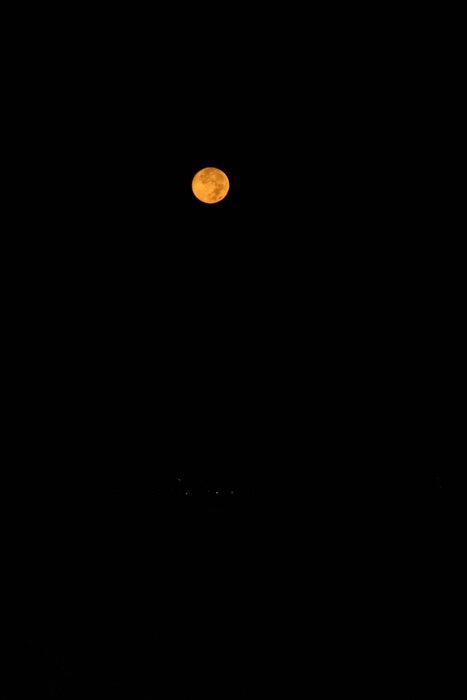 I ran from it. And stopped at Lake Biwizzle. I wanted to introduce my buddy Che to some frenz. I armed him with a SM Slammer, 7 inch wood big bait, with a Bloody Decks Tuna sticker on the bottom. You know, standard operating procedure. 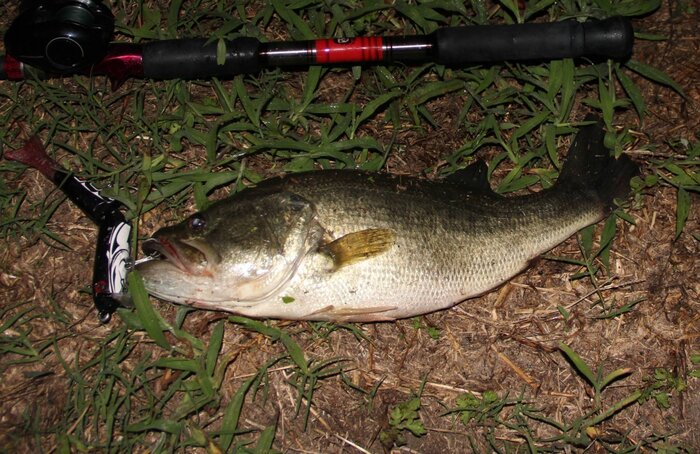 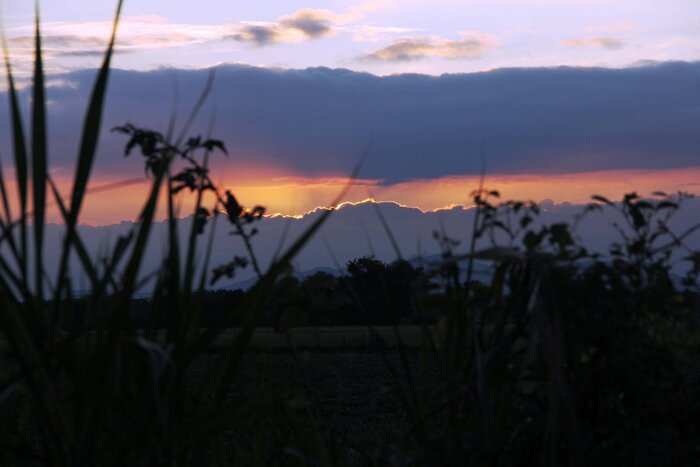 It started looking funky.
As did 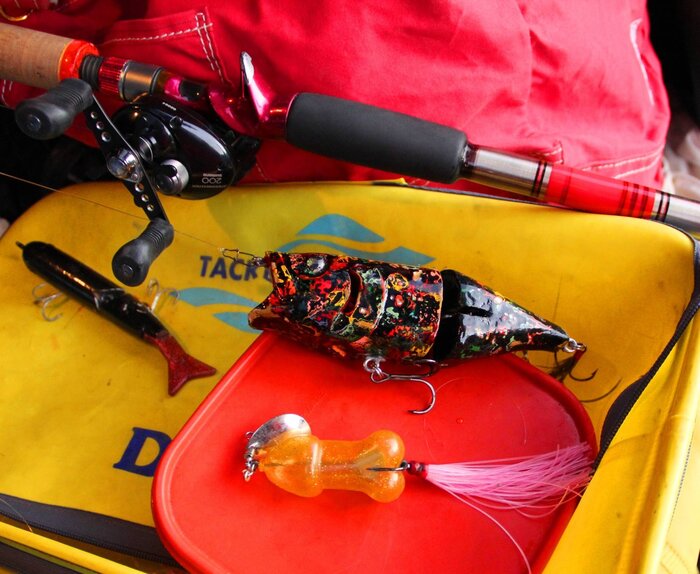 Some of my lures (the one at the bottom, with the pink-tickler belongs to the Sea Rapist, I swear).

I had to take a moment to clear my thoughts, and decided to bait up to spot X, which has smallmouth bizzle. 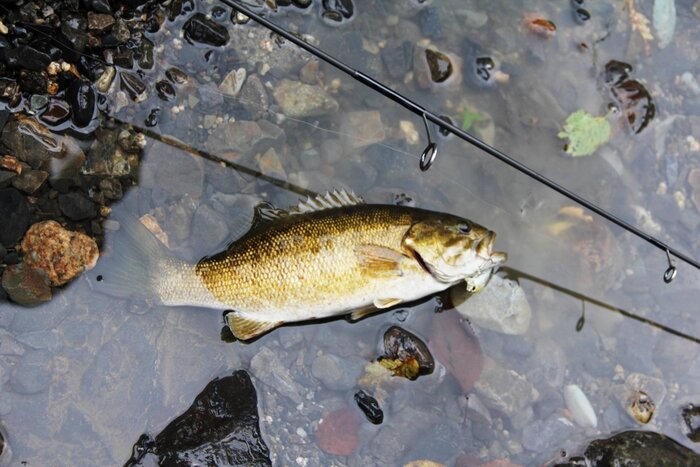 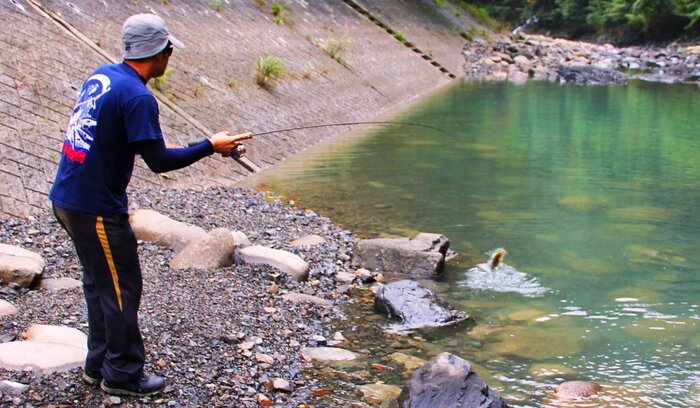 This man is a hero. He goes by "Scratch". He is special forces in Japan, and does hostage rescue and shit. He carries an MP5...and is a master at martial arts. The other day some crazed asshat held his wife and daughter at knife point, and he was called in. The perp freaked, and stabbed my buddy under his arm...where his Kevlar vest offers little protection...he drew a bit of blood...but he most importantly he saved the wife and daughter without firing a shot. He said is was nothing big, really, just his job. I would have emptied the MP5 clip, and then yelled "PUT DOWN YOUR KNIFE".
With the recent earthquake / tsunami...he was dispatched, and save more lives. 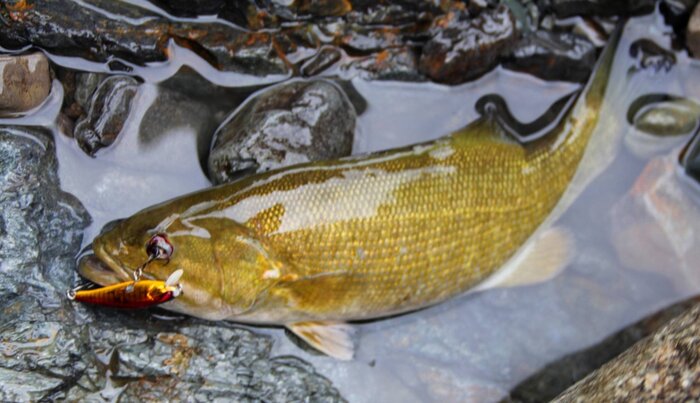 Ouch! My PB smallie for that river...

We moved to the backwater of another reservoir, and I took out my binos and glassed the area from the road above...lots of bait, and free swimming bass (largemouth....2 to 5 pounds)....I was ready to bust a move, when 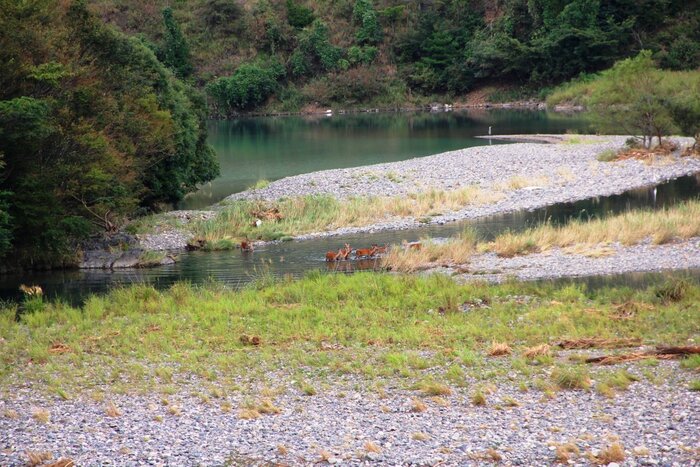 an entire bevy of wildebeests invaded my space, and blew out the spot...oh well... 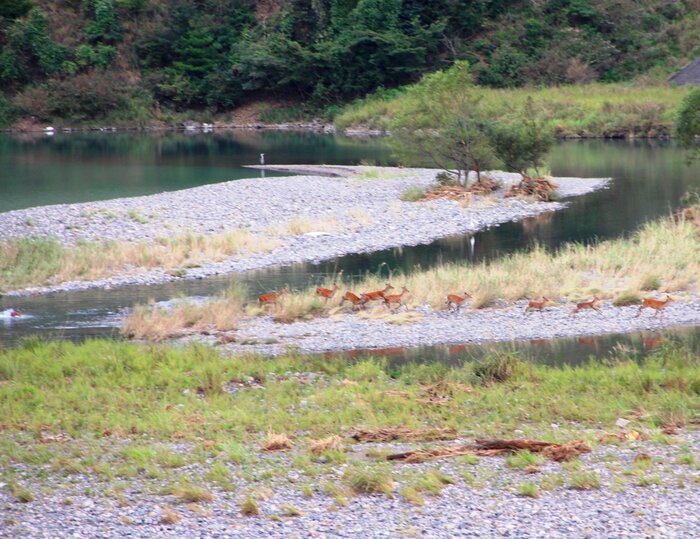 I yelled at the vile creatures, and they took off before they started messing with the wrong people.
Expand signature
[SIGPIC][/SIGPIC]
3-30-2011...Capt. G's Bloody Urushi. Often copied, but never fully duplicated.

Does the hook on that spinner get good penetration?

Jig Strike said:
Nice pics... what are the four dots in the moon photo
at the bottom 1/3 center?

Stars, boats on the horizon, UFO's?
Click to expand...

I doubt it was, and I do not believe it was a UFO.

There was a long, cigar shaped object , with rotating /spinning lights , hovering under the moon for three minutes....then it accelerated at a rate bigger than Chris Wallace, and dissappeared.
I was thinking---corvina!
Expand signature
[SIGPIC][/SIGPIC]
3-30-2011...Capt. G's Bloody Urushi. Often copied, but never fully duplicated.

have you ever slayed with the pink tickler mini dong bait?

The CHE is acutally a weave, made from think thread. I was made by world class weaver Mr. Owen Dare, and is worth more than the entire rod and reel...thanks for the compliment...
http://www.bdoutdoors.com/forums/rod-building/356795-shout-out-grandmaster-owen.html

You are one wild and crazy guy. Great report. You should get paid for the entertainment value.
Expand signature
It's just a hobby

widgeon said:
You are one wild and crazy guy. Great report. You should get paid for the entertainment value.
Click to expand...

Actually, by the good graces of God, I do get paid for doing this (fishing thing).
I have been a professional fisherman, and writer for the past twelve years for mostly Japanese mags and newspapers (I do get published once in a while in USA mags).
But on here, I do it for for fun--I like the interaction with you guys...and your comments make it worth while for me to continue (except for the ones that say "Capt . G., you suck donkey balls").
Expand signature
[SIGPIC][/SIGPIC]
3-30-2011...Capt. G's Bloody Urushi. Often copied, but never fully duplicated.

Brings to mind the timeless adage... If you love your job, you'll never work a day in your life. Or something to that effect.

BTW, I'm fairly certain that I coined the phrase "You suck donkey balls".

Although don't recall ever directing it at you.

Expand signature
It's just a hobby

Did you get the mold of the lure "with the pink-tickler" from one of those hard candy rings you purchased when you were fishing in the San Francisco area on your last visit to the states?
Expand signature
[SIGPIC] [/SIGPIC]

Did you get the mold of the lure "with the pink-tickler" from one of those hard candy rings you purchased when you were fishing in the San Francisco area on your last visit to the states?
Click to expand...