Headed back to San Clemente Island this week with Jimmy Decker and Rob Kato. We ran to the east end due to Naval closures up west in the morning. Our plan was to fish calicos in the morning and then run off the island to look for tuna. The ride to the island was calm but much colder than expected. 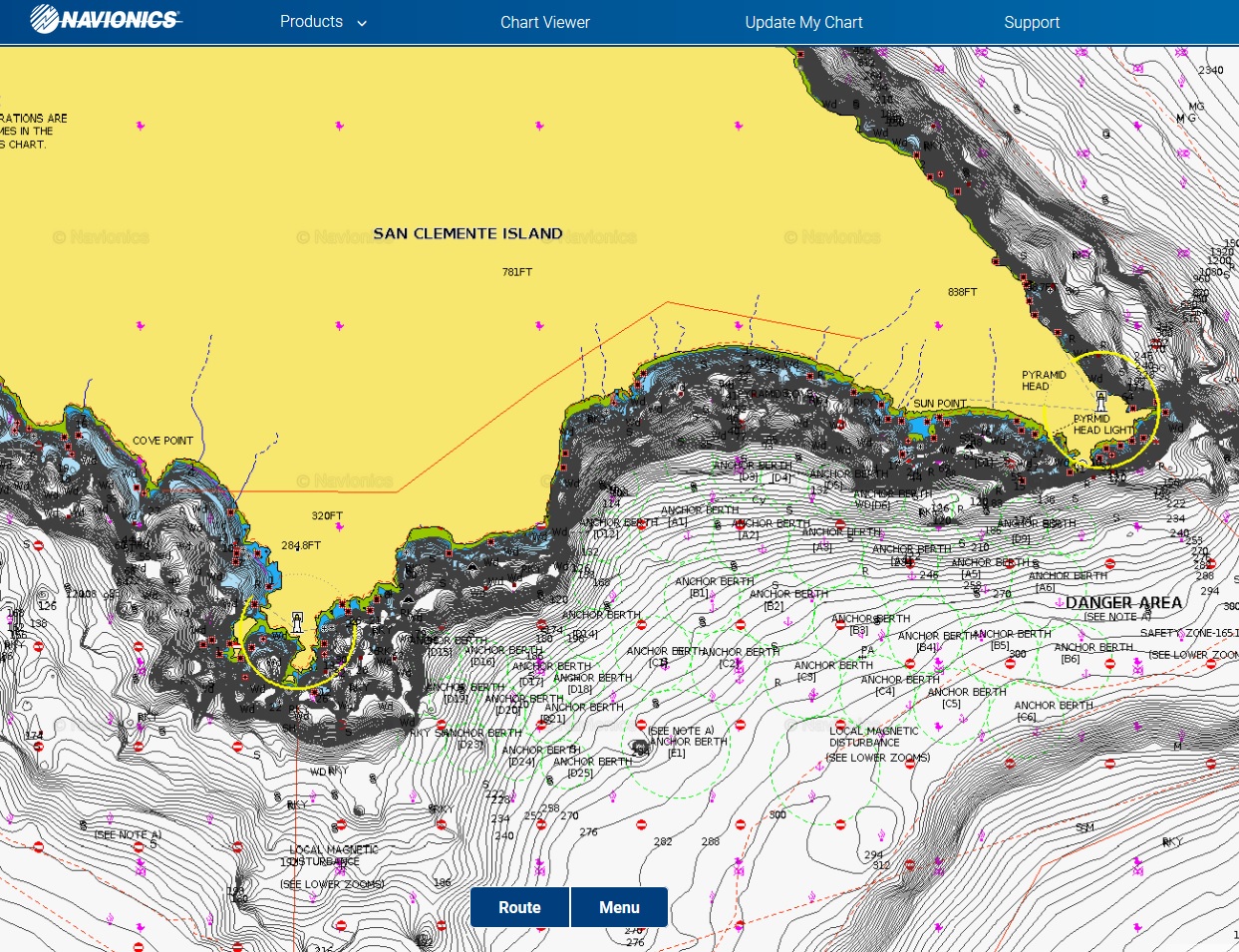 Started fishing right on the east end and worked our way up to China Point. A lot of guys drive right past this zone but there are enough spots in that stretch that you could spend an entire day there and not fish them all.

The fishing was on the slow side by Clemente standards but the average grade of fish was on the large side by Clemente standards. We caught about half of our fish in tight against the rocky shoreline and the other half in deep water kelp. When fishing tight, Decker spent most of his time at the wheel as he had us in some pretty sketchy spots. It was my first time fishing that part of the island with him and his knowledge of the reef structures and how they relate to the swell were obvious. At one point he had the boat sitting in a small gap between a breaking boiler rock wave and the surge along the shoreline. This spot produced multiple big bites including this one for Rob. 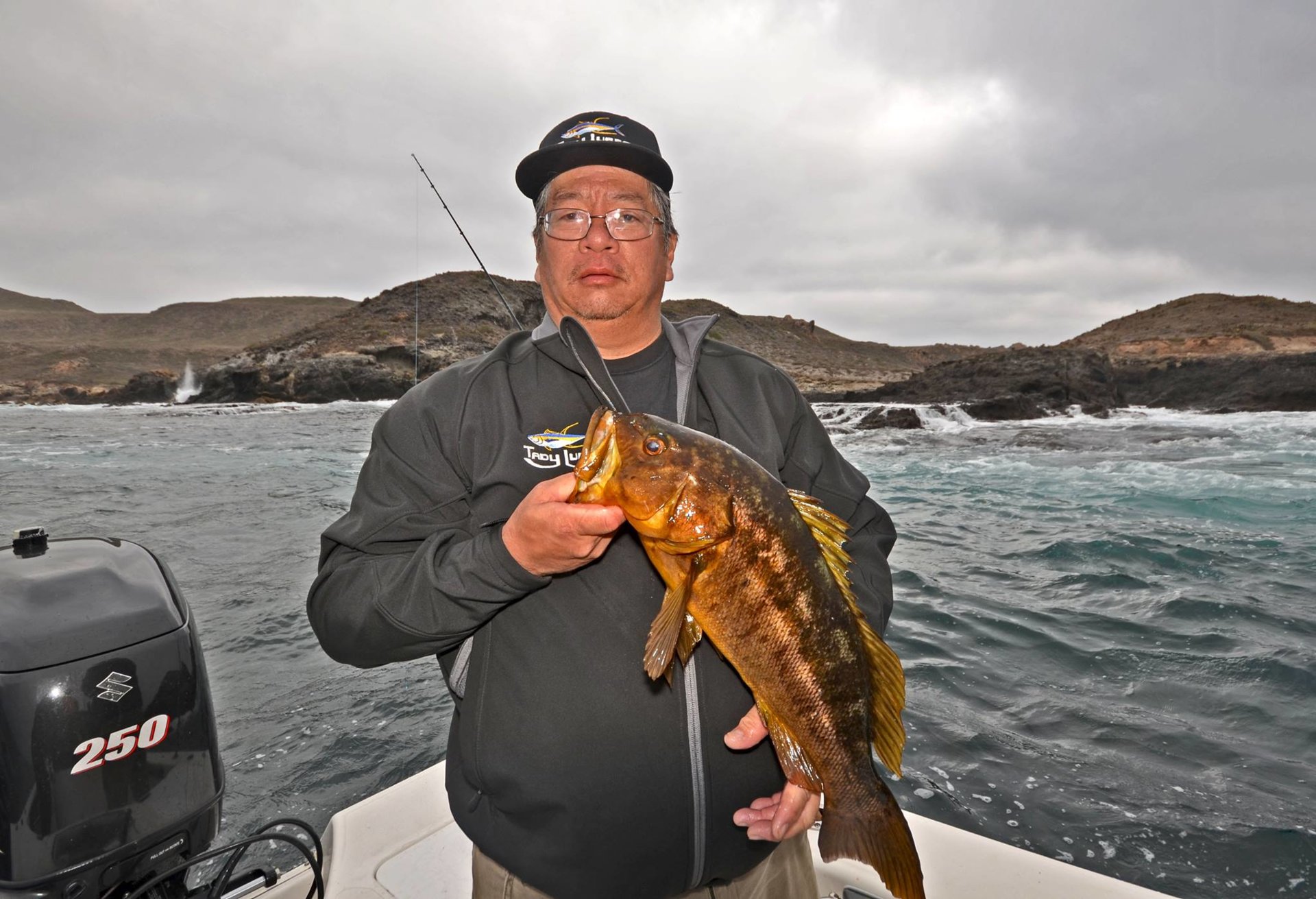 The Navionics chart has all of the exposed and submerged rocks marked in the area but if you're planning to fish inside I'd spend some time looking around on a calm day to get a feel for the layout of the area before trying it on a day with swell. The red arrows are pointing to the icons for rocks. You should try to avoid those whenever possible. 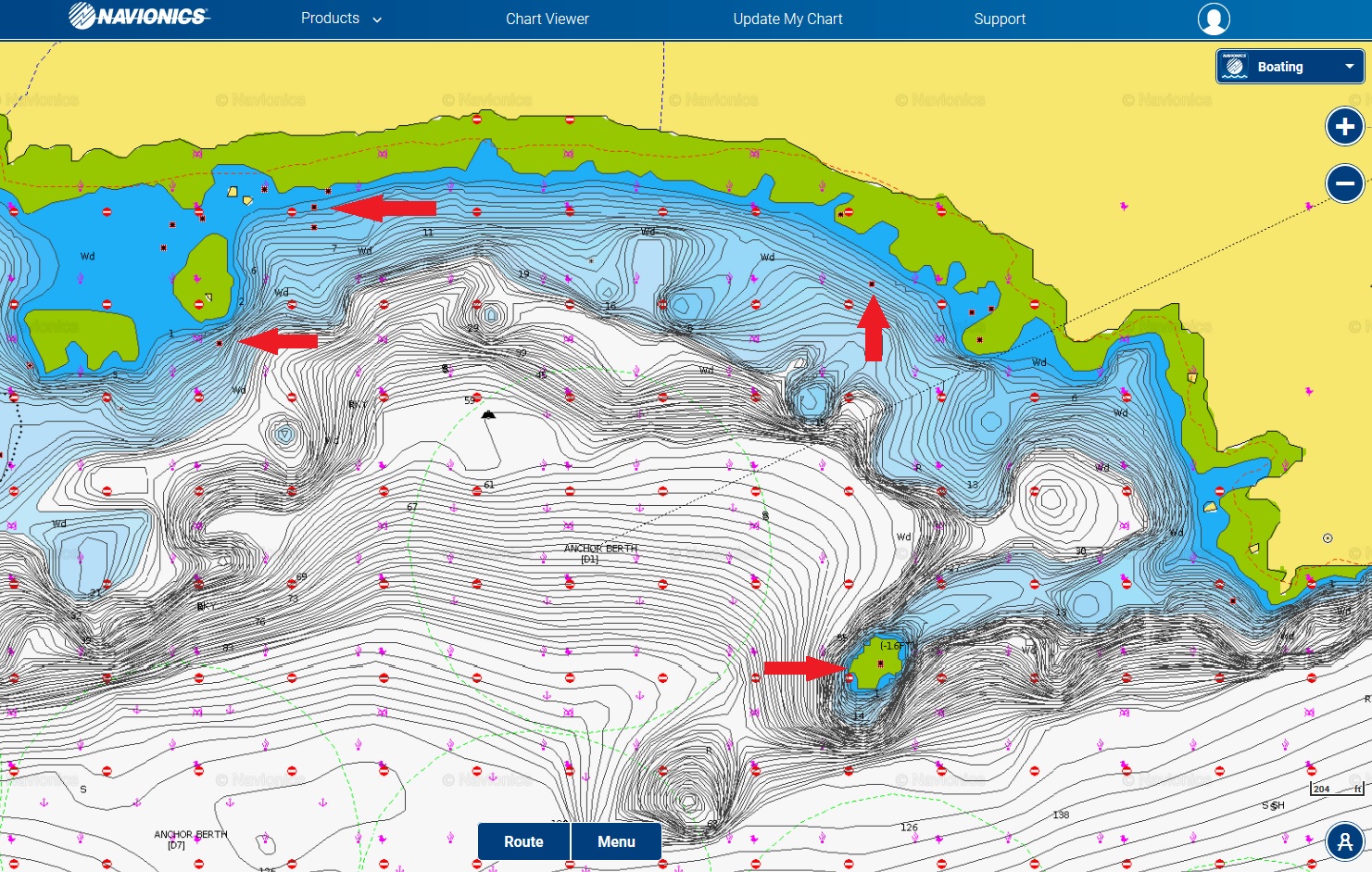 Later in the morning we found some kelp that had birds working on it and we ran over hoping for yellows. It turned out to be all big bass and we watched a group of 6 pound plus fish chasing sardines with their backs completely out of the water. Definitely one of the coolest sights I've seen in a while. Rob and I each got a nice fish out of that area, his on a Tady 45 and mine on a weedless MC Swimbait. 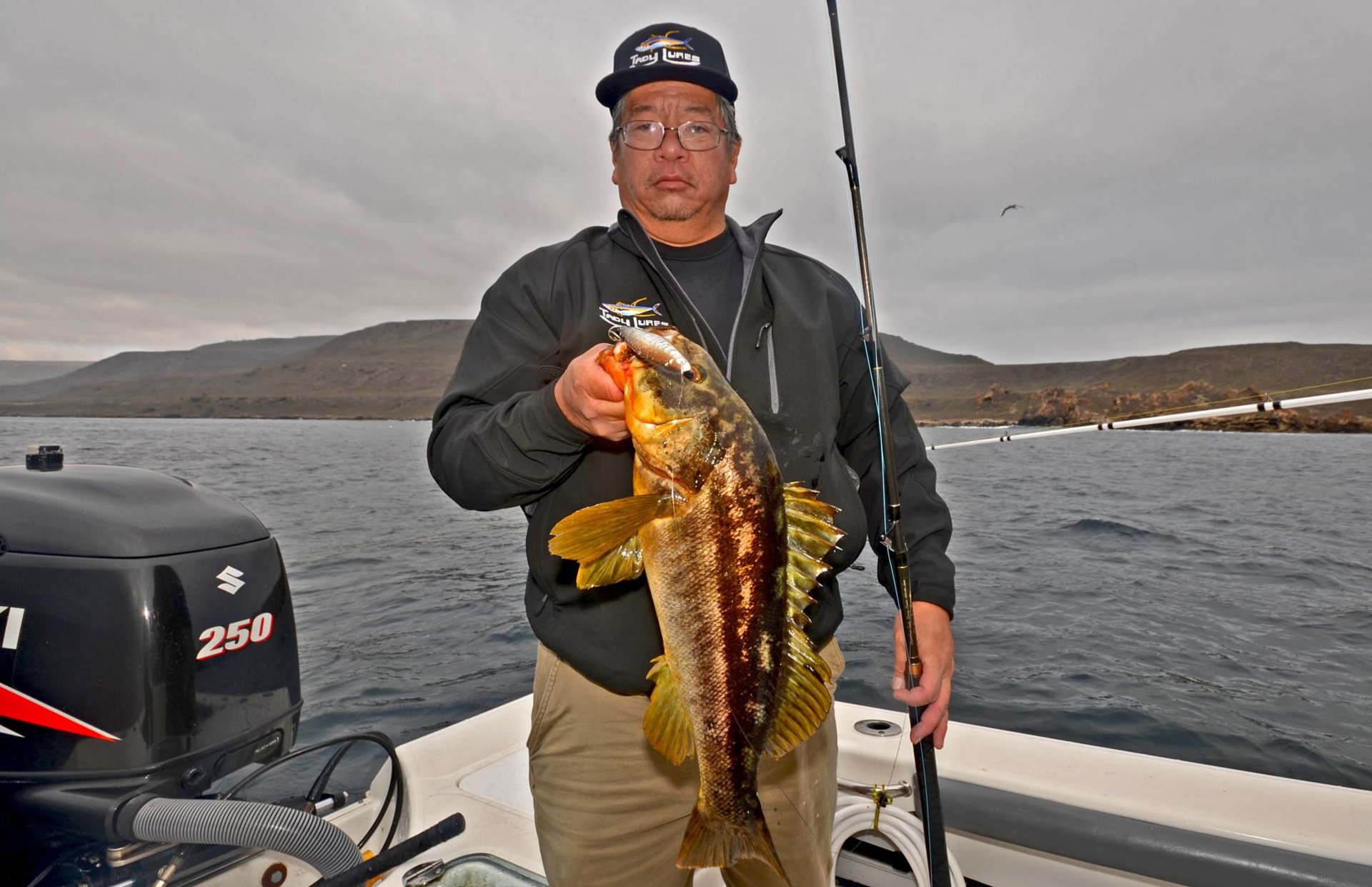 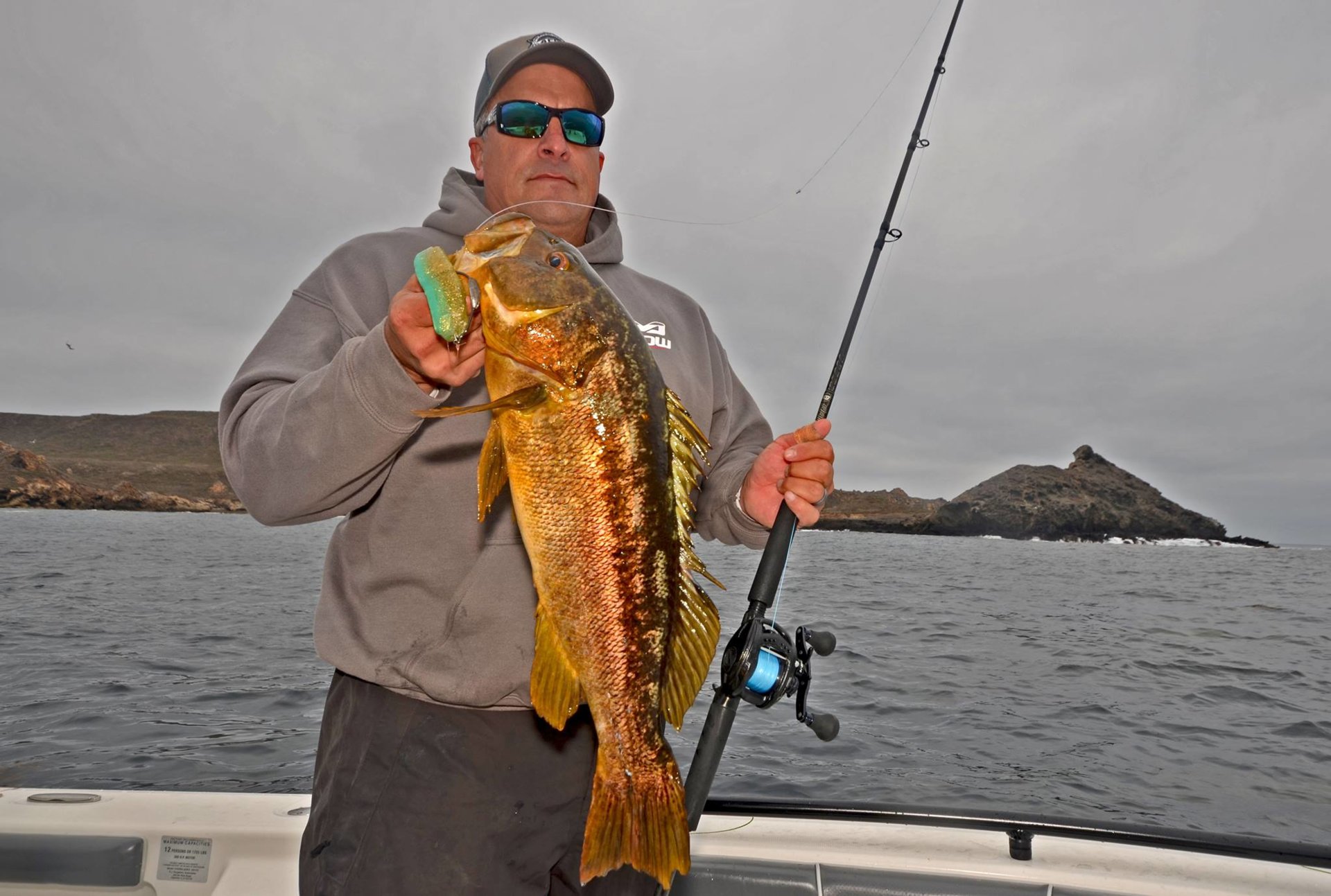 At noon we made the run out to Desperation but it was windy and rough enough that we scrapped the plan because looking around would include getting wet and beat up. Being the fair weather fishermen we are, we ran back to the island and caught some more bass, including another big one for Rob. 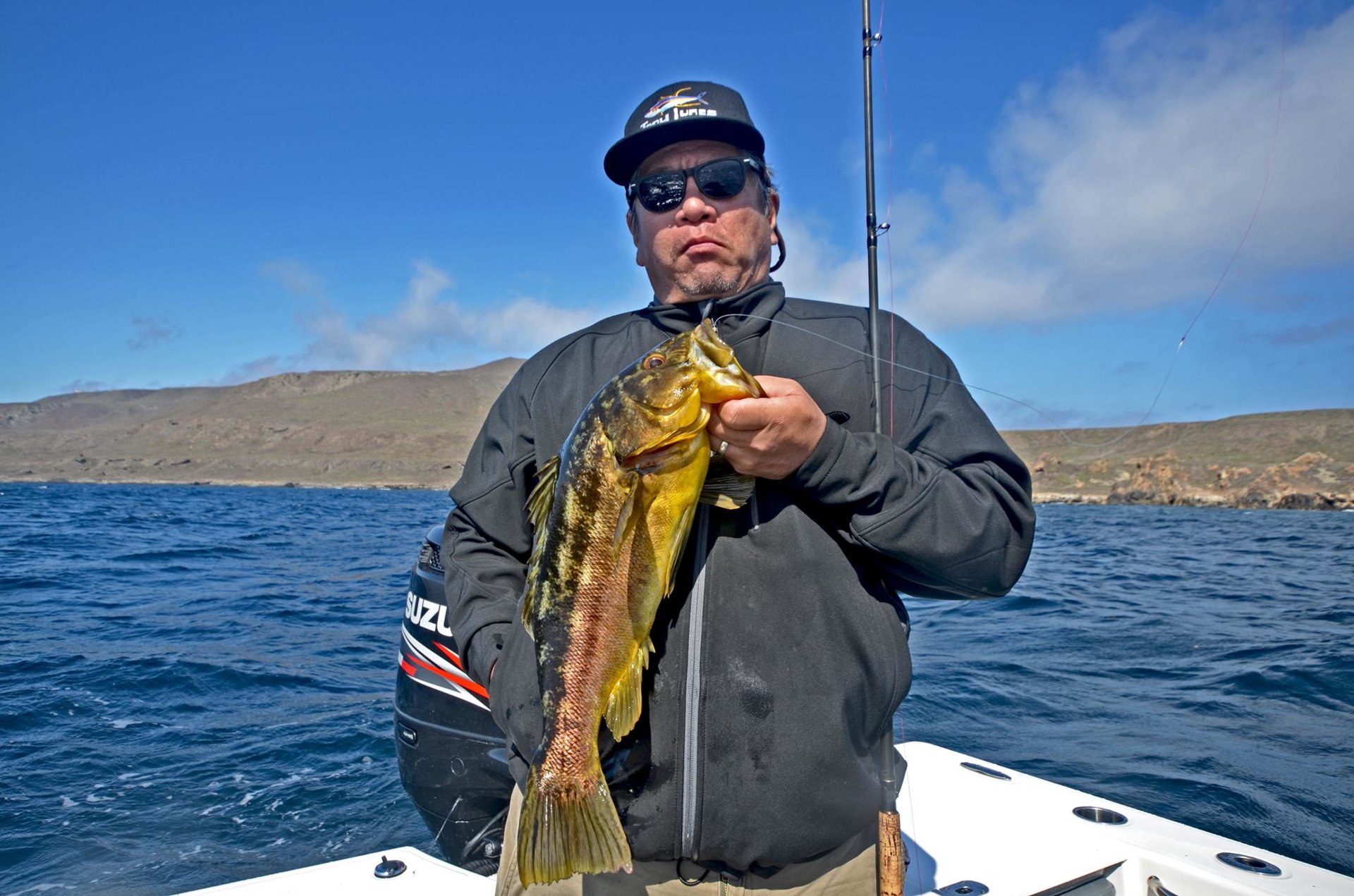 By 1:30 it was blowing 15+ on the back so we decided to bail and look for tuna on the way home since the forecast was for calm winds inside Clemente. Forecast ended up being 100% right and once we turned the corner we found grease conditions. Weather remained calm all the way home and we did find some dolphin that had tuna under them off the east end of Cat but couldn't get them to bite any of the lures we dropped down. The weather definitely felt like fall for the first time this year but we're going to try and squeeze in a couple more trips before winter sets in.
Toggle signature
Check out my weekly column

I’ve been lucky enough to get one of those spots marked by the red arrow go completely bonkers with a mix of small yellow, and clouds of big bass. Some of the most fun surface iron fishing ever. Great report as per usual. Thanks!
Reactions: get some
Upvote 0

Wonderful report and pictures Erik. Those are some big beautiful bass you guys got. I had thought about looking for tuna on Saturday between the Mack Bank and the 289, but unfortunately never made it out on the water.
Reactions: get some
Upvote 0

Nice work fellas, Rob looks absolutely thrilled!
Toggle signature
I CATCH IT. I KILL IT. I CLEAN IT. I DON'T DELIVER IT!
Reactions: get some
Upvote 0

"The red arrows are pointing to the icons for rocks. You should try to avoid those whenever possible."

Reactions: get some
Upvote 0

Smiles across the board.
Reactions: get some
Upvote 0

Good times. I like Kato. Great guy.
Reactions: get some and bparker1225
Upvote 0

Those bass are chunky! Good stuff. Saw you guys splittin as we were pulling into the area. We worked those dolphins for a couple hours and finally got 2 to hit a cedar plug and a black/purple feather. Wouldn't touch anything else!
Reactions: RyanErb and get some
Upvote 0

Boat
Cattle Boats from all over California

Lots of detail... Great fish report.
Thanks for sharing.
Upvote 0
Show hidden low quality content
You must log in or register to reply here.