Booked this trip at Fred Hall, and the time has finally come. Drove down to San Diego with friends John amd Mike on Saturday and stayed at the Best Western. It was nice to not be in a hurry or rushed. We had dinner at Mitch's, then did some last minute tackle purchases at Fisherman's before calling it a night.

Up early Sunday morning went over to H & M, to check in and meet up with the rest of our group Craig and Aaron. While in line started meeting the rest of the guys on this trip. Chuck (Ex Backlash) Kris (Cast Gold) Art, Larry, Paul, Dexter and Bob ! The Rooster then pulled in with some solid 200 + YFT .
Now starting to get excited to get going.

We boarded on time and headed to the receiver to get some 6'' deans and clear the point.
Sam, came down and gave the safety speach and the plan to head straight to the Rocks !
With the weather on our stern the ride down was nice and easy. Mounted some reels had tacos for lunch and mounted some reels and settled in for the ride.

Tuesday: Arrived at the Rocks at noon. Put the trollers out and it was not more than 3 minutes later
and HOOK UP ! We had a double on the trollers and a couple on jigs. Note: During first family meeting
Monday night, Capt. Sam, suggested avoiding bait and '' make em eat the jig '' and we did.

Dust settled from first stop and got the trollers back out and we didn't go 100 yrds and HOOK UP !!!
again. Repeat of the first stop and now the tone is set and everybody is stoked. We continued with steady action through the afternoon with 1-3 on the iron. Various jigs working, Raiders, Catchy Tackle,
Bombs and most stright tied to mono. And of course the normal jig losses with Wahoo fishing.

The weather was up with 15-20knts of wind and plenty of swell to make for plenty of rockin & rolling.
I don't think there was a dry boot on deck. I know a couple times mine were rolled up and completely
under water and I couldn't have been happier knowing we were on a hot wahoo bite.
We dropped the hook to stay the night and continue in the morning. 29 Hoo for the day.

Wed : Got started at first light and it didn't take long to pick up where we left off on Tuesday.
Gold was the hot color so I tied on a Hopkins with a short 7 strand leader and first cast
came tight real tight and I was on and under gunned . After only one fish yesterday and a few guys with multiples. I decided to drop down to 40 and a high speed reel and as luck would have it after getting my ass kicked a 61 pound beast hit the deck . We continued to scratch away until noon for a total of 43 for the day.

We then headed for the Ridge, to fish Thursday. We arrived at the Thetus Bank with much improved weather and started trolling and man life is good more Wahoo ! These suckers were aggresive. Charging us at times like a wolf pack. Double and triple hook ups. Some great surface visuals and jumpers.
The Wahoo were 30-50 # for the duration of the trip. I was able to land a couple more on a Gold and Silver bomb. 23 total for the day. Trip total 95 !

By the afternoon we started drifting for YFT that I would call 12-20 # with some 30's.
we ended up with over 200 for the day. We ended up at the 23 dropped the hook and slept well.

Friday was kinda slow then traveled to Cedros for Saturday arrival.

Saturday : arrived at Cedros to nice conditions and very little action
in the afternoon moved to Benitos and some better Yellowtail fishing. After finally hang a better model I got sealed.

We then moved to a nice spot at sunset, and it was here that Kris (Cast Gold) Put his good friend and American Angler regular Steven Nelson to rest and spread his ashes. It was a very touching moment.

Sunday : We spent a few hours this morning fishing for rock fish and Paul landed a decent yellow and so did a few others. Then it wa time to break down te gear and start heading up the line.

As been said many times before on BD, The American Angler crew ROCKS ! On this trip were Ray, Dave, Brad and Andrew on deck and Nick and Paul in the galley.

The deck crew operated like a well oiled machine. They were always right there when you needed them and fun to be around.

Also I must comment on the group of fishermen on this trip. Everybody worked vey well together during our crazy Wahoo stops and helped make for a great trip. And every angler on this trip came home with at least one Wahoo if not more.

Wahoo at the Rocks CHECK ! 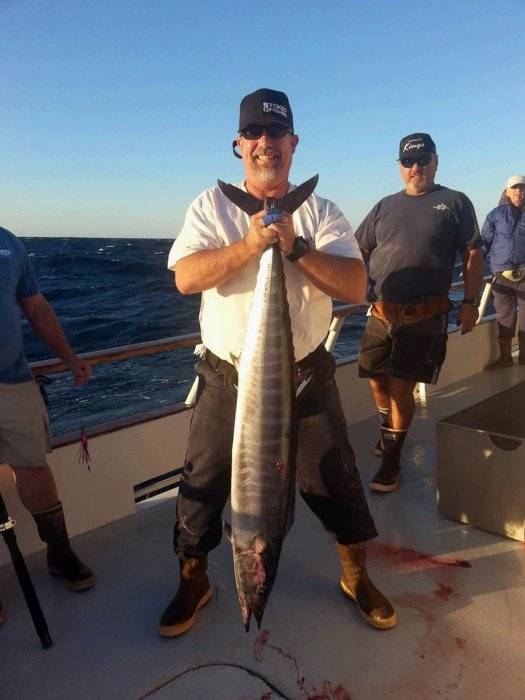 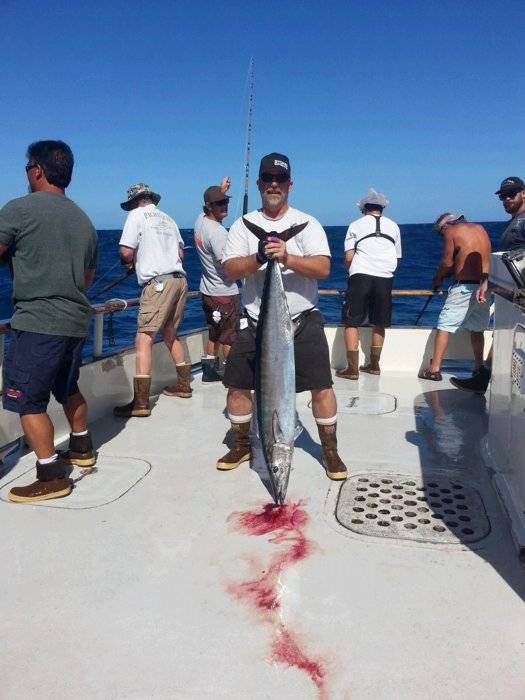 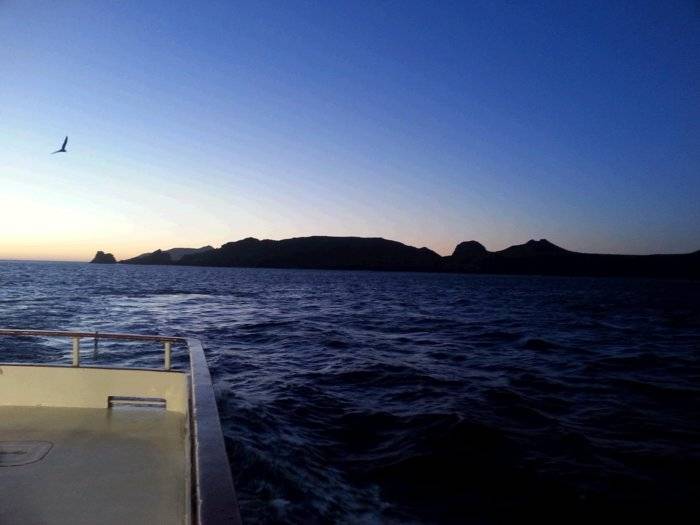 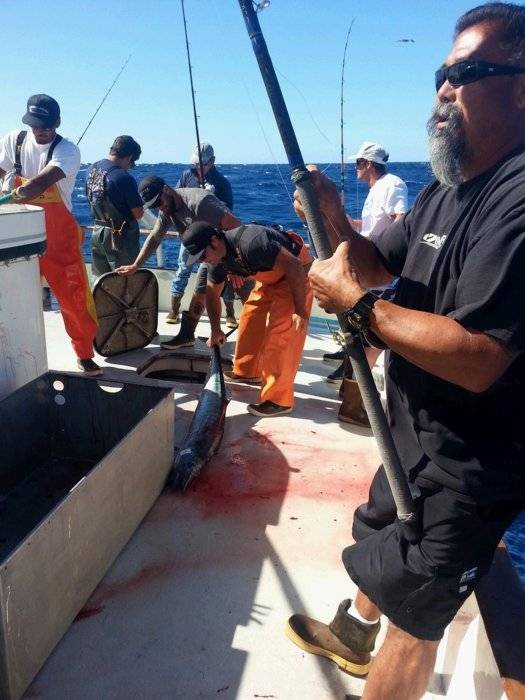 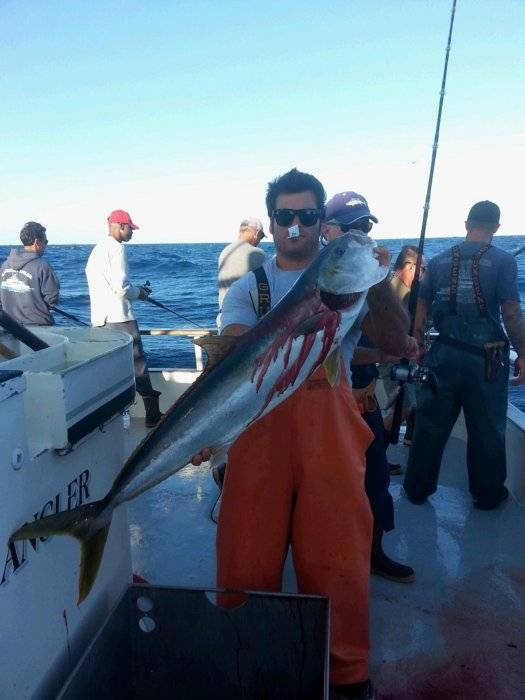 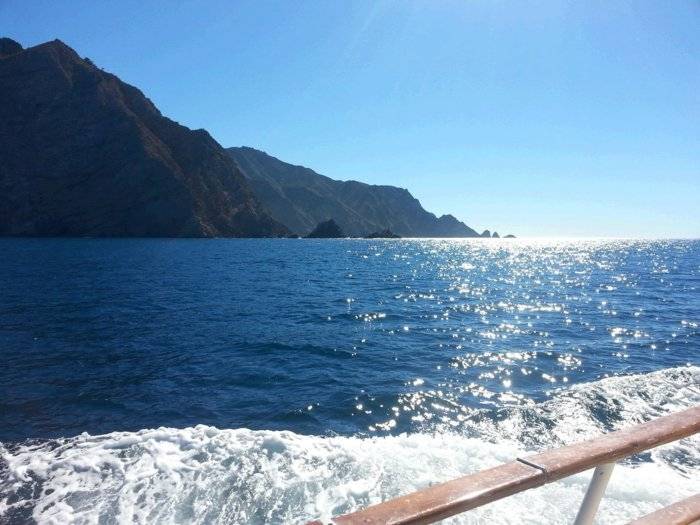 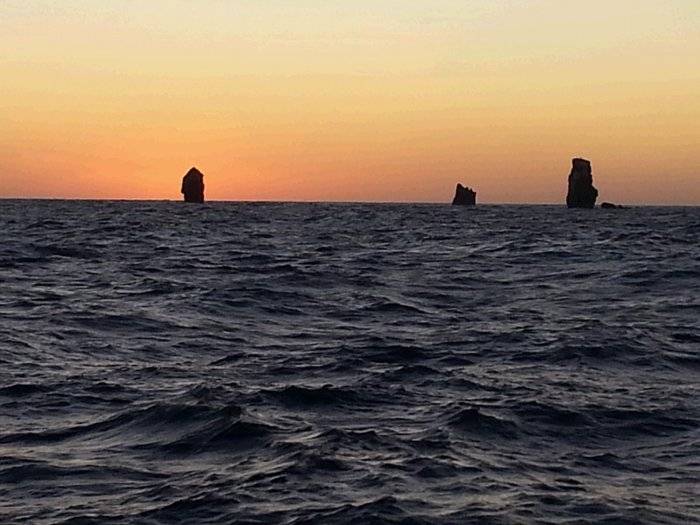 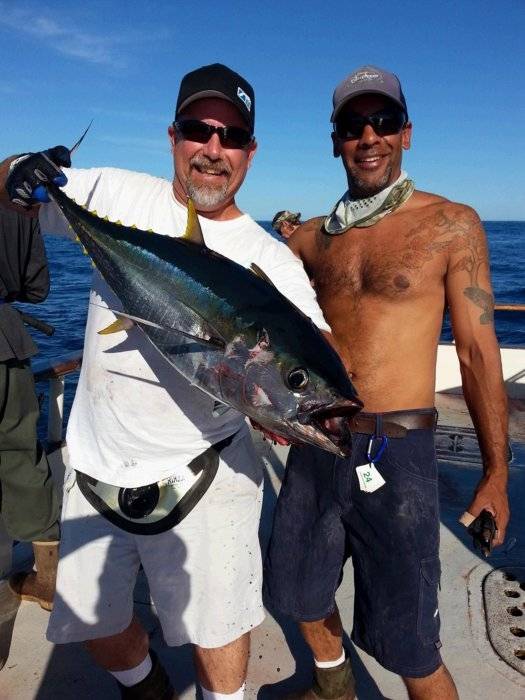 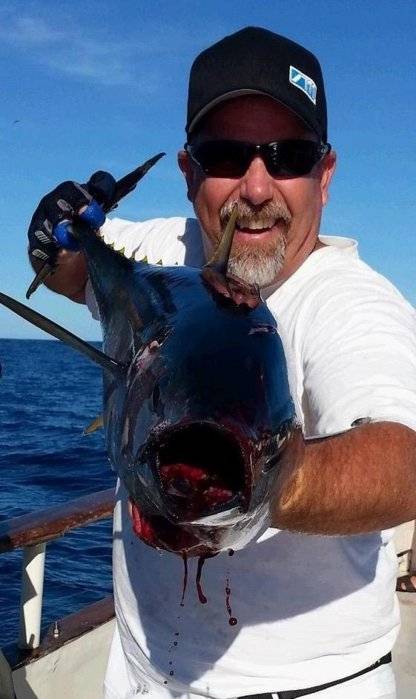 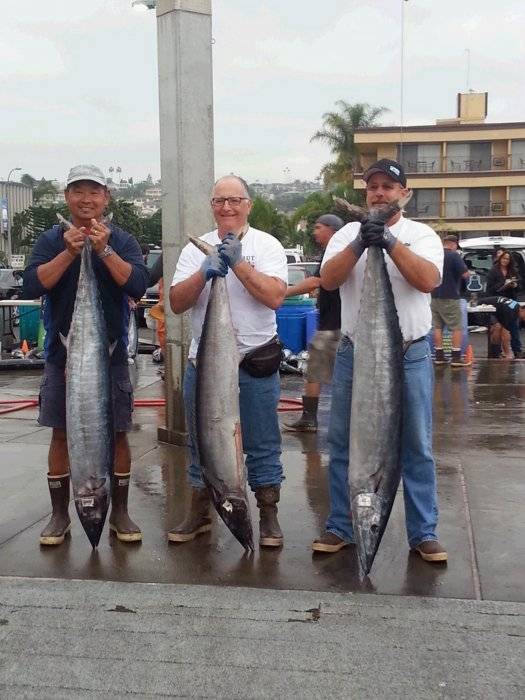 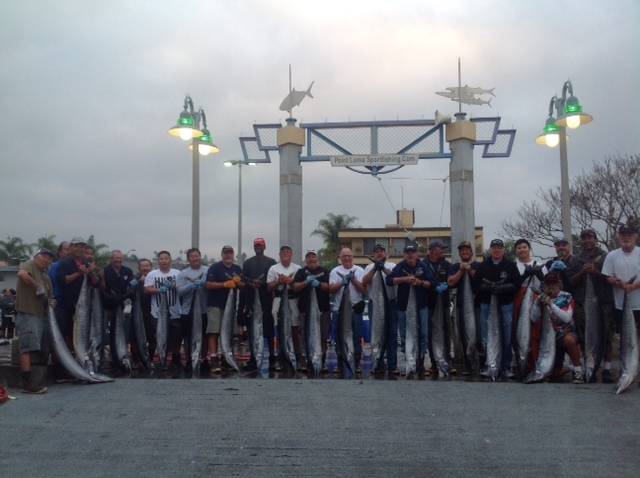 Congrats on the big hoo. I love the group shot with all the wahoo. Thanks for the report.
Reactions: Auggie
Upvote 0

Great report! Sounds like you had a memorable trip, thanks for sharing...
Reactions: Auggie
Upvote 0

Great report, felt like I was there!
Reactions: Auggie
Upvote 0
H

Wish I Was Fishing!

Thanks for a great report about a great operation. Lori, Sam and Brian, have a GREAT operation going. A true family atmosphere, and an AMAZING crew. They really do seem to appear out of no where at just the right time. Glad you really hammered the hoo. I can't wait for February!!!!!!!!
Upvote 0

Great report! One of my last goals to achieve: a Wahoo off the Rocks. Congrats and what a touching tribute to a friend. Way to get 'em.
Upvote 0

I need to express my thanks to Auggie for filming the video, and ExBacklasher for taking photos of the burial at sea for me. The family will appreciate that he was among such good folks to see him off to his final resting place.

RIP Steve
Toggle signature
The early bird gets the worm, but the second mouse gets the cheese.
Reactions: Auggie
Upvote 0

Great read thanks for sharing! LOVE that boat and crew. Just booked my 8 day with them today!!!
Toggle signature
Bill

Excellent reading, congrats on the great fishing with a touch of inspiration.

Thanks for sharing your trip.
Toggle signature
God is great, beer is good and people are crazy
Reactions: Auggie
Upvote 0

Cast Gold said:
I need to express my thanks to Auggie for filming the video, and ExBacklasher for taking photos of the burial at sea for me. The family will appreciate that he was among such good folks to see him off to his final resting place.

Kris, I was glad to do it .
Toggle signature

Cast Gold said:
I need to express my thanks to Auggie for filming the video, and ExBacklasher for taking photos of the burial at sea for me. The family will appreciate that he was among such good folks to see him off to his final resting place.

We buried Mel, the founder of Allcoast, at Alijos after a single drift day that plugged the Q 105 with tuna. Had to be 2004- 2005?
Toggle signature
C-Ya
Reactions: Cast Gold
Upvote 0

Thank you for taking us on the trip with you! Congrats on the outstanding wahoo! I think a trip like you had is WAY more fun than getting beat up by big tuna. (Although the tuna are more consistent.)
Reactions: Auggie
Upvote 0

surfgoose said:
Thank you for taking us on the trip with you! Congrats on the outstanding wahoo! I think a trip like you had is WAY more fun than getting beat up by big tuna. (Although the tuna are more consistent.)
Click to expand...


We were debating the Wahoo / Tuna fun factor on the trip. My personal best Tuna is a 100# Blufin and I enjoyed the excitment and aggressiveness of the Wahoo over the Tuna.
Toggle signature

Musings of an Aging Angler

On the water 9 day fishing report