Offshore Almost jackpot on the Amigo

I just got back from an overnight trip on the Amigo out of 22nd Street Landing in San Pedro. It runs charter groups 95% of the time, a great platform for a dozen to fifteen fishermen, and I had never had a chance to fish it before. But a month ago they were posting great counts of white sea bass and I have never tagged a big one, so I signed up for the next open party trip coming in late July and hoped for the best.

It proved to be a really special trip even though we never saw a white sea bass. Capt. Jeff told us that we would be making the long run out to San Nicholas Island because the big yellowtail had been biting for the last couple of days and the white sea bass had been playing hard to get. So we hit the bunks (several inches too short for me, as usual) and rolled offshore. Capt. Jeff would make a great weatherman, everything that he told us to expect came to pass. He said that we would be anchoring about 6am and the current would be ripping, but if we fly lined a sardine on a small hook like a #2 on 25# fluorocarbon leader the yellowtail would be chewing for three hours and we could get a bunch. At 9am the current would die and then we would go catch some fat rockfish for a few hours.

And it came to be so. It was a cool and overcast day, light sprinkles of rain from time to time, enough wind that I lost my cap once but fortunately it fell inboard into a puddle of blood so I was able to rinse it off and set it aside and wear my spare cap for the rest of the trip. We wore light jackets all day. San Nicholas Island is small and scrunched and desolate and I had never seen it before, it is so far offshore that very few sport boats will make that long trip.

I started off tossing lures from the bow because even though I believed Capt. Jeff, it is just so much more satisfying to catch a fish on a lure. Would the yellows like a nice JRI or Tady? Nope, not even a follower. How about an under spin like had caught my last yellowtail? Nope. Meanwhile a half-dozen fish had come aboard for the bait boys, including a nice schoolie bluefin of all things! The yellows were nice, around twenty pounds each, and so I thought that if they only wanted live bait that morning, live bait I would give them.

I still fudged on the side of caution, using a Baja Special with 30# fluoro and a ringed #1 Owner fly liner hook, a bit heavier than suggested. There were live squid in one bait tank and nice sardines in the other. So I started out with a squid, because in my experience yellowtail will always prefer a live squid over anything. But not today! The sardines seemed to be preferred about twice as often, go figure. So I switched to green-backed sardines, nose-hooked because of the current, and let fly. And quickly connected with my first yellow, a nice 20# fish. The two deckhands, Mark and Nick, did a great job of keeping us out of tangles and making almost all headshots with the gaffs. The yellows were bled in a big plastic tub and then dropped into the RSW hold just like on the bigger tuna chasing boats.

Capt.Jeff was doing hook&hands because some of the guys were not connecting, and once he hollered “Who wants this fish?” several times and nobody spoke up, so I said “OK, I’ll take it” and swapped rods with him. Ninety seconds later it breaks off. So I concluded that it was a message from above, I was meant to fight my own fish that day, and did so.

I got a second yellow, about twenty-five pounds, and at the end of that fight my left hand was starting to go numb. Stupid arthritis plus carpal tunnel! So I broke out the heavy spin gear, a Shimano Spheros 20000 on the heaviest Terez rod, with 40# short top shot over 80# braid, and added a three foot fluoro leader of 25# to a #1 fly liner hook. This rig has handled fifty pound tuna so I had confidence that it could take on an island yellowtail. My third fly-lined sardine got picked up, I set the hook and it took off! This was bigger than the others! Back and forth for five to ten minutes and deckhand Nick comes to my side and said, “Can I check your drag?” and pulls it maybe six inches off the spool and says, “It’s a little light. You can pull real hard on 25#” and adds another half-turn to the drag knob.

Now I set my drags before each trip with a scale, and I usually don’t let anyone adjust anything for me when I’m fighting a fish. But I had seen how Nick and Mark had been handling tangles and gaffing and I had confidence in them, so I didn’t say anything. And it worked, I started to gain more on the fish. And another five minutes and it was at color, and it was a much bigger yellow than had been taken that day, and bigger than any I had gotten in the past decade, approaching thirty pounds. A clean gaff into the collar and he was mine!

Nick said, “Nice! That’s a Cedros Island-sized fish! You and the bluefin are tied for jackpot!” And I got to pick it up for a picture.

I took a break in the galley, my left hand had been cranking rather than holding the rod but it was still not happy about the abuse. And came back out and tied on a new hook (one fish, one hook is my rule) and cast out a fresh sardine, expecting it to be swiftly carried towards the stern, and watched with surprise while it kept swimming out away from the boat. And then noticed that nobody else was being swept towards the stern either. I looked at my watch, and it was 9:05am, and Capt. Jeff was a true prophet, the current had died exactly on time.

So we hear the speaker crackle, and we’re told to wind them up, we’re going to go find some rockfish. A half-hour later we’re making a drift a mile off of the island over a piece of bottom that looks good to him, and every drop is a BIG rockfish! I haven’t seen that consistent quality in at least a decade. I don’t put on a sinker, I’m a lure man to the core. I try two different heavy octopus-body lures but no takers. So I switch to a heavy glow slow-pitch and start bringing up fat reds and a couple of other types, each two pounds or more. I get my ten fish to the surface, keep the best seven and put the three smallest (which were still very nice fish) in the tub for someone else. And go have lunch.

About 1pm we call a halt and start heading East for Long Beach. The sun finally comes out and the fish start being lifted up from the RSW to be sorted for the jackpot and cleaning. Like Nick had said, my yellowtail and the bluefin were the two biggest, although several other yellows were only a pound or two behind mine. And the scale ALMOST balanced between the two fish, if my yellow had eaten just one more piece of chum he might have taken it! But the bluefin won.

I have to give a special call-out for Mark and Nick for their fish cleaning skills and attitude. I have seen a lot of fish filleted over the decades, and I have never seen a better job done! I included a photo of the carcass of a twenty pound yellowtail so you could see how little was left. Each yellow got the collar taken too, without special request. They charged only $7 per yellowtail and the tuna, and $2 per rockfish. I have paid a lot more for a lot less.

Capt. Jeff runs a class operation. Second captain John, cook Craig, and Mark and Nick all did an excellent job. The boat stayed clean and sharp all day. Everyone left with a bunch of excellent meals and great memories. If you ever need to recommend a medium-sized charter boat, the Amigo out of 22nd Street Landing should be high on the list. 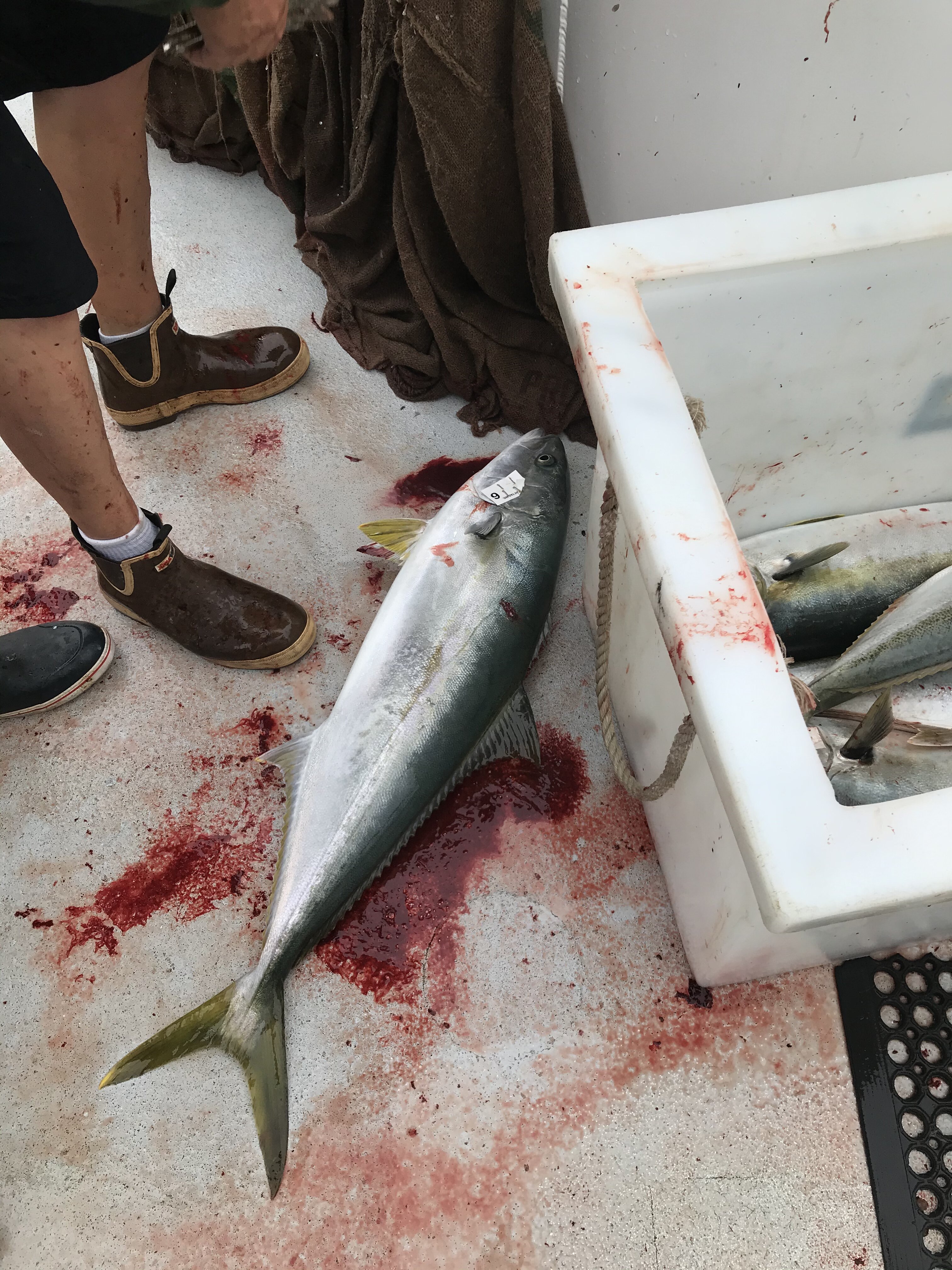 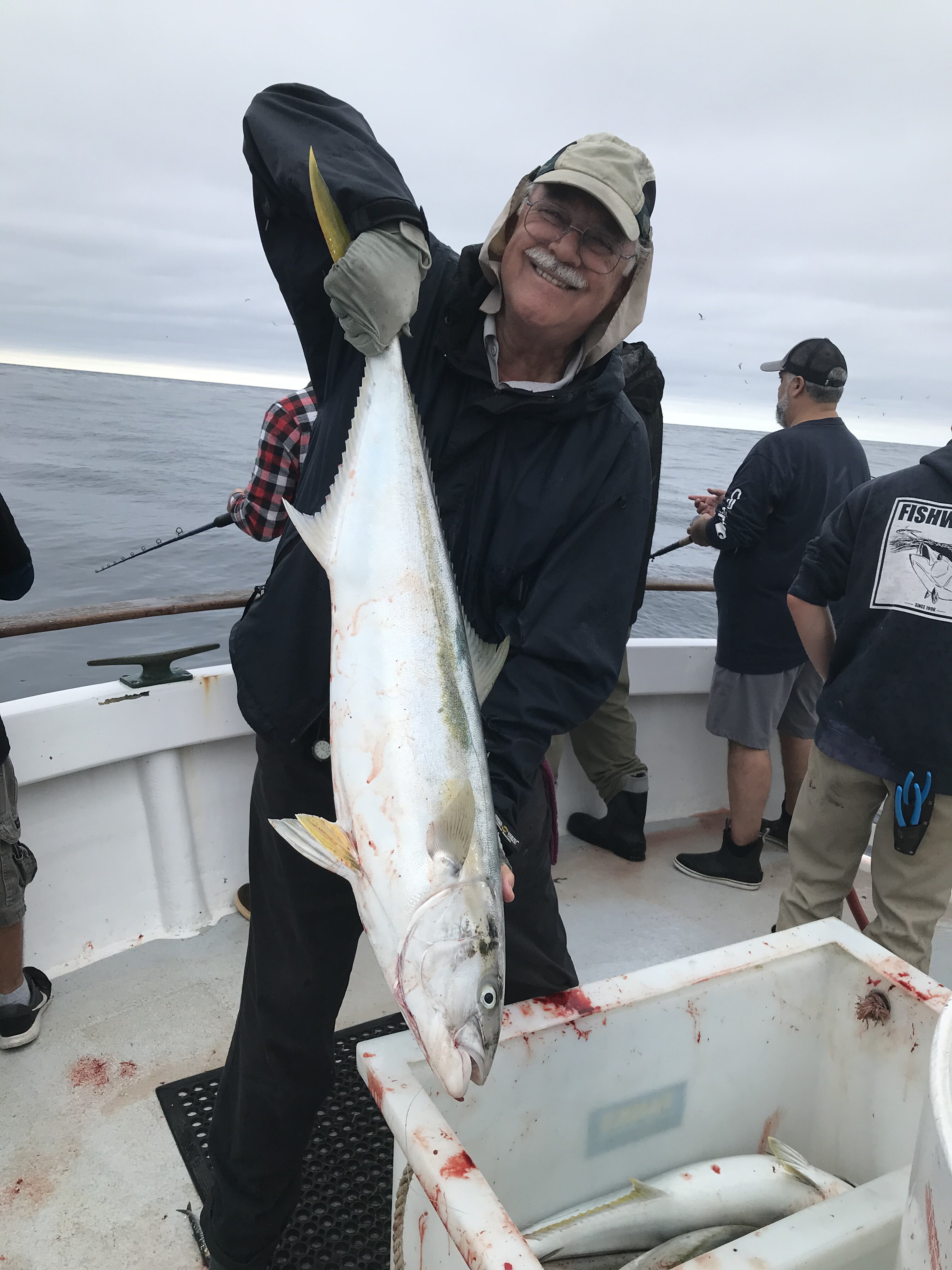 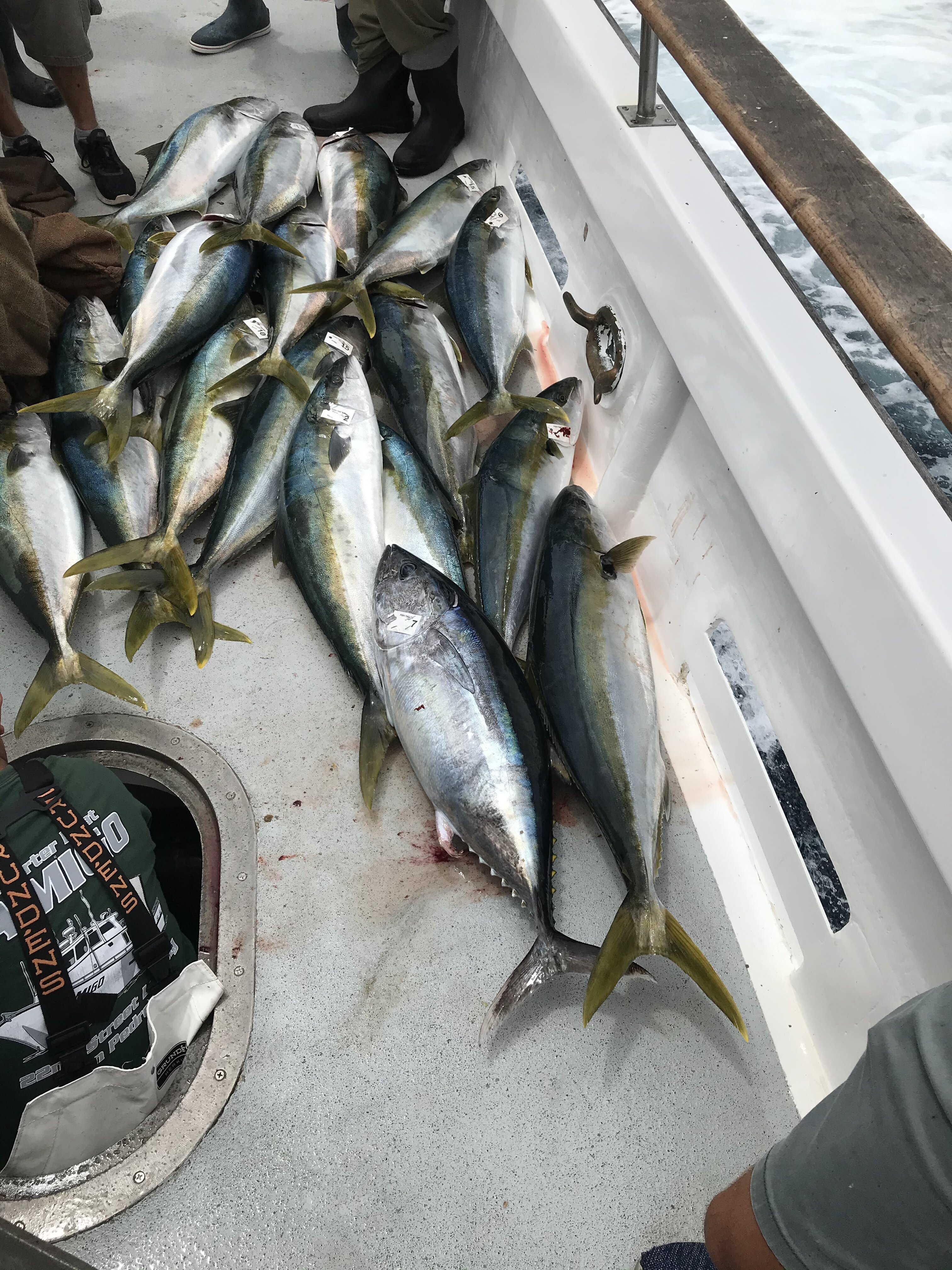 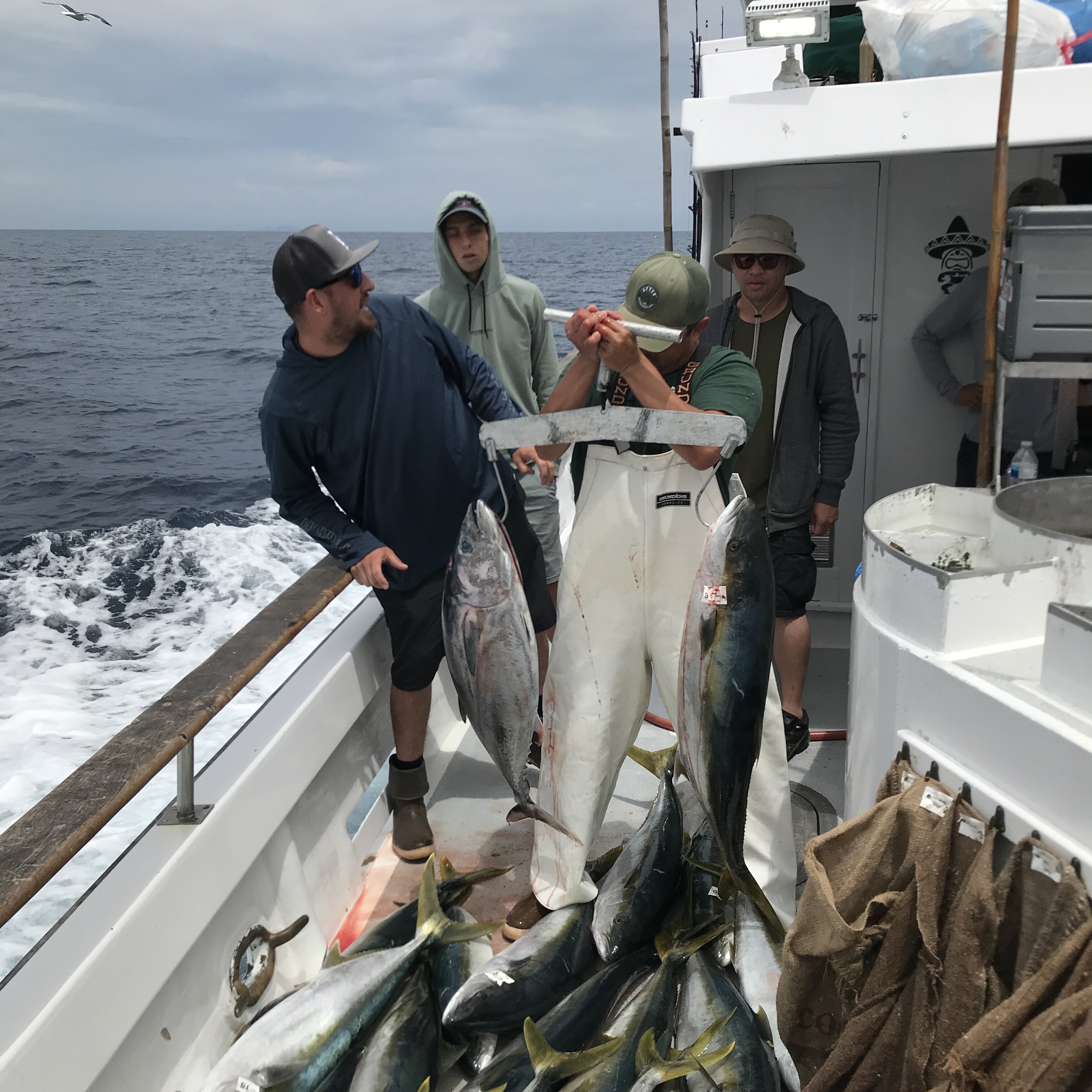 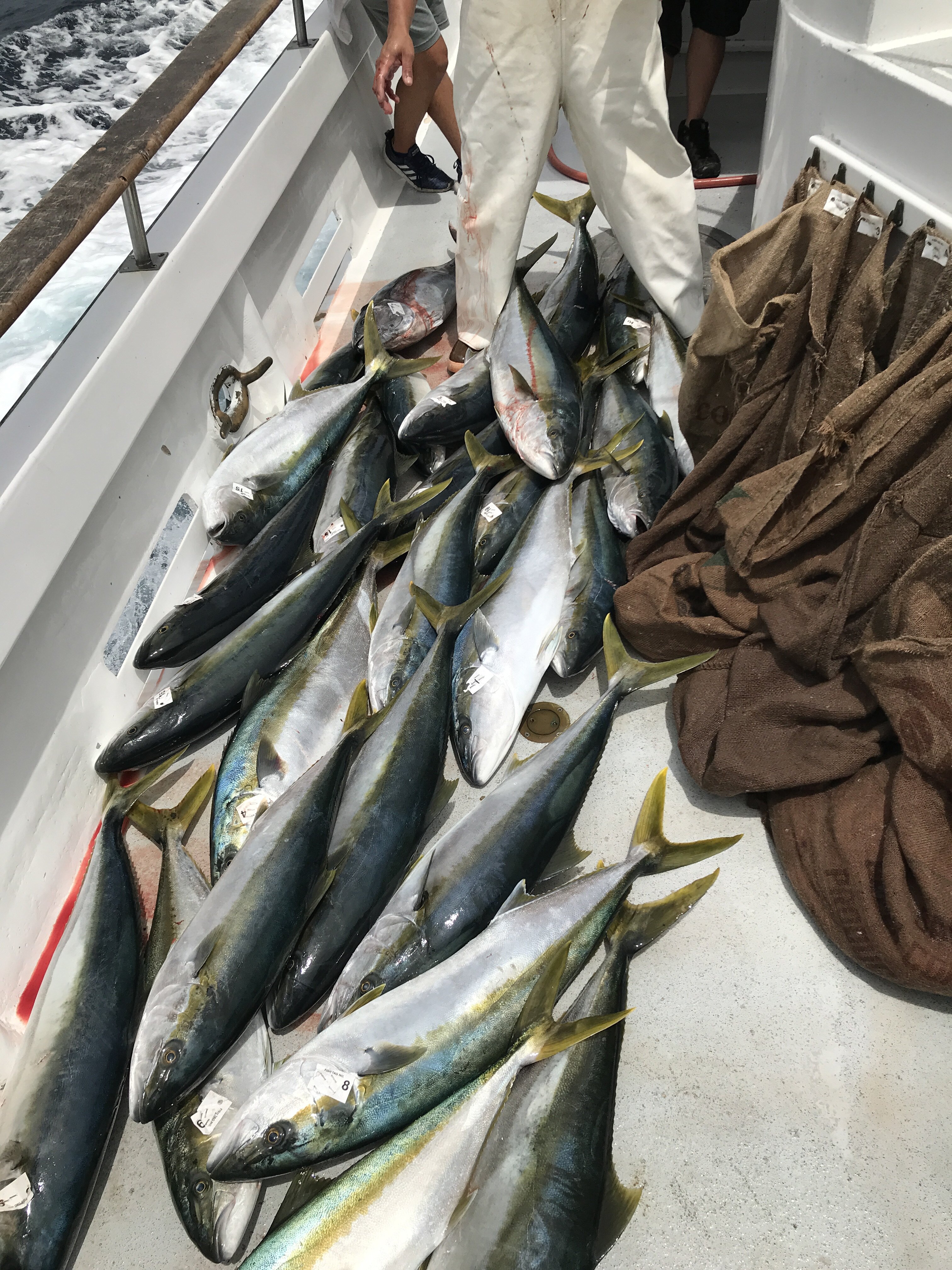 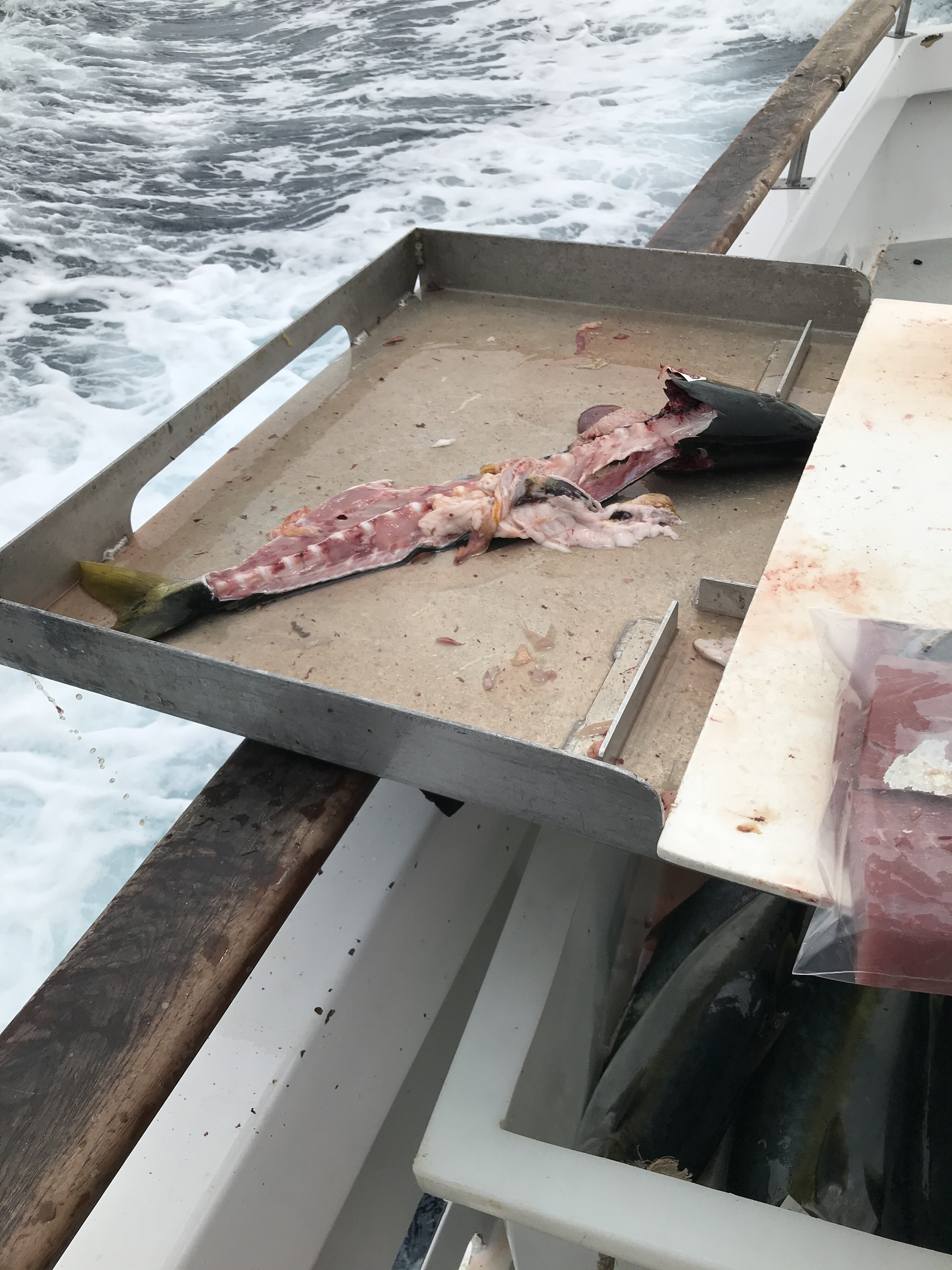 Great report! Nice job adjusting to the conditions to get your own fish. JP next time!
Reactions: surfgoose
Upvote 0

Great report glad you had a great trip!
Toggle signature
Work to live and Live to fish!

Enjoyed your writeup! Great trip sans WSB!! Who needs "biscuits" when they have a 3 course meal with YT!!
Reactions: Tom123, surfgoose, woodfish330 and 1 other person
Upvote 0

Thanks for the report.
Toggle signature
-AH
I get skunked and I can not lie
Reactions: surfgoose
Upvote 0

Great write up and an even better haul!
Reactions: surfgoose
Upvote 0

Great write up, that is a Cedros level YT for sure!
Reactions: surfgoose
Upvote 0

Another great report by the tallest black brant Hunter I know. Nice work G.
Last edited: Jul 27, 2021
Toggle signature
I CATCH IT. I KILL IT. I CLEAN IT. I DON'T DELIVER IT!
Reactions: surfgoose
Upvote 0
J

This is a great report. Plenty of details and good pics. Nice job!

Brother.. .either writing skills are greatly improving here on BD..... or Ali and Jason are doing private tutoring...lol.

That was a great read.... followed easy....great picts....good descriptors....smiles all around. Went out of your way on this one ... to San Nick... its been years since I've seen that real-estate....but in the day..... that place was ridiculously good. Happy to see its still as I remember. Thanks for your pict and.posting efforts. Well done!!

Any chance the guy’s name looking at the fish on the scale was Oly?
Reactions: surfgoose
Upvote 0

Great job, real nice grade of yellows you guys got into.
Reactions: surfgoose and Tunahead
Upvote 0

How close was that JP weigh in? Wow.
Great report. Thanks.
Reactions: surfgoose
Upvote 0