I’m building a two piece Black Hole Cape Cod Special Jigging 150g. I have a some questions. Instead of dumping into one thread, I figured I would separate out the discussions to hopefully get more targeted answers and to make the threads more useful for future reference.

I’m going to acid wrap. I’ve spent a ton of time searching here and other places, but haven’t really found the information I’m looking for on some of the basics. If any of this is covered in other threads or references, my apologies, but I really tried and didn’t find anything.

I know load testing is key.
I’m trying to understand the theory of the line path and loading to the guides/blank through the transition, and what to look for and look out for.

For reference I borrowed a friend’s 1 piece of the same rod (not acid). It is longer, probably slightly more parabolic and bends more through the handle, and has an additional guide (tip +7) than I’m planning. Unloaded, the line contacts the guide rings at the points farthest from the blank (top) for the full guide train. As it loads up, then obviously the line contacts the bottom of the rings.

For my initial guide spacing I used the same spacing as his rod for the top 5 guides. Based on pictures, BH two piece is pretty much the same (as is spinning version for top 4 guides)
I spaced the stripper at the same distance from the reel as his rod. Guide # 5 from tip (# 2 from reel) is coincidentally? in the same position as the #2 guide from reel on his rod.

So, with probably too much introduction, my real questions are more on the theory of how to get the right transition and what to look for in load testing.

With conventional or spinning, the load testing is easier to see the line angles at the guides and see how to adjust. Trying to understand what to look for when load testing acid; the top to bottom transition is tripping (pun intended) me up a bit.

Thinking maybe need to space out guides to get transition closer to butt to get out of the bend a bit? 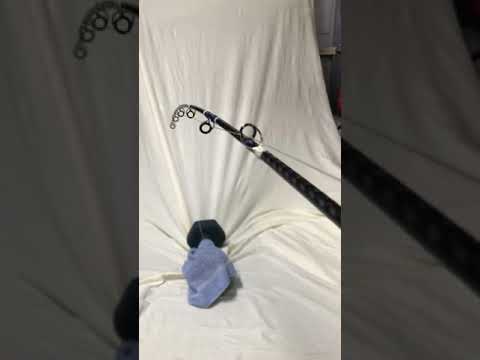 Load in video is probably only 5 to 10 lbs. Stills captured from video shows line in middle of second transition guide then with almost no angle at a bit higher load.

And some other pictures.

Any help is much appreciated!
Thanks 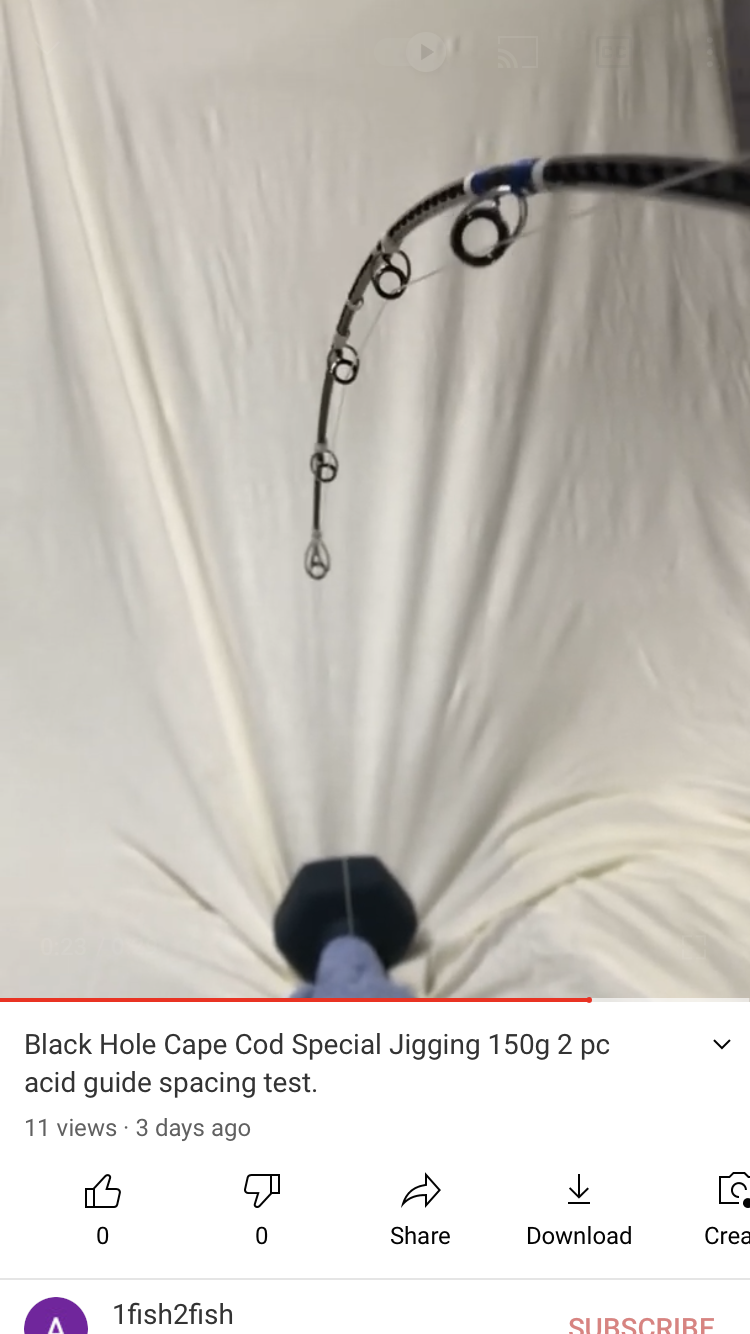 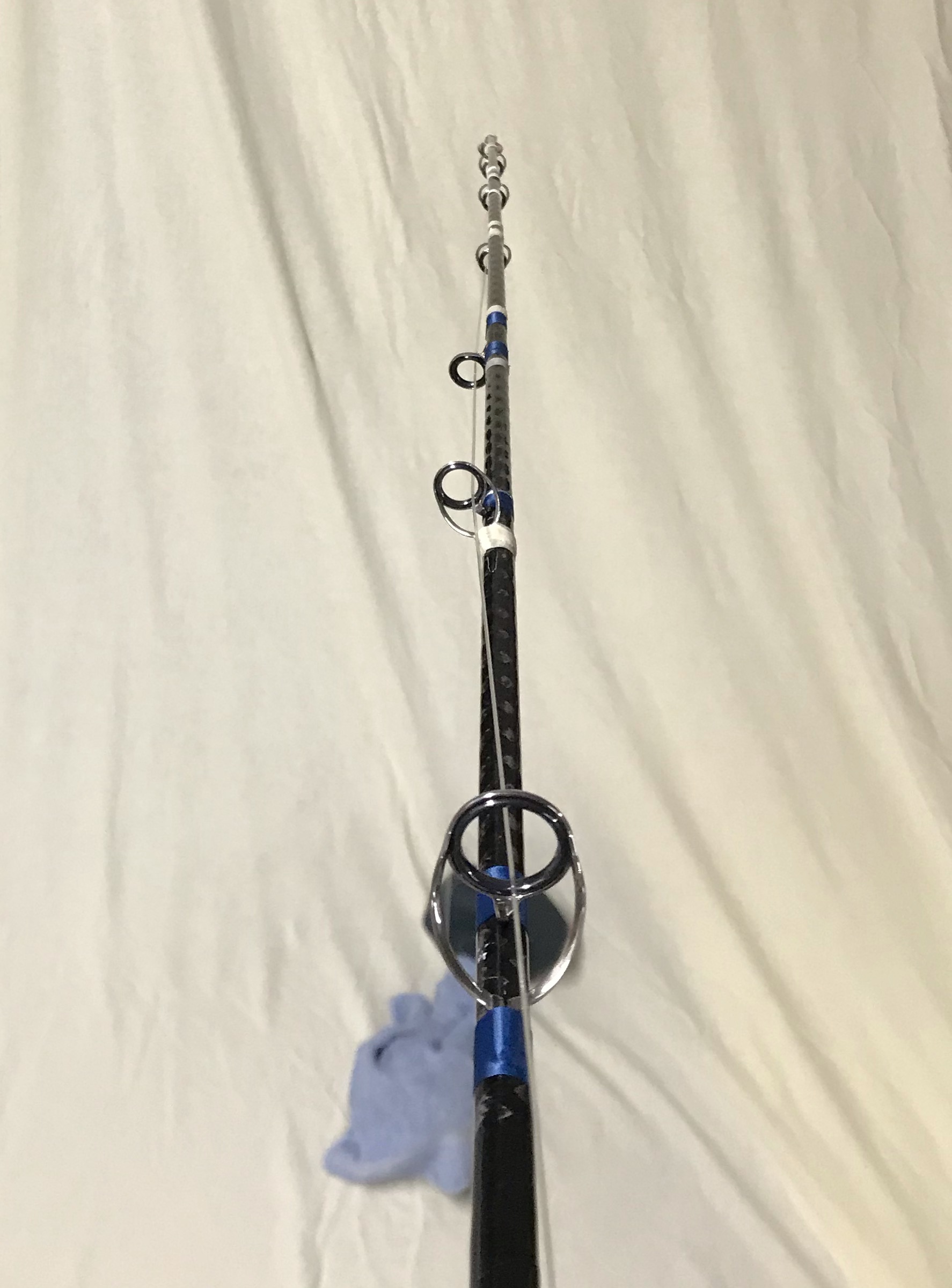 Curious about this myself. I tried setting up acid wrapped rods before but never liked how they looked. Each time I end up ditching the idea and going with a standard guide layout. This being said...

I'd try moving the stripper closer to the reel seat, rotate the second guide more to the say 45* or even 35*, and maybe let the third guide point at 0*. This should allow the line to drop below the blank much more quickly and better distribute the load across the entire blank. The bad thing is there probably will be a tendency for the line to want to stack on one side of the reel. Taste great or less filling? This is the issue...
Reactions: 1fish2fish
Upvote 0

I don't mind the line stacking on the left. I just have to push it to the right with my thumb and let it come back on it own. Semi-auto line leveling!
Toggle signature
When I was your age, Pluto was a planet.
Reactions: 1fish2fish and Pitchinwedge
Upvote 0

very simple ..line has to touch each guide ring when loaded even under lite load... its not ring size but height or ring on stripper that matters ...transitions guides #10 are fine two guides about 4" apart at 45 & 135 degrees ..first 180 guide 4" away & same size as two transition guides..run the rest of the 180 guides to follow the natural curve ( bend ) of the blank ..

If the line isn't touching the guide ring adjust guides or guide height ..guides are pretty useless if the line ins't in contact with them..
Reactions: skrilla and 1fish2fish
Upvote 0
1

Capt Richie,
By touching under light load, you mean it should be touching so as load increases the load continually increases with increasing load?

1fish2fish said:
Capt Richie,
By touching under light load, you mean it should be touching so as load increases the load continually increases with increasing load?

remember when testing guide train with reel to strip about half the line off the spool..just testing with a full spool of line wont give you true results ...dead lift is mostly BS..check a several different angles off the rod not just 90 degrees
Reactions: mikek
Upvote 0
1

Thanks Capt Richie
Does Fuji make LC in polished as the rest of my guides are polished? I know they have scaled down their polished offerings. Cannot find them anywhere, so probably no. Maybe old stock on eBay. Not the end of world if doesn’t match.

Measured guides I have:
Current size 20 puts inside bottom of ring at 12 mm off blank.
Size 16 puts is at 8 mm.

Height comparison to the LC12M (from Mudhole specs)

I think I’ll stick with the 10s since I don’t have any 8s. Stocks at local shop is low. Usually use FG, but also use improved Bristol which is a bit beefier.

Thanks for reminder on half spool.

I did intend to test at multiple angles, but need some gross adjustments before tuning.
Upvote 1

the height of the guide info your'e using.. Is to the bottom of the inside of the ring ?
Upvote 0
1

Yes, on the two I measured. On the LC12M I estimated from height (outside of ring)-ring size + 2mm to get to to inside of rings.
Upvote 0

fuji does make an LC12M in polish finish..they use them on the ultra high end rods out of Japan...try Ebay you may find one..I just used one on a rod ..
Reactions: 1fish2fish
Upvote 0

IMO, too much over thinking is involved with spiral wraps.

Get an appropriately sized stripper guide and run 8's the rest of the way out, unless the stripper is huge, then maybe run one additional larger guide.

Flex the blank and make sure the line doesn't touch the blank in the transition, and set the spacing at the top based on how the line looks.

Flex the blank hard pulling to the side away from the spiral transition and make sure the line doesn't touch the blank (it will be different than pulling straight down).

Again, just my opinion, others will disagree.
Reactions: 1fish2fish
Upvote 0

Boat Name
none at this time

Having built over 100 acid rods the past 25 yrs, I used basically the same set up for the first 3 guides as you did, first guide is normal, next 2 equally offset to the left to get the line under the blank, the rest of the guides(use one or 2 less than normal)to the tip under the blank. I've caught many tuna over 100#s on my acid rods. Pic
show me at Guadeloupe Island yrs ago with one of my acid rods on a 100# yft. 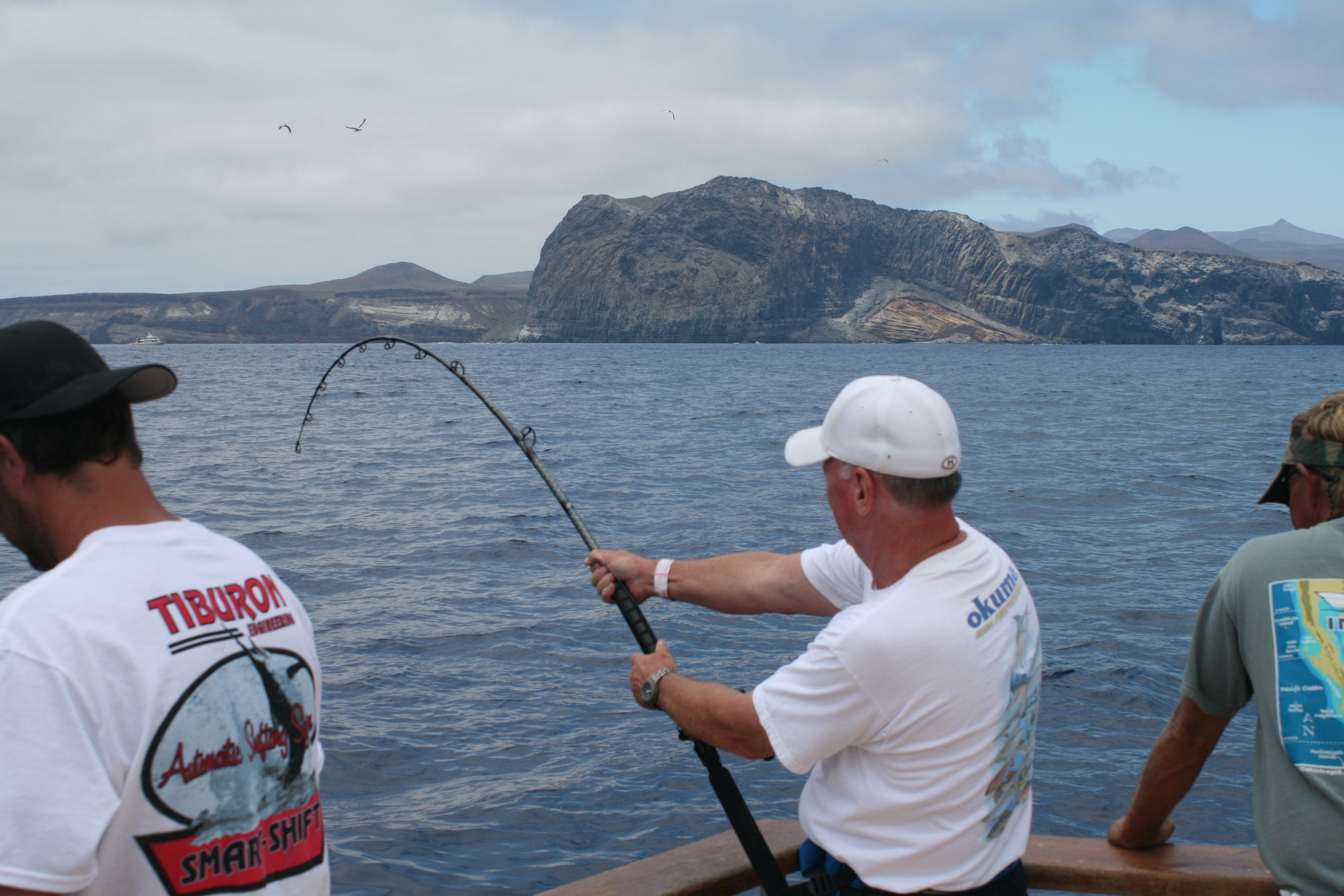 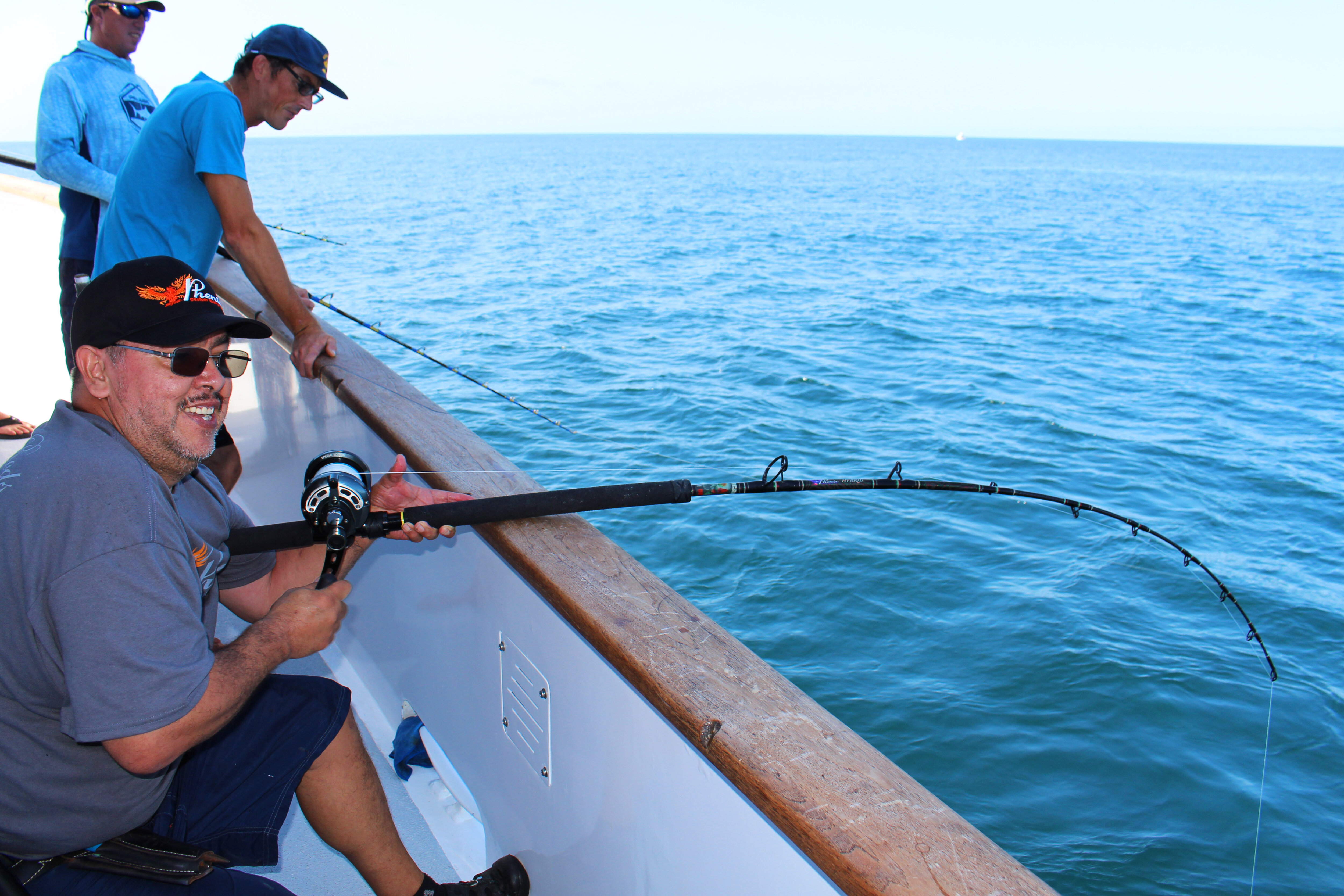 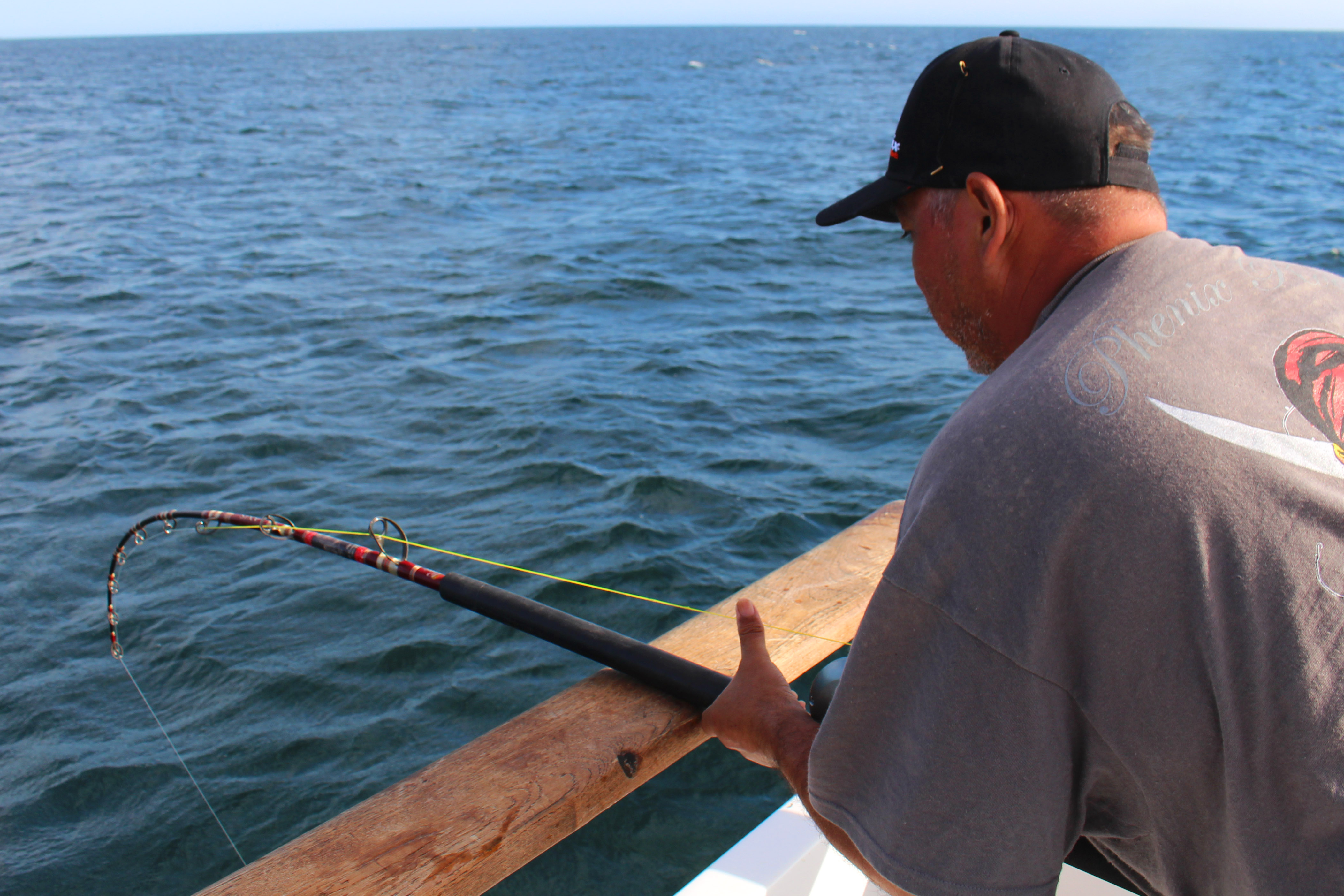 Thanks Graya. I’d seen and studied a couple of those photos in my forum searching.
Upvote 0
1

I played around a bit more with guide layout. Decided to go all 10s except for the stripper which is an MN 20. Here’s a chart I did based on Capt Richie’s suggestions of 12MLC or 16MLC comparing to the MNs I had. 12 too low, 16 too high (compared to the 20 I used). A 16 LC, might have been a good choice since only ~1mm shorter than the 20 MN. 20 ring looks a bit big relative to the 10s, but I didn’t have patience to search and wait for shipping (probably from Japan for a polished frame). So I wrapped the 20 and finished the rod. The chart assumes that all the LCs have the same offset from height to inside of ring close to guide(where line would sit for a casting guide) as the MN of the same ring size. Disclaimer: Your mileage may vary. Finished guides last night. Will probably do a second coat and some thread work between joint and stripping guide, but other than that I’m done.
Ended up going with MN 10s for all the guides, except 20 stripper.
Finished rod weight: 7.9 oz (4.2 oz over blank weight)
The two piece made fabrication and assembly of grips easier. To ream grips didn’t need a tapered mandrel, just used sharp drill bits by hand one size at a time. Also used a bit with tape as a mandrel to shape grips. I don’t know what others use, but the wood rasp I have is great. Coarse to rough shape quickly, then fine to remove the grooves from coarse, then a finer file and sand paper. Gimbal is Fuji, also turned on drill press to make matte finish. 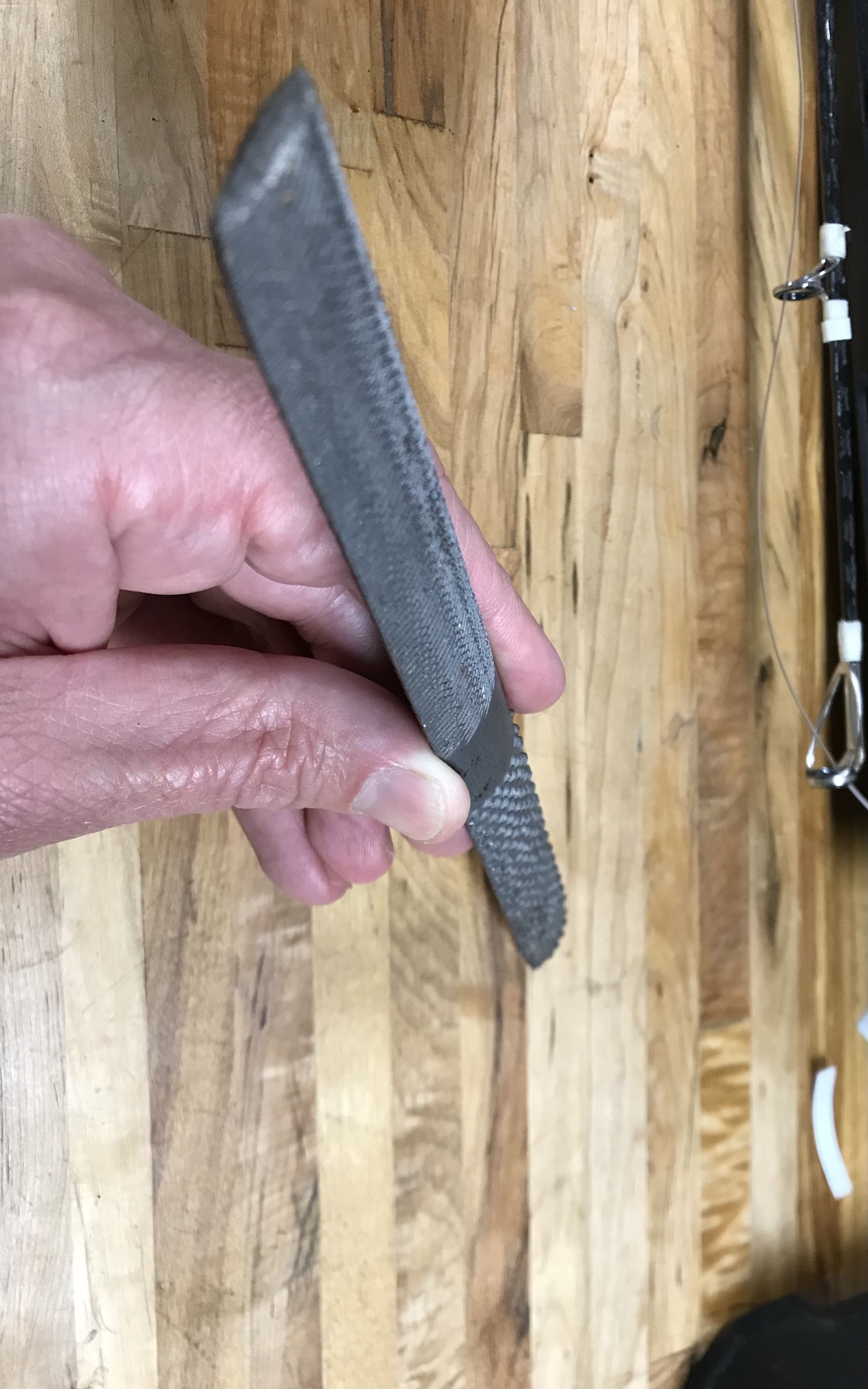 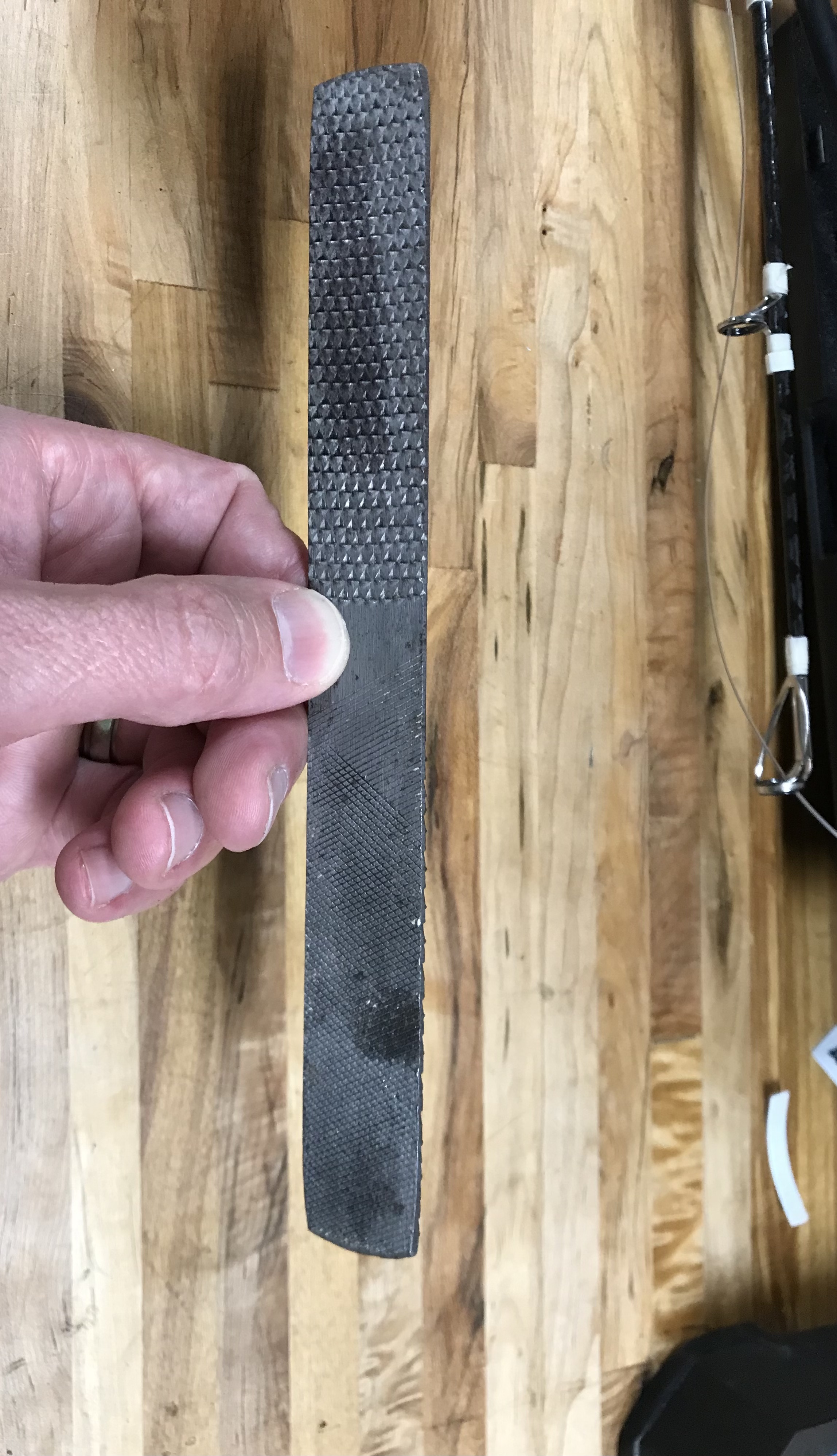 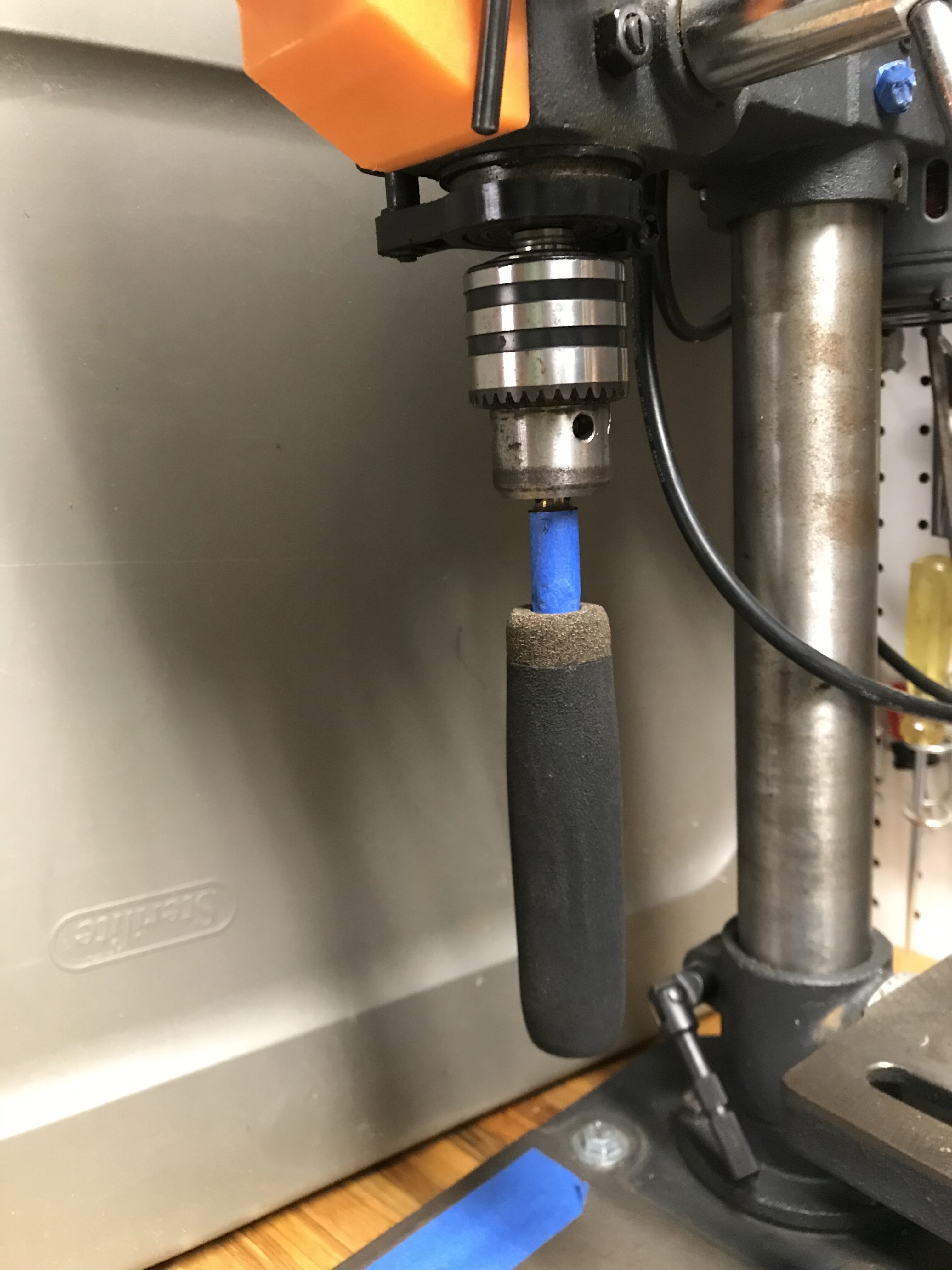 Yeah, loads up on all the guides (except stripper needs a bit more load). Angle is pretty decent and stays loaded at basically the same spot on the guides(except stripper). Interesting your rod doesn’t load up the stripper. Must be pretty stiff through there. Used to seeing the concern that line is digging into fore grip, when loaded, which would also load the stripper?
Reactions: Explorer1
Upvote 0
E

Ya my 4 speed jigging rods are stiff. Line touches all guides before and under load. Before loading up line touches stripper guide 4 O’clock and loaded 5 O’clock. (Spiral to right)
It’s the 2 slow pitch rods I got stripper guide line don’t touch.
Last edited: May 23, 2021
Upvote 0

I just realized that I do one more guide in the rotation than you did. I almost always need a guide at 90* to keep the line off the blank at all times. 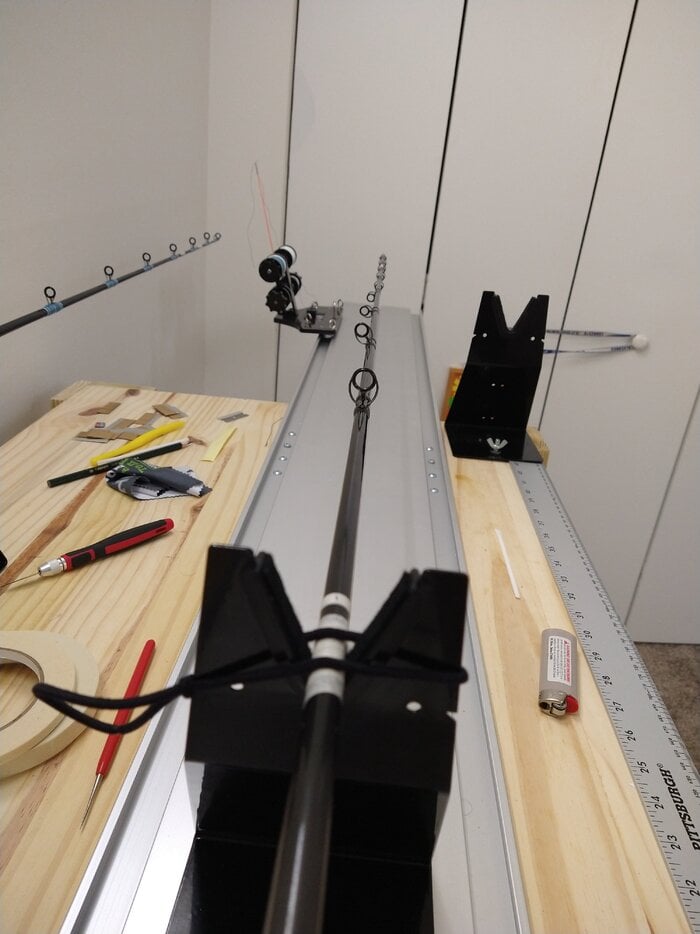 I read mixed suggestions regarding a guide at 90. Decided not to. It’s a short rod, also, so wanted a quicker 2 guide transition.
Reactions: rodblder and RWP
Upvote 0

1fish2fish said:
I read mixed suggestions regarding a guide at 90. Decided not to. It’s a short rod, also, so wanted a quicker 2 guide transition.
Click to expand...

I think it comes down to the blank and reel combination more than anything.

Most of the rods I build have small guides and low pro reels, so they line is closer to the blank.
Reactions: 1fish2fish
Upvote 0
Show hidden low quality content