This is the story of a “trip of a lifetime” that almost didn’t happen. 2020 has been a tough year for all of us; it was made tougher when I lost my Mom in early October (not COVID). After that loss, I knew that I needed to recharge so I decided to go to “my happy place” and not to cancel my long scheduled 11 day trip on the EXCEL. Thanks to Jason in the EXCEL office for all of your patience and understanding.

We started our trip at Alijos Rocks for not much. The water had cooled off three or four degrees since before Thanksgiving. We trolled around for a few hours for zero wahoo. We departed Alijos Rocks proper for Alijos Bank and again conditions were less than optimal for wahoo. We spent the night hoping for a good bite on YT and got about 25 (30-45#) for the night. It wasn’t exactly what we were looking for so Captain Fleck made the decision to head for the inside. He briefed us to be set up for wahoo and 40-80# YFT on porpoise.

We got to the Lower Banks around 1030. Got a couple of wahoo on the troll. A few bites offs on wahoo bombs and jigs, I got bit off on a green Captain Jimmy bomb; it’s the only wahoo bite I had for the trip. Started a drift on the high spot for wahoo. The drift turned into a drift for YT and grouper.

A passenger hooked what we thought was a wahoo (on 40#), but it turned into a nice tuna. Almost out of nowhere, big tuna started boiling around really good and we started getting ‘em. We were in no way prepared for this grade of fish! Many boats had spent lots of time on the Lower Banks without seeing any fish let alone any big fish. I quickly rigged my 100# and 130# fly line outfits and my kite rod. The crew quickly put together kite rods/big gear and we started hooking them on the kite and a few on the fly line sardine.

I was #5 and my turn came up on the kite. My first time resulted in a nice striped marlin

. Someone else was already up for the kite so I had to wait my turn to come up again. The wind died down to 3-5 knots so the kite had to be replaced by a single helium balloon. My kite gear was a Penn 50T two speed, a custom Calstar X46XH wrapped by Yo’s, a 25’ wind on leader by BHP, a Braid Power Play Pad/Harness, and 200# Momoi Double Trouble sardine rig with 7/0 Eagle Claw 2004/2005 circle hooks.

We were using “Double Trouble” rigs with sardines and once the balloon was positioned it was no more than 100’ from the starboard side of the boat so we a really good view of the bites. I was not out for more than 10-15 minutes when a huge tuna moving right to left blows up on my baits. We see most of it’s back, sickle, and tail out of the water and knew this fish was way bigger than 300#. I let the balloon go all the way down and then started quickly/methodically winding trying to get tight and I did. As the fish started ripping line off at an alarming rate, I very slowly over the next 5-8 seconds eased the drag lever to strike which I’ve found to be very effective in getting good corner of the mouth hook sets with circle hooks.

The tuna made a screaming run off the starboard side and line was coming off the reel at an amazing rate. I was so concerned that I asked for the back up to be standing by and it was there very quickly. I was able to put a good bend in the rod and stop the run with about 100 yards of spectra left. After that it settled down and I went to work in the harness getting that line back on the reel. When the fish is away from the boat, I believe that the pad/harness is much more effective in putting pressure on the fish and getting line on the reel in preparation for the upcoming up and down end game.

The end of the fight started in the stern of the boat. I started up the starboard side, but turned around just before I got to the bow. I turned around and returned to the stern. Several times back and forth from the port to starboard corners, but getting line on the reel and keeping the line on the reel. Finally settled in the starboard corner and was making good progress toward finishing the fight. Having seen the fish when it bit, watching the huge tail beat on the rod, and having caught a 307# in May 2019 on the same gear, I knew the fight I was in for. I also knew that my gear was perfect and the crew around me were all experienced and very good. With Justin, Mike, Rene and Vance behind me, I had no worries.

I finally settled into the starboard corner; one of favorite places to finish a fight on a good fish. With the harness and a heavy kite leader the last 100’ of the fight happened fairly fast. BIG circles requiring a Y to keep the line off of the hull with me applying lots of drag including additional drag by pinching/palming the spool. With a lot of pressure from the short stand up rod and harness, the fish came in quite “green” after only about a thirty minute battle. Four gaffs in the fish and the crew tried to lift it over the stern rail, but it was simply too heavy. The crew brought the fish to the port gate where it was lifted aboard. Final weight was 373#

I’m not sure that I’ve ever seen so many 300#+ tuna around as I saw that afternoon! Though there weren’t as many fish as Fall of 2005, the fish I saw were generally far bigger than that banner year. I truly believe that there were 400# fish there that afternoon. We were lucky and landed nine fish that day including the 373, 292, 291, 263, 202, and others. We had our share of losses including pulled hooks and wind on failures, but I thought we did very well considering we were set up for wahoo and 40-80# tuna.

The next day, I was up at 0430 after going to bed too late; I spent an hour or so making kite leaders for the boat. Not much going on in the AM; an occasional boil here or there. I took a nice nap because not much was going on; many anglers now dropper looping for YT and grouper.

I got up before lunch and still not much going on. At Captain Fleck’s suggestion, I fished a bobber balloon for the first time for the trip. At first call for lunch, many people wound in and went inside to eat; there were now only two people fishing. There was now a better sign of fish with four or five very big boils 25–30’ to the right of my balloon bait. A few minutes later and I get bit. At first I thought it was a marlin as it showed a huge tail fin when it bit. A very good first run and I knew it was a tuna and that it was heavy. Started the fight in the port corner and making was good progress putting line on the reel. Moved to the port bow and the then the work began. Weather was up a little from the day before and it was hard to keep line on the reel as the boat moved with the swell. Finally bumped up the drag and finished the fight in the port bow after about 30-35 minutes. Fish weighed 304#; my second super cow in two days and my third in 18 months. Tackle was Penn 50T, Calstar X46XH, 130# BHP 100’ top shot, and an 8/0 Eagle Claw 2004.

My thanks to Captain Justin Fleck and the crew of the XL: Mike, Rene, Tim, Vance, Spencer, Richard and Nick; I couldn’t have done it without your help and assistance. Thank you for everything and see you again soon! 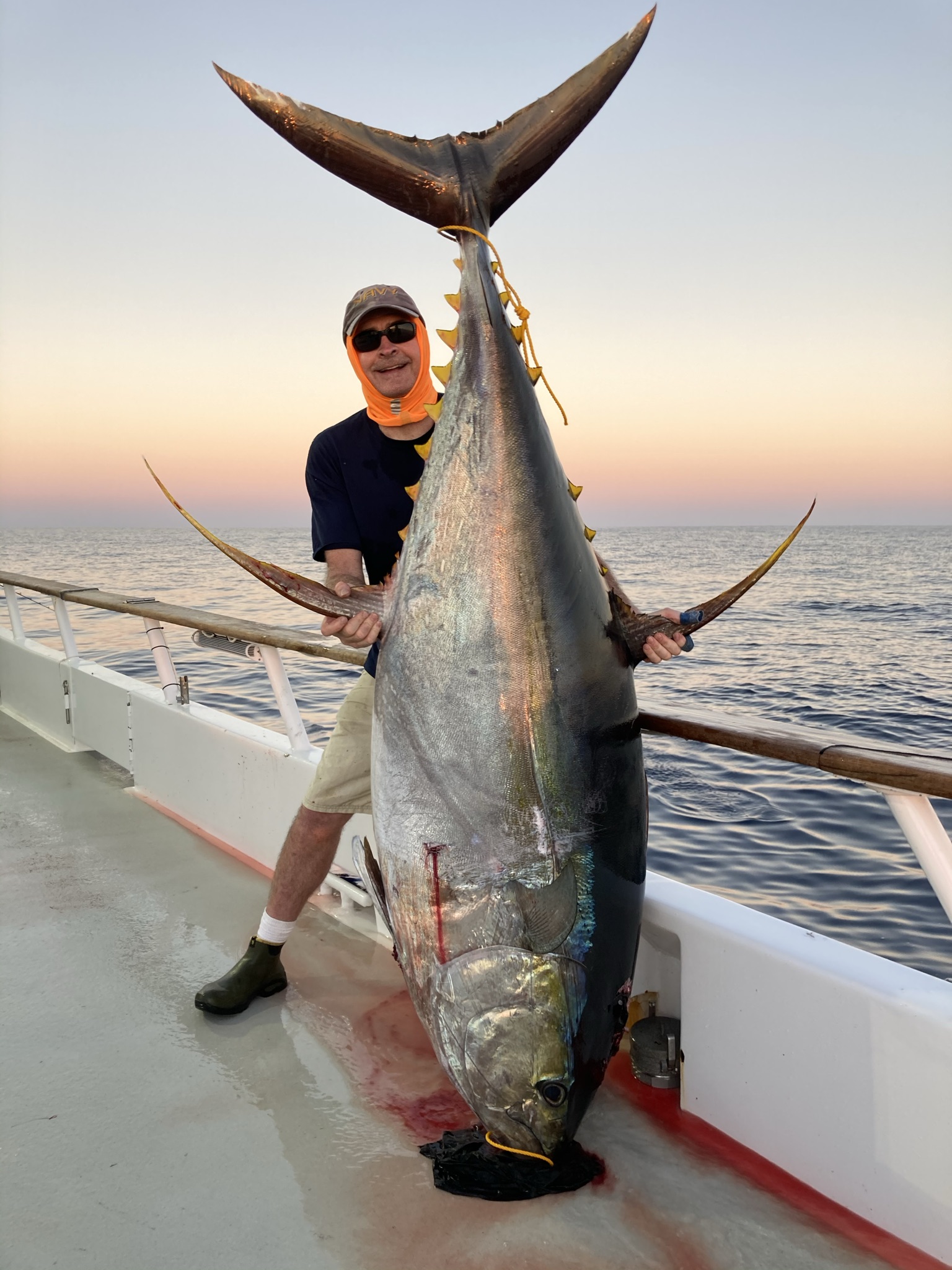 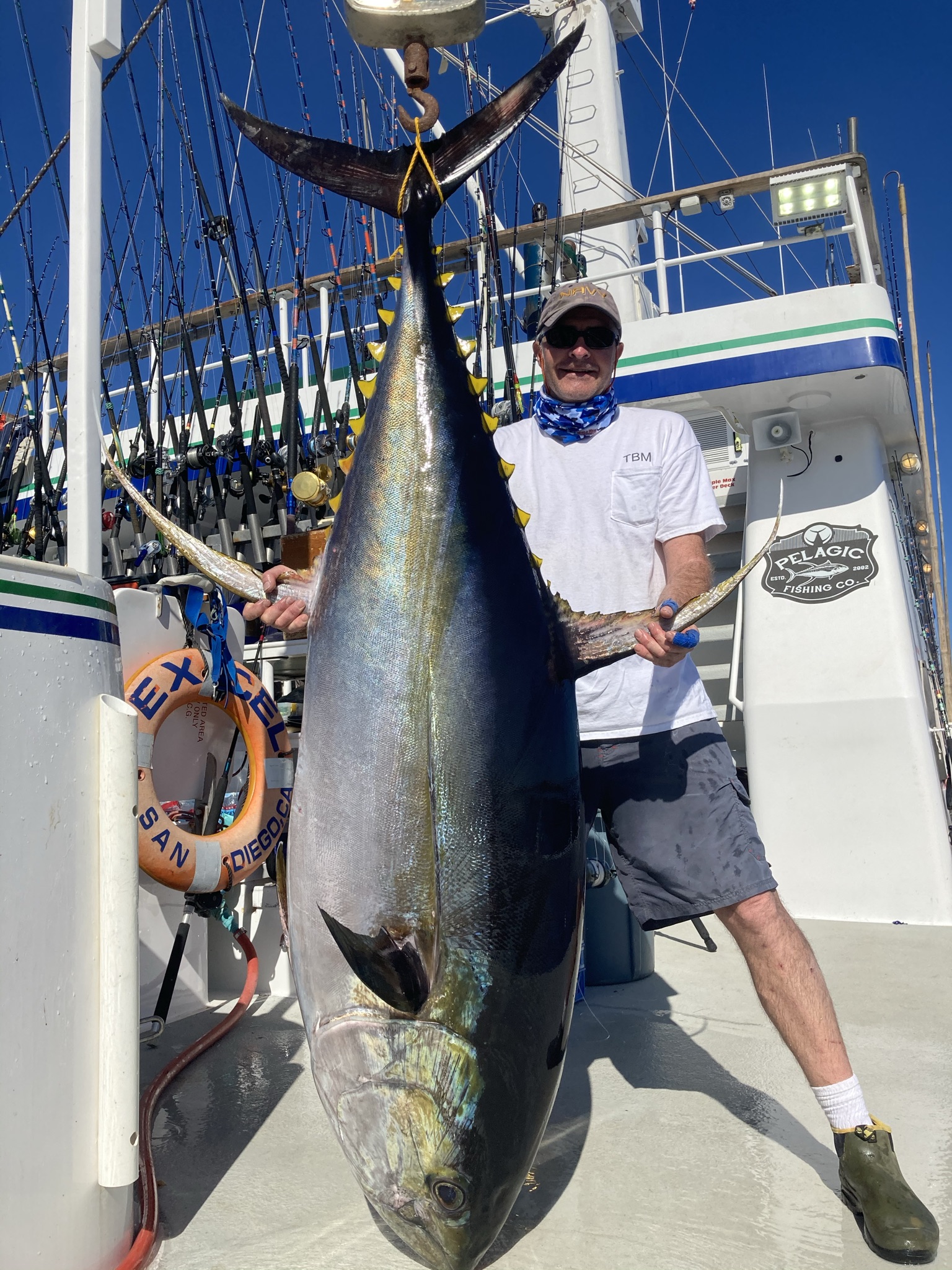 Boat
the one that floats

Great work Tim and great report!!! What an amazing trip, I (and everyone on this board) wish we were with you on this one!
Last edited: Dec 10, 2020
Reactions: BlueFinGrin and Tim Turis
Upvote 0

Wow, great story there Tim!
Toggle signature
When I was your age, Pluto was a planet.
Reactions: Tim Turis
Upvote 0

Tim
Thanks for sharing ..
Glad you made it happen ,congratulations !

Wow, incredible. Sorry to hear about your mom, but clearly she was present and bringing you fish mojo!!! Good work my man
Reactions: Tom123 and Tim Turis
Upvote 0

Great Report Tim. Glad you were able to get two Super cows on one trip. Since these were Heavies, did you have a 3 minute delay? (ATC)
Reactions: NaplesJohn, esgeo and Tim Turis
Upvote 0

Congrats on a great trip. Thanks for sharing with the write up
Reactions: Tim Turis
Upvote 0

Boat
A big Steel One

I watched him catch a cow trolling a yumme flyer when everyone else was eating tacos.

The best.
Toggle signature
Your a funny guy! Funny how? You know your funny..the way you tell a story! Oh so I amuse you?
Reactions: Mangisda, Montaukmaniac, fishin_kid and 4 others
Upvote 0

Glad you made it out. Sorry to hear about your mom. I'm sure she was with ya every step of the way.
Reactions: Montaukmaniac and Tim Turis
Upvote 0

I use the Eagle Claw 8/0 2005’s at Cedros with Macs and the guys say they’re too big until they end up borrowing mine... I always take extras!

I love the Excel!

I wanna be Tim when I grow up but I’m working on it in the meantime!
They don’t have patches for cow/super cow BFT

yet. Jason, if you read this, you owe me bud!
Last edited: Dec 10, 2020
Toggle signature
When I was your age, Pluto was a planet.
Reactions: jiggermyster, Peg North, Fishybuzz and 5 others
Upvote 0

Wow, those are a couple of really nice fish, Tim. Congratulations!

Sincere condolences for the loss of your mom.

Dangggg! Great read on an even more amazing accomplishment. Could feel the pain as I read the narrative...nicely played! Congratulations, and sorry for the loss of your Mom...she was watching no doubt!
Reactions: Tim Turis
Upvote 0

Boat
miss ion/fish on, "Wish on"

My condolences re: the loss of you mom.

What an impressive accomplishment!!!

Comments above are great, ALL spot on.

both those fish are absolute porkers!

shellback said:
both those fish are absolute porkers!

Hi Tim, thanks for taking us on this momentous trip....Congratulations again.....your certainly deserve your rewards.....Ron
Reactions: Tim Turis and Bill W
Upvote 0
Show hidden low quality content
You must log in or register to reply here.

Grant’s UFC on the RP