9/7: Last Wednesday we got a bunch of Corbina (all 14-16"), as well, but also got a few decent-ish Halibut. Weird deal, but at the high tide we got several halibut on the crabs in a row. Conditions were not good, but if you could keep a bait clean for a few seconds during the incoming at sunset, you were bit. We got countless big Perch, several Halibut, 6 Corbina and broke off a few unknowns.

9/10 & 9/11: Fished the home beach this weekend both days with two friends who are just starting to fish the surf (one on each day). Lots of nice Perch, a few decent Yellowfin Croaker, a few Shovelnose, and 6 Corbina (5 for me). Two of the Corbina were over 20". Others were all cookie cutter 16" models. All on sand crabs. All on a Carolina rig and 10LB Gold Seaguar Flouro (3'+) to a #2 or #4 Mosquito or Octopus hook, with either a 1/2OZ or 3/4OZ tungsten slider. Crabs were deep, so some digging required below the clam beds, but they are there at low tide if you look. Low tide was tougher, but we got a few at the low sight fishing. Just need to move a lot, change baits, and keep looking. Also, stay BACK from the holes before casting at low tide. Watched a bunch of guys try to walk up to them and drop a line in. So, don't make that mistake. The small/medium crabs with roe were best, doubled up, or tripled up with smaller crabs.

Season Overview: This season has been good on numbers of Corbina and Spotfin Croaker, but size has been lacking a bit. Also, of the well over 100 Corbina this year, only 4 came on ghost shrimp. So, keep fishing crabs. The Corbina are still on them. BTW - I fish several days a week, so those numbers look high, but are not really considering how many days I fish ... and how many fish I've lost by bad hook sets, or blown out via bad casts/spooking them. Should be double that if I could get out of my own way. This year saw about as many days of zero fish as days of of 5+ fish (most was 11 Corbina in late June, but all small/medium fish). Kind of a late season, but when it started, it got really good, really fast. Point being, there are a ton of fish around at nearly every beach I've fished ... and every fish has bit 10,12, or 15LB Flouro. So, don't buy into this 4-6 LB line bullish-t. Also, landing those fish faster gives you more time in the water, less time fighting fish/re-rigging connections, and makes for more healthy releases (most importantly). My opinion, only, obviously. Unsolicited advice, if you fish smart, get wet, learn to read water, and stay at it, you'll get them. And, please post some reports if you do ... 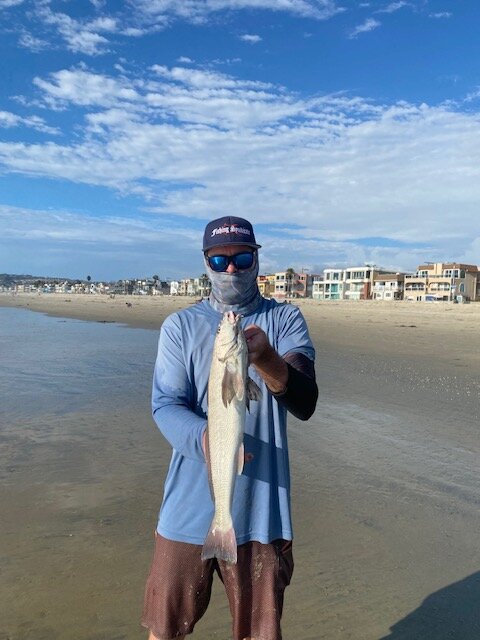 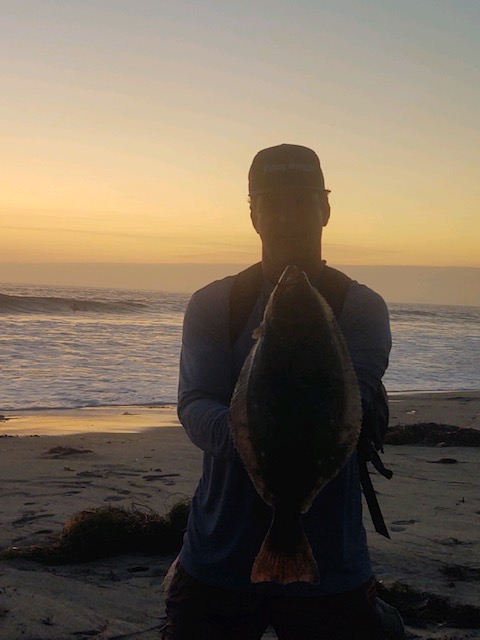 Wow, thanks for great and encouraging information about surf fishing! Sounds like a lot of fun, which is what it's all about. I have Bill Varney's book so I guess I better get after it!
Reactions: Anello
Upvote 0

Those 20 plus inch corbina are fun battles! So much salad (eelgrass) in so. OC at my spot has made surffishing tough this year.
Reactions: Anello
Upvote 0

Agreed on the slop. We've been inundated down here this season. It has simply been terrible. I've had to really work at figuring ways to minimize the effect of the kelp/grass on presentation. Bullet style tungsten weights, tiny swivels, and butt hooking baits with smaller circle style hooks and walking the bait in the current has been effective when it is really bad. But, some days it is just too much. We got another tank in the slop last night at the low. I missed two good ones and my buddy got this one. Very good fish. 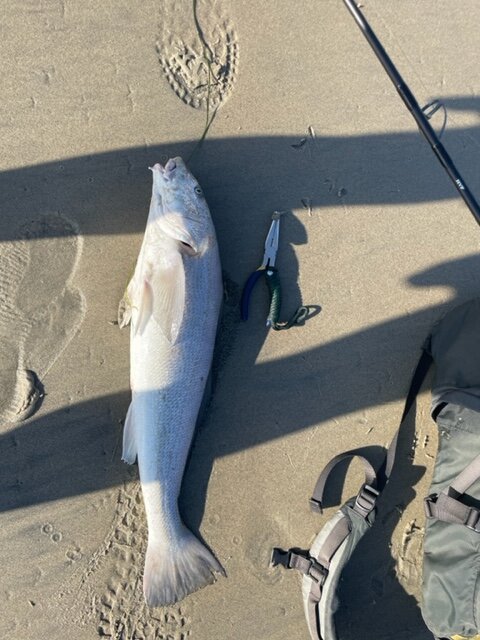