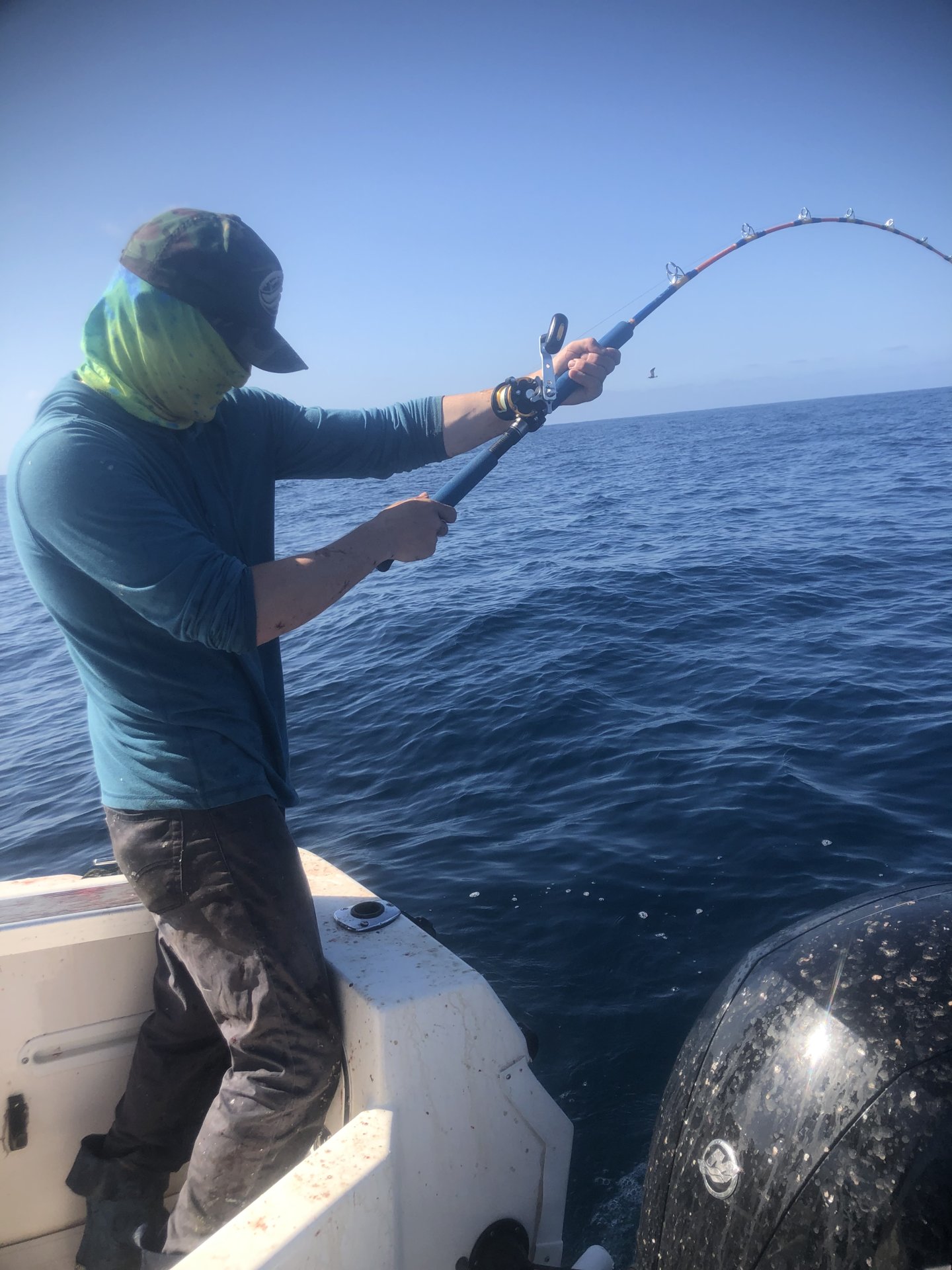 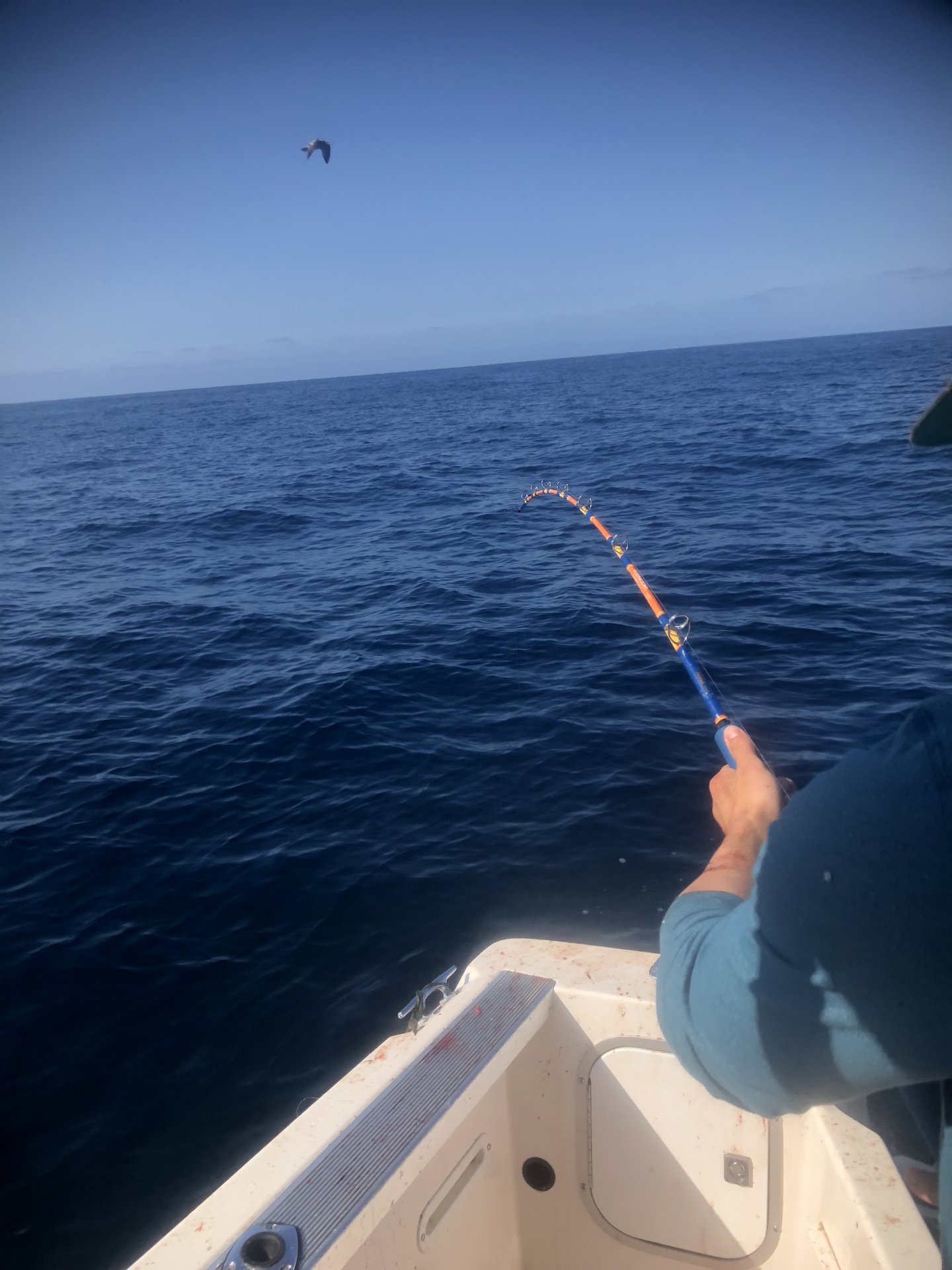 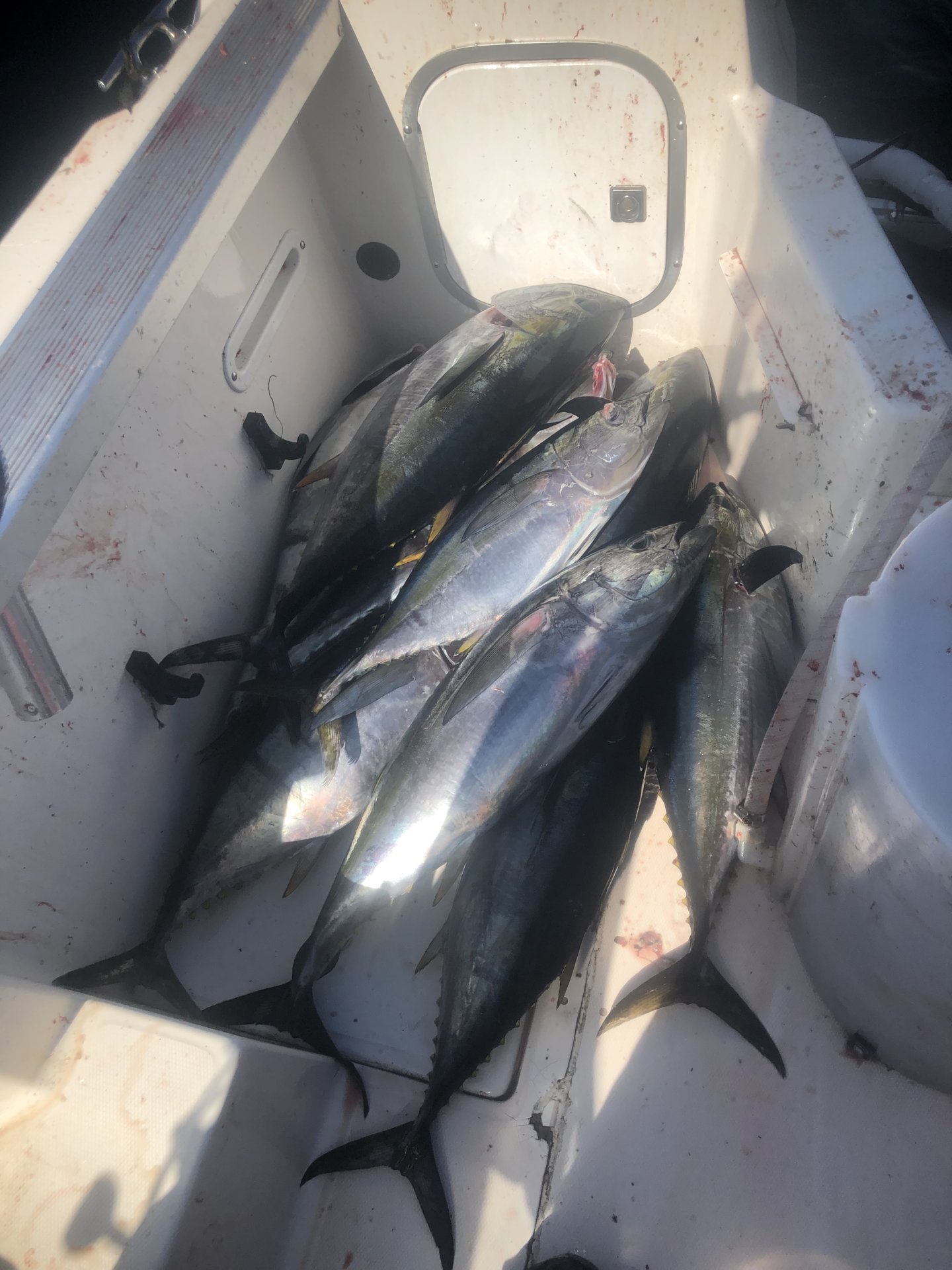 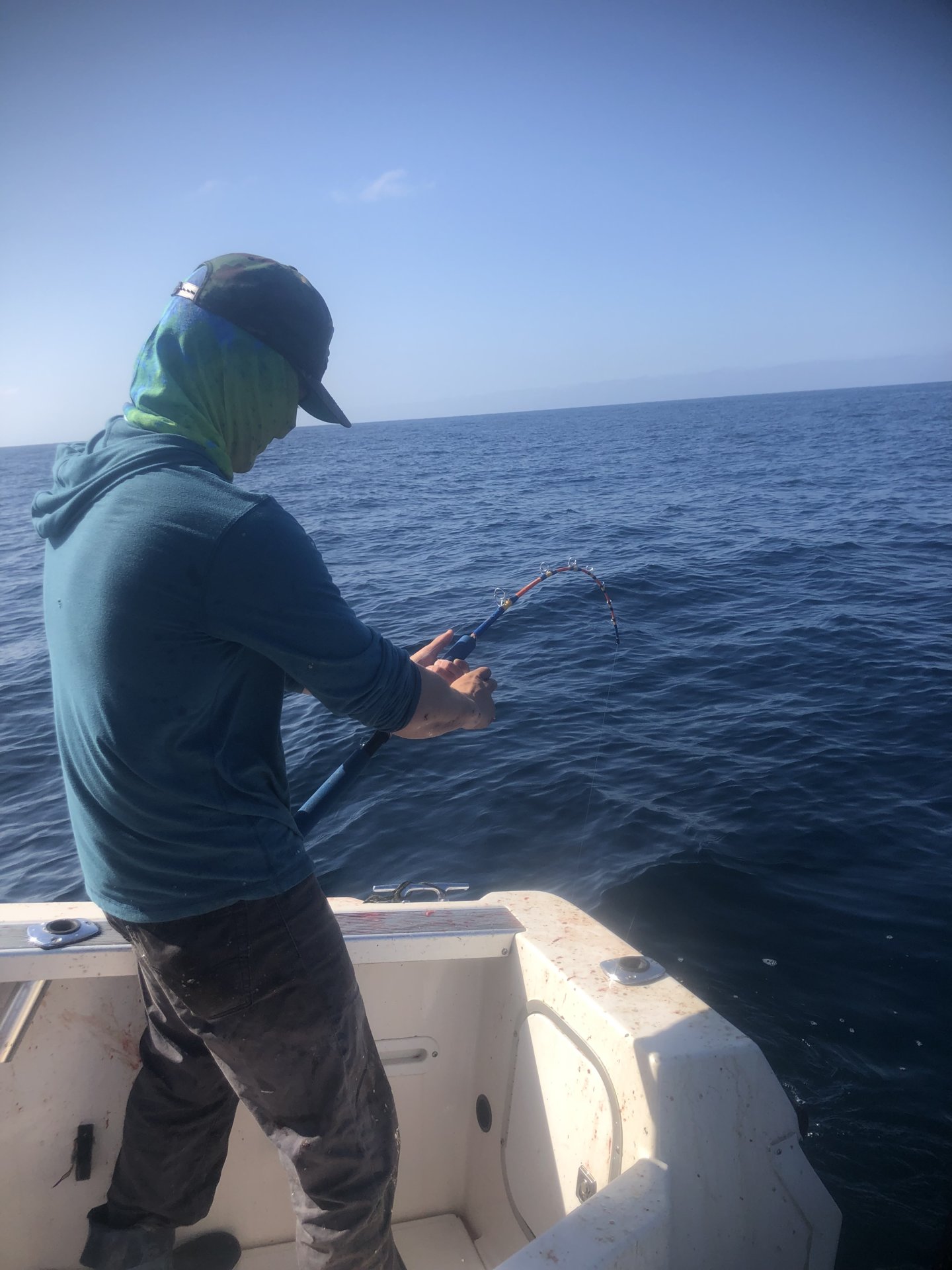 Been teaching my 21 year old about Private Boat Offshore Fishing. So when he asked me last night, “where are we going?” I told him, it was up to him to decide.....That he was the Skipper of this trip!

Launched SI Boat ramp at 4:00am. There was only one boat already getting bait at the Bait Barge so that was a good sign.

We rounded PL a little before 4:30am, to my surprise, he said he was OK to drive out. This was the first time that’s ever happened. He usually sleeps on the way out.....Another something different about this trip.....We usually get burritos on every trip......This trip I picked up from Sprouts a couple “Chicken Pesto Sandwiches on Ciabatta.” So before my nap, we downed a half a sandwich. Both of us agreed how good this tasted and both of us mentioned we were “burned out on Burritos.”

I couldn’t sleep last night. And the chance to sleep on the way out was welcomed. Ironically, my son gets too “jacked up” and doesn’t sleep before a trip.....last night while getting the boat ready for the trip, my son’s legs got attacked by mosquitoes. So he took two Benedryl and got 5 hours of sleep......Good for me.

I wasn’t sure where we were going as I went to sleep in the Cuddy.....When I awoke in gray-light we were stopped on the 302 and he already was dropping a “flat-fall.” He said we were metering fish...... so I dropped a flylined Dine in the water.....We couldn’t get a bite so by sunrise we started to troll. He told me to tie on a Red/Pink Feather. He said, “I don’t care if we catch Skippies, I wanna catch fish.” So I tied on two.

So without telling me or telling me why, he was following a temperature break. It wasn’t until we were heading for home did I realize we headed SE from the 302......

We saw the “Old Glory.” Trolled by at a distance. Then within sight of the “Intrepid,” our starboard outside troller goes off.......boom skunk off as he bounced a 15lb Yellowfin. As I reeled in the trollers, I threw a lot of whole and chunk sardines. Bendo, his bait stick goes off. #2......then he sees a boil and casts out his “Coltsniper” on his “Pinhead” with a “500 Tranx.” I’m thinking , “Dang....that kid is on fire.” He lands #3 YFT.

Up to this point, we have zero pictures and zero video, so while I’m waiting to gaff his fish, I’m filming with my IPhone in my left hand......My son, of course says “don’t drop your IPhone.” I get some footage and because I’m trying not to lose my phone in one hand and gaff with the other....I make a horrendous “gutt-gaff” in the belly.....Boom-chaka-lakka, we have limits for 2......We look at the time.....10:11am as we count the haul making sure we only have 10......

So, in summary. I got a beatdown.

We decided not to try for Skippies or Yellowtail and headed for home......

A very awesome Parker Skipper(with limits) was blasting over the radio 22/30 too.....As we left the area it looked like 20 Private Boaters made it there at high speed. And about 4 Sporties.....

I decided to write this recap (sorry for the novel) because I am proud of my boy. I told him on the way in that he could take the boat out without me.....He gave me the short list of only 2 friends he would ever consider and the reasons why.....I also was inspired to write this because after looking where 22/30 is I had to ask......”Why did you decide to troll SE of the 302? His reply, “I was following the temperature break.” I asked, “did you follow your gut?” He said, “Yup!”

At that I immediately told him how proud I was and how impressed I was of him.......

Nice report, nice story! Congradts! Hopefully he cleaned fish while you did the boat/gear. Nice to have someone related to fish with!
Toggle signature
All bleeding stops eventually.
Upvote 0

You taught him well Pop, sounds like a chip off the old block to me.
Toggle signature
The rush of battle is often a potent and lethal addiction, for war is a drug
Reactions: Geo-Fish and karlk1125
Upvote 0

Awsome job way to spend quality time with your boy that's what it's all about!!
Reactions: Hardcor and Geo-Fish
Upvote 0
T

Awesome report and writeup! I love that rod your boy is using! My all time favorite.
Toggle signature
Some times killing fish is like masturbations, you just don't talk about it. -AlbacoreShuffle

Nice job with your Son. There is nothing better than when we realize they have grown up.
Reactions: Geo-Fish
Upvote 0

Great report. Remindes me of my son and i. Same age deference.... It just happened a few years earlier and we are still doing the same thing now. Memories forever!!!!
Reactions: Geo-Fish
Upvote 0

Awesome report. Thanks for sharing. Your son is ready.
Reactions: Geo-Fish
Upvote 0

Yeah I know the feeling my boy (23) has schooled me a couple of times in the last couple years, we go back and forth. I’m really proud of him, I respect his opinion on the bite and techniques. Way better than just big fish for me.
Reactions: Geo-Fish
Upvote -1

Yeah. I bought that Kencor for him when he was 9....12 years later and it still kicks ass. We bring it on every trip because it’s our “lucky rod.” It’s only 4’9” but it can handle the fish. The all fiber glass bends 180. Only issue is it’s shortness when the fish dive under the boat or in that instance around the outboard. I like that picture because he handled that situation great. Helps to have long arms.....

bcause said:
Yeah I know the feeling my boy (23) has schooled me a couple of times in the last couple years, we go back and forth. I’m really proud of him, I respect his opinion on the bite and techniques. Way better than just big fish for me.
Click to expand...

I told him last year when we repowered it, the last engine lasted 22 years......This engine, if we take care of it should be around another 22 years when I’m long gone, and you’ll probably get the boat, since you’re the only son that fishes.

He runs in the house excitedly and tells my wife, “Mom, when dad dies, I’m gonna get the boat!”

Easy tiger, I’m not dead yet!

I had 2 Pangas but sold them like a dumbass, great to see you still fishing yours!
Upvote 0

Geo, That was such an awesome read.
I'm right there with you, to see your young man take the helm is a step with him becoming a man on the water and a contributor to our community l. You've raised him well.
I stand in awe to see see our youth develop into fine fishermen as we pass on our wisdom.
You gotta be so proud of him.
I've watch me 16 year old progress with the responsibilities of the boat, taking it off and on the trailer.
Post wash down and prep prior to launch.
Hell, he changed the thermostat and oil.
Good job bringing him up properly, on and off the water!
Reactions: Hardcor and Geo-Fish
Upvote 0

Thanks for the report.
Upvote 0

We’re gonna need a Bigger Bag! Especially for a monster Cow if/when we catch one.....
Upvote 0

thanks for the report and the story!!! right on man glad you got em with the kid!! awesome!
Upvote 0
Show hidden low quality content
You must log in or register to reply here.