Offshore 9/2 On Tribute Overnight, About 30 mi SW of SD

My brother & I went out on the Tribute hoping for some dorado. The Seaforth Landing staff told us to bring 20, 30, and 40 lb setups which made sense given the great dorado bite. When we boarded, the captain had a different plan; we'd be night jigging for bluefin by midnight. There was an ah-shit moment as we had no 60 lb or 80 lb rigs but at least we had two 50 lb two-speed setups, and that would just have to do. As it turned out, that was good enough as the bluefin were all 25-60 lb, most being 30-40 lb.

On about the third drift, I hooked into a 35 lb bluefin with a knife jig. It took less than ten minutes to bring him in. Two hooks were in his mouth and two hooks in his midsection. I suppose he just said oh hell and gave up. My brother had never done this kind of fishing and he quickly picked up the how-to but by morning, we only had about 10 bluefin, and he'd not been among the lucky few.

At sunup we started looking for kelps. Thinking we'd catch dorado or maybe yellowtail next, I switched to my 30 lb setup. My first bait went straight down off the stern and I was about to pull it up when a 42 lb bluefin snatched it. Instead of taking me around the boat, he took me from stern to bow and back three times on the same side everyone was fishing, then back to the bow before making a run for the horizon and taking more than half my line. A crewman tightened my drag some, and we settled into a tug of war. Then another crewman tightened my drag some more.

I was using a stiff 8 ft Okuma graphite rod, a Daiwa 20H, and 400 yd of 30 lb braid tied to about 3 ft of fluoro leader, so I had no stretch in the setup. No matter what I did, each beat of the fish's tail would rotate the spool 5 or 10 degrees, but at times I turned the fish's head and got several handle turns of pure progress. I was seemingly winning but the fish was the better athlete. After being on this fish for at least 30 minutes, getting almost all my line back, and maybe 10 ft before color, my left arm and back gave out. It was not my plan to fight a 42 lb bluefin on this setup. Anyway, the fish just out-pulled me. A crewman offered to finish it and got the fish to gaff. Several times he pinned the line with his left hand to the foregrip; I was sure the line would break but it didn't. I don't recall the line getting rubbed on the boat, but I checked the fluoro leader afterward, and it felt like it had been run over a rusty pipe several times. Also, when I turn the handle in freespool, the spool now turns a little, so I think something in the reel might be bent.

These were not mine - wait, I take that back - these were the first three fish caught on the jig at night. The one on the left with the gash in its midsection was mine. For some reason there was so much blood coming from its gills, the deckhand shoved the hose in its mouth to flush it out. This pic was taken after it was washed clean. 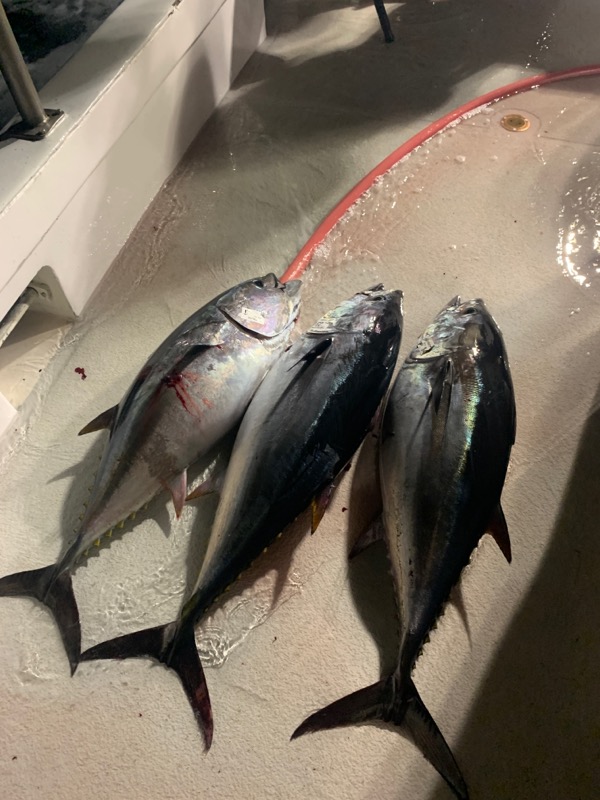 It was 7:30 am, and I had my two, so I spent more time helping my brother with hooking live bait, flylining, and line control. Like I said, he's a fast learner, and I could see he was getting many strong swimming baits in the water. I was trying to hook another fish as well and hand it off, but unfortunately, we both had no luck the rest of the day. To top it off, he caught a 2/0 circle hook in the hand in the afternoon when his rod and the deckhand's bait scoop collided as the latter was pitching chum. It was deep into his little finger between the palm and first knuckle; the point possibly being in the knuckle and the barb possibly being around a tendon. Anyway, the captain was skeptical about trying to remove it on the boat, so he bandaged it up, my brother kept fishing, and he had it removed at an ER later in the evening.

I gave my brother all the fillets from one of the fish; I'm not sure which one, and I kept the filets from the other fish plus the collars & bellies. Overall, I think the sight of all the bluefin hitting the deck got him interested enough, he expressed interest in giving it try again another time.
Last edited: Sep 5, 2022
Reactions: Radcru, Cubeye, Cbaldwin and 6 others
Upvote 0

Thanks for sharing.
Reactions: Robmhc
Upvote 0

I had a similar experience with a bluefin like you did. About the same size on a Calstar 800M and a Torium 20. I've killed bigger tuna on it before, but I got mollywopped at deep color and could not budge it. Crew ended up killing it for me. Not sure if the fish are on steroids now or what
Reactions: pacificscout and Fishmeluck
Upvote 0

Nice post. On Sunday night we had the tribute right next to us after our cap called him to come get some BFT. It was about 6 pm. we were on the Islander.
Toggle signature
-out
Reactions: Steve2560 and Fishmeluck
Upvote 0

I always bring a heavy rig. Always. Worse thing that happens is I never use it and people who don't know give me a few funny stares...
Reactions: Fishmeluck
Upvote 0
Show hidden low quality content